Here at LSOZI, we are going to take off every Wednesday for a look at the old steam/diesel navies of the 1859-1946 period and will profile a different ship each week. These ships have a life, a tale all of their own, which sometimes takes them to the strangest places.- Christopher Eger 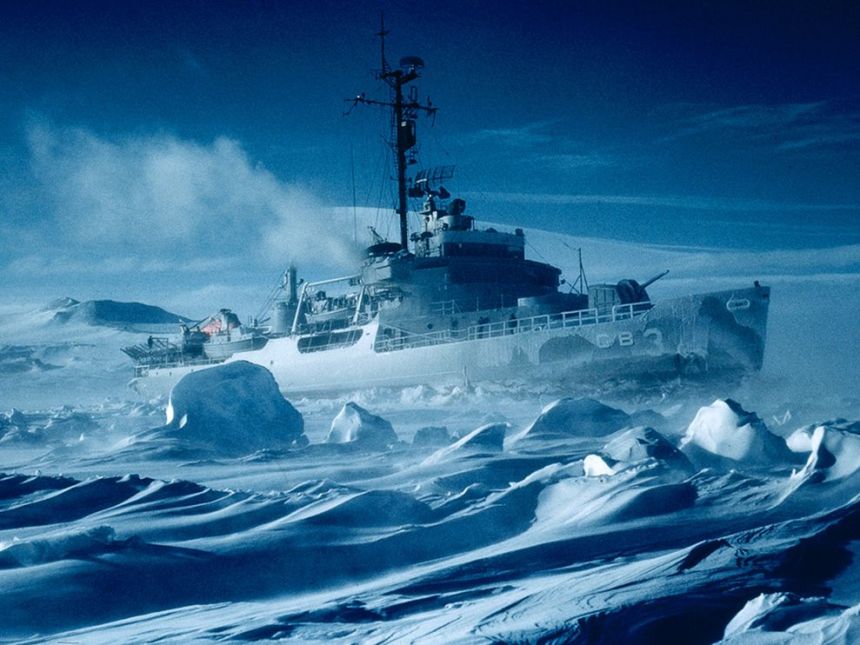 U.S.S. Atka stands in McMurdo Sound to keep the channel open for Operation Deep Freeze supply ships and the evacuation of the last summer residents.

With things starting to get colder, I figured we should go with an icebreaker. Here we see an amazing image of the Wind-class polar icebreaker USS Atka (AGB-3) holding the line at McMurdo Naval Station in Antarctica.

When World War II started, the Navy was up to the proverbial frozen creek as far as icebreaking went. While some foreign powers (the Soviets) really liked the specialized ships, Uncle Sam did not share the same opinion. However, this soon changed in 1941 when the U.S., even before Pearl Harbor, accepted Greenland and Iceland to their list of protected areas. Now, tasked with having to keep the Nazis out of the frozen extreme North Atlantic/Arctic and the Japanese out of the equally chilly North Pac/Arctic region (anyone heard of the Aleutians?), the Navy needed ice-capable ships yesterday.

The old (read= broken down) 6000-ton British-built Soviet icebreaker Krassin was studied in Bremerton Washington by the Navy and Coast Guard. Although dating back to the Tsar, she was still at the time the most powerful icebreaker in the world. After looking at this ship, the U.S. began work on the Wind-class, the first U.S. ships designed and built specifically as icebreakers.

Set up with an extremely thick (over an inch and a half) steel hull, these ships could endure repeated ramming against hard pack ice. Just in case the hull did break, there were 15-inches of cork behind it, followed by a second inner hull. Now that is serious business. At over 6000-tons, these ships were bulky for their short, 269-foot hulls. They were also bathtub-shaped, with a 63-foot beam. For those following along at home, that’s a 1:4 length to beam ratio. Power came from a half-dozen mammoth Fairbanks-Morse 10-cylinder diesel engines that both gave the ship a lot of power on demand, but also an almost unmatched 32,000-mile range (not a misprint, that is 32-thousand). For an idea of how much that is, a Wind-class icebreaker could sail at an economical 11-knots from New York to Antarctica, and back, on the same load of diesel…twice. 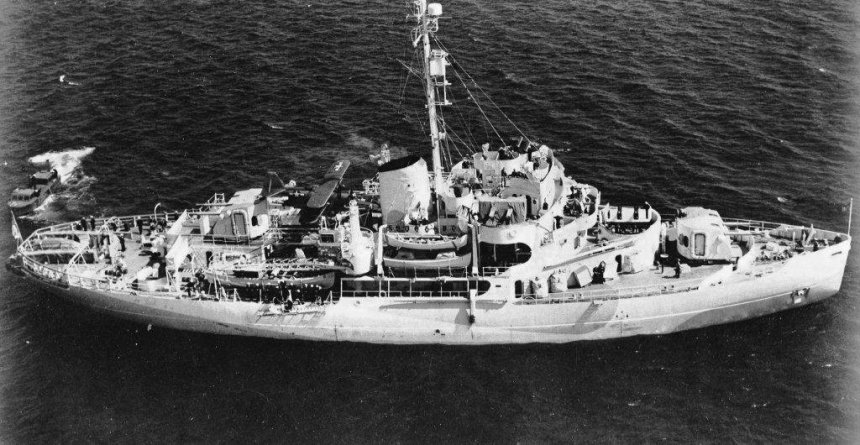 USCGC Southwind (WAGB-280) at anchor probably in the vicinity of San Pedro, CA., in July 1944 sometime before or after her commissioning on 15 July 1944. Note how beamy these ships were. The twin 5″ guns make her seem extremely well-armed. Also, note the J2F Duck seaplane perched amidships. Photo by Navsource

To help them break the ice, the ship had a complicated system of water ballasting, capable of moving hundreds of tons of water from one side of the ship to the other in seconds, which could rock the vessel from side to side in addition to her thick hull and powerful engines. A bow-mounted propeller helped chew up loose ice and pull the ship along if needed.

With a war being on, they just weren’t about murdering ice, but being able to take the fight to polar-bound Axis ships and weather detachments as well. For this, they were given a pair of twin 5″/38 turrets, a dozen 40mm Bofors AAA guns, a half dozen 20mm Oerlikons, as well as depth charge racks and various projectors, plus the newfangled Hedgehog device to slay U-boats and His Imperial Japanese Majesty’s I-boats. Weight and space were also reserved for a catapult-launched and crane-recovered seaplane. Space for an extensive small arms locker, to equip landing parties engaged in searching remote frozen islands and fjords for radio stations and observation posts, rounded out the design.

In all, an impressive eight Wind-class ships were built. USS Atka, named appropriately enough for the largest island in the Andreanof Islands group of the Aleutian Islands of Alaska, was the third of these. Laid down at the Western Pipe and Steel Company shipyards in San Pedro, California, seven months after Pearl Harbor, she was actually commissioned as USCGC Southwind (WAG-280) in the service of the US Coast Guard on 15 July 1944. Her wartime service with the Coast Guard, though short, was memorable.

Assigned to the Greenland Patrol, she helped fight a little-known battle remembered as the Weather War. This campaign, though not very bloody, was an enduring cat and mouse game between U.S. maritime assets and those of the Germans, who set up weather stations along the remote coasts of Greenland, Canada, and Spitsbergen to get vital met data on pending fronts headed to Europe from the Arctic. Remember this was before the days of weather satellites. As such, one of the most knowledgeable oceanographers in the service, Commander Richard M. Hoyle, commanded Southwind.

While on the Greenland Patrol, Southwind, in conjunction with the USCGC Eastwind, one of her sisterships, trailed the German Naval Auxiliary ship Externsteine, an armed and converted trawler. After a short skirmish in the ice, in which Southwind illuminated the German ship with her searchlights, the trawler surrendered and was boarded by USCG landing parties. Christened the USS Eastbreeze, a salty prize crew made up of Eastbreeze and Southbreeze coasties took the captured ship in to Boston.

The Germans chased from the Arctic, and the war winding down, Southwind was decommissioned 23 March 1945, largely disarmed, and loaned to the Soviets two days later as the country was, ironically, short on modern icebreakers. She served them well under the name Kaptian Bouleve then later Admiral Makarov for almost five years, only being returned to U.S. service to be commissioned as the USS Atka (AGB-3) just in time for Korea. 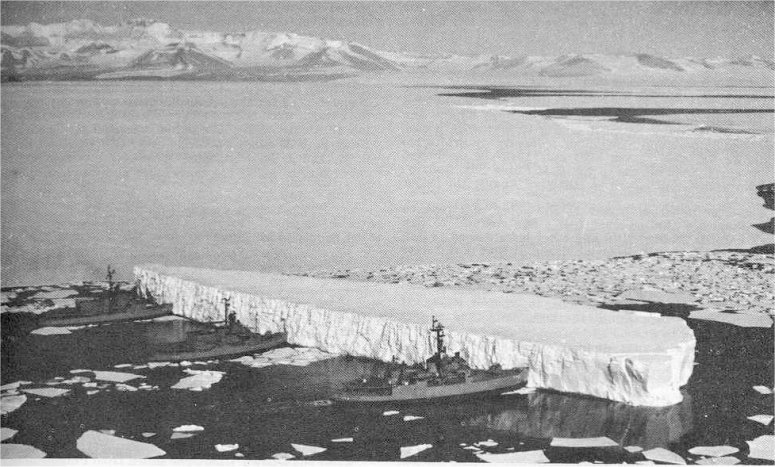 From left to right, USS Burton Island (AGB-1), USS Atka (AGB-3), and USS Glacier (AGB-4) pushing an iceberg out of the channel near McMurdo Station, Antarctica, 29 December 1965. US Navy photo from DANFS.

As Atka, she sailed from Boston for 16 years as part of the Atlantic Fleet. During this time, she made at least three polar trips and was a frequent visitor to Thule Air Force Base, Greenland, breaking ice on the regular resupply runs there.

Then in the 1960s, the Navy decided it was getting out of the icebreaker business and transferred the Atka back to its original owners, the Coast Guard. Not one to rest on a Navy-issued name, the USCG returned to their original moniker for the ship, Southwind, when she was brought back into the fold on Halloween Day 1966. “Trick or Treat” indeed (and another reason for this to be an October Warship Wednesday!).

USCGC Southwind from the Southwind 280 Association

The “Polar Prowler,” now in her 20s with her last major refit back in 1951, continued to serve hard time in the frozen Polar Regions, as is the nature of her breed. 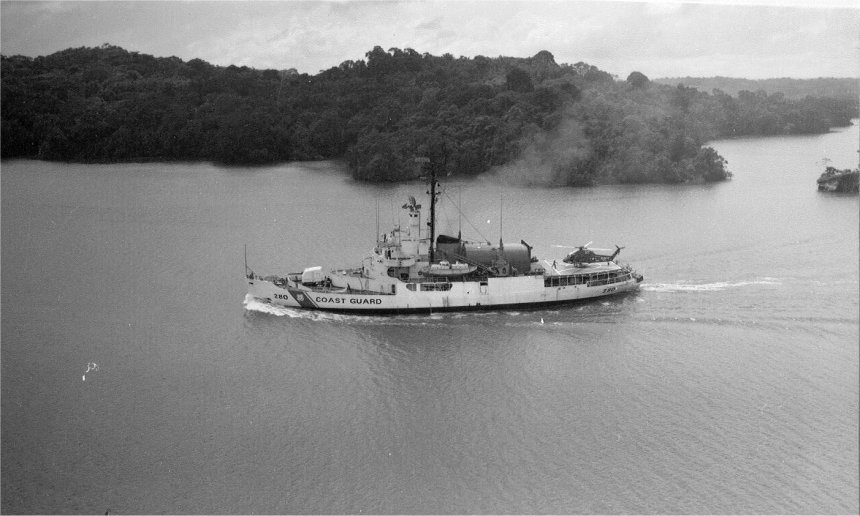 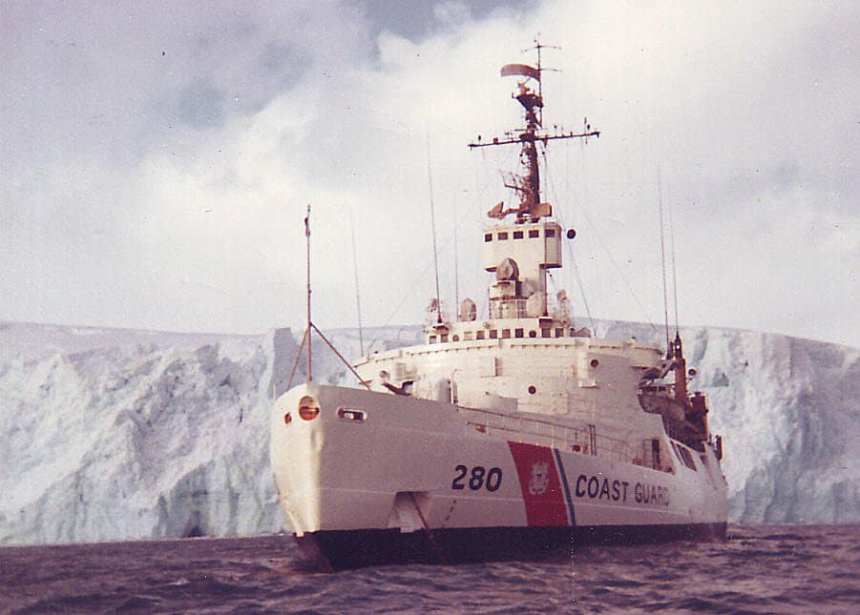 In the next decade, she made at least three Antarctic trips, and six Arctic ones, including a rare 1970 port-call in Murmansk, her old home while in Soviet service. While there, she picked up a NASA Apollo program unmanned training capsule (Boilerplate #-1227), that was lost at sea, found by a Hungarian trawler, then transferred to the Russians, and later collected by the Southwind.

While in Murmansk, from 4 to 7 September 1970, over 700 local citizens visited the ship. CAPT. Cassidy paid homage to Soviet and American dead at a local cemetery where American and other Allied sailors killed near Murmansk were buried. Also, the Soviets returned an Apollo training capsule (BP-1227) that they had recovered at sea. Apparently the U.S. Air Force Aerospace Rescue and Recovery personnel who were using the 9,500 pound capsule for training but lost it at sea near the Azores in February, 1969. It was recovered by a Soviet fishing trawler. Southwind, after first sustaining a “bump” by a Soviet icebreaker while departing Murmansk for home, carried the capsule back to the U.S. and deposited it at Norfolk before ending her cruise at Baltimore on 17 November 1970.

USCGC Southwind (WAGB-280) crew members chip away at the ice while in Baffin Bay, November 1970. Note the Apollo capsule on the deck. USCG Photo scanned from Southwind’s Arctic East 70 scrapbook.

Finally, showing her age and being replaced by the new 399-foot Polar class cutters, she was decommissioned in 1974 and sold for scrap two years later. Today all that remains of her is the light that is kept burning by her veteran’s association.

In 2007, she was memorialized in an official USCG painting, “WAGB Southwind” by Thomas Carr, where she is depicted in the red-hull that she had only briefly towards the end of her career.

Her seven sister-ships have likewise all been retired and scrapped. However, her half-sister, the USCGC Mackinaw, which broke the ice on the Great Lakes for six decades, is a floating museum in Michigan, and her grandfather, the old now 98-year old Krassin, is preserved at Saint Petersburg. 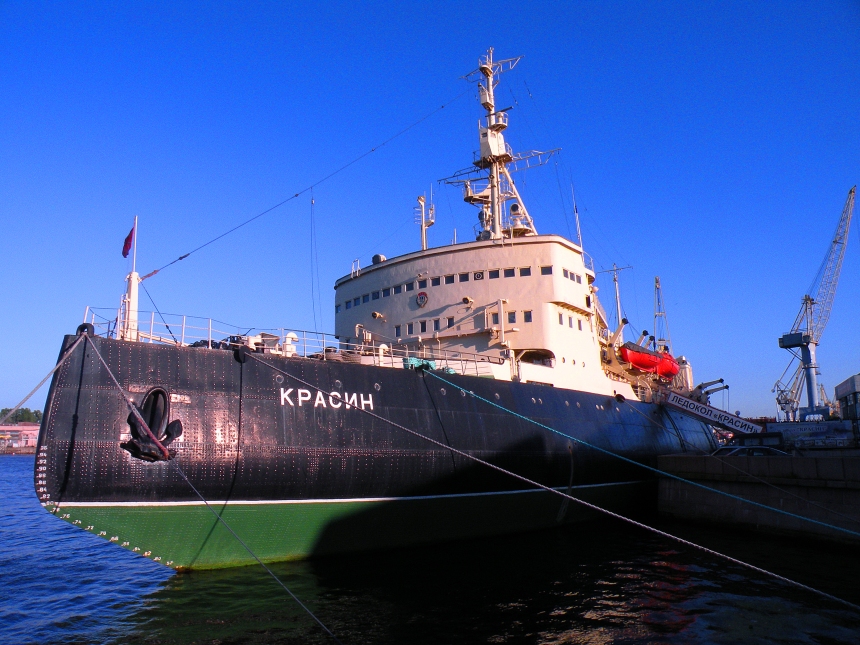 Also, Apollo BP-1227 is on display at the Grand Rapids Public Museum, where it has been since 1976, courtesy of a cruise on the Southwind, although the capsule continues to be a subject of much discussion and conjecture in the NASA fanboy community. 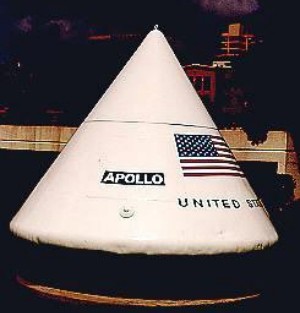