Posted on April 1, 2015 by laststandonzombieisland 4 comments

Here at LSOZI, we are going to take off every Wednesday for a look at the old steam/diesel navies of the 1859-1946 time period and will profile a different ship each week. These ships have a life, a tale all of their own, which sometimes takes them to the strangest places. – Christopher Eger.

Here we see the Italian-made Pisa-class armored cruiser Georgios Averof of the Royal Hellenic Navy as she appeared in 1913, shortly after almost single-handedly routing the entire Ottoman fleet the year before.

In the early 20th Century, Southeastern Europe, popularly known as the Balkans, was a powder keg of a number of upstart countries living in the shadow of the “sick man of Europe”– the Ottoman Empire. With more than a century of low-key warfare between the Greeks, Romanians, Serbs, Bulgars, Croats and so on to try to break free from the Sultan and his court, by about 1900 the lines had been drawn between the Turks and the Greco-Slavic nations. Combined, the Balkan countries could cough up nearly a million men under arms– more the enough to take on the Turks. However, they could not match the Turkish Navy in either the ancient Adriatic, Aegean, Ionian, Med, and Black Seas.

That’s where Greece, who had a small army but an excellent naval tradition, stood alone against the Turks.

Between 1879 and 1914, the Royal Hellenic Navy was transformed into a modern force, picking up battleships and destroyers from Italy, France, the UK, and the U.S.

However, their French-built pre-dreadnoughts: Hydra, Spetsai, and Psara, were exceptionally small at just 5,300-tons and were lightly armed (3x 10-inch guns) and slow (16 knots). After winning the Greco-Turkish War of 1897, the Greeks went shopping for a new mega-ship with a 2.5 million gold franc donation from Greek philanthropist George M. Averoff.

George M. Averoff, the man. He left the Greek government a fortune in his will and they went warship shopping

Across the Adriatic, they inspected the Italian (by no less of a naval engineer than Giuseppe Orlando) Pisa-class “second-class battleship” and fell in love. These 10,000-ton ships, technically armored cruisers, could break 23-knots through the power of 22 Belleville boilers and carried a quartet of 10″/45 cal guns backed up by eight 7.5-inchers in four twin turrets on the centerline and more than a dozen smaller anti-torpedo boat pieces. Sheathed in up to 7-inches of steel plate, they could fight off ships their own size and outrun most that were larger.

The Italian cruiser Pisa or the Regina Marina, the sister of the Greek Averoff. (Click to big up)

Although they only needed a crew of about 700, they also could accommodate a battalion of naval infantry if needed for amphibious landings which is key in the far-flung and disputed islands that the Greeks cruised in. Not perfect when compared to British and German ships of the day, certainly, these cruisers were still better than anything the Turks had at the time. Better yet, the Italian Navy had the third Pisa that they had ordered but were going to cancel– talk about timing.

Swapping out the 10″/45 cal guns for a set of much more modern British-made 9.2″/47 (23.4 cm) Mark X breechloaders, (which had been the standard at the time of the Royal Navy’s armored cruisers), the Greek “battleship” Georgios Averof was laid down at Orlando, Livorno in 1910. With tensions between the Balkan countries and the Turks ramping up (the Italians themselves went to war with the Ottomans in 1911 over Libya), construction progressed rapidly and just 15 months later the Averof was commissioned on May 16, 1911, and was made fleet flagship. 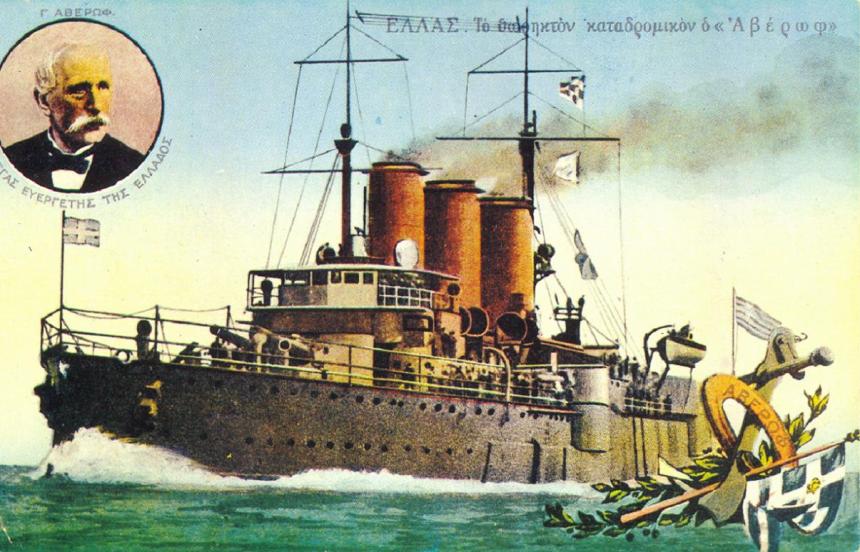 Postcard of her as completed. Note the very Italian scheme

When war came the very next year, the Averof led the older French battleships to first blockade and then engage the Turkish fleet off the Dardanelles. There, on 16 December 1912, the four Greek capital ships met four elderly Ottoman battleships and the largest battleship fight to take place not involving “Great Powers” occurred.

Elli naval battle, painting by Vasiileios Chatzis. Charging ahead to cut off the Ottoman line

Borrowing a page from Admiral Togo’s 1905 Battle of the Tsushima Straits, the Averof raced ahead all alone at over 20-knots and crossed the Turkish T, taking on each of the enemy ships single file.

While the casualties were minimal, the Turks ran after Averof‘s big British 9-inchers hammered the flagship Barbaros Hayreddin (the old German SMS Kurfürst Friedrich Wilhelm) enough to where they figured that it was either shook and jive or sink. This sharp scrap is remembered in Greece as the Battle of Elli.

Averof entering the port of Lemnos after a patrol, guns point towards the camera. April 10, 1913.

Between the two battles, the lucky Averof was hit a total of four times by Turkish shells and suffered just three casualties. It was her guns that by large part helped win the First Balkan War. 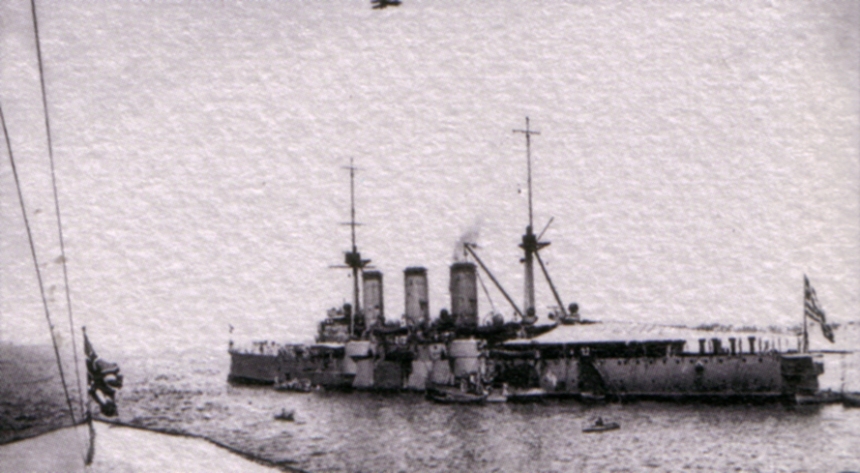 Although Greece eventually joined the Allies in World War I, she saw little service. However, across the Adriatic, her sistership, the Italian cruiser Amalfi, was torpedoed by the Austria-Hungarian submarine U-26 and sank in 1915.

Painting of the Greek Battleship Averof in Bosporus, Hagia Sophia in the background, in 1919

After the war, she became the first Greek warship to enter Constantinople as part of the Allied victory mission to that town and– soon enough — was back in the fight against the Turks in 1919 during the Greco-Turkish War where she was used to help evacuate a defeated Greek Army.

In addition, she helped safeguard the withdrawal of the White Russian exiles after the Russian Civil War, reportedly exchanging a few rounds with the Reds.

In the 1920s, as one of the last armored cruisers around (most had been mothballed, replaced by more modern designs), she was upgraded in France where she lost her obsolete torpedo tubes and half of her low-angle 3-inch guns in exchange for a decent battery of high-angle AAA weapons. At about the same time her final sistership, the Italian cruiser Pisa, was relegated to a training status in 1921 and was eventually scrapped by the Depression.

After that, Averof was the sole remaining member of her class afloat.

Averof after her refit

By WWII, she had been downgraded to the third most powerful Greek ship, after President Wilson had sold the Greeks the battleships USS Mississippi and Idaho (who served as the Kilkis and Lemnos respectively). Those American ships, though unwanted by the U.S. Navy, at 13,000-tons and with a quartet of 12″/45 and sixteen 7 and 8-inch guns, were a good deal better armed.

Nevertheless, when the next world war came to Greece, both the Kilkis and Limnos were sunk by Hitler’s Luftwaffe while at anchor yet the 30-year old Averof was able to beat feet across the Med with three destroyers and five submarines to the join up with the British Mediterranean Fleet at Alexandria. 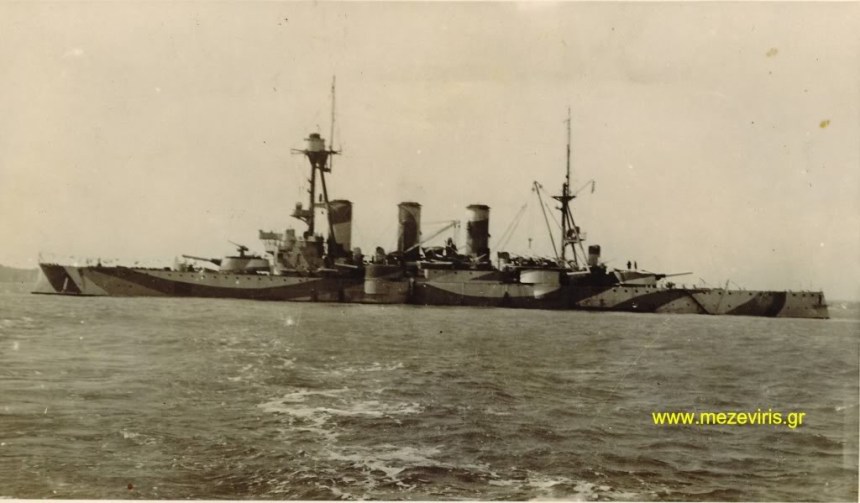 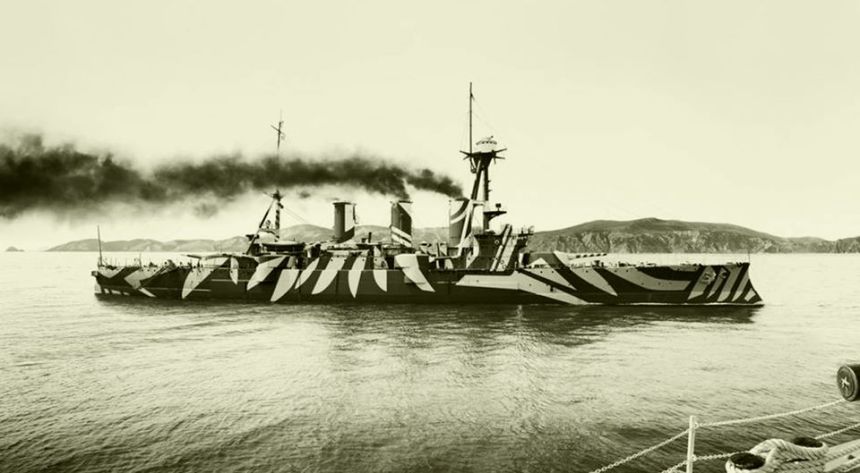 She spent the rest of the war, which if you are keeping count was at least her fifth, in Royal Navy service escorting convoys in the Indian Ocean and hiding from both Japanese and German submarines. In 1944, she carried the Greek government in exile home from London.

Armored cruiser GEORGIOS AVEROF at Piraeus Oct.1944, returning the Free Greek government after three and half year in the exile due to the occupation of the state by the Axis forces

As in the first World War, she came out of the Second unscathed and without losing a single man.

After 41 years at sea, she was the last pre-WWI era armored cruiser in active service in any fleet when she was finally decommissioned August 1, 1952. Held in mothballs for three decades, in 1984 she was overhauled, disarmed, and emplaced as a historical museum ship at Palaio Faliro where she is a popular tourist attraction.

Averof is her latest dry dock. Note the rearward facing 7.5-inch turret to the port side. Averof has four of these mounting a total of 8 guns, which is a significant battery all its own.

Now, still officially on the Greek Navy’s list and with an active duty (if greatly reduced) crew assigned, she will celebrate her 114th birthday under the flag of the Hellenic Navy in May.

Averof is the last armored cruiser in existence above the water. The only two comparable pre-WWI steel blue water ships to her still around, Dewey’s protected cruiser USS Olympia at Philadelphia, and Togo’s pre-dreadnought battleship Mikasa preserved at Yokosuka. 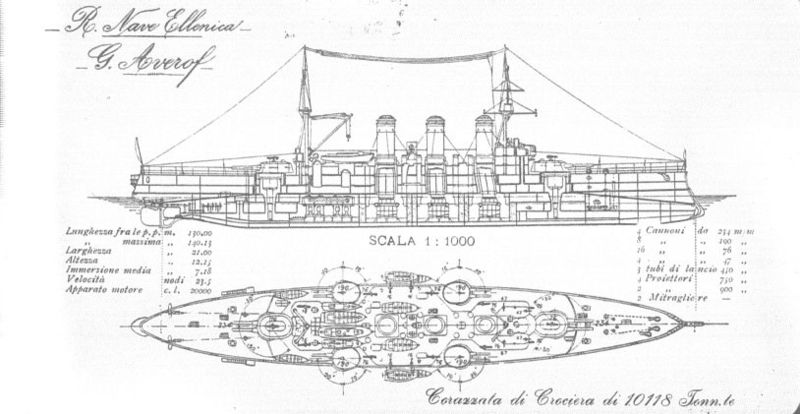 If you liked this column, please consider joining the International Naval Research Organization (INRO), Publishers of Warship International, they are possibly one of the best sources of naval study, images, and fellowship you can find http://www.warship.org/