The Glocks of Greenland

Posted on September 22, 2015 by laststandonzombieisland 8 comments

Greenland, if you don’t count Australia, is the largest island in the world. It is covered largely in deeply frozen polar ice and is one of the most inhospitable places on earth. Part of the Kingdom of Denmark ever since the time of the Vikings, this massive frozen subcontinent is patrolled by a crack team of volunteers from back home in Europe.

The elite Slædepatruljen Sirius (Sirius Sledge Patrol) or informally Siriuspatruljen (Sirius Patrol) is a 14-man Royal Danish Navy unit that conducts long-range reconnaissance and enforces Danish sovereignty in the arctic wilderness of Northern and Eastern Greenland, an area that includes the largest national park in the world.

They are all volunteers who sign up for a two-year tour of duty. If selected they spend the first six-months of their deployment at their home base where they learn their dogs, build their sled (I’m not making this up), and round out their equipment choices while making short trips into the interior.

When the time is right, they pair up and head out on longer patrols, which can cover as much as 2,000 miles, working around the huge island’s coastline. On those deployments, the two sledders are on their own, making reliance on their gear paramount. 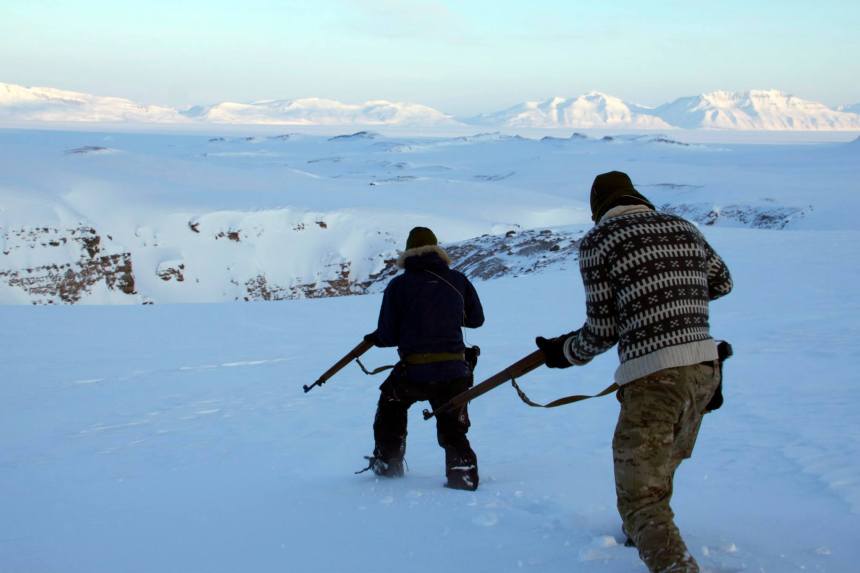 Their longarm of choice to ward off invasion, polar bears, and frozen space aliens found in the ice: the M17/M53 rifle. This weapon is a (slightly) modified M1917 Enfield 30.06 made in the U.S. during World War 1 for the US Army. They were supplied to the Danish military in 1953 (hence the M17/M53 designation) and are still used by both the Danish Home Guard, a more informal version of the US Army National Guard, and other units.

The regular Danish military issues the 7.62x51mm HK G-3 rifle made in Germany or the modified 5.56mm M-16 made in Canada. However, the Sirrus Patrol, who walks a beat on one of the most inhospitable places on earth, still use a bolt-action rifle made nearly a hundred years ago. Why? Because it works and they find it and its 30.06 round utterly reliable in sub-zero nightmare weather.

As a sidearm, each member of the patrol also carries on him at all times an early-generation Glock Model 20 pistol in 10mm Auto. Those 10mm aficionados out there know of its power and mystique, but for those who do not lets break it down.
Back in the late 1970s, a group of firearms engineers working on what would later be the controversial Bren 10 pistol visited firearms guru Colonel Jeff Cooper to get his input on the ultimate handgun round. After several months of talks and some final tweaking by Norma cartridges of Sweden, the Centimeter round was fully developed. As you know, a centimeter is 10mm and by 1983 the 10mm Auto burst onto the scene. Using the case of the old .30-caliber Remington carbine round with a 25mm length, the 10mm Auto remains one of the hottest and most powerful production handgun rounds in history.

In short, this superhot, hard-hitting round is hard to beat. Moreover, coupled in the G20, you get 15+1 rounds good to go with a loaded weight of 39-ounces, which is about the same as an (unloaded) Colt M1911A1 Government, which is the generational equivalent to the Dane’s old Enfield rifles.

Sirius Patrol recruiting ad (in Danish but with English subtitles), in which you will see a Glock 10mm show up several times. If I had to tackle a polar bear with a pistol, the G20 would be high on our list of options…right behind a sawn off double barrel 8-gauge with an underslung flamenwherfer.

But you can’t beat the views of the neighborhood