Posted on September 23, 2015 by laststandonzombieisland 7 comments

Here at LSOZI, we are going to take off every Wednesday for a look at the old steam/diesel navies of the 1859-1946 time period and will profile a different ship each week. These ships have a life, a tale all of their own, which sometimes takes them to the strangest places.- Christopher Eger 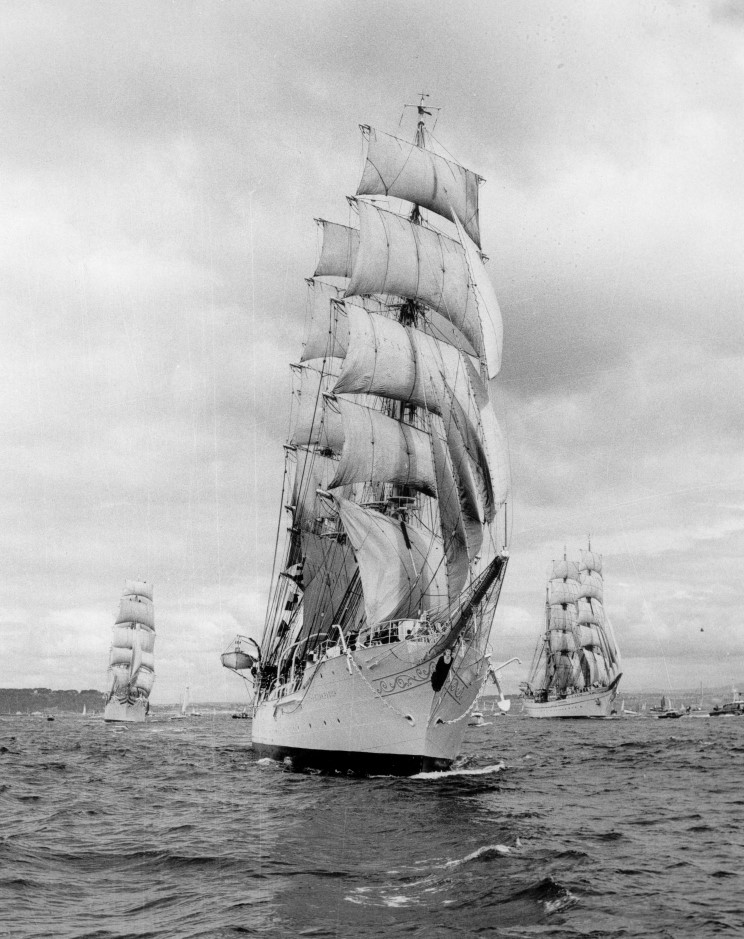 Here we see the fully rigged training ship Sk/S Christian Radich of Norway, doing what she has consistently done best in the past 75 years.  Built in the twilight of tall ships, she was lost in World War II but has since been reborn and has been going strong ever since.

The dream of one Simeon Christian Radich, a wealthy sawmill owner in the Oslo area who left 90,000 Norwegian Kroner to build a training ship that later bore his name, she was built in 1937 at the Framnæs Mekaniske Verksted yard in Norway.

Crafted during the Depression, Christian Radich was impressive at 240-feet overall when measured from stern to the tip of the bowsprit. Carrying 26 massive sails (over 13,000 sq. feet of canvas) when fully rigged, she was constructed with a 220hp diesel “steel topsail” that could chug her along at 8 knots when becalmed. Her main mast, 192-feet long, stood a towering 128 feet above the deck.

Instead of cargo, her holds were designed as dormitories and class rooms for up to 100 youth to be trained in the ways of the sea, carpentry, engineering, and leadership in the Norwegian merchant navy.

Officially owned by the Kristiania Schoolship Association and operated by the Ostlanders Skoleskib, Christian Radich was crewed by a captain, 3 officers, six instructors (typically reserve naval officers), a doctor, ship’s engineer, cook, steward, and 10 merchant sailors. She replaced the 79-year old brig three-master Statsraad Erichsen in service upon her completion and was designed by Commander Christian Blom of the Norwegian Navy.

Taking to sea, she made the 1939 New York World’s Fair with Crown Prince Olav (later King Olav V) aboard and returned home just in time to be taken into the Norwegian Navy as an accommodation ship in September of that year upon the outbreak of war. As she could float in 15 feet of water, could pack 200 hammocks in her berthing areas, and had classroom compartments that could be converted to HQ areas, she made a perfect fit for the task.

In April 1940, the Germans captured Christian Radich at her slip in the Horten Naval Base, her brief and uneventful tenure in the Norwegian armed forces during World War II at an end.

The Nazis seized her, impressed the fine ship into the Kriegsmarine in 1941, and used her as an S-boat mothership first in north Norway (at Skojomen) then in the Baltic. 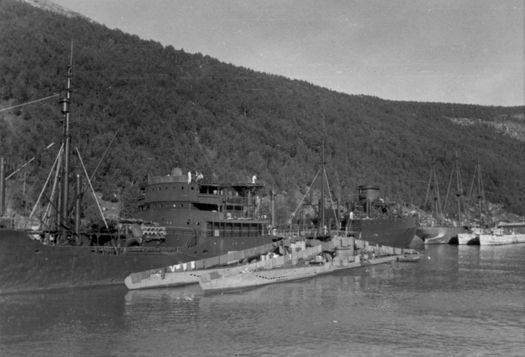 July 1942: In the rear are two S-boats of the 6. SFltl in Skjomen (Ofotfjord near Narvik) alongside a camouflaged “Christian Radich”, in the foreground MT-“Kärnten” with U 408 and U 457 – Picture: Archives E. Skjold

When 1945 came, the Germans stripped her of anything useful and scuttled her in shallow water near Flensburg. Her masts broken at the deck, her fittings gone or loose, she was literally a wreck although only eight years old.

The KSA recovered the stricken vessel in December 1945, paid for a 900,000 Kroner refit at Sanderfjord Naval Yard under the guarantee of Norwegian businessman Alf Bjercke, and once again took to the water training young seamen in 1947, aged 15-25.

Between 1956 and the present day she has participated in scores of tall ship races, placing in an impressive 39 of them, showing she has what it takes to fill the canvas and leave other windjammers to taste her spray.

She starred in a Danish film, “Windjammer, the Voyage of the Christian Radich” racing against the Dane’s school ship Danmark, in which a 19-man film crew lived aboard her for six months at sea.

A beautiful ship, she is a favorite of maritime artists

The Chase by Derek Dubose 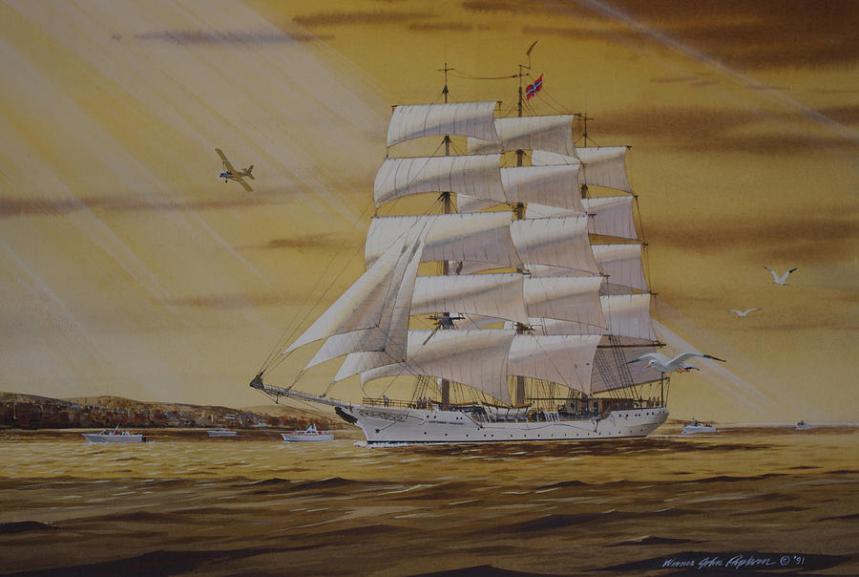 Christian Radich in the Port Of Duluth Painting by Werner Pipkorn

She is currently run by a non-profit, The Christian Radich Sail Training Foundation, who endeavors to keep her at sea as much as possible, training and representing the country. They have a very informative webpage and social media account (from where most of these images originate). 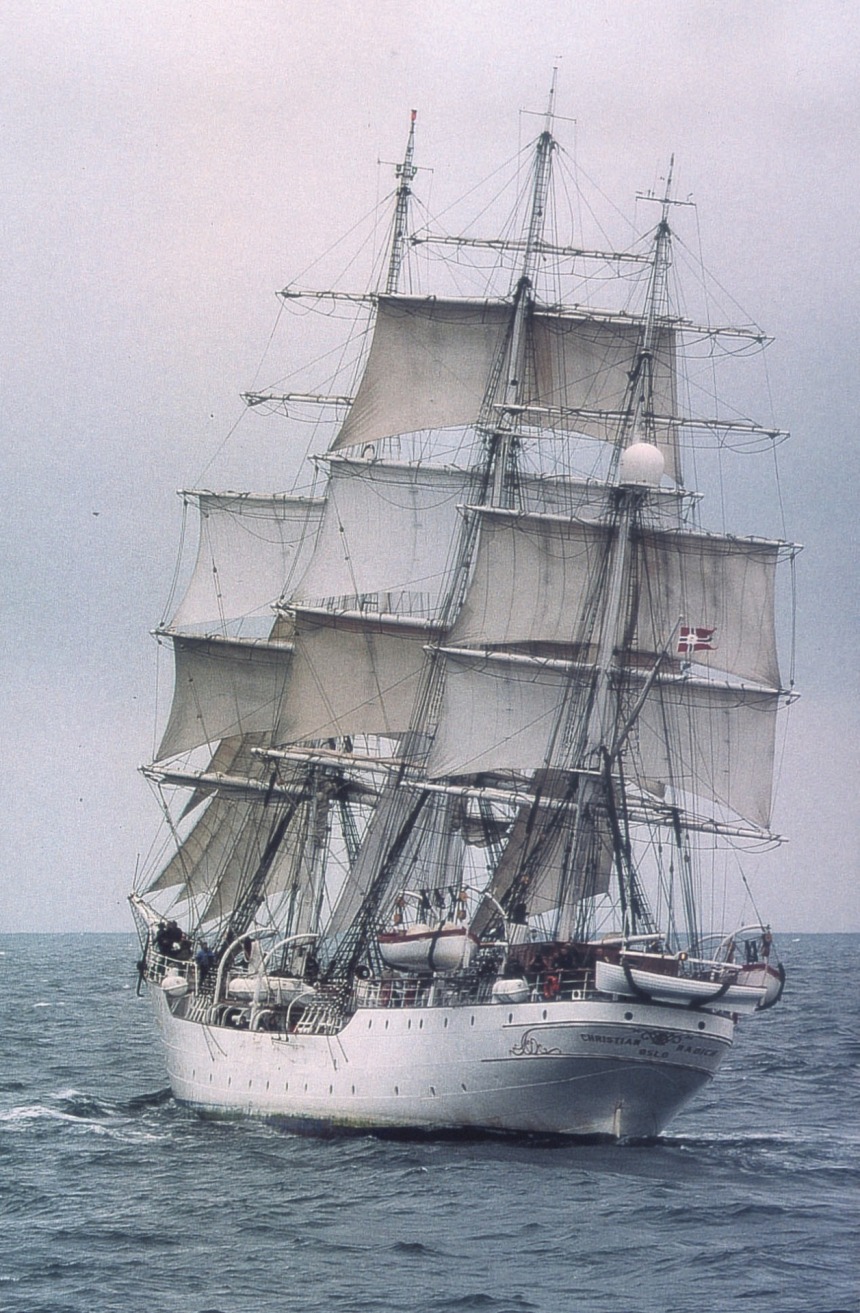 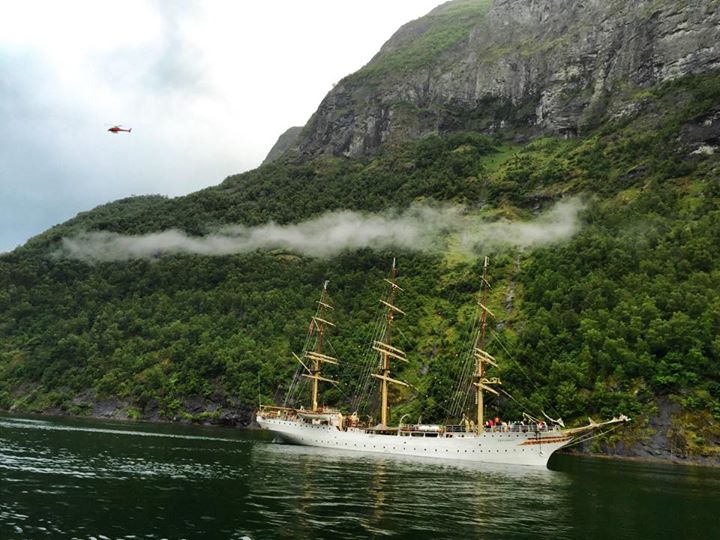 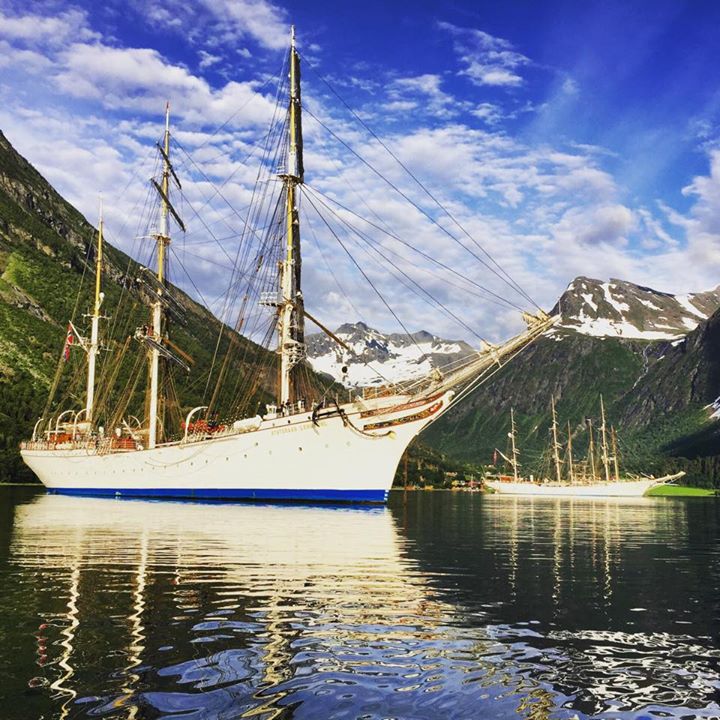 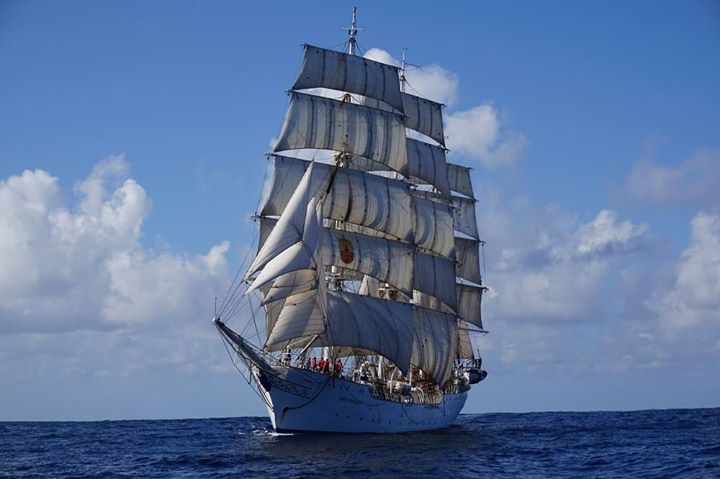 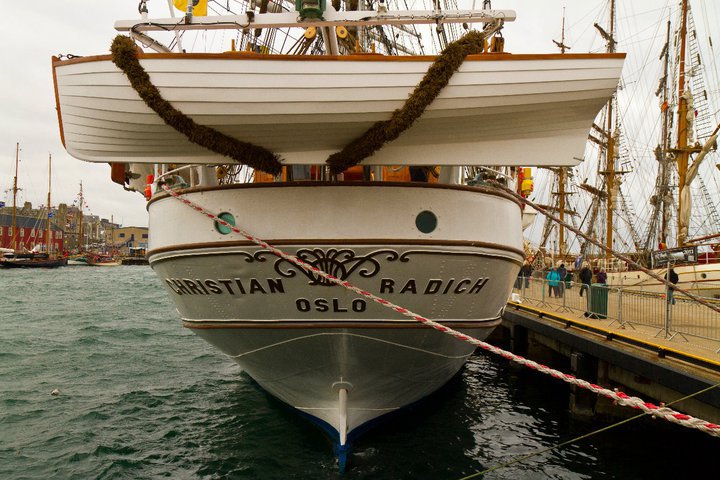 Since 2005, she was used as a school ship for the Navy to train the country’s naval officers as part of the Befalsskolen for Sjøforsvaret program.

This changed earlier this year, as noted by the Foundation:

“We were informed that the Norwegian Navy’s officer school are unable to renew the contract with Christian Radich after April 2015, despite the fact that they are very satisfied with our services. There has been an intensive process to find alternative employment during the winter months. The Foundation offers now training for maritime students at Norwegian Colleges. They will have an apprenticeship on board during the schoolyear 2015/16.”

Still, she has celebrated her 75th year in almost constant service, which means something these days.