Posted on October 21, 2015 by laststandonzombieisland 2 comments 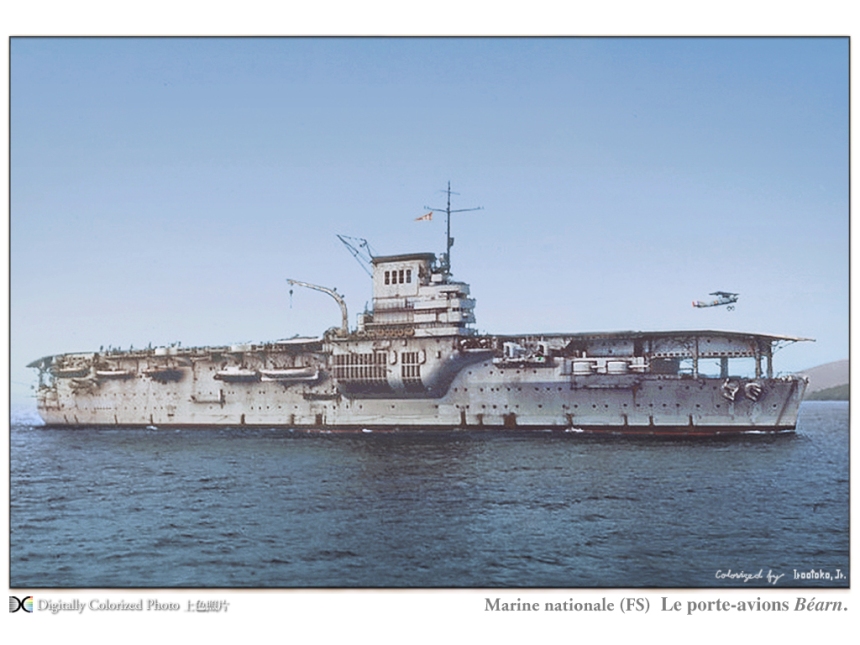 Here we see the French aircraft carrier Bearn, the only one of her kind, in pre-WWII aircraft operations. She was too young for WWI and too old for WWII, but she remained with the fleet for some 50 years.

These new ships, Normandie, Flandre, Gascogne, Languedoc, and Béarn, would carry a full dozen 340mm guns in three quadruple turrets (the French loved that arrangement, using it on all their later battleships) and be powered by a hybrid powerplant of two turbines and two reciprocating engines, each on their own shaft. Insulated by up to 12 inches of armor, they were thought to be comparable to the latest Italian, Austrian, and German designs of the 1911-era and fast enough at 21 knots to make due.

To speed up construction, the five ships were to be built around the country at three different yards with class leader Normandie laid down 18 April 1913 at St Nazaire and her four sisters likewise started over the next eight months with Bearn, begun 10 January 1914 at F C de la Méditerranée, La Seyne, the last of the class.

However, when the Great War began in August 1914, France, allied to the mighty Royal Navy and soon to that of the Italian Regina Marina, was good in the battleship department with both the Austrians and Germans bottled up in their respective harbors and unlikely to sail on Toulon or Brest any time soon.

This meant that the five new battleships were suspended and the first four of their hulls, able to float but not much else, launched to clear the ways for other more pressing projects. Bearn, even less along than the other four, was left on the ways. Several of the battleships’ intended 340mm and 138.6 mm guns were mounted as railway artillery instead and went to pounding the Kaiser’s thick gray line along the Western Front and then lingered as coastal artillery emplacements into the 1940s. (Some of these coastal guns saw action in August 1944 during the Allied invasion where they were fired upon by USS Nevada (BB-36))

At the end of the war, the prospect of a financially strapped France completing five 1911-era battlewagons whose hulls were already covered with enough kelp and sea growth to make an instant reef was slim. In the end, it was decided to scrap the four floating leviathans and launch Bearn‘s own incomplete hull in April 1920 and figure out what to do with her later.

To be fair, the French beat the Japanese and Americans to the punch and started converting Bearn in 1923, with her shakedown complete and entering service with the fleet in May 1928. 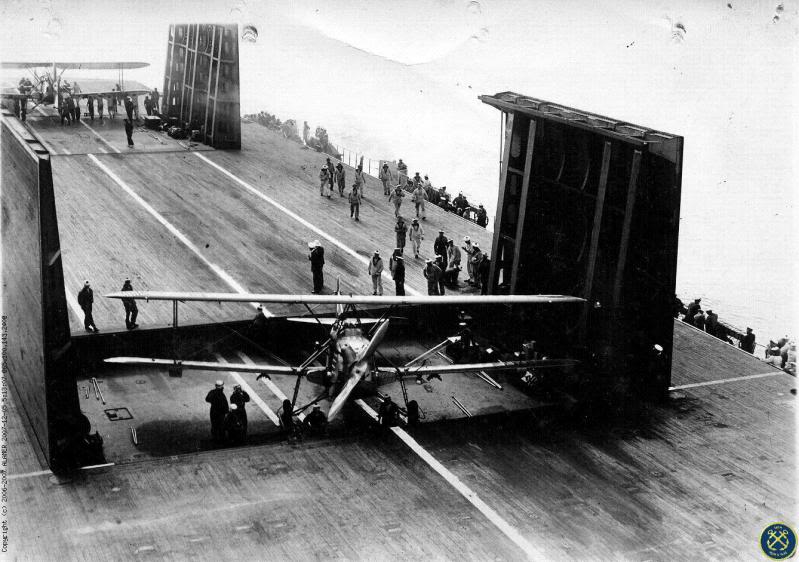 Covered with a 590-foot flight deck, she had two below-deck hangars served by three elevators (all in the center of the deck) and could carry about 40 aircraft.

Close up of her pre-war. Note the two casemated 6.1-inch guns Photo colorized by irootoko_jr

Like other carriers of her day, she was equipped largely with the same suite as a decent-sized cruiser, with eight 6.1-inch guns mounted in casemates (!) for surface action, a host of modest anti-aircraft guns, and a quartet of 22-inch torpedo tubes (unique in carrier development). She also had a modicum of armor above the waterline but no torpedo blisters. 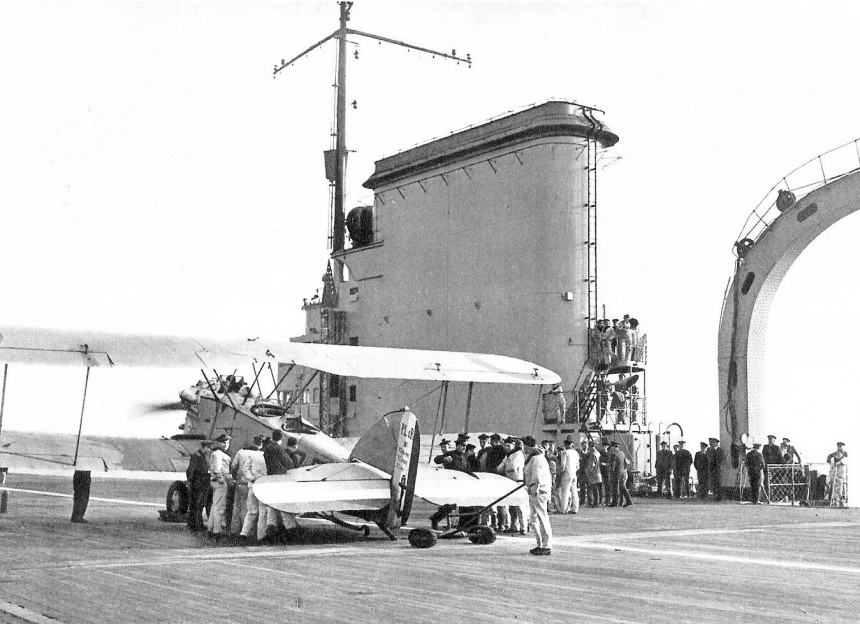 Her peacetime role in the 1930s saw her sprout the flower of French naval aviation, which was to be used on two follow-on 18,000-ton purpose-built flattops, Joffre and Painlevé, ordered in 1937. As Bearn was somewhat stubby (with a 590-foot flight deck, far outclassed by the big Lexington and Akagi), the newer carriers would go almost 800-feet long, which was thought ideal.

When those two carriers joined the fleet, she was to convert to a seaplane depot ship in 1942. 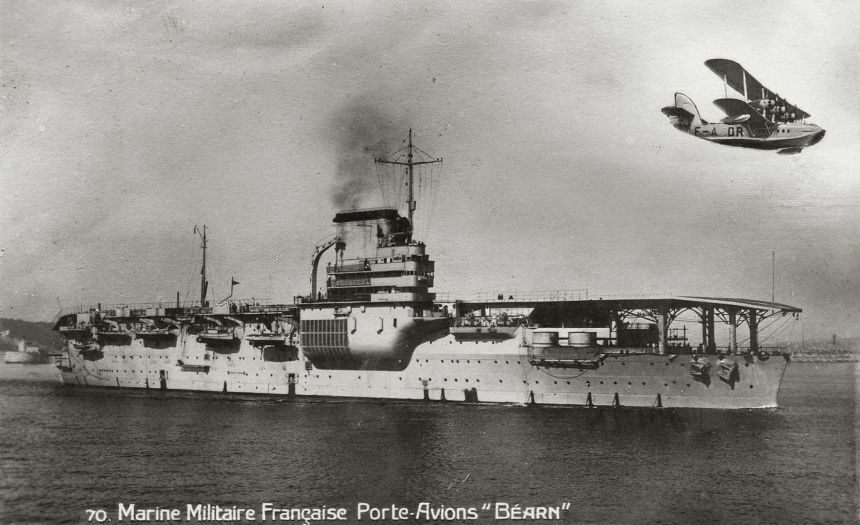 However, when the next war started, Bearn was all the French had as the other two carriers were still under construction (and never completed).

In 1939, Bearn was assigned, alongside the new battleship Dunkerque (with quadruple turrets!) and three cruisers to go and hunt down German surface raiders, which turned out to be uneventful.

In May 1940, with things not going so well for the French Army, she was ordered to Toulon where she secretly took aboard the 3880 boxes of the Republic’s gold reserves (over 250-tons) and, escorted by the 6500-ton school cruiser Jeanne d’Arc and the new 8400-ton light cruiser Émile Bertin, sailed for Canada under the command of Rear Admiral Rouyer.

In early 1940, 50 former USN Curtiss SBC Helldivers were taken out of reserve, given French machine guns and camo patterns, then flown to Nova Scotia to be loaded onto Béarn and the light cruiser Jeanne d’Arc. Because of space limitations, only 44 of the SBC-4s could be carried on Béarn as she also had 25 Stinson 105s, 17 former USAAF P-36s, and 6 Brewster F2A-2 Buffalos aboard for the Belgian Air Force. Jeanne d’Arc carried 14 crated, unassembled aircraft: 8 Stinson 105s and 6 Curtiss P-36s.

Sailing from Halifax on 16 June 1940 bound for Brest, the news came that France fell and the ships diverted to the colony of Martinique.

Six Belgian Brewster Buffalo’s aboard the French aircraft carrier Béarn during the journey, which would end on Martinique. Besides the Buffalos, she was carrying 27 Curtiss H-75s (P-36s), 44 SBC Helldivers, and 25 Stinson Voyagers.

Unwilling to join the Free French forces, the three-ship task force offloaded their gold and planes on the island and made ready to defend it against any invader, be they British or German, and remained on this footing for almost two years.

Finally, after pressure from the Americans, on 16 May 1942, they were ordered by the Vichy authorities to be immobilized and interned.

With the fall of Vichy France following the invasion of North Africa, the ships joined the Free French forces in June 1943 when the local government recognized DeGaulle’s.

At that point, Jeanne d’Arc immediately left for the Med where she participated in the capture of Corsica and helped the Allied fleets for the rest of the war. Bearn and Émile Bertin, in need of a refit, sailed for the U.S.

After modernization at the Philadelphia Naval Shipyard, Bertin joined Jeanne d’Arc in the Med in time for the Allied invasion of southern France (Operation Dragoon) in August 1944 and later bombarded Axis positions along the Italian Riviera.

As for the aircraft Bearn left in the Caribbean, they were shipped from the West Indies to Morocco during 1943-44, placed in flying condition, and used for training, with some of the Stinsons reportedly remaining in service as late as the 1960s.

For Bearn, her refit took far longer due to her size, complex engineering suite, and the fact that her pre-war AAA suite was considered wholly inadequate by 1943 standards for a ship her size.

She traded in her 6-inch casemates, 13.2mm machine guns, and 75mm low-angle pieces for 4 5″/38s, six quad 40mm Bofors, and 26 20mm Oerlikons, which sounds about right. Her flight deck was shortened, the central elevator was removed, modern electronic equipment was installed, and the complement was reduced to 650. Oh yeah, and her torpedo tubes, inactive since 1939 anyway, were deactivated.

Bearn after her WWII American refit. Note the casemates are empty and several AAA guns are fitted as are emergency rafts and liberal camo. Note stored planes on deck Photo colorized by irootoko_jr

Emerging from Philadelphia in April 1945 and with the European war ending, she was sent with her old Martinique pier-mate Émile Bertin as part of the immense French Armada sailing to liberate Indochina from the Japanese, arriving there just after the end of the War in the Pacific.

Although the only French aircraft carrier from 1928-45, her final days were numbered. Instead of an air wing, she arrived at Haiphong loaded with troops and supplies.

Serving as an aviation transport rather than a full-fledged carrier, (the French immediately after the war operated F6Fs, Bearcats, Douglas Dauntless dive bombers, Helldivers and F4Us from loaned jeep carrier HMS Biter/Dixmude, the Independence-class light carriers Langley/Lafayette, and Belleau Wood/Bois Belleau as well as the British-built Arromanches and didn’t need Bearn‘s flattop anymore), she was recalled to Toulon and served as an immobile submarine accommodation and training ship.

French carrier Bearn in port at Toulon, France, 1964. Note the moored submarines, lack of any armament, and helicopter landing zones marked on her deck.

Bearn continued this sad role until November 1966 when she was stricken. She was sold for scrap the following year. Although her hull had more than 50 years on it, she was only in active service in fleet operations for about 14 of those and reportedly never fired a shot in anger or launched a combat sortie.