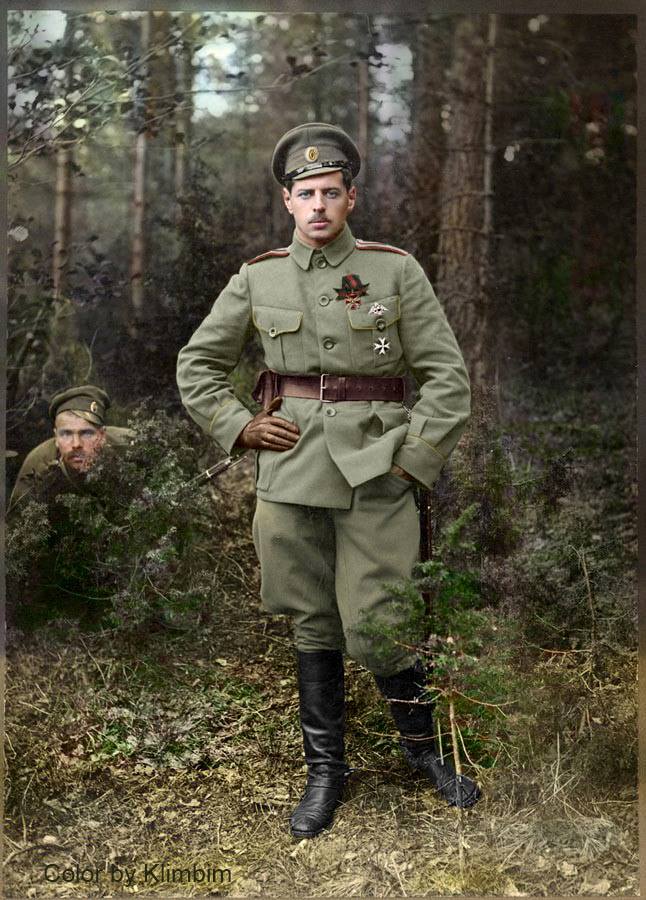 Here we see a young guards officer of the Tsar’s Russian Imperial Army, Staff captain of the Life-Guards Lithuanian Regiment Bogutskiy in June 1915 during some of the darkest days of the First World War. The good captain wears the Order of St. Vladimir, to the 4th degrees with swords.

Note he has an officer’s sword on his left and a holstered revolver, likely a Nagant 1895 on his right, both set up to cross-draw. The photobombing guardsman with the Mosin 91 and eschew cap is the moneymaker in this one. Olga Shirnina from Russia colorized this image and the original is here.

By the time Bogutskiy’s picture was taken, the Lithuanian regiment, which started the war as part of the 23rd Army Corps of General AV Samsonov’s doomed II Army had escaped German encirclement the Battle of Tannenberg East Prussian operation and gone on to fight the Kaiser’s troops halfway across Poland. This officer with the sad eyes and well trimmed mustache, incidentally, was killed on the front in 1916.

The Regiment had much history in its short life.

Originally, a part of the Moscow Life Guards Regiment (formed in 1811) they fought Napoleon at Borodino and all through Europe, marching through France at the end of the little Emperor’s Empire. When the Tsar picked up the Kingdom of Poland in the peace that followed, the Lithuanians were split from the Regiment and sent to Warsaw and a new Life Guards unit, being officially given its standard on 12 October 1817.

They helped put down Polish uprisings in 1830 and 1863, marched into Hungary in 1849 to do the same there for the Austrian Kaiser on the Tsar’s behalf, fought in the Crimean War and against the Turks in 1877 and Japanese in 1905. Drawn from ethnic Lithuanians, they had distinctive yellow trim to their uniforms in all of its variations (though only a thread on the shoulder boards of the 1909 field uniform shows at the top of the post). Their regimental crest, below, is however seen distinctively on Bogutskiy’s blouse. 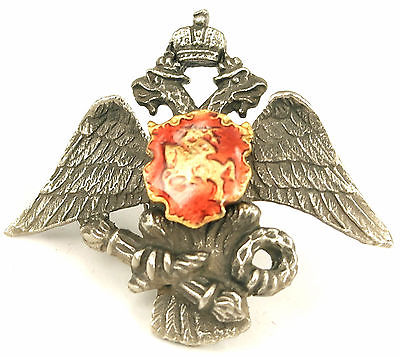 Below is an interesting German newsreel archive of Emperor Nicholas II and his son Alexei watching the military parade of the Life Guards regiment of Lithuania at the annual maneuvers at Kransoe Selo just south of St. Petersburg in the summer of 1914. Of interest is the parade of the unit that begins about the 3.18 mark after Major General Konstantin Schildbach, then unit commander, takes a toast to the Emperor health. You will notice the color’s company come through wearing all of the Regiment’s various uniforms issued from 1811 through 1914.

Schildach was in interesting fellow. An ethnic Baltic German from a wealthy ennobled family with some 200 years of service to the Tsar, he graduated from the Alexander Military School and joined the Army in 1888, serving far and wide in the Empire. He commanded the Lithuanians during WWI until June 1915 when he changed his last name to Lithuania due to anti-German sentiment in the country. That’s ballsy. Could you see an officer with an Arabic-sounding name today in the U.S. Army change his to “Ranger” or some sort. That’s being married to the Army there.

The toasting Schildach seen in the video

Anyway, Schildach left the unit to command the 1st Brigade of the 3rd Guards Infantry Division then six months later was made chief of staff of the 39th Corps and by the end of 1916 was commander of the 102nd Infantry Division of 16,000 recently trained men. When the March Revolution came that swept away the old order, he was cashiered by the new government but quickly called back in May to command the rapidly disintegrating 79th Infantry Division as a Lt. Gen. When the war ended and the Civil War began he found himself first working in the Ukrainian puppet army of Skoropadsky with the Germans then in the White Army.

However when the Whites left in permanent exile in 1920, Schildach stayed in Russia and talked his way to a job as a military instructor in Moscow with the Reds but was later thrown in the gulag for three years and, even though allowed to return to Moscow, was arrested again in 1938, shot, and dumped in a bag in Donskoy cemetery. The Putin government declared him officially rehabilitated in 1996, which is nice.

Anyway, back to the war service of the Lithuanian Regiment.

Soon after the good Captain Bogutskiy’s photo bomb above, the unit kept up its fighting retreat during the great defeats by the Russian Army in the summer of 1915 but remained intact. Rebuilt over the winter, they participated in the Brusilov Offensive that came very close to knocking Austria out of the war. Interesting that a unit that helped keep the Austrian Kaiser on the throne in 1849 would come so close to sweeping him off just 60 years later.

On March 12, 1917, the day the Lithuanian Life Guards Reserve Regiment in St. Petersburg (Petrograd) mutinied, Capt. Bogdan K. Kolchigin was elected commander by the committee of soldiers at the front and remained in command until the Moscow Regional Commissariat for Military Affairs, in their Order No. 139, disbanded the former regiments of the Imperial Guard on March 4, 1918 (though the order did not cover the Reserve Regiment in St. Petersburgh which lingered until the Commissariat of Military Affairs of the Petrograd Labor Commune ordered it disbanded on June 6, 1918).

Interestingly, Kolchigin threw his hat in with the Reds and, taking his ex-Guards with him in an orderly withdrawal to Voronezh when the front collapsed after Russia withdrew from WWI, they became the Lithuanian Soviet Regiment and were one of Trotsky’s most professional units in the Civil War.

Kolchigin went on to keep his head and rose to become a Lt. Gen in the Red Army proper, ending his career as commander of the 7th Guards Rifle Corps, 10th Guards Army in 1945 after having lost his foot to a German mine and picking up three Order of the Red Banners and an Order of Lenin from Papa Joe Stalin in the Second World War to go along with his Knights of the Order of St. George awarded by Tsar Nicky in the First. 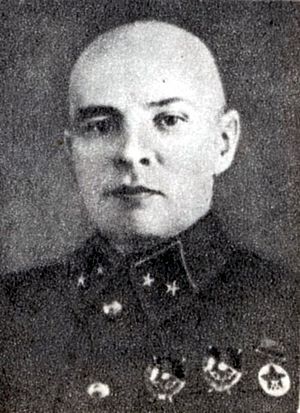 Kolchigin, in Red Army regalia. Look at all of those Red Banners.

He became a military historian of some note and, when he died in in 1976, was given a hero’s funeral, taking the Lithuanian Regiment of Life Guards with him in his heart to the rally point in the great drill field in the sky. It’s likely Kolchigin had an interesting conversation with Bogutskiy and Schildach when he got there.

And was maybe even photobombed by a guardsman with a crooked hat.