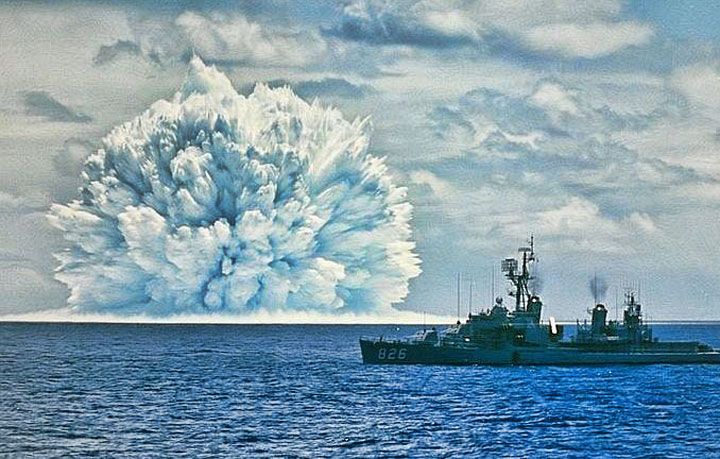 Here we see the beautiful water column blossom caused by a 20-kiloton warhead going off just 2.5 miles away from the ship that fired it, the hero of our story, the FRAM’d Gearing-class destroyer USS Agerholm (DD-826). You can note her ASROC launcher amidships deployed with one cell pointed in the general direction of said atomic water dome.

In July 1942 the U.S. Navy, fighting Hitler’s U-boat horde in the Atlantic and Tojo’s Combined Fleet in the Pacific was losing ships faster than any admiral ever feared in his worst nightmare. With that in mind, the Navy needed a lot of destroyers. While the Fletcher and Sumner classes were being built en mass, the go-ahead for some 156 new and improved Sumners— stretched some 14 feet to allow for more fuel and thus longer legs to get to those far off battlegrounds– was given. These hardy 3,500 ton/390-foot long tin cans, the Gearing-class, were soon being laid down in nine different yards across the country.

Designed to carry three twin 5 inch/38 cal mounts, two dozen 40mm and 20mm AAA guns, depth charge racks and projectors for sub busting, and an impressive battery of 10 21-inch torpedo tubes capable of blowing the bottom out of a battleship provided they could get close enough, they were well-armed. Fast at over 36 knots, they could race into and away from danger when needed.

As noted by the NHC, this 19-year-old PFC was a man among men.

His second combat operation began in mid-June 1944, when he landed on Saipan, in the Marianas. On 7 July 1944, when Japanese forces counter-attacked and captured a neighboring position, Agerholm immediately volunteered to help evacuate the wounded. For three hours, he made repeated trips under heavy rifle and mortar fire, single-handedly evacuating approximately 45 causalities. Rushing to help what he thought were other wounded Marines, he was mortally wounded by a Japanese sniper. For his “conspicuous gallantry and intrepidity,” he was posthumously awarded the Medal of Honor. Harold C. Agerholm is buried at Mount Cemetery, Racine, Wisconsin.

While ordered during the thick of the fighting, the ship named after our hero Marine wasn’t laid down until 10 September 1945 at Bath Iron Works in Maine– a full week after VJ Day. Christened by Agerholm’s grieving mother, she was commissioned 20 June 1946. Just four of her class were commissioned after her, and 58 were canceled in the inevitable post-war drawdown. 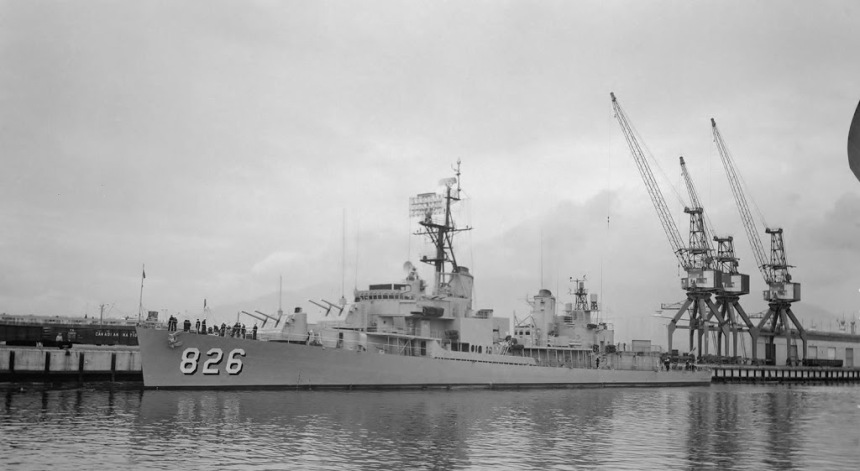 Stationed in the Pacific, Agerholm would accomplish a very respectable 21 WestPac deployments over the next 32 years of active duty under 27 skippers, never once passing to the reserves like many other period surface combatants. 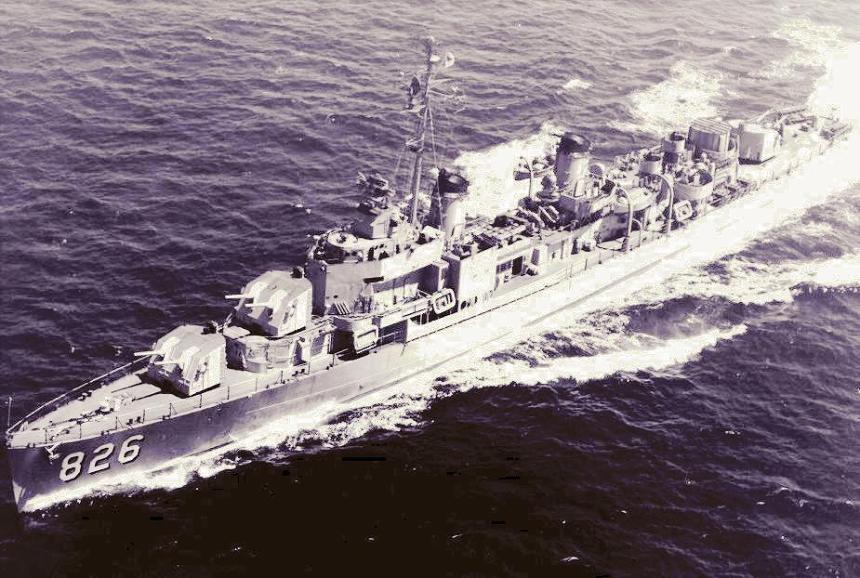 She earned four battlestars for Korea for which she was forward deployed inside that warzone almost every day between 15 Mar 1951 and 31 Mar 1954 with brief pauses to take on more 5-inch shells, chow, and fuel. She plucked the pilot of an F4U-4 Corsair of VMF-312 from the USS Bataan, Marine 1LT Darrell Smith, from the drink in May 1951; plastered Wonsan and various Nork/Chicom troops with her guns when needed, and basically made herself useful throughout the conflict. 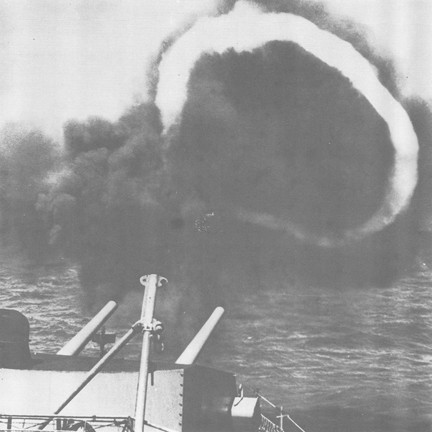 In 1961 she was given a Fleet Rehabilitation and Modernization (FRAM) program upgrade, which consisted of a general overhaul of the 15-year-old ship, getting new sensors, swapping out her surface torpedo tubes for an amidships ASROC launcher, trading her depth charges for triple Mark 32 torpedo tubes for Mark 44 torpedoes, and landing her aft 5-inch mount for a mini-helicopter deck for an OH-50 DASH drone.

USS Agerholm Description: (DD-826) Underway on 18 April 1961, after her FRAM I conversion. Official U.S. Navy Photograph, from the collections of the Naval History and Heritage Command. Catalog #: NH 107129. Contrast this with the overhead image above showing her WWII configuration.

Operation Dominic was a series of 36 nuclear explosions carried out by the U.S. at Christmas Island about 400 miles southwest of southern California during the Spring of 1962. One of these three dozen tests, Swordfish, involved Agerholm launching a nuclear-armed ASROC device into a well-instrumented test area.

The 160-pound rocket was outfitted with a W-44 nuclear warhead with a 10-20 Kt yield range and it is believed it went closer to the high end.

Aiming at a target raft 4,348 yards away, the rocket missed its sub-surface zero point by 20 yards and exploded 40 seconds later at a depth of 650 feet in water that was 17,140 feet deep.

However, 20 yards really doesn’t matter that much in nuclear weapons.

Swordfish was the only full-service test of a nuclear-tipped ASROC missile and some 120 cameras caught the explosion from all angles.

“The spray dome from the detonation was 3000 feet across and rose to 2100 feet in 16 seconds. The detonation left a huge circle of foam-covered radioactive water. Within two days it had broken up into small patches and spread out for 5 to 8 miles”

This video was declassified in 1997 and shows multiple views of the Swordfish shot, and show just how friggen close Agerholm was.

(Note, the second blast shown on the clip is Operation Sailor Hat on the island of Kahoʻolawe, Hawaii in 1965 in which the light cruiser USS Atlanta and the guided-missile destroyer leaders USS England and USS Dale received a shellacking from three 500-ton charges of TNT high explosive detonated on the shore, staving in some deck houses and sweeping away some antenna.)

After her brush with Atomic history, Agerholm fell back into her normal WestPac cruise schedule, taking midshipmen on summer cruises while showing the flag.

Then came Vietnam and from August 1964 to April 1975 she was extensively involved there. She spent time as a plane guard for numerous carriers in the million-sortie war on Yankee Station. 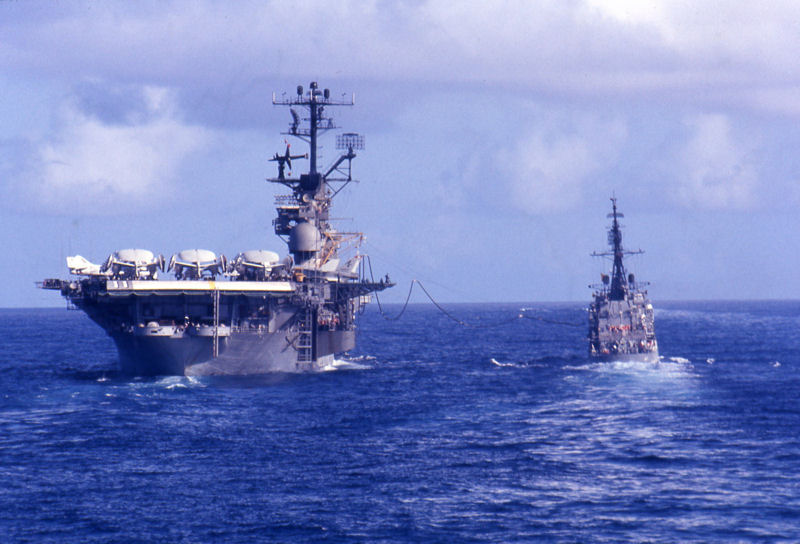 In 1966 while on Yankee Station, Agerholm undertook frequent near-shore naval gunfire support missions and, on 7 May, helped extract PCF42, which was under close fire just 800 yards offshore of Binh Dinh Province, recovering the patrol boat’s forward turret gunner who was hit on the flak jacket by small arms fire. She also came to the aid of USS Forrestal during her terrible 29 July 1967 chain reaction fire.

Gunfire Mission in Vietnam 1969 – by Ltjg Richard Crowe via ussagerholm.org

Agerholm got in lots of gunnery time against Mr. Charles and finished her Southeast Asia experience with eight more battlestars. Scoring another first, on 8 May 1968, she fired the first Rocket Assisted Projectile from her 5-inch guns, cruising near the briefly recommissioned battleship USS New Jersey, who was using her own novel RAPs to reach well inshore.

Dressed for visit Auckland, New Zealand, 1977. This is our destroyer in the peaceful twilight of her life. Via Shipspotting

Agerholm‘s last action was in assisting with the military evacuation by air of Phnom Penh, Cambodia in the final days of the conflict.

The days of WWII-era destroyers in the Navy by that time were numbered as the new Spruance-class was coming on line. Therefore, on the grizzled veteran with a dozen battlestars on her bridge wing was decommissioned on 1 December 1978 and her name struck from the Naval List that same day, sparing her the indignity of carrying it into red lead row.

She was expended in a SINKEX just over three years later

Her wreck is known

Today she is remembered by a vibrant veterans association.

Agerholm is on display at Rickover Hall, USNA, Annapolis, so to speak, in a 1:24 scale model.

As noted by Atlas Obscura:

This 16-foot long model is a cutaway that shows the exterior on one side, and reveals the complicated interior layout on the other. David Wooley and William Clarke write in Warships and Warship Modeling that “The Agerholm is probably the most detailed model ever built.”

The World War II-era miniature destroyer was pieced together by the Gibbs and Cox Company model shop in the 1940s. The model Agerholm cost $1.4 million at a time when a single family suburban home went for about $7,000.

Of her massive armada of 98 Gearing-class sisterships, 10 survive above water in one form or another including three largely inactive hulls in the navies of Mexico and Taiwan. The others are museum ships overseas except for USS Joseph P. Kennedy, Jr. (DD-850) in Fall River, Massachusetts; and USS Orleck (DD-886) in Lake Charles, Louisiana. Please visit these vital floating maritime relics.

One enduring link to the past for Agerholm is VMFA-312, the squadron whose Corsair pilot she saved back in 1951, which is still on active duty. The “Checkerboards” now fly F/A-18s out of MCAS Beaufort. The pilot, two-time DFC winner Darrell Smith, has lived a long life.

WWII Gearing layout. Contrast this with her FRAM look as shown frequently above