Posted on July 20, 2016 by laststandonzombieisland 6 comments 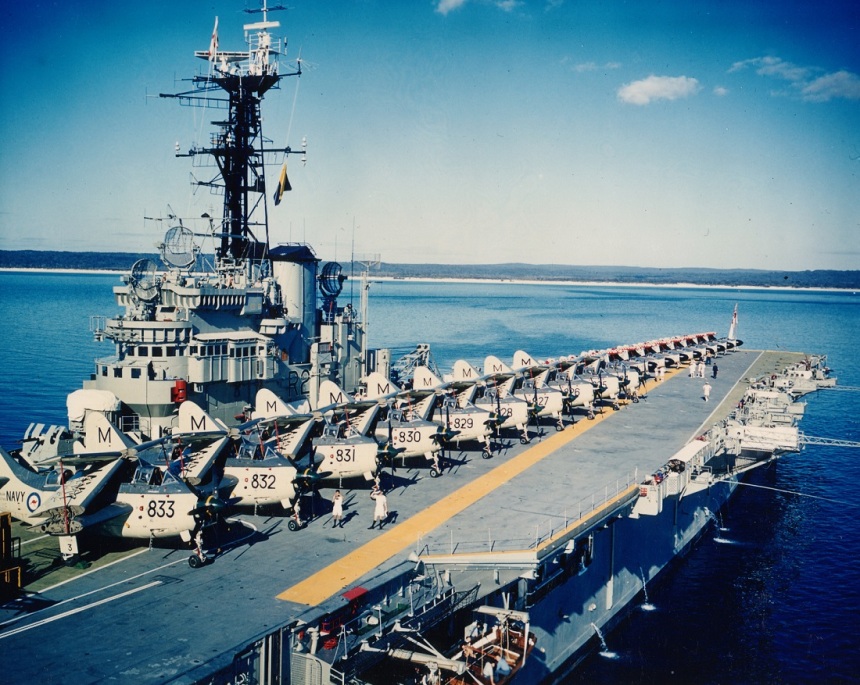 Here we see the lead ship of the Majestic-class of British Royal Navy carriers, the HMAS Melbourne (R21) with Gannets and Sea Venoms ranged on deck, early during her career in the Royal Australian Navy.

She was one of 16 planned 1942 Design Light Fleet Carriers for the RN. This class, broken up into Colossus and Majestic-class sub-variants, were nifty 19,500-ton, 695-foot long carriers that the U.S. Navy would have classified at the time as a CVL. They were slower than the fast fleet carriers at just 25-knots with all four 3-drum Admiralty boilers were lit and glowing red, but they had long legs (over 14,000 miles at cruising speed) which allowed them to cross the Atlantic escorting convoys, travel to the Pacific to retake lost colonies or remain on station in the South Atlantic (Falklands anyone?) or the Indian Ocean for weeks.

Capable of carrying up to 52 piston engine aircraft of the time, these carriers had enough punch to make it count.

The thing is, only seven of these carriers were completed before the end of World War II and even those came in during the last months and weeks. They effectively saw no service. Laid down beginning in 1942, most of the ships were launched and afloat in 1945 but when the war ended, construction was canceled.

That’s what happened to the hero of our tale, HMS Majestic, which was laid down at Vickers-Armstrongs, Barrow-in-Furness in April 1943, around the time of the invasion of Sicily, though work stopped on her floating hull in 1945.

With the Post-WWII Royal Navy not needing 16 flash new oceangoing landing strips, they kept a few, then started selling off the rest. Three went to Canada, one to France, one to Holland, one to India, others were scrapped.

Of the Colossus/Majestic, light carriers, three– Majestic, Vengeance and Terrible— were transferred to Australia as HMAS Melbourne, HMAS Vengeance, and HMAS Sydney, respectively.

Completed after a dozen years in the builder’s yard, Melbourne was commissioned 28 October 1955 and had the benefit of an angled reinforced flight deck, steam catapult, beefed up arrester gear and a mirror landing aid added during her time under construction– in effect, updating her WWII design to operate jet aircraft. 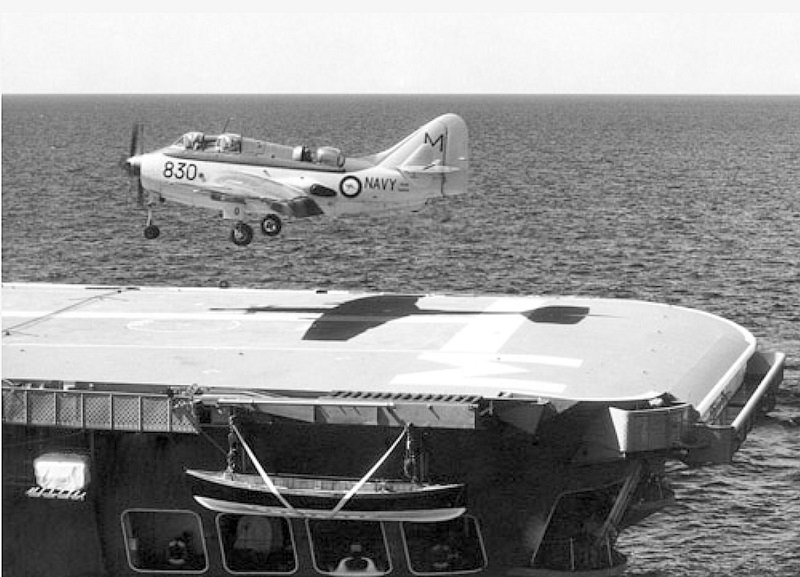 Once received, the RAN gave HMAS Vengeance back to the Brits who sold her to Brazil as the Minas Gerais and passed Sydney into use as a training vessel and transport, comfortable with operating just Melbourne as a fleet carrier and flagship, carrying the flag of a rear admiral while in commission. 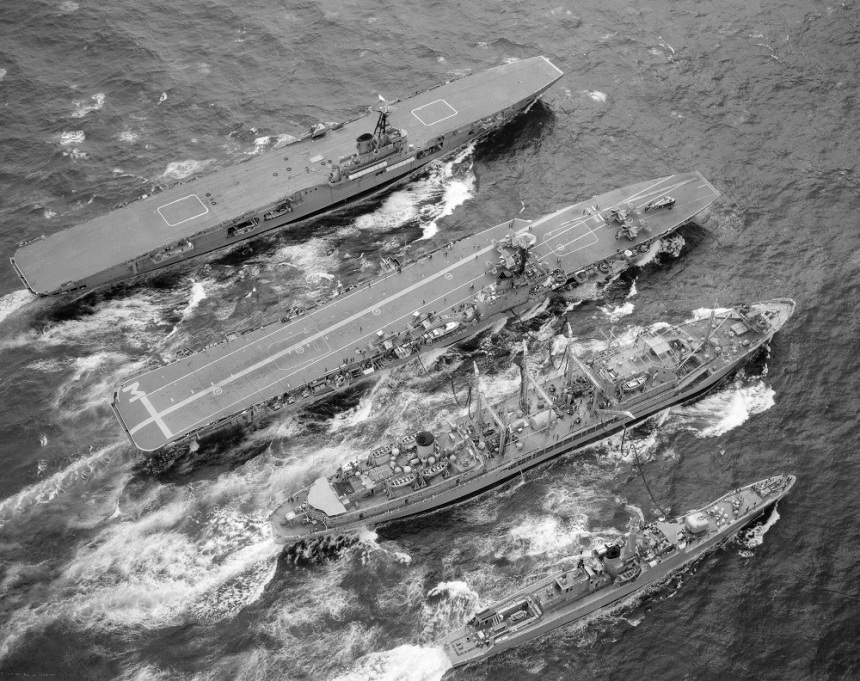 HMAS Sydney (A 214), Melbourne (R 21), Supply (AO 195) and Yarra (DE 45). Note how different the unmodified Syndey on the outside is from Melbourne. Hard to believe they are sisters.

Taking her name from one of the first ships of the Australian Navy, in this case, a WWI cruiser, Melbourne sailed from Glasgow for Australia on 11 March 1956 with 808 Squadron (Sea Venom all-weather fighters) and 816 & 817 Squadrons (Gannet anti-submarine aircraft) embarked, a total of some 64 aircraft packed aboard. 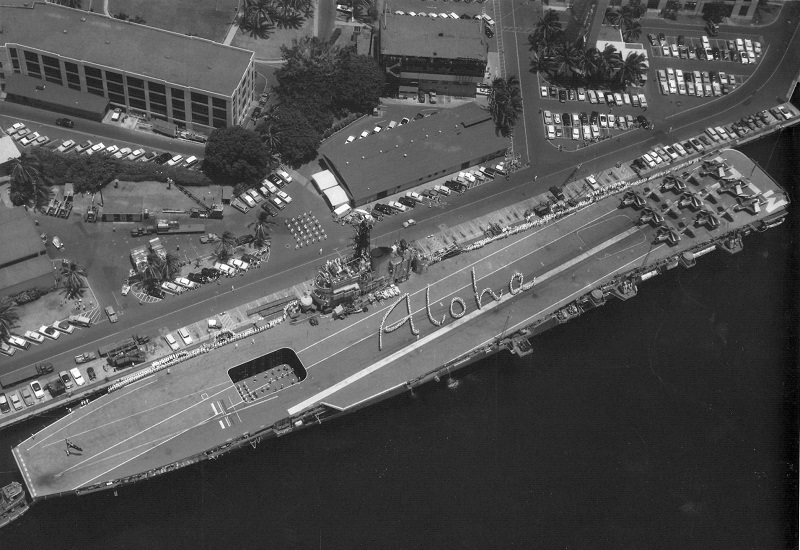 For the next several years, she participated in regular South East Asia Treaty Organization (SEATO) exercises and operations that took her all over the Pacific. During one cruise in 1958, she clocked more than 25,000-nautical-miles alone. 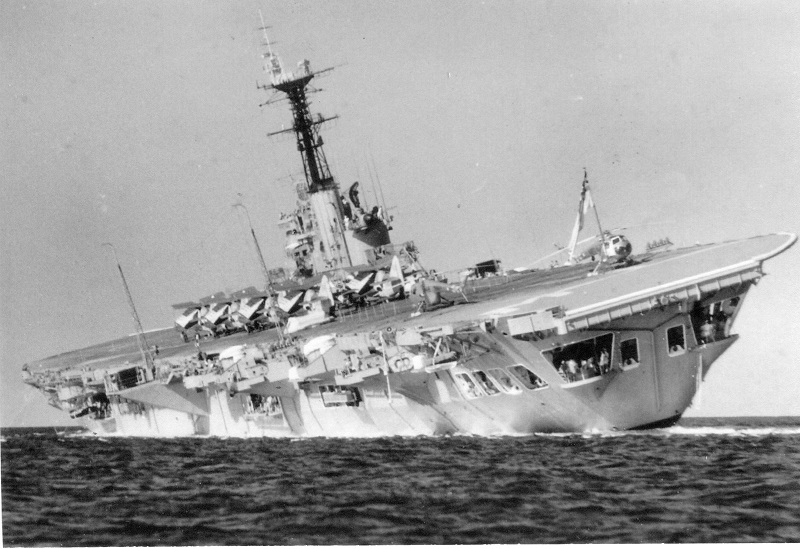 HMAS Melbourne conducting damage control drills off Thistle Island, Spencer Gulf, SA, 3 March 1960. She would need them in the future.

In 1963, due to budget constraints, the Sea Venoms and Gannets began to retire, replaced eventually with A-4G Skyhawks, S-2 trackers (whose wingspan was only three feet less than her flight deck width) and Westland Wessex anti-submarine helicopters.

On 17 March of that year, Melbourne celebrated her 20,000th landing when Lieutenant Ryland Gill, RAN, landed his Gannet on board. 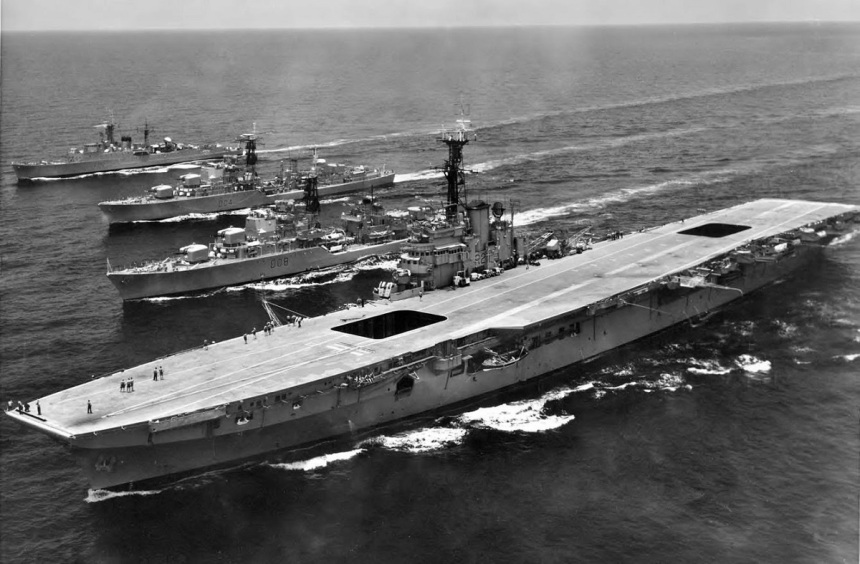 Tragedy struck on 10 February 1964 when, Melbourne was performing trials in Jervis Bay and collided with the Daring-class destroyer HMAS Voyager while zigzagging, which left the smaller warship cut in two and sinking, taking 82 lives with her in just 10 minutes. 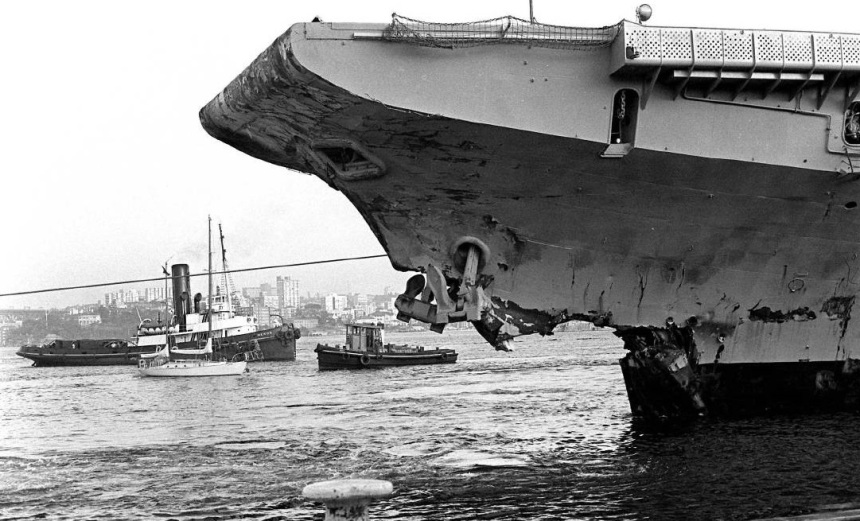 The bow of HMAS Melbourne after the collision with HMAS Voyager

A Royal Commission ultimately found that Melbourne‘s skipper was unfit to command for medical reasons while an earlier Commission held that Voyager was primarily at fault for failing to maintain effective situational awareness.

Soon she became involved in the periphery of the Vietnam conflict, with some of her Skyhawk crews training to fly on combat missions there from bases in Thailand, though they ultimately were not used. She escorted her sister Sydney on several trips to Vietnam carrying Australian troops to the war zone. It should be noted that between 1962-75 some almost 60,000 Australians, including ground troops and air force and navy personnel, served in Vietnam; 521 died as a result of the war and over 3,000 were wounded.

It was during that conflict that Melbourne was involved in a repeat of the Voyager incident when on 3 June 1969, while participating in SEATO exercise Sea Spirit in the South China Sea, she collided with USS Frank E. Evans (DD-754), slicing the vessel in two in the dark and killing 74 of her crew. 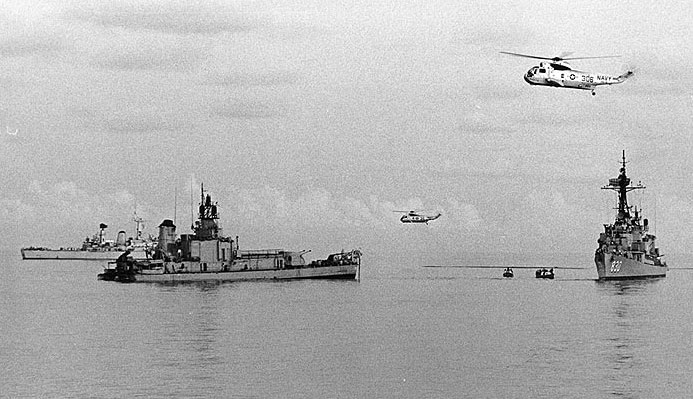 A joint RAN–USN board of inquiry found officers on both ships to blame. The Wessex unit onboard, 817 Squadron RAN, was later awarded the Presidential Unit Citation for their rescue efforts in the aftermath of the event.

Repaired, Melbourne undertook regular ANZUK, RIMPAC, and SEATO exercises as well as waved the flag extensively around the Pacific. At one point in 1974, she even embarked on a US Coast Guard Sikorsky HH 52 Seaguard helicopter for a time in the spirit of jointness. 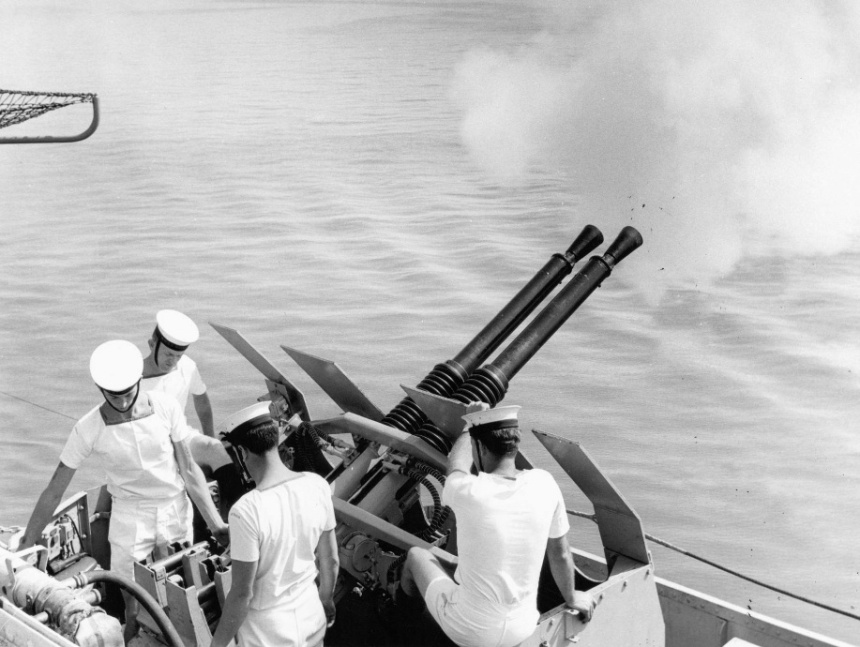 National Salutes exchanged as Melbourne enters Manila Bay at 0850, 22 May 1969 before anchoring at 0900. she would keep her WWII-era Bofors, though reduced in number, until her decommissioning 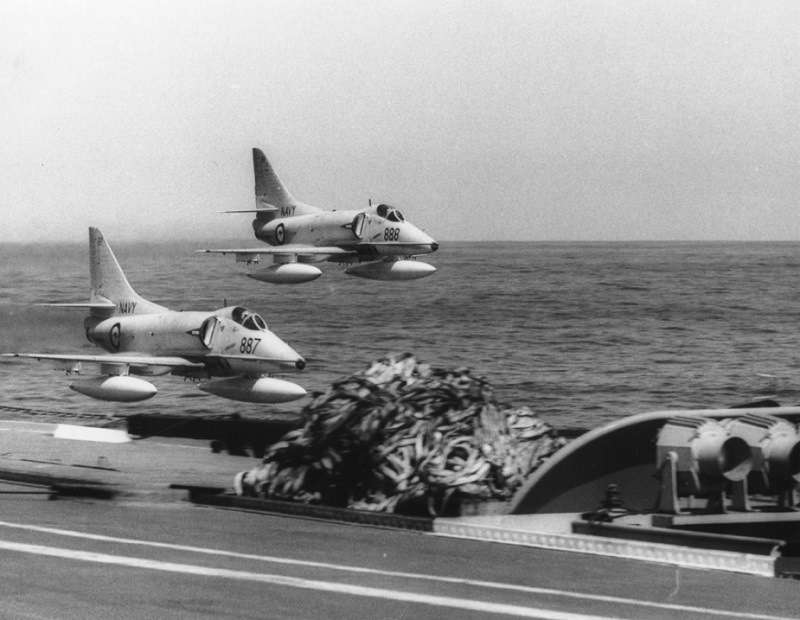 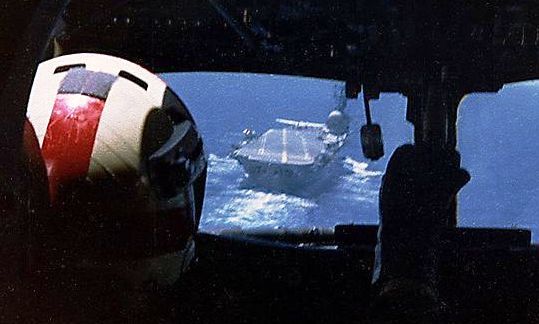 S-2 landing HMAS Melbourne. Via the STOOF Facebook page. Note how big the S-2 is on M’s bow. 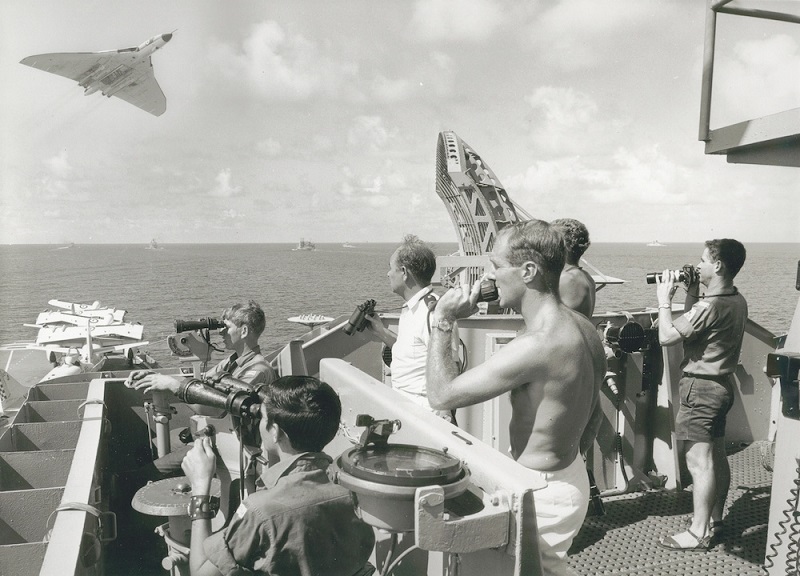 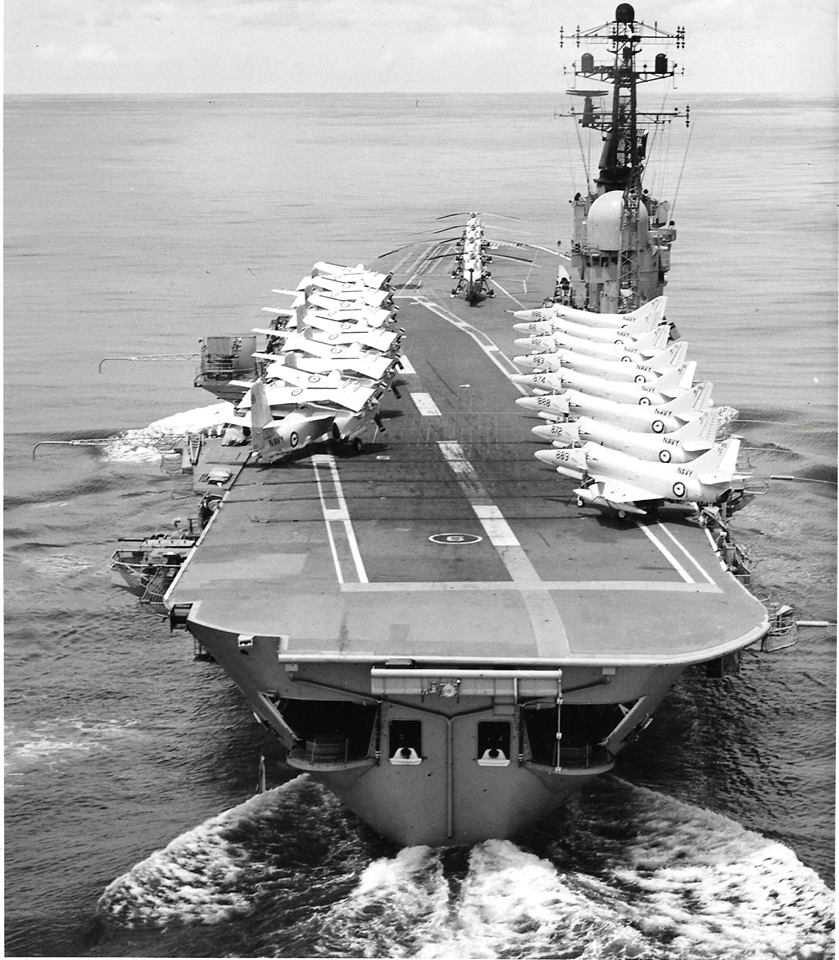 HMAS Melbourne on RIMPAC ’73– look at those Skyhawks! 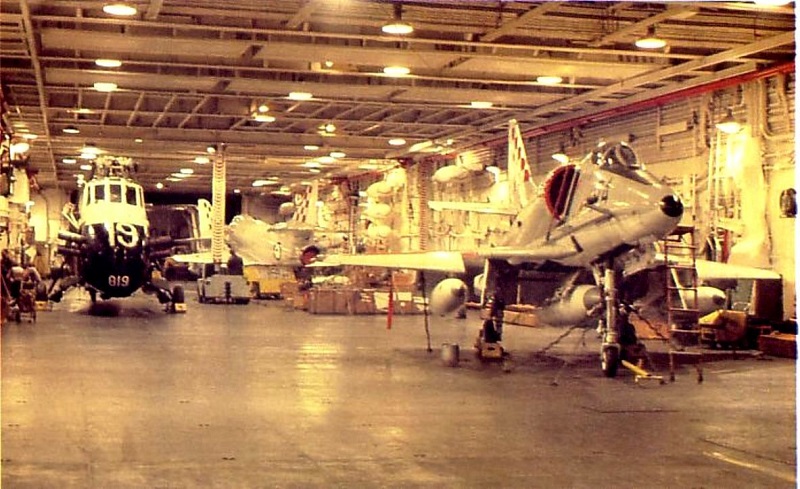 Her hangar deck– note the Scooter and Wessex

With Vietnam coming to a close, Melbourne‘s sister and the only other Australian flattop at the time, Sydney, was decommissioned 12 November 1973 and sold for scrap two years later. That largely disarmed carrier conducted some 25 voyages to Vietnam between 1965 and 1972, earning the ship the nickname “Vung Tau Ferry” after the RVN port she called at so regularly.

When 1977 came, the aging Melbourne took a trip to the land of her birth, passing through the Indian Ocean and the Med to the UK where she participated in Queen Elizabeth II’s Silver Jubilee– shadowed off and on by Soviet intelligence ships who came dangerously close at times. 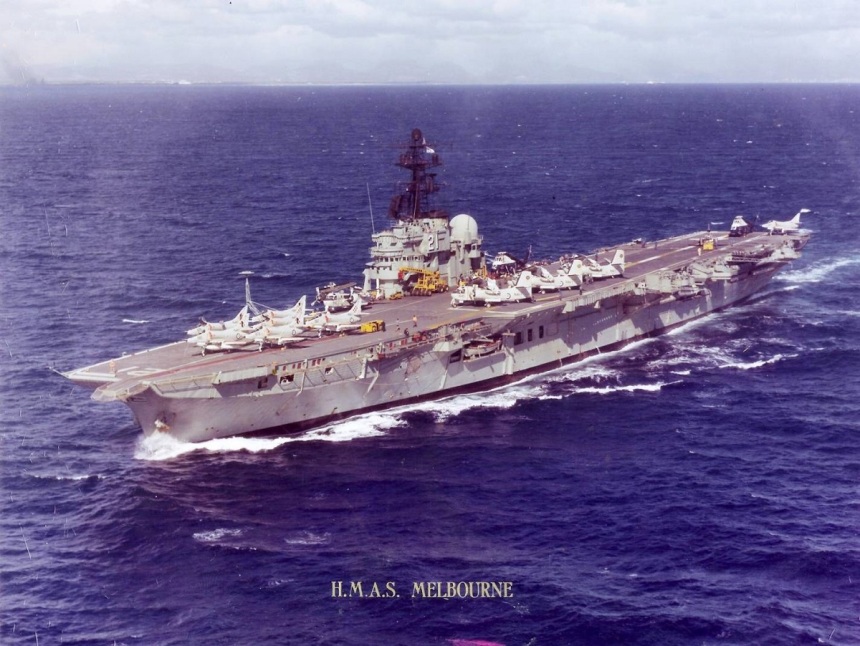 HMAS Melbourne note how big those S-2 trackers are 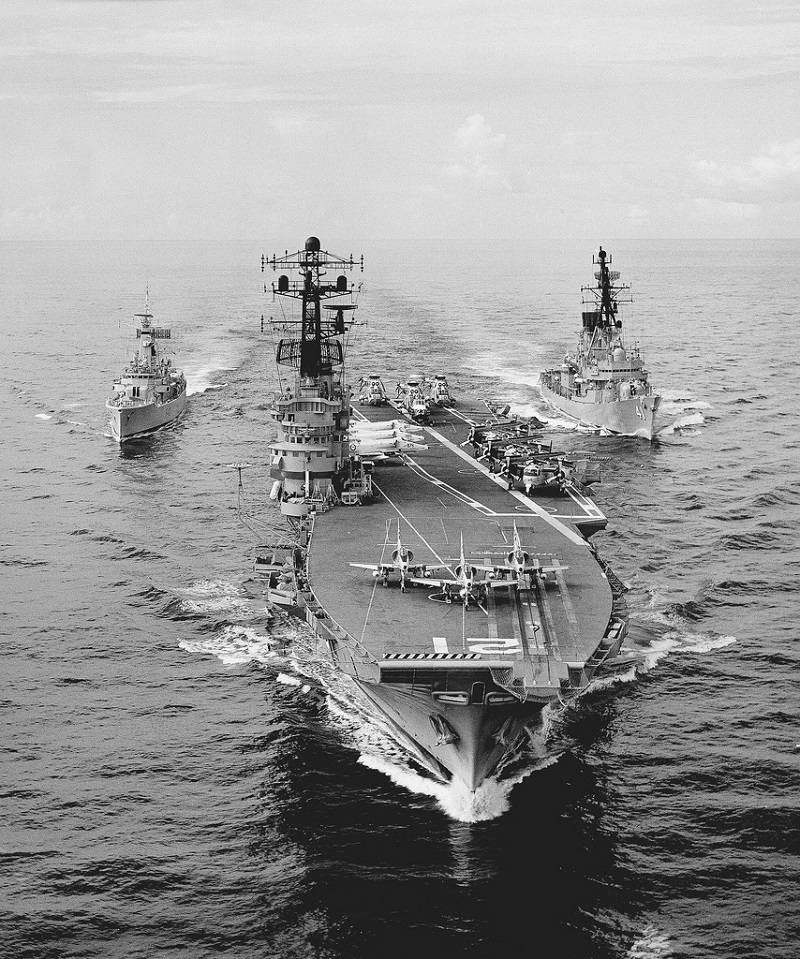 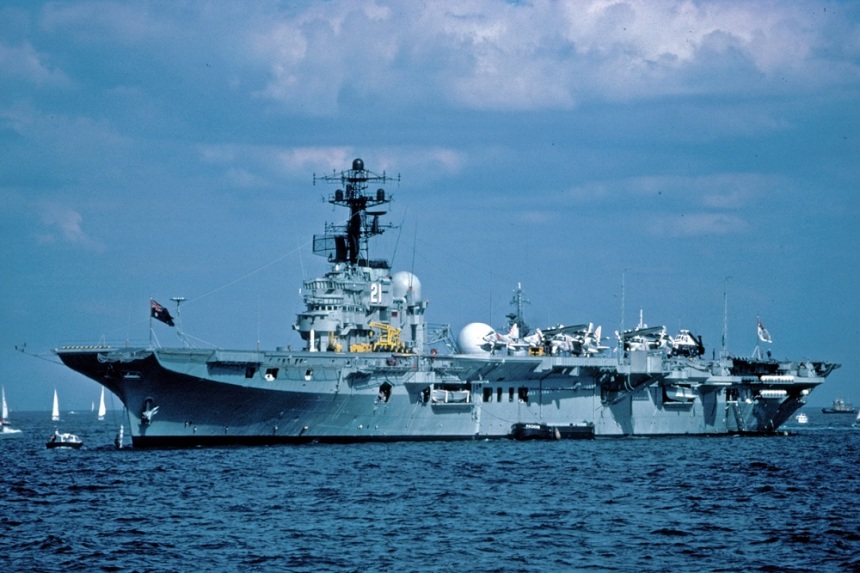 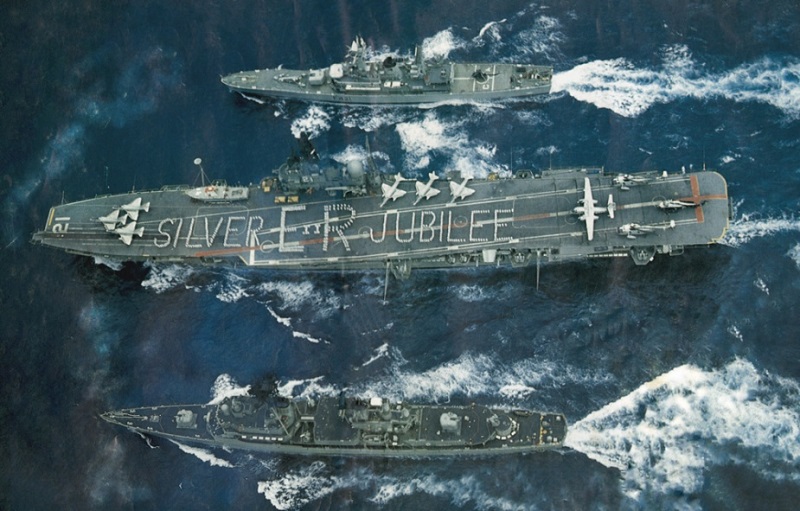 By the 1980s, her days were clearly numbered. Almost all of her sisters had gone to the breakers already with only the Argentine Navy’s ARA Veinticinco de Mayo (ex-HMS Venerable), Brazil’s Minas Gerais (ex-HMS/HMAS Vengeance) and the Indian Navy’s Vikrant (ex-HMS Hercules) still afloat. 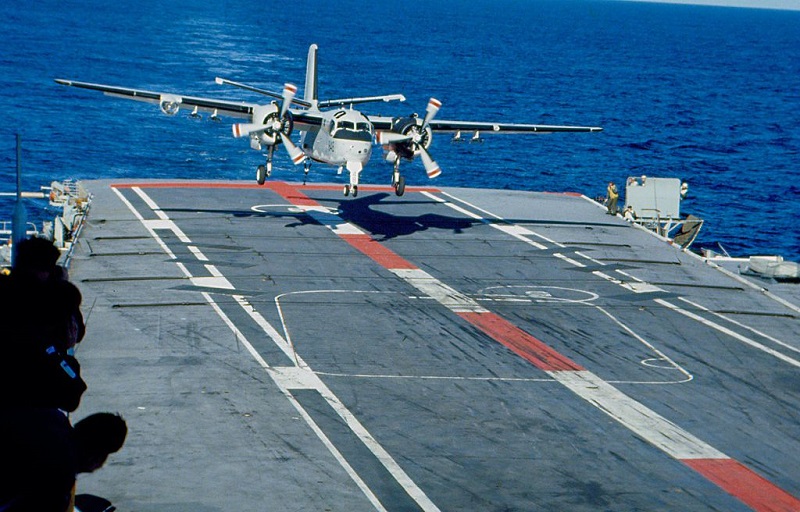 Tracker 848 about to take the wire aboard HMAS Melbourne, 1980 the USN had retired trackers in 1976. Look how broad that wingspan is. 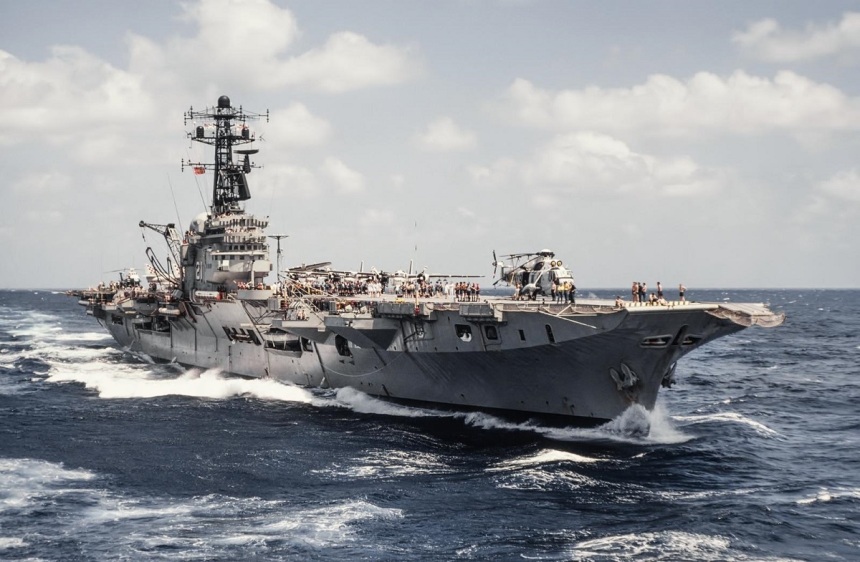 The plan at the time was hatched for Australia to buy the new British “Harrier carrier” HMS Invincible, then under construction, as Melbourne’s replacement.

However, with the Brits finding HMS Invincible newly useful during the Falkland Islands War, the deal fell through and Australia has been without a carrier for the past 34 years. The last Australian A-4G flights took place on 30 June 1984 followed the next week by the last S-2G.

The stricken Melbourne was initially sold in June 1984 to an Australian company for A$1.7 million, however, the sale fell through, and the next year she was sold to a Chinese company for A$1.4 million to be broken up for scrap metal in the port of Dalian, China.

Though her rudders were welded in place and all sensitive gear removed, the Chinese still got more than some scrap iron and asbestos out of her. During a painstakingly slow disassembly over the next 15+ years, the Chinese reportedly made extensive notes on her construction and steam catapult and landing systems as first steps towards their own carrier program. Reportedly, the Chinese Navy reverse-engineered a land-based replica of Melbourne‘s cat by 1987 and has used it in a series of trials of their own carrier-based aircraft.

The PLAN further compared the 1940s British design to that of the 1970s Soviet helicopter carriers Kiev and Minsk, purchased in the 1990s as floating amusement parks for tourists, to help with their own best practices in flattop construction moving forward.

As for the Australians, the name Melbourne was recycled for the Oliver Hazard Perry/Adelaide-class frigate HMAS Melbourne (FFG 05) that entered service in 1992.

A vibrant veterans group for all ships of that name exists as does a very in-depth page maintained by the RAN from which a number of these images originate.

In the U.S., Melbourne‘s legacy is remembered by the veterans of Evans and the survivors of those who were lost. The Department of Defense has agreed to review a request from families of 74 U.S. Navy sailors to add their names to the national Vietnam Veterans Memorial wall.

In 2012, the Australian government issued a formal and official apology to Melbourne Capt. John Stevenson, who was in charge of the vessel during the Evans collision saying he was “not treated fairly” by the government of the day and the Australian Navy.

All of the Colossus/Majestic class carriers are now gone, with INS Vikrant, saved briefly as a museum ship, scrapped in 2014, ending the era of these light carriers.

However, Australia’s two Canberra-class landing helicopter docks, 30,000-ton ships larger than Melbourne and Sydney ever were by far, are envisioned to be capable of handling the F-35B with some modifications and Prime Minister Tony Abbott instructed 2015 Defence White Paper planners to consider the option of embarking F-35B squadrons aboard the two ships, though at present it seems unlikely.