Posted on August 23, 2017 by laststandonzombieisland 4 comments

Here we see the Tromp-class light cruiser Hr. Ms. Tromp (D-28) of the Koninklijke Marine as she appeared in late 1941/early 1942 in the Dutch East Indies complete with her distinctive splinter camo. The leader of a class of four fast but small cruisers intended as “flotilla leaders” for a group of destroyers, she was a survivor and the largest Dutch warship to survive the hell of that lowland country’s combat in the Pacific.

At just 3,400-tons and 432-feet in length, the Tromp-class ships were about the size of big destroyers of their day (or frigates today), but they made up for it with an armament of a half-dozen 5.9-inch Mk 11 Bofors/Wilton-Fijenoord guns which were firmly in the neighborhood that light cruisers lived.

A suite of six torpedo tubes ensured they could perforate larger targets while geared steam turbines capable of pushing the ship at up to 35-knots gave it the option of a clean getaway from battleships. A Fokker C 11W floatplane gave long eyes while some 450-tons of armor plate (13 percent of her displacement) coupled with a dusting of AAA guns offered peace of mind against attack from low/slow aircraft and small vessels.

Laid down in 1936 at N.V. Nederlandsche Scheepsbouw Maatschappij, Amsterdam, the hero of our tale was named after noted Dutch Admiral Maarten Tromp, a 17th-century naval hero whose name was carried by several of Holland’s warships going back to 1809.

Billed by the Dutch as “flotilla leaders” they were meant to replace the elderly coast defense ships Hertog Hendrik and Jacob van Heemskerck and only reclassified as light cruisers in 1938 after funding was secured.

HNLMS Tromp lead ship of the Tromp-class light cruisers at high speed on trials, where she generated over 35 knots over the course. Via Postales Navales, colorized by Diego Mar 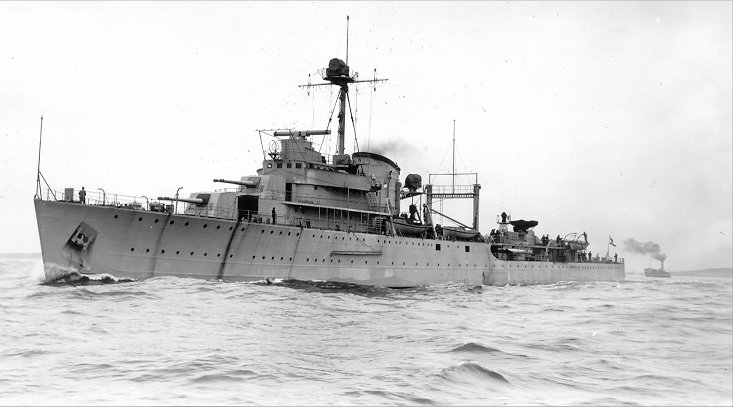 HNLMS Tromp during her first day of trials on the North Sea, 28 March 1938. Collection J. Klootwijk via NetherlandNavy.NL

Tromp would be the only one of her class completed to her intended design, commissioning 18 August 1938. Her sister Jacob van Heemskerck was still on the ways when the Germans invaded in 1940 and was later completed to a much different design while two other planned vessels were never funded.

Following several naval reviews and waving the flag in Europe on the edge of meltdown, she sailed for the important colony of the Dutch East Indies to help beef up the KM’s strength in a region where Japan was eager to obtain Java and Sumatra’s natural resources by force if needed.

Netherlands east indies. 1941-03-13. Aerial starboard bow view of Dutch flotilla cruiser Tromp, at anchor in calm water with one of her boats and native craft alongside. she is painted in her pre-war scheme of light grey. note the searchlight position on the foremast. She carries a Fokker c.14w floatplane amidships which is handled by the derricks on the two Sampson posts. Her prominent rangefinder is trained to port and a turret is trained over the starboard bow. on the deckhouse, aft are twin Bofors 40 mm aa guns on triaxially stabilized hazemeyer mountings which were very advanced for the period. (AWM Naval historical collection).

When Holland fell in May 1940, the Dutch government in exile under Queen Wilhelmina maintained control of the East Indies from London and Tromp spent the first two years of WWII with her eyes peeled for German raiders and U-boats in the Pacific and put on her war paint.

Then the Japanese went hot in December 1941, striking at the Dutch, British, and Americans simultaneously. Soon Tromp, arguably one of the most capable ships at Dutch Rear Adm. Karel Doorman’s disposal, was engaged in the thick of it. 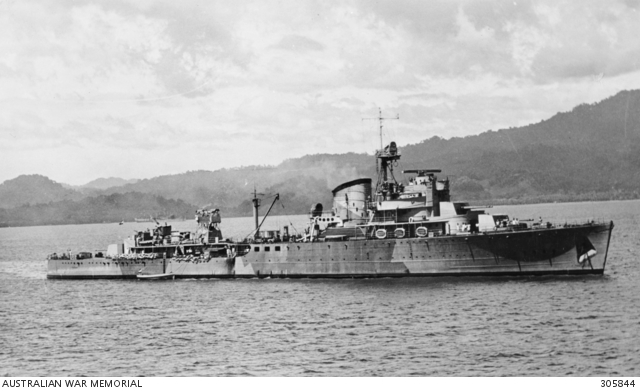 Netherlands east indies. C.1941-02. Starboard side view of the Dutch flotilla cruiser Tromp before the Badung Strait action in which she was seriously damaged. She wears a splinter-type camouflage scheme, apparently of two shades of grey, common to Dutch ships involved in the defense of the Netherlands East Indies. Note the searchlight position on the foremast. Her floatplane has been landed as has her port Sampson post. Note the prominent rangefinder above the bridge. On the deckhouse, aft are twin Bofors 40 mm aa guns on triaxially stabilized hazemeyer mountings which were very advanced for the period. (AWM naval historical collection).

During the three-day running action that was the Battle of Badung Strait, Tromp and the destroyers USS John D. Edwards, Parrott, Pillsbury, and Stewart clashed with the Japanese destroyers Asashio and Oshio in a sharp night action in the pre-dawn hours of 18 February 1942.

Tromp landed hits on both enemy ships but was also plastered by 5-inch shells from the Japanese tin cans and forced to retire.

The flotilla leader “Tromp” of the Royal Netherlands Navy, in dry dock at Cockatoo Island, for repairs after being damaged in action in the Java Sea. By Dennis Adams via AWM

Emergency repairs in Australia saved Tromp from the crushing Battle of the Java Sea at the end of February that saw the Dutch lose the cruisers Java and De Ruyter sunk and Doorman killed, effectively ending the defense of the East Indies.

After surviving the crucible, Tromp became known to her crew as “the lucky ship” which, when you realize what the Dutch went through in the Pacific, was apt.

The Dutch Navy lost 57 ships during WWII, and amazingly half of those were in the East Indies in the scant four-month period between 15 December 1941- 15 March 1942. These included the two aforementioned cruisers, eight submarines, six destroyers, and 15 smaller escorts (minelayers, gunboats, minesweepers). Even the old coast defense ship, De Zeven Provinciën was sunk at her moorings in Surabaya harbor. In contrast, the country only lost 16 ships in May 1940 when metropolitan Holland fell to the Germans.

Based out of Newcastle and later Fremantle, Australia, Tromp was augmented by several Bofors 40mm and Oerlikon 20mm mounts, given a series of surface and air warning radars, and served as a convoy escort and patrol vessel in and around Australian waters, picking up the U.S. Measure 22 camo in her work with the 7th Fleet. 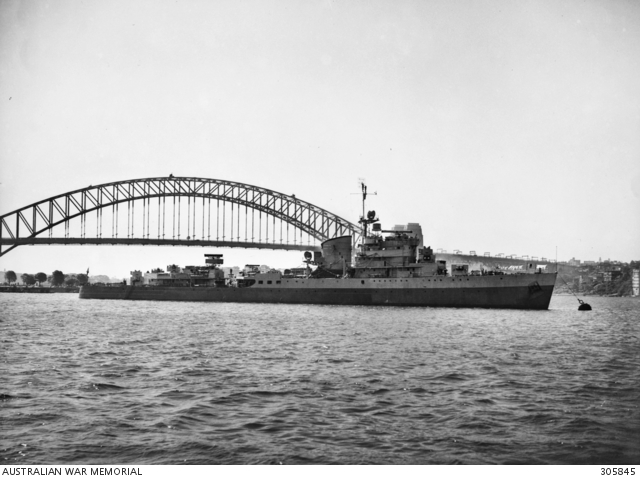 Sydney, NSW. C.1943. Starboard side view of the Dutch flotilla cruiser Tromp. The splinter-type camouflage scheme worn earlier in the war has been replaced by the American measure 22 scheme, the colors probably consisting of navy blue below haze grey. Note the searchlight position on the foremast above which an American SC radar has replaced that carried earlier. Type 271 surface search radar is mounted before the mast. Amidships, above her torpedo tubes, twin AA machine guns, and a small rangefinder have been mounted in the space once occupied by her floatplane. The Sampson posts once fitted at the break of the forecastle have been replaced by 4-inch aa guns. Note the prominent rangefinder above the bridge. On the deckhouse, aft are twin Bofors 40 mm aa guns on triaxially stabilized hazemeyer mountings which were very advanced for the period. Single 20 mm Oerlikon aa guns are sited on the crowns of b and y turrets and abaft the bridge. (naval historical collection).

She was transferred to the control of the British Eastern Fleet in January 1944. Around this time, she swapped out her aging Dutch V53 torpedoes for British Mark 9s along with new mounts.

Tromp conducting anti-aircraft defense exercises with the assistance of a RAAF Consolidated Catalina flying boat off the West Australian coast via AWM.

When the Allies began pushing back into the East Indies, Tromp was there, plastering Surabaya and supporting the amphibious landing at Balikpapan in Borneo. In September 1945, as part of the end game in the Pacific, she landed Dutch Marines in Batavia to disarm the Japanese garrison and reoccupy the former colonial capital.

Tromp participated in magic carpet duty after the end of hostilities and returned to Holland for the first time since 1939, arriving at Amsterdam in May 1946, carrying 150 Dutch POWs liberated from Japanese camps.

Tromp was one of just two cruisers left in the Dutch Navy at the end of the war (the other being her sister), but she had seen hard service and carried an amalgam of Swedish, American, and British weapons and electronics, many of which were no longer supported.

Following a two-year overhaul that saw much of her armament removed, she served as an accommodation and training ship with a NATO pennant number.

The highlight of her post-war service was a few midshipmen cruises and attending the Spithead fleet review in 1953.

Tromp was decommissioned on 1 December 1955 and, after more than a decade in reserve status, was sold to be scrapped in Spain in 1969. Her half-sister, Jacob van Heemskerk, shared a similar fate and was scrapped in 1970.

Since then, her name has been reissued to the class leader of a group of guided-missile frigates (HNLMS Tromp F801) and in a De Zeven Provinciën-class frigate commissioned in 2003.

For more on Tromp‘s history, please visit NetherlandsNavy.NL, which has it covered in depth.