Posted on October 4, 2017 by laststandonzombieisland 2 comments 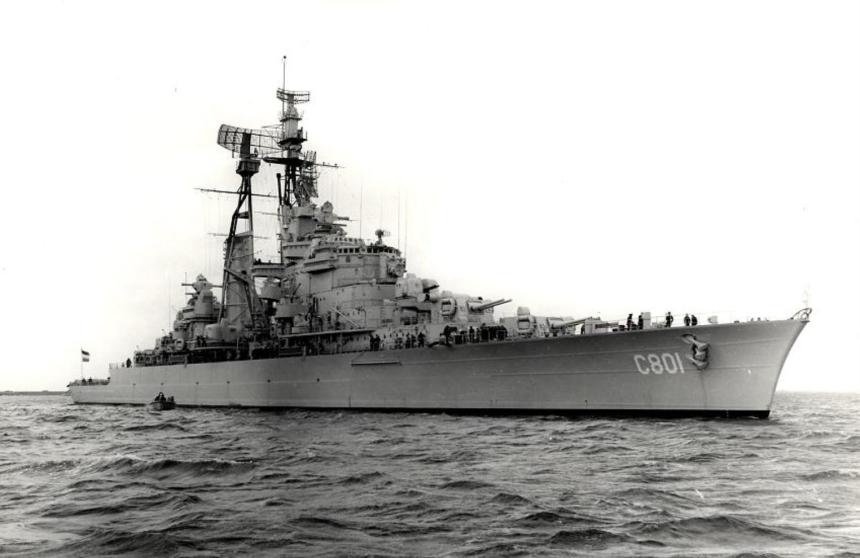 Note the WWII-style Carley rafts on the turrets

Here we see the De Zeven Provinciën-class light cruiser Hr.Ms. De Ruyter (C801) of the Dutch Koninklijke Marine as she appeared in 1953 while in her prime. Decommissioned last week an amazing 78 years after her first steel was cut, she was the last of the big-gun armed cruisers afloat on active duty.

The class of ship between destroyers and battleships, fast gun-armed cruisers have long been a staple of naval modern warfare since all-steel navies took to the sea. However, their large batteries of powerful guns were antiquated by the second half of the 20th century.

Fast armored cruisers, a product of the late 19th century, were designed to serve as the eyes of the main battle fleet. Large enough to act independently, they sailed the world and showed their country’s flag in far-off ports in peace. During war, they were detailed to raid commerce and serve as fleet units. Over 60 years, more than 200 cruisers were placed in service and sailed in almost every fleet in the world. Fast enough to outrun battleships but not outfight them, they soon were obsolete after World War II and their days were numbered.

But the hero of our tale has a pass, as she was planned before WWII started.

HNLMS De Ruyter was laid down on 5 September 1939 at Wilton-Fijenoord, Schiedam, just 96-hours after Hitler invaded Poland. Part of the planned Eendracht-class of light cruisers which were to defend the far-flung Dutch East Indies from the Japanese, her original name was to be De Zeven Provinciën while her sister, laid down at the same time in a different yard, would be Eendracht.

The ships were to mount 10 5.9-inch Bofors but these guns were still in Sweden when the Germans rolled in in 1940 which led to their being confiscated by the Swedes and promptly recycled into their new Tre Kronor-class cruisers, stretched to accommodate the Swedish standard 6-inch shell.

Though the Germans tried to complete the two cruisers for use in their own Kriegsmarine, Dutch resistance hindered that effort and by the end of the war, they were still nowhere near complete.

After languishing in the builder’s yard for 14 years, De Zeven Provinciën was finished as De Ruyter and joined the Dutch Navy on 18 November 1953.

The name is an ode to the famous 17th-century Dutch Admiral Michiel Adriaenszoon de Ruyter, for which no less than five prior Dutch warships had been named since 1799. The most recent of which was used by Rear-Admiral Karel Doorman in his ride to Valhalla during the Battle of the Java Sea in 1942. 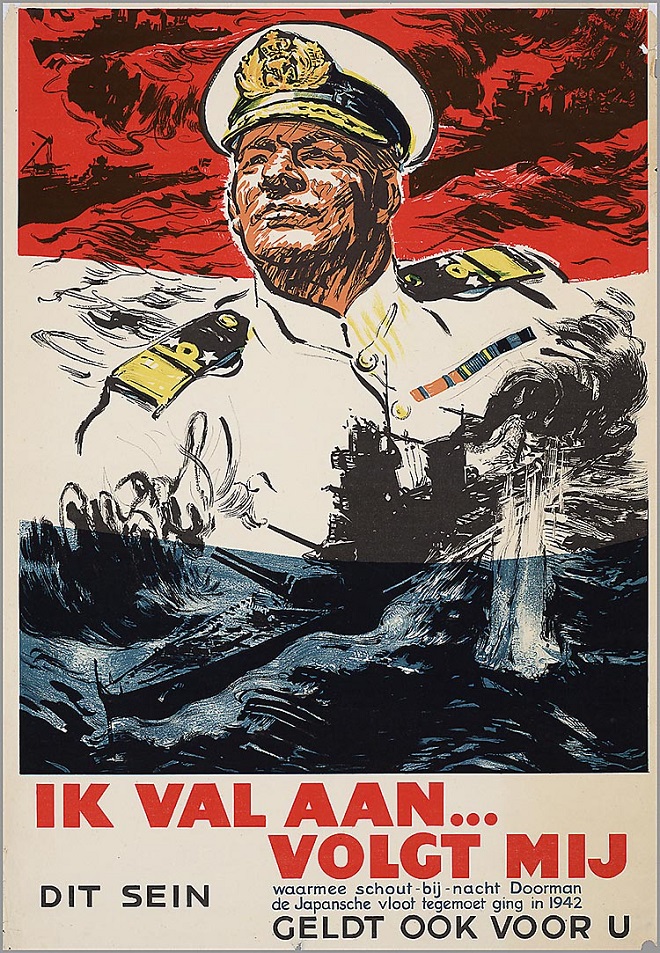 Though considered light cruisers because of their armament of eight redesigned 15.2 cm/53 (6″) Model 1942 guns, these craft went well over 12,000-tons when full. The turrets, conning tower, and main engineering spaces were armored with up to five inches of steel plate, among the last non-carriers completed in the world to carry such protection. Designed originally for Parsons geared steam turbines and a half-dozen Yarrow boilers, they were instead completed with De Schelde-Parsons turbines and four Werkspoor-Yarrow boilers giving them a 32-knot speed and 7,000nm range.

Already cramped due to extensive AC-cycle electronics suites they were never planned to have (the 1939 design was DC), and built with the resulting need for a 900-man crew rather than the planned 700 souls in 1939, they never received their large AAA battery, seaplane catapults, and torpedo tubes, relying instead on a secondary armament of eight radar-controlled 57mm/60cal Bofors in four twin mounts.

De Ruyter‘s sistership Eendracht was instead completed as De Zeven Provinciën and they commissioned within weeks of each other just after the Korean War came to a shaky ceasefire. 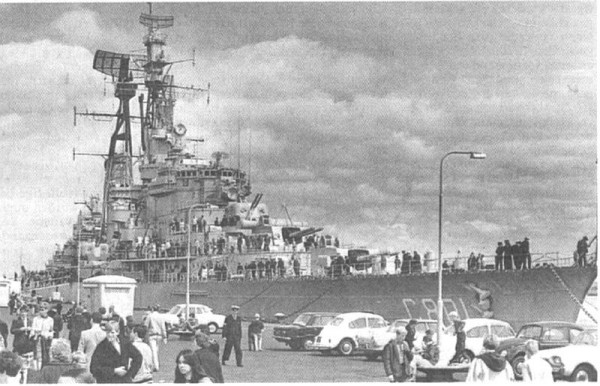 The two ships served extensively with NATO forces and provided some insurance to Dutch interests during the tense standoff with Indonesia during the decade-long West New Guinea dispute — which could have seen the Indonesian Navy’s only cruiser, the Soviet-built KRI Irian, formerly Ordzhonikidze, face off with the Dutch in what would have been the world’s last cruiser-on-cruiser naval action. 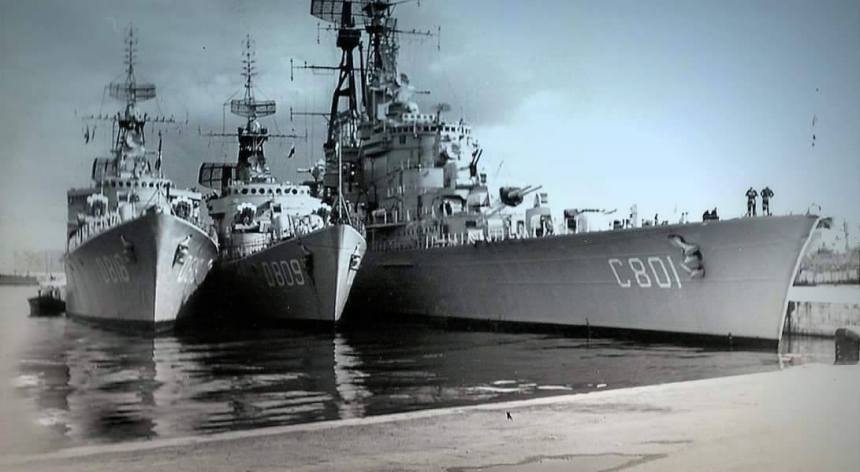 However, the age of navies running big gun warships was in the twilight.

The Soviets maintained as many as 13 of the huge 16,000-ton Sverdlov class cruisers, armed with a dozen 6-inch guns as late as 1994 when the last one (the famously wrecked Murmansk) was finally removed from their navy list.

The Russians beat the U.S. by more than a decade as the last all-gun armed cruiser on the Navy List was USS Newport News (CA–148), struck 31 July 1978. The last big gun cruiser in U.S. service was USS Albany (CA-123) which had been reworked to a hybrid missile boat (CG-10) to be decommissioned in 1980 and struck five years later. An 8-inch armed destroyer, USS Hull, removed her experimental Mk.71 mount in 1979. Since then, it’s been a world of 5-inchers for U.S. cruisers and destroyers.

As for the Royal Navy, losing their heavies in the 1950s and their few remaining WWII-era light cruisers soon after, they decommissioned their two Tiger-class cruisers in the 1970s, disposing of them in the 1980s.

The navies of South America were the last to operate big gun-armed cruisers. Which brings us to the story of De Zeven Provinciën and De Ruyter‘s second life. 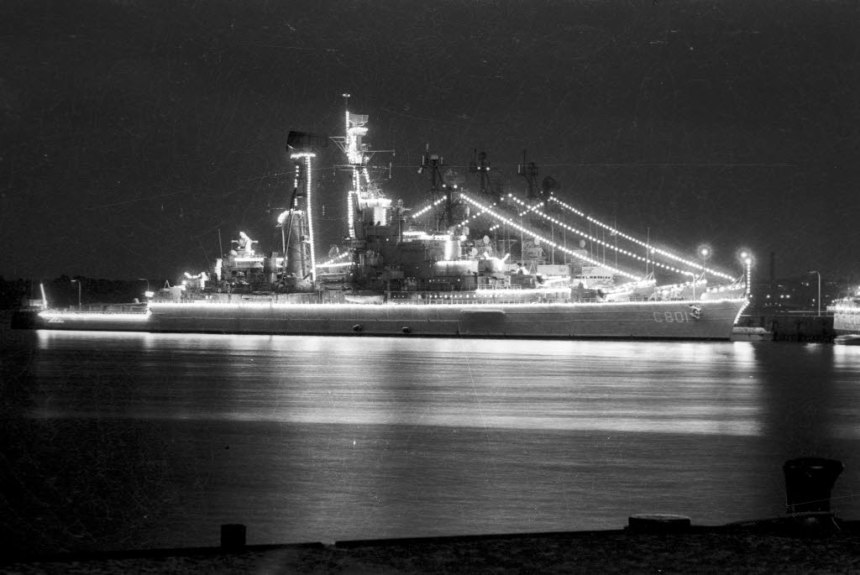 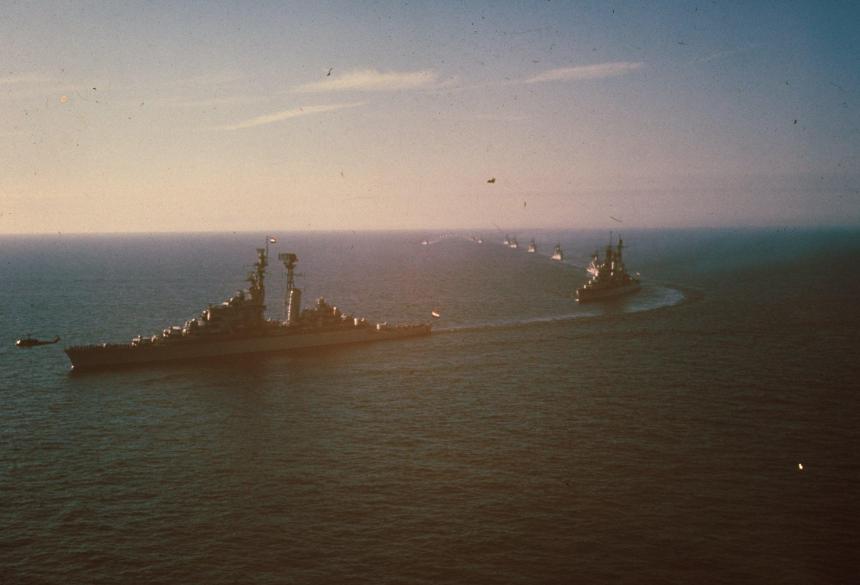 With the ABC powers (Argentina, Brazil, and Chile) all packing large former U.S. cruisers in their fleets, Peru went shopping in the early 1970s for some parity and bought the two Dutch cruisers for a song between 1972-75. De Ruyter was bought first and became fleet flagship BAP Almirante Grau (CLM-81) after the national naval hero, replacing the old Crown Colony-class light cruiser HMS Newfoundland which carried the same name. DZP was picked up later and became BAP Aguirre. 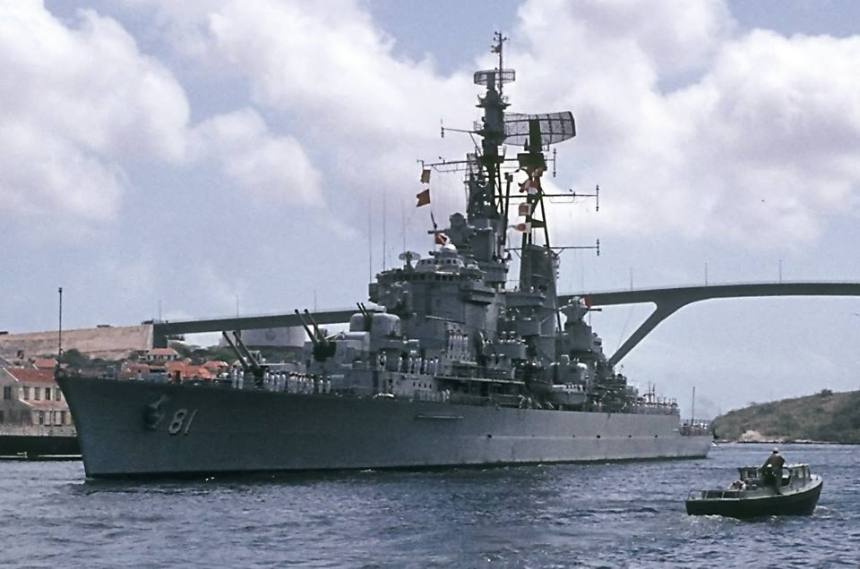 Cruiser Almirante Admiral Grau, the flagship of the war navy of Peru, during its incorporation in 1973.

For a decade, this gave the Peruvians a good bit of prestige, and as the ABC navies shed their older vessels (all WWII-era), the much newer Dutch ships continued to give good service. 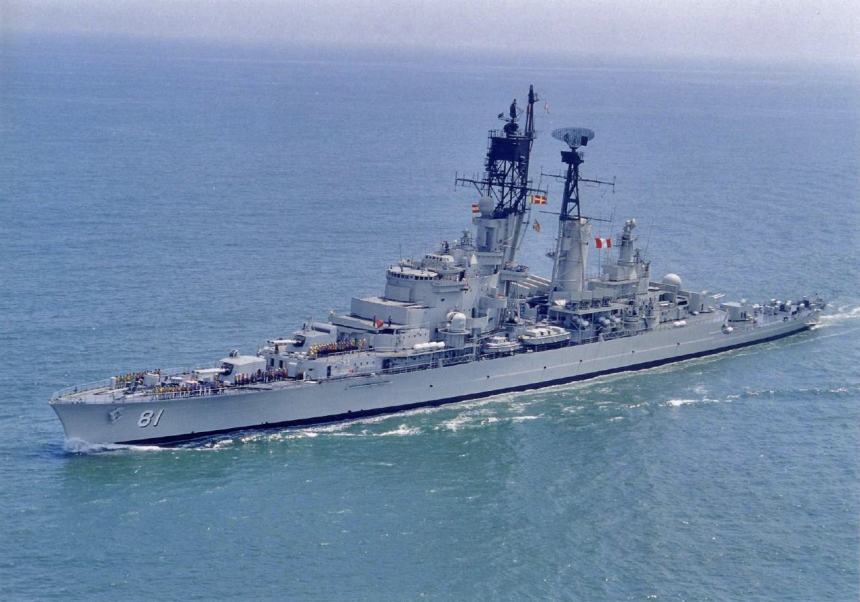 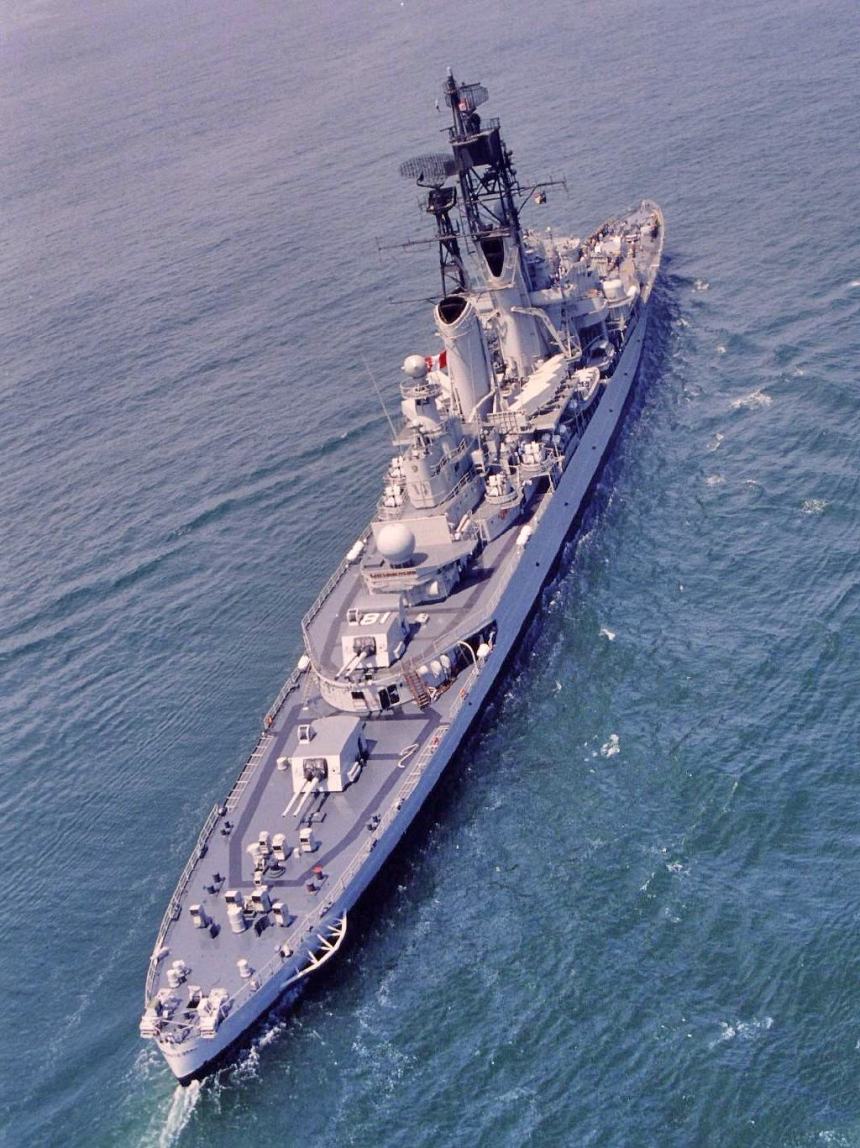 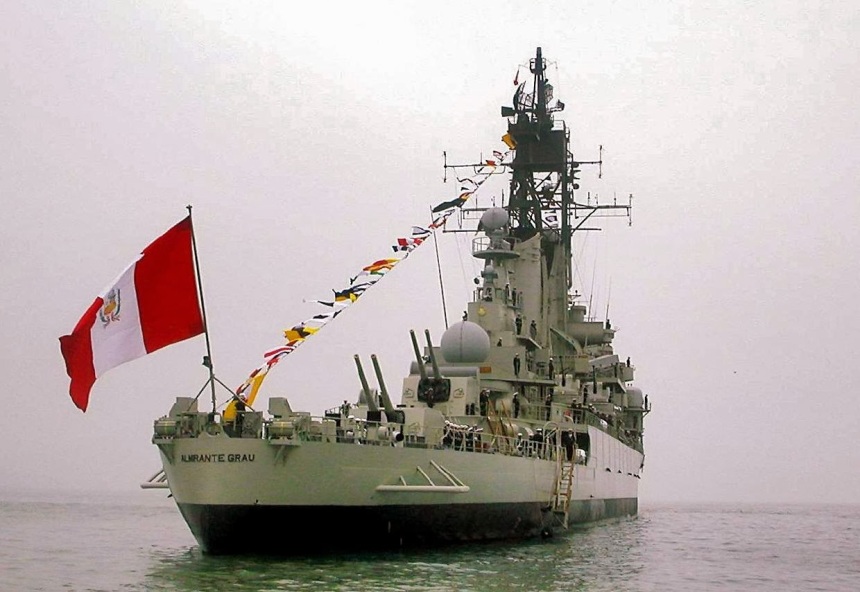 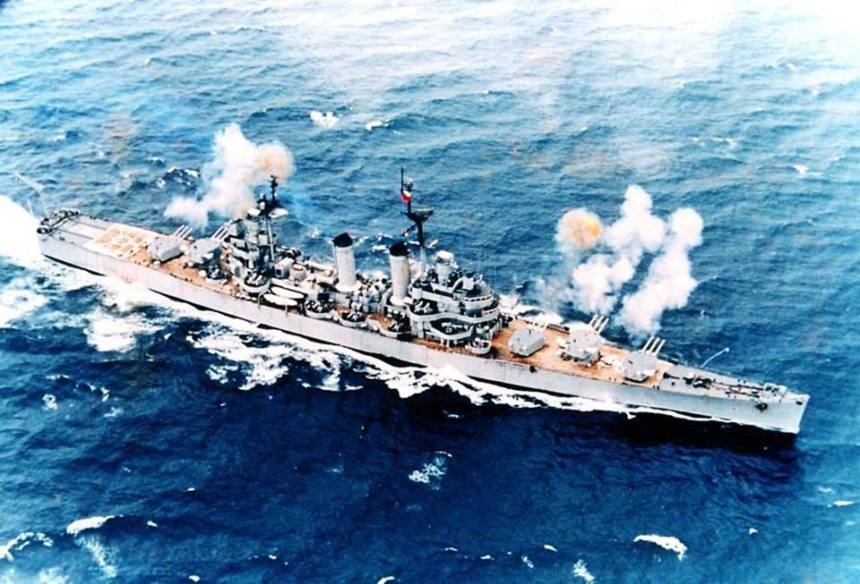 Sistership to the O’Higgins was the ARA General Belgrano (ex-USS Phoenix CL-46) flagship of the Argentine navy for thirty years until she was deep-sixed by a British submarine in the 1982 Falkland Islands War. Brazil also had a pair of ex-Brooklyn class cruisers, which they operated until the 1970s.

To keep her sister alive, DZP/Aguirre was paid off in 2000, her parts used to keep De Ruyter/Grau in operation.

Ever since the battleship USS Missouri was struck on 12 January 1995, the eight Bofors 152/53 naval guns mounted on Almirante Grau were the most powerful afloat on any warship operated by any navy in the world. A record she went out with after holding for 22 years– a proud legacy of another generation and the end of an era.

Given an extensive refit in 1985 and other upgrades since then, she carried new Dutch electronics, updated armament including Otomat anti-ship missiles, and 40L70 Dardo rapid-fire guns, and in effect was the cruiser equivalent of the Reagan-era Iowa-class battleships. 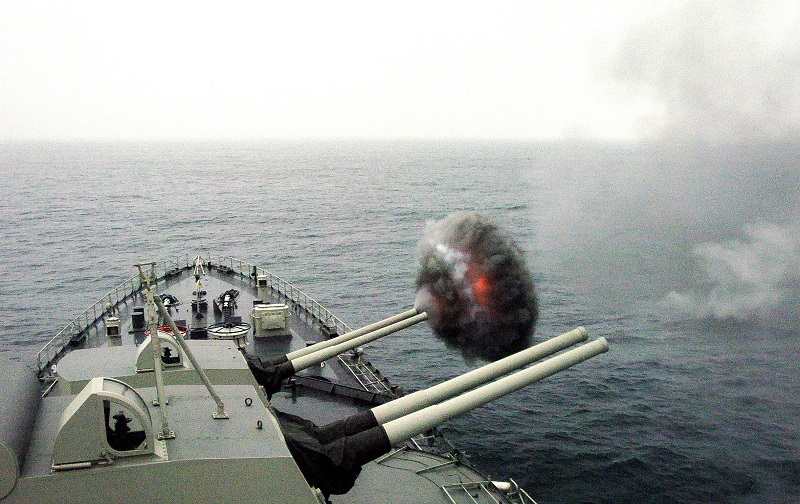 A detailed look at her modernized scheme via Naval Analyses: 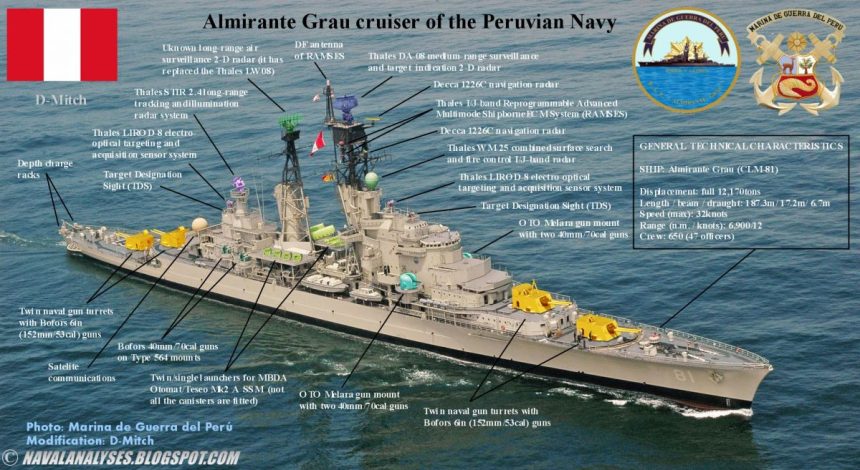 The Dutch still revere the name De Ruyter with a Tromp-class guided-missile frigate commissioned as the 7th ship with the handle in 1975 and a new De Zeven Provinciën-class frigate, the 8th De Ruyter, placed in service in 2004.

Showing her age, and still requiring at least a crew of 600 even after modernization, the Peruvian cruiser with former Dutch and one-time German ownership papers was placed in reserve status in 2010, maintained from sinking but not much else. However, she still served a purpose as a pierside training and flagship.

She is also remembered in Dutch maritime art. 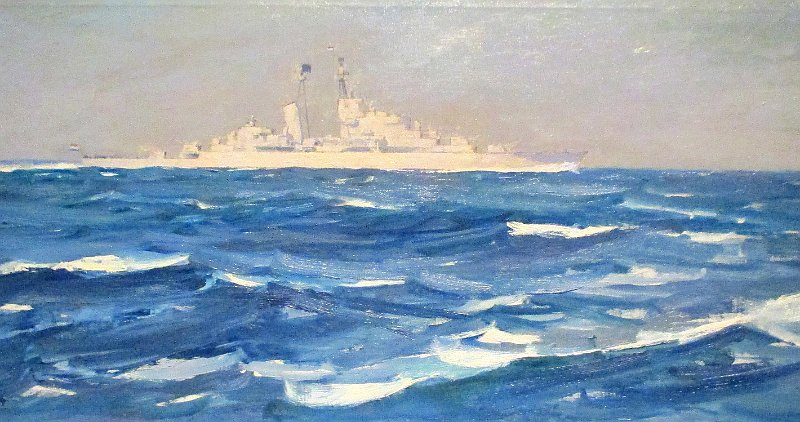 Now, the end has come. She was decommissioned last week, though she is reportedly in poor condition and hasn’t been to sea in nearly a decade. 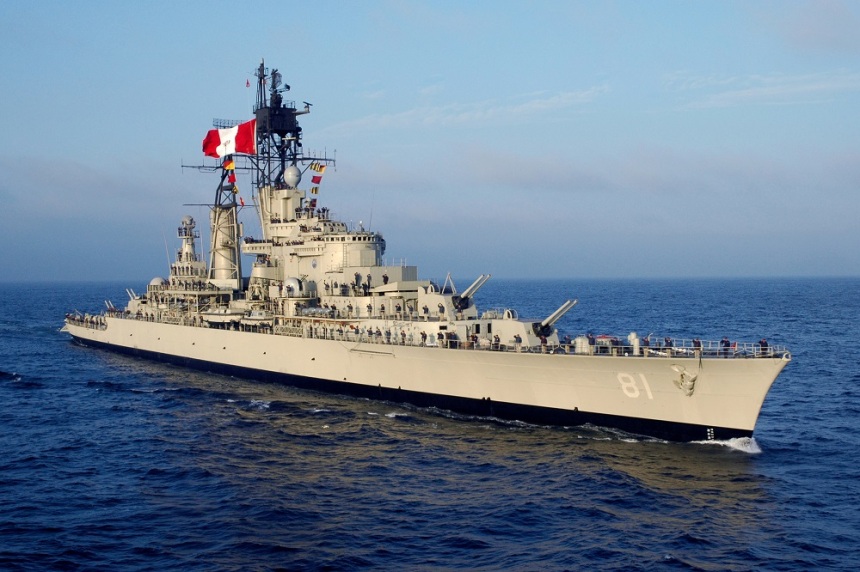 Word on the street is that she will be kept as a floating museum, perhaps at the Naval Museum in Callao, but concerns about asbestos, chemicals dating back to the 1930s, and lead paint may derail that.

Still, she has gone the distance.