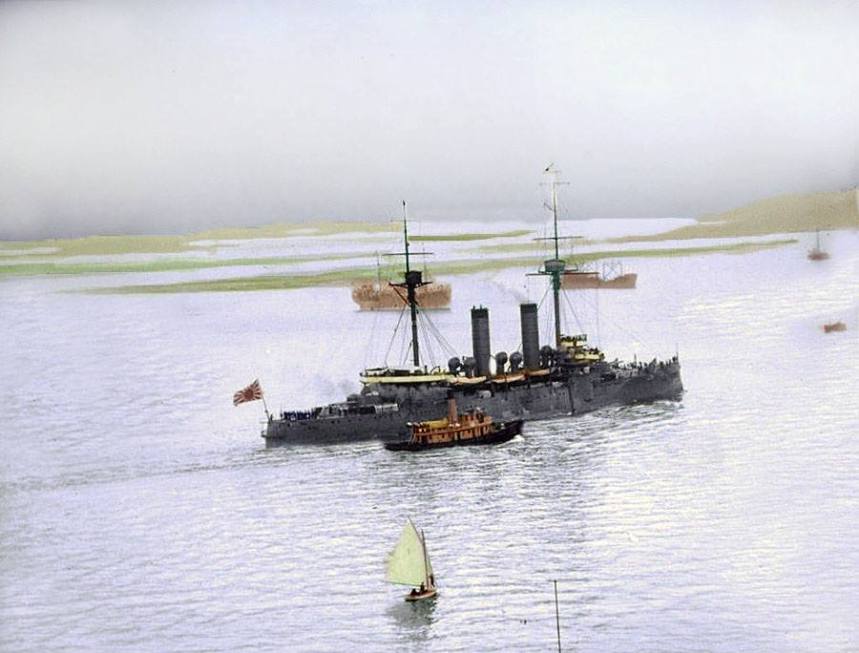 Photo by famed Boston Herald cameraman Leslie Jones via The Boston Public Library, colorized by my friend and the most excellent Postales Navales https://www.facebook.com/Postales-Navales-100381150365520/

Here we see the lead ship of her class of Japanese armored cruisers, IJN Asama, leaving Boston harbor for New York, 26 September 1927, during a happier time in Japanese-U.S. relations. She held her head high in three wars, taking on all comers, and in the end, from her award date to the time she was broken, she gave the Empire a full half-century of service.

Ordered as part of the “Six-Six Fleet” in the days immediately after the Japanese crushed the Manchu Chinese empire on the water in 1894-95, Asama (named after Mount Asama) and her sistership Tokiwa were ordered from Armstrong Whitworth in Britain.

Some 9,700-tons and carrying a mixture of Armstrong 8-inch/45cal main guns and Elswick 6″/40 secondaries, these two 21-knot cruisers were meant to scout for the new battleships also ordered from her London ally to counter the growing Imperial Russian Navy’s Pacific fleet– remember at the time the Tsar had just cheated the Japanese out of Port Arthur and was eyeing both Manchuria proper and Korea as well. They were designed by naval architect Sir Philip Watts as an update to his 8,600-ton Chilean cruiser O’Higgins. 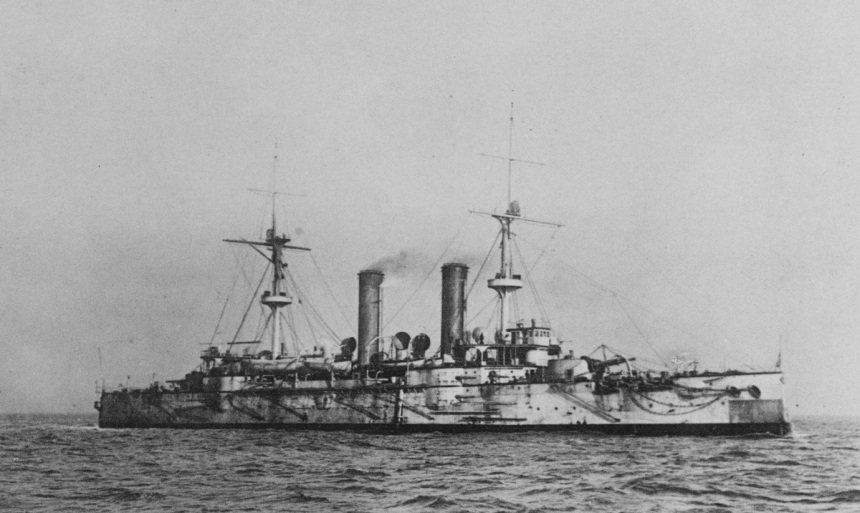 Completed within six weeks of each other in the Spring of 1899, the two Japanese first-class cruisers were considered a success from the start– Asama made 22.1 knots on trials– and arrived at Yokosuka by Summer. Emperor Meiji himself, the nation’s 122nd, used Asama for his flagship during the Imperial Naval Review in 1900 and the ship was dispatched back to Britain two years later for the Coronation Review for King Edward VII at Spithead.

When war came she was in the vanguard.

The very first surface engagement of any significance, besides the opening raid on Port Arthur itself, saw Asama and a host of other cruisers under RADM Uryū Sotokichi confront the Russian cruiser Varyag and the gunboat Korietz in Chemulpo Bay, Korea on 9 February 1904.

The action did not go well for the Russians, with both of the Tsar’s ships on the bottom at the end of the fight and no “official” casualties reported by the Japanese.

Asama later engaged the ships of the 1st Russian Pacific Squadron at the Battle of the Yellow Sea in August and the 2nd and 3rd Squadrons (the former Baltic Fleet) in the much more pivotal carnage of Tsushima. In the latter, she traded shots with the Russian battlewagon Oslyabya and came away with three 12-inch holes in her superstructure to show for it. Following the war, Meiji once again used Asama to review his victorious fleet in Tokyo Bay despite more powerful and modern ships being available for the task.

Her next war found Asama searching for German surface raiders and Adm. Von Spee’s Pacific Squadron in August 1914, a task that brought her across the Pacific and in close operation with British and French allies– as well as cautious Americans. In was in Mexican waters on 31 January 1915 that she holed herself and eventually grounded, her boiler room flooded.

Photographed off the Mexican Pacific coast (possibly Mazatlán) from aboard USS RALEIGH (C-8, 1892-1921). The original caption states, “RALEIGH standing by until ASAMA leaves harbor” and also that the ASAMA was aground. ASAMA does appear slightly down by the head here. Description: Catalog #: NH 93394

It wasn’t until May that she was refloated with the help of a crew of shipwrights from Japan and, after more substantial repairs at the British naval base in Esquimalt BC, she limped into the Home Islands that December, her war effectively over until she could be completely refit and given new boilers, a job not completed until March 1917.

After the war, the historic ship was converted to a coast defense vessel to take away her cruiser classification (the Naval Treaties were afoot) with the resulting removal of most of her 8-inch and 6-inch guns. She then was tasked throughout the 1920s and 30s with a series of long-distance training cruises which saw her roam the globe– that is where our Boston picture at the top of the post comes from.

Photo by famed Boston Herald cameraman Leslie Jones via The Boston Public Library, showing Asama in Boston Harbor in front of the Custom House Tower, Sept 1927. This was during Prohibition and several USCG 75-foot cutters are seen in the foreground.

Then came the night of 13 October 1935, when, while operating in the Inland Sea north north-west of the Kurushima Strait, she ran aground again and was severely damaged. Though repaired, her hull was considered too battered to continue her training cruises and she was converted to a more sedate pierside role at Kure as a floating classroom for midshipmen.

When her third war came in 1941, she was used as a barracks ship and largely disarmed, her guns no doubt passed on to equip new and converted escort craft. She avoided destruction by the Allies and was captured at the end of the war, eventually stricken on 30 November 1945.

The old girl was towed away and scrapped locally in 1947 at the Innoshima shipyard.

Her sister, Tokiwa, was converted to a minelayer and sowed thousands of those deadly seeds across the Pacific. Up armed with batteries of AAA guns and air search radars, she made it through the war until 9 August 1945 when she was plastered by dive bombers from TF38 while in Northern Japan’s Mutsu Bay and beached to prevent losing her entirely. She was scrapped in Hokkaidō at the same time as Asama. 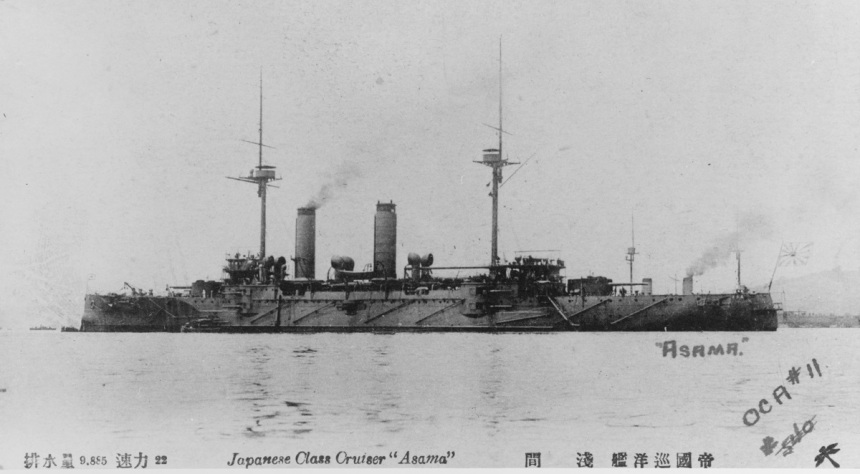