The story of the Millionth Garand

Canadian-born firearms engineer Jean Cantius Garand went to work at the U.S. Army’s Springfield Armory in 1919 and age 29 and remained on the job until he retired in 1953. While he had a hand in a number of projects over that 34-year period, it was his semi-auto M1 rifle, adopted by the military on the eve of World War II, that he is best remembered for. Rather than send Garand off with a gold watch at his retirement party, Secretary of Army Robert Stevens authorized SA to give him one of their noteworthy M1s from the arsenal’s museum.

Secretary of Army Robert Stevens presents John Garand with an M1 Garand rifle at his retirement in 1953. Note the deep grain in the walnut

And it is still beautiful (and up for auction) today. 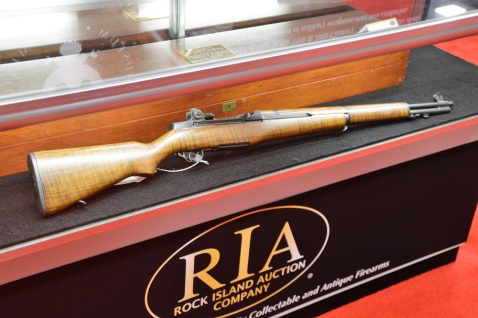 You can really tell see those beautiful, distinctive tiger stripes in any photo. This is one I took when I inspected the piece back in March.

Hopefully, it will be bought by a museum or a philanthropist willing to put this national treasure on public display.