Around the 1900s, the French firm of Schneider-Creusot, or Schneider et Cie, or simply just Schneider, was a steam-era industrial powerhouse. Starting off with locomotives and the Creusot steam hammer generation before, the company soon branched out into munition with their small and medium-caliber Canet guns for French-built warships and the famous “French 75,” the Canon de 75 modèle 1897, which would be the staple field gun of the coming Great War for her country.

By the 1910s, the company was regularly making bigger guns in 107, 120, 122, 152 and 155mm respectively, with guns and mortars of up to 280mm on the drawing board. Following a substantial contract for stubby 152mm howitzers to the Tsar in 1909 (with the local Putilov firm making them through 1919 in Eastern Europe), Schneider reworked the mount to take a 155mm bore tube and shopped it to the home team who adopted it in 1915. The aptly named Canon de 155 C modèle 1915 Schneider became the standard heavy howitzer of the French Army, who kept it in service through the Vichy era and sold spares to Allies in Belgium and Portugal.

Speaking of Allies, when the U.S. entered the war and went heavily into French and British weaponry (the main rifle of the AEF was the British-contract P14 Enfield modified for 30.06, while the principal LMG was the French Chauchat for better or worse and the primary field gun was the French 75 backed up by the French GPF), the U.S. dutifully ordered 155mm Schneiders as well.

The M1917/M1918 Schneider gun used by the U.S. was an interrupted-screw breech, 155mm bore, 13.4-caliber, built-up nickel steel cannon on a two different carriages with the first model (made in France) having a curved shield and metal tires coupled to a continuous-pull firing mechanism while the latter (U.S.-made variant) used a straight shield and pneumatic tires with a firing lock mechanism. In each variant, the total weight was about 7,600-pounds.

A total of 3,008 were bought or built with U.S. guns made under license by the American Brake Shoe Co. on carriages by Osgood-Bradley Car, using recoil mechanisms made in Detroit by Dodge. 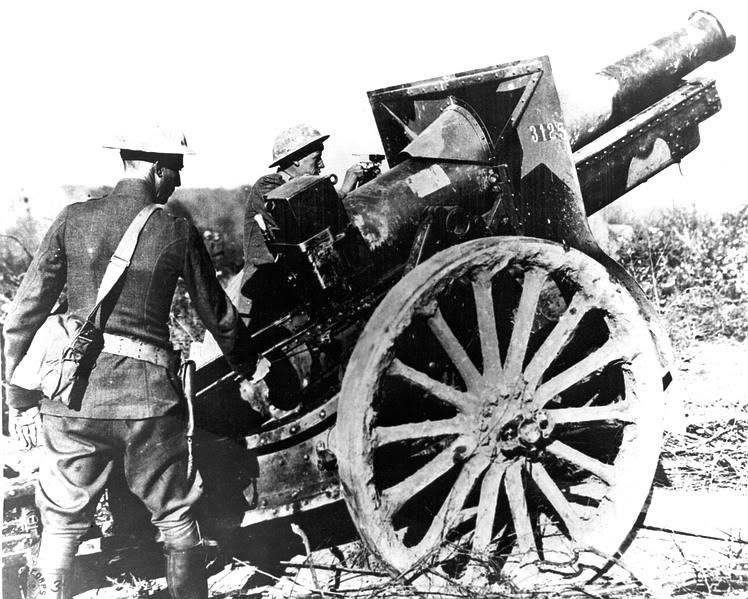 Canon de 155 C modèle 1917 (Schneider et Cie); the curved shield and metal tires indicate that this was taken in 1918 (in France). The American produced model, 155mm Howitzer Carriage, Model 1918 (with straight shields and rubber tires) didn’t make it into action before the end of the war. The cannon cockers are wearing the M1909 holster for M1917 .45 revolver.

The last American shot fired during the Great War was fired by a 155mm Schneider howitzer called Calamity Jane, of the 11th Field Artillery Regiment.

WWI, 1918 – The French-made artillery piece, nicknamed “Calamity Jane,” operated by a crew from the US 11th Artillery Brigade, that fired the last shot of the war for the Allies near Laneuville sur Meuse, France, November 11, 1918.

SGT James B. Aets uses a quadrant to determine the elevation of the 155mm Howitzer M1918, while CPL Charles J. Hines sights on the aiming stake. Circa 1930s. Note the straight shield and rubber combat tires of the U.S.-built model. Photo courtesy the National Archives

Another photo of the 11th FA, taken in 1936 while the unit was located in Hawaii. These artillerymen are armed with M1911 pistols carried in M1916 holsters. 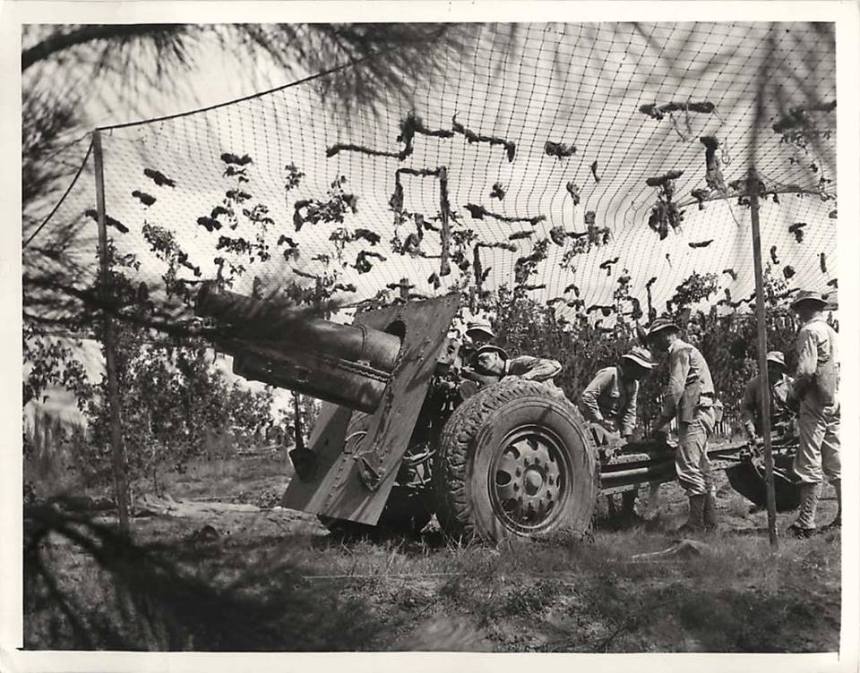 The M1917/1918s were used extensively in WWII by both the Army and Marines (as well as Allies in Australia and the PPhilippines) who appreciated the compact howitzers for use in island hopping during which their 7-mile range was not a handicap.

An M1918 155mm howitzer is fired by artillery crewmen of the 11th Marines in support of ground forces attacking the enemy, Guadalcanal, 1942. Despite the lack of sound-flash equipment to locate hostile artillery. Col del Valle’s guns were able to quiet enemy fire. Department of Defense (USMC) Photo 61534

Below is a surviving example I ran across outside of a VFW in Wetumpka, Alabama. 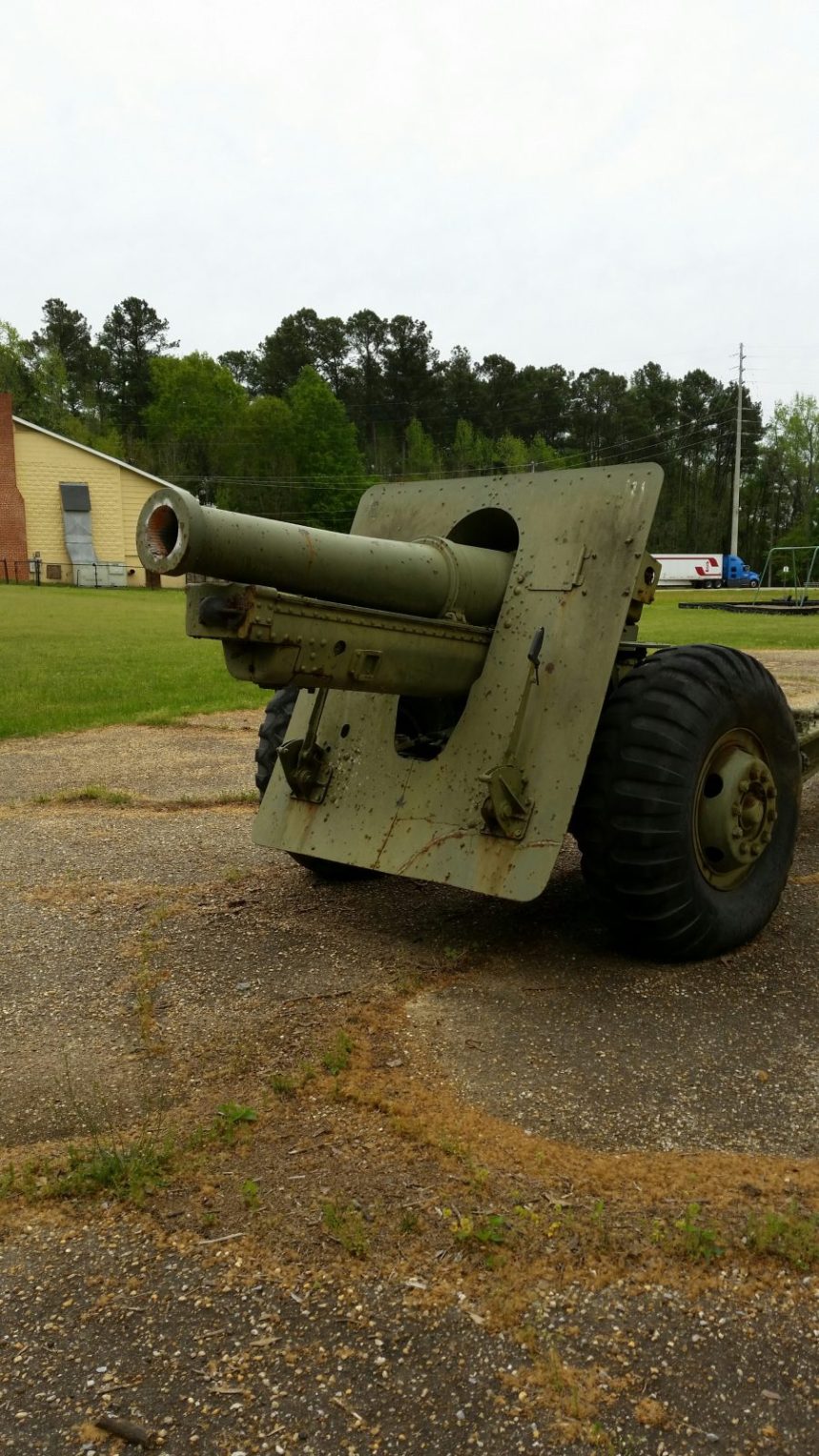 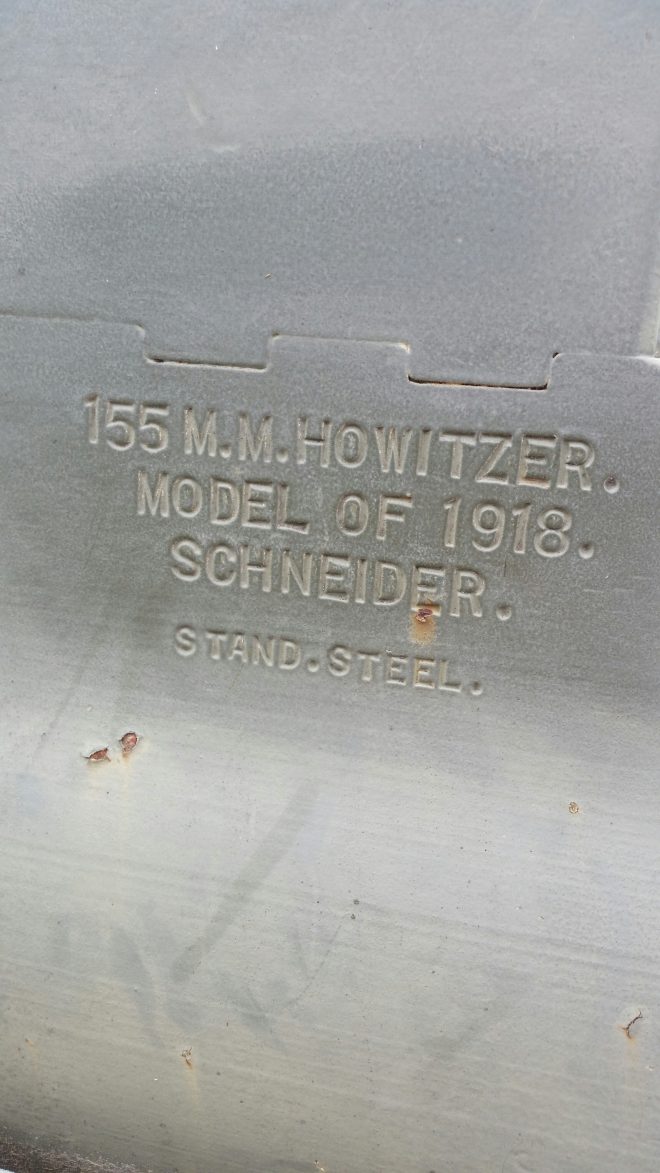