Posted on July 31, 2019 by laststandonzombieisland 2 comments

Here we see a crooked image from the files of the U.S. Office of Naval Intelligence, likely a quick snapshot taken from the deck of a rented junk, showing the coastal defense ship (formerly classified as an armored cruiser, or junjokan) Nisshin of the Imperial Japanese Navy as she sat at a Hong Kong mooring buoy, in October 1920. Note the Emperor’s chrysanthemum marking on the bow, and inquisitive members of her crew on the side– likely wondering just who was in the approaching small boat with the camera. You wouldn’t know it to look at her, but this ship had once gone toe-to-toe with a much larger opponent and come out on top, although with the scars to show it.

If you like that photo, how about another two taken the same day, with her crew’s laundry drying and a picturesque junk added for Hong Kong flavor:

Built around the turn of the Century by Gio. Ansaldo & C shipbuilders, Genoa, Italy, as an updated version of the Giuseppe Garibaldi armored cruiser class, Nisshin (or Nissin, a name that roughly translates to “Japan”) was designed by Italian naval architect Edoardo Masdea as a vessel only smaller than a 1st-rate (pre-dreadnought) battleship of the era, yet larger and stronger than most cruisers that could oppose it.

The Garibaldi class was innovative (for 1894,) with a 344-foot long/7,200-ton hull capable of making 20-knots and sustaining a range of more than 7,000 nm at 12 when stuffed with enough coal. Although made in Italy, she was almost all-British from her Armstrong batteries to her Bellville boilers, Whitehead torpedoes, and Harvey armor.

Armored with a belt that ran up-to 5.9-inches thick, Garibaldi could take hits from faster cruisers and gunboats while being able to dish out punishment from a pair of Elswick (Armstrong) 10-inch guns that no ship smaller than her could absorb. Capable of outrunning larger ships, she also had a quartet of casemate-mounted torpedo tubes and extensive rapid-fire secondary batteries to make life hard on the enemy’s small ships and merchantmen.

These cruisers were designed for power projection on a budget and the Argentine Navy, facing a quiet arms race between Brazil and Chile on each side, needed modern ships. They, therefore, scooped up not only the Garibaldi (commissioned in 1895) but also the follow-on sister-ships General Belgrano and General San Martín (built by Orlando of Livorno in 1896) and Genoa-made Pueyrredón (1898) to make a quartet of powerful cruisers. These ships, coupled with a pair of battleships ordered later in the U.S., helped make the Argentine navy for about two decades the eighth most powerful in the world (after the big five European powers, Japan, and the United States), and the largest in Latin America.

The design was well-liked, with Spain moving to buy two (but only taking delivery of one in the end, the ill-fated Cristóbal Colón, which was sunk at the Battle of Santiago de Cuba during the Spanish American War) and Italy electing to purchase five further examples of the type.

Why all the talk about Argentina and Italy?

Well, because Nisshin and her sistership Kasuga were originally ordered by the Italians in 1900 as Mitra (Yard #130) and Roca (#129), respectively, but then sold while still on the ways to Argentina to further flesh out the fleet of that South American country’s naval forces, who dutifully renamed them Mariano Moreno and Rivadavia.

At some 8,500-tons (full), these final Garibaldis were 364-feet long overall and were roughly the same speed and carried the same armor plan (with Terni plate) as their predecessors.

However, they differed in armament, with Mitra/Rivadavia/Kasuga carrying a single 10-inch EOC gun forward and twin 8″/45s aft, while Roca/Moreno/Nisshin carried the twin 8-inchers both forward and aft.

[Of note, the same 8-inch EOC guns were also used on other British-built Japanese armored cruisers (Adzuma, Asama, Iwate, Izumo, Tokiwa, and Yakumo) so they weren’t too out of place when Japan took delivery of these ships in 1904 instead of Argentina.]

Both Mitra/Rivadavia/Kasuga and Roca/Moreno/Nisshin were launched, fitted out and ran builders’ trials in Italy under the Argentine flag.

Nisshin Running trials under the Argentine flag, probably in late 1903, just before her purchase by the Japanese NH 58664

Running trials under the Argentine flag, probably in late 1903, just before her purchase by the Japanese. Photo credited to her builder Ansaldo. NH 58665

With the Japanese and Imperial Russia circling each other tensely in late 1903, and Argentina not really wanting to take final delivery of these new cruisers, Buenos Aries shopped them to the Tsar’s kopeck-pinching Admiralty only to be rebuffed over sticker shock, leaving the Tokyo to pick them up for £760,000 each– considered a high price at the time but a bargain that the Russians would likely later regret. The Argentines would later reuse the briefly-issued Moreno and Rivadavia names for their matching pair of Massachusetts-built battleships in 1911. 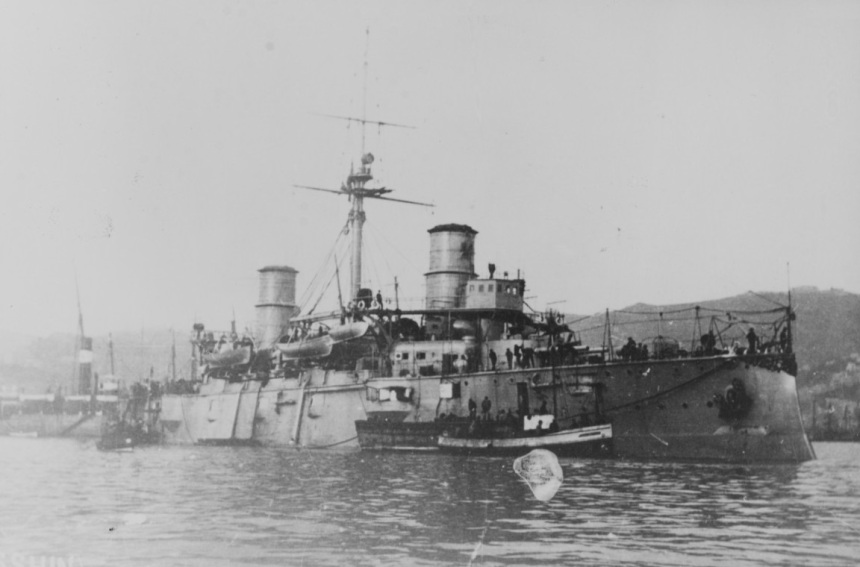 With a scratch British/Italian contract delivery crew, Kasuga and Nisshin (their names are taken from Meiji-period steam warships of the 1860s) set sail immediately for the Far East and were already outbound of Singapore by the time the balloon finally went up between the Russians and Japanese in February 1904. The sisters were soon in the gun line off Russian-held Port Arthur, lending their fine British-made batteries to reducing that fortress, and took part in both the ineffective Battle of the Yellow Sea in August 1904 (where Nisshin was lightly damaged) and the much more epic Battle of Tsushima in May 1905.

Carrying the flag of VADM Baron Misu Sotarō, Nisshin fired something on the order of 180 heavy shells during Tsushima, exchanging heavy damage with the 15,000-ton Russian battleship Oslyabya and others– taking several 12-inch hits to show for it. The Japanese cruiser had three of her four 8-inch guns sliced off and a number of her crew, to include a young Ensign Isoroku Yamamoto, wounded. The future commander-in-chief of the Combined Fleet during World War II had the index and middle fingers on his left hand shorn off by a splinter, earning him the wardrobe nickname “80 sen” as a manicure cost 10 sen per digit at the time.

From a different angle

Oslyabya, in turn, was ultimately lost in the course of the battle, taking the Russian Squadron’s second-in-command, Capt. Vladimir Ber, and half of her crew with her to the bottom of the Korea Strait. 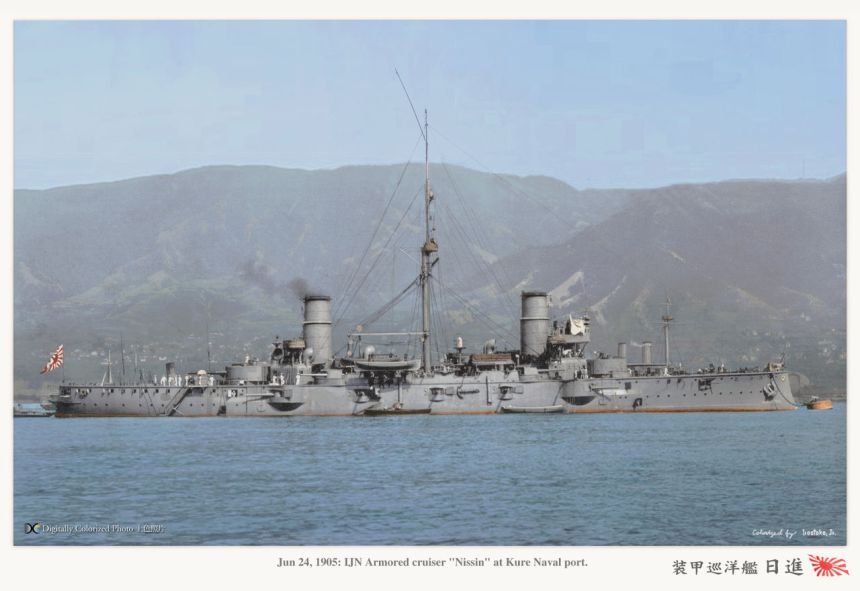 Japanese cruiser Nisshin, listed as June 24, 1905, at Kure, which is just a month after Tsushima and may be an incorrect date as she looks almost brand new. Colorized photo by Atsushi Yamashita/Monochrome Specter http://blog.livedoor.jp/irootoko_jr/

For both Kasuga and Nisshin, Tsushima was their brightest moment under the Rising Sun.

Greatly modified later with Japanese-made Kampon boilers replacing their Italian ones, along with a host of other improvements, Kasuga went on to serve as a destroyer squadron flagship in World War I looking out for German surface raiders and escorting Allied shipping between Australia and Singapore. She later took Imperial troops to Vladivostok in 1918 as part of the Allied Intervention into the Russian Civil War. 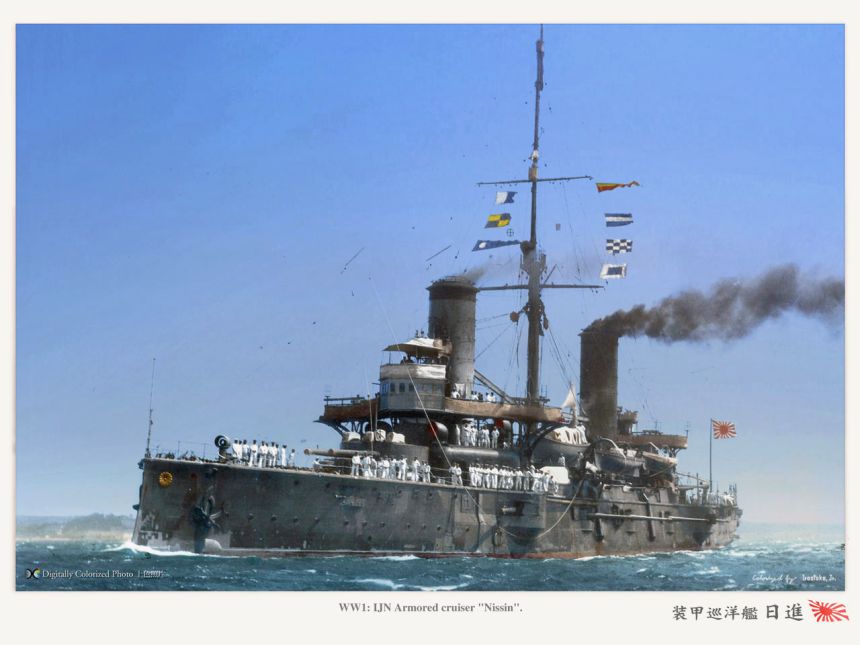 As for Nisshin, she also spent her time as a destroyer squadron leader on the lookout for the Kaiser’s wolves and was later dispatched to the Mediterranean as part of the Japanese 2nd Special Squadron (Suma-class cruiser Akashi, the cruiser Izumo, 8 Kaba-class destroyers and 4 Momo-class destroyers). Deployed in late 1917, the squadron was tasked with riding shotgun over Allied troopships steaming between Malta and Salonica and from Alexandria to Taranto and Marseille.

In all, the force escorted nearly 800 ships and engaged German and Austrian subs something like 40 times (although without sinking any).
After the Armistice, selected crews from the Squadron marched in the 1919 victory parades in Paris and London.

To close out Japan’s involvement in the Great War, Nisshin returned home with seven captured German U-boats, (U-46, U-55, U-125, UC-90, UC-99, UB-125, and UB-143) after stops in Malta and other friendly ports along the way from England to Yokosuka, arriving there in June 1919. The former German boats went on to an uninteresting life of their own under the Kyokujitsu-ki, used for testing, salvage exercises and floating jetties. While most of these submarines were low-mileage vessels of little notoriety, U-46 (Hillebrand) and U-55 (Blue Max winner Willy Werner) were very successful during the war, accounting for 116 Allied vessels of some 273,000 tons between them.

Disarmed and largely relegated to training tasks, Nisshin and Kasuga were put on the sidelines after the Great War, replaced by much better ships in the Japanese battle line.

Hulked, Nisshin was eventually disposed of as part of a sinkex in the Inland Sea in 1936, then raised by Shentian Maritime Industry Co., Ltd, patched up and sunk a second time in 1942 during WWII by the new super battleship Yamato, whose 18.1″/45cal Type 94 guns likely made quick work of her.

Her immediate sister, Kasuga, used as a floating barracks at Yokosuka, was sunk by U.S. carrier aircraft in July 1945 then later raised and scrapped after the war. Incidentally, the two Japanese Garibaldis outlasted their Italian sisters, all of which were disposed of by the 1930s. Their everlasting Argentine classmates, however, lingered on until as late as 1954 with the last of their kind, ARA Pueyrredon, ironically being towed to Japan for scrapping that year.

Of note, the British 8″/45s EOCs removed from Nisshin, Kasuga and the other Japanese 1900s armored cruisers in the 1920s and 30s were recycled and used as coastal artillery, including four at Tokyo Bay, four at Tarawa (Betio) and another four at Wake Island once it was captured in 1941. 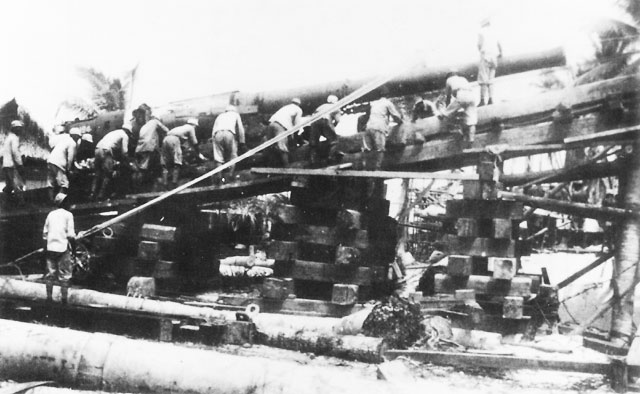 Japanese Special Naval Landing Force troops mount a British-made, Vickers eight-inch naval cannon into its turret on Betio before the battle. This film was developed from a Japanese camera found in the ruins while the battle was still on. Via http://www.ibiblio.org/hyperwar/USMC/USMC-C-Tarawa/index.html

Destruction of one of the four Japanese eight-inch EOC guns on Betio caused by naval gunfire and airstrikes, 1943. Department of Defense photo (USMC) 63618

Nisshin’s name was reused for use on a well-armed seaplane/midget submarine carrier that saw extensive action in WWII during the Guadalcanal campaign, where she was lost.  It has not been reused further.