Warship Wednesday, Sep 18, 2019: The Red-Shirted Scourge of the Ottomans

Warship Wednesday, Sep 18, 2019: The Red-Shirted Scourge of the Ottomans 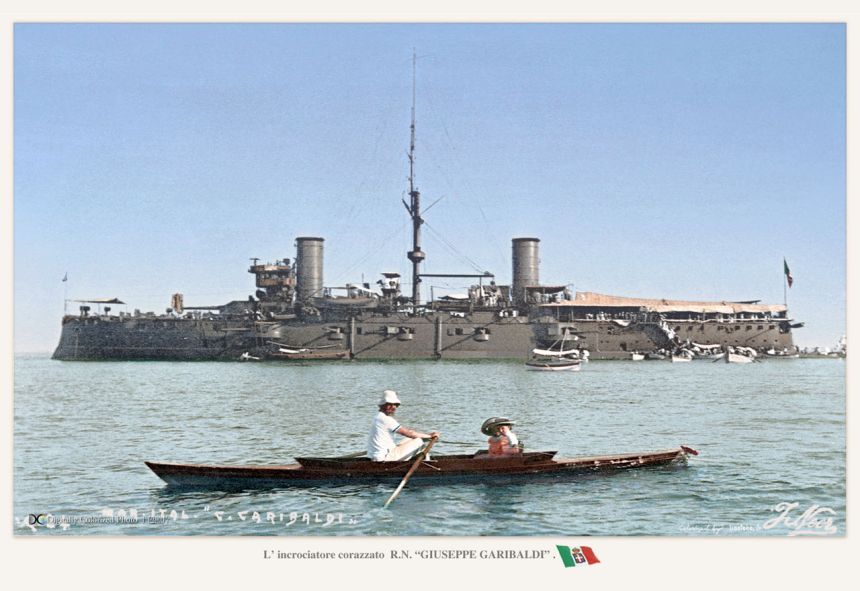 Here we see the Italian Royal Navy (Regia Marina) armored cruiser (incrociatore corazzato), Giuseppe Garibaldi around 1904. She had a curious, if brief career, and could be taken as a bridge between 19th and 20th Century naval warfare, as she tangled with both Civil War-era ironclads and deadly U-boats.

Garibaldi came from a large and interesting class of cruiser designed by Edoardo Masdea, with good speed for the 1900s (19 knots), decent armor (up to 6-inches in sections), and a hybrid armament of one 10-inch gun forward and two 8-inch guns aft, along with a varied mix of casemate guns of all types, a quartet of torpedo tubes, and a ram bow.

They were handsome ships, with orders quickly made within a decade from Argentina, Italy, Spain, and Japan (who picked up two from Argentina’s contract). As a twist of fate, the first delivered was to Argentina, who named their new cruiser, ARA Garibaldi, after the famous Italian red-shirt-wearing patriot. This has the twist that, at the same time in the 1900s, Rome and Buenos Aries both operated sisterships with the same name.

The class-leading Argentine ARA Garibaldi, Photographed by A. Noack of Genoa, probably at Naples or Genoa before her departure for Argentina. Note that the ship does not appear to be flying any flags at all. Description: Catalog #: NH 88672 Colourised by Diego Mar

Further, the first Italian-service Garibaldi was sold before entering the fleet to the Spanish, who were eager for new warships to unsuccessfully defend their overseas Empire from Uncle Sam in 1897, thus making our subject Garibaldi the third such ship of the same class to carry the name.

To help visualize the mess, here is the fortune-cookie-sized-overview of name, country, and chronological order year, with our feature ship *asterisked to keep her straight:

Our vessel was constructed at Gio. Ansaldo & C., Genoa, and commissioned 1 January 1901 and, soon joined by her two twin sisters in Italian service, Varese and Ferruccio, were a common sight in the deep-water ports of the Mediterranean from Alexandria to Gibraltar and back, often serving as division flagships. 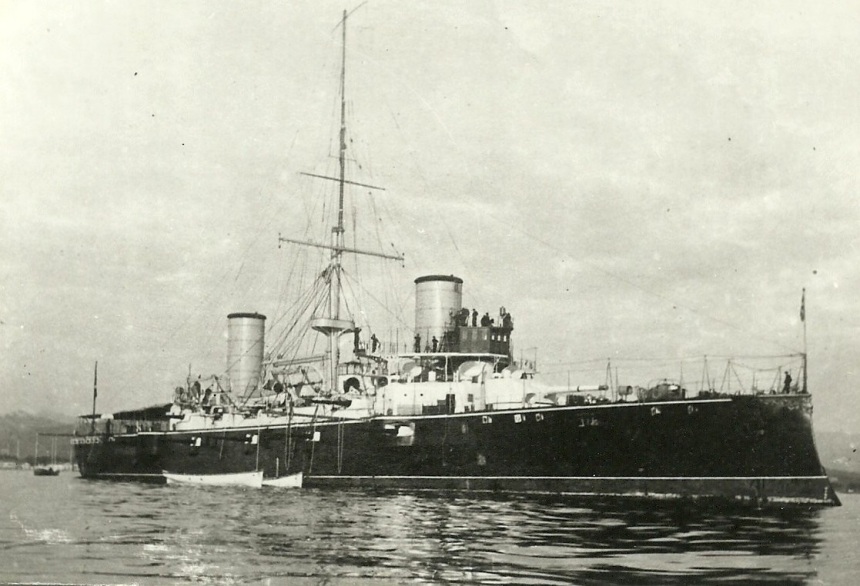 Garibaldi in her original scheme, by late 1901 she carried a more muted grey scheme

It was while carrying the flag of RADM (later Grand Admiral/Naval Minister) Thaon di Revel, that Garibaldi joined in the naval bombardment of Ottoman-held Tripoli just four days into the Italo-Turkish War in October 1911. She sent a company-sized landing force ashore, one of the first modern Italian marine ops, to disable the Turkish big guns at Fort Hamidiye. It was part of a much larger assault, one of the most unsung in amphibious warfare history, and would leave the Italians in control of Libya until 1943.

Italian Navy landing companies landing on the beach of Tripoli, in October 1911 under the guns of Garibaldi and the rest of the fleet. The naval battalions would be followed by a Bersaglieri regiment, and ultimately the Italians would put a corps-sized force of 30,000 ashore that month. Source Garyounis University, ” The Martyr Omar al-Mukhtar Festival: Catalogue of Exhibition”, Arabic-English version, Benghazi, 1979, P.23. via Wiki Commons

Still, under Revel, Garibaldi and her two sisters would go on to give the Turks grief off Tobruk, in Syria, and the Dardanelles, as well as in the Aegean and the Levant. The biggest tangle of these would be in Ottoman-held Beirut. On 24 February 1912, Garibaldi and Ferruccio sailed into the Lebanese harbor and engaged a Turkish torpedo boat Ankara and the old ironclad Avnillah. 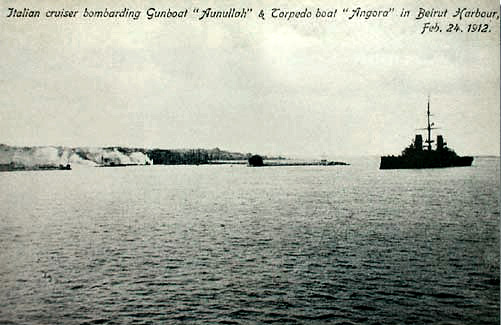 Built in England in 1869, the 2,300-ton central battery gunboat had fought in the Russo-Turkish War some 35 years previously and, while her original black powder muzzleloaders had been replaced with modern German Krupp 5.9-inchers, she still retained her legacy engineering suite which meant that she had been virtually stationary in the harbor for more than a decade.

In the end, it was no contest and Garibaldi started the engagement with her 10- and 8-inch guns at 6,000 yards then moved in to finish off the old ironclad with a brace of Whitehead torpedoes at close range. Avnillah, settled on the harbor floor, ablaze, losing half her crew.

Ferruccio, meanwhile, accounted for Ankara. During the fracas, several civilian craft were also damaged while hundreds of the city’s residents were killed or injured. The Italians suffered no injuries and sailed away to leave the locals to pick up the pieces.

Avnillah’s hulk was still visible inside the harbor mole four years later when the Royal Navy raided Beirut during the Great War.

Beirut, Lebanon. A seaplane of the R.N.A.S. Port Said Squadron obtaining hits with two 60-pound bombs during World War I. The wreck in the harbor is the Turkish Ironclad AVN-I ILAH, sunk on February 24, 1912, by the Italian Cruisers GARIBALDI and VARESE. NH 42779 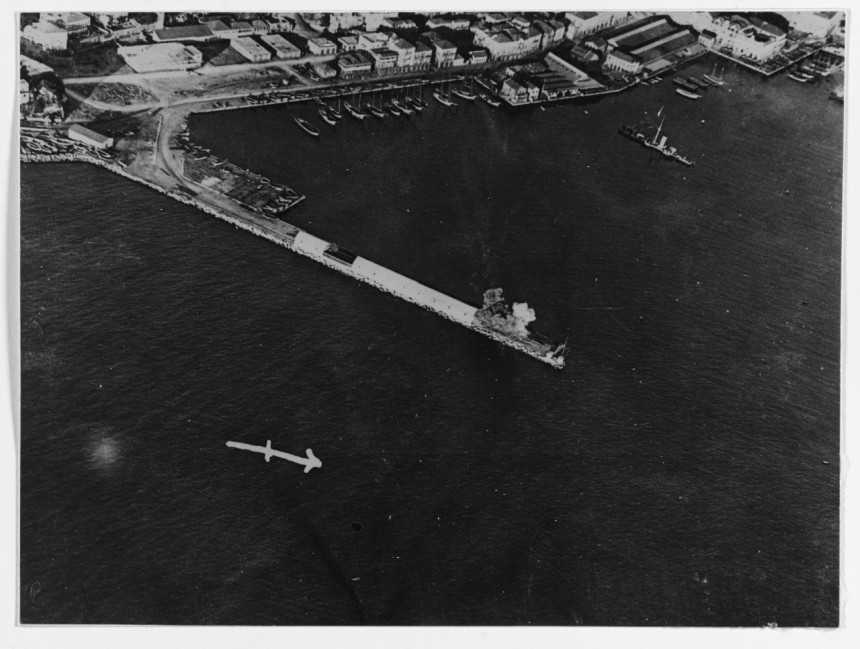 Speaking of WWI, Italy was officially an Austro-German ally on paper as part of the so-called Triple Alliance but entered the conflict tardy and on the other side, which gave both Vienna and Berlin a bit of heartburn. On 23 May 1915, nine months into the war, Italy declared war on Austria-Hungary followed by declarations of war on the Turks that August, Bulgaria in October, and Germany in 1916.

Just three weeks into Italy’s war against the Austrians, on 17 July 1915 a group of warships under the command of RADM Trifari, whose flag flew from Garibaldi, sailed from Brindisi on a mission to interdict the railway line between Sarajevo and Herceg Novi by shelling the railroads at Dubrovnik.

While offshore of the Croatian coast near Molunat, the task force was discovered in the early morning of 18 July by the Germaniawerft-made U-3-class submarine SM U-4, commanded by Linienschiffleutnant Rudolf von Singule of the K.u.K. Kriegsmarine. Singule, who had previously managed to put a fish into the British RN cruiser HMS Dublin without sinking her, was luckier when he pumped a torpedo into Garibaldi and she sank reportedly in minutes, taking 53 of her crew with her.

Her sinking became memorialized in the maritime art of the era. 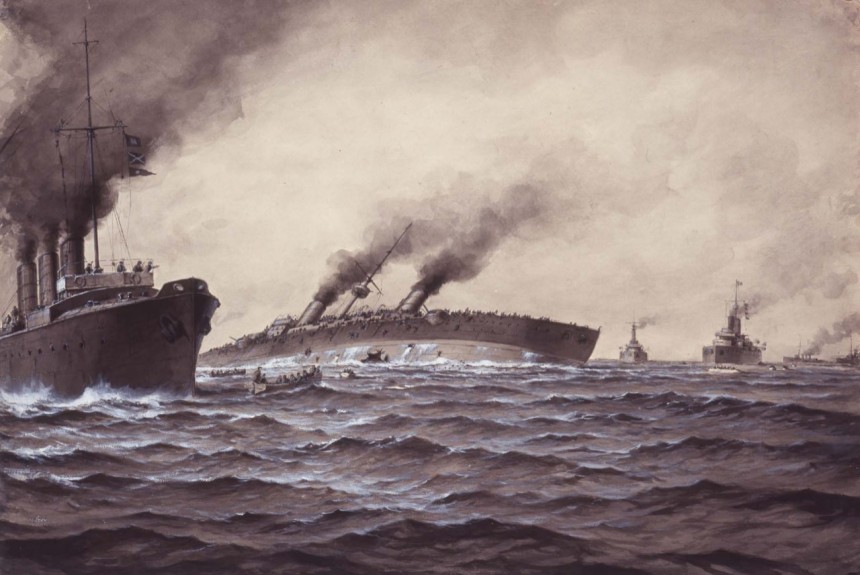 Austrian propaganda painting of her loss, via Wiki Commons

Garibaldi’s flag was saved, as were 90 percent of her crew, and has for generations been a treasured relic of the Italian navy. Today it is held on public display at the Sacrario delle Bandiere del Vittoriano in Rome.

Of Singule, the Austrian who slew the mighty Italian flagship, he chalked up 22,000 tons of shipping while in the K.u.K and was recalled to serve in the German Kriegsmarine in WWII in a training role. He was reportedly “killed attempting to protect a woman from drunken Soviet soldiers on a street in Brünn (Brno, Czech Republic) five days before the German surrender,” in 1945.

Today, Garibaldi is at 122m just off the coast of Croatia, making her an advanced but reachable dive.

As for her 10 sisters, the Spanish Pedro de Aragon was never built while Cristóbal Colón was sunk by the Americans in the Spanish-American War. The Americans likewise sunk the Japanese Kasuga in 1945, which had long been turned into a training hulk, while the IJN Nisshin was expended in the 1930s as a test target. Of the Italian sisters, both survived WWI and served as training ships for naval cadets until they were replaced by the purpose-built sail training ships Amerigo Vespucci and Cristoforo Colombo. The original four Argentine sisters endured in one form or another through the 1930s with ARA Pueyrredón even remaining in the fleet till 1954, at which point she was pushing 60. 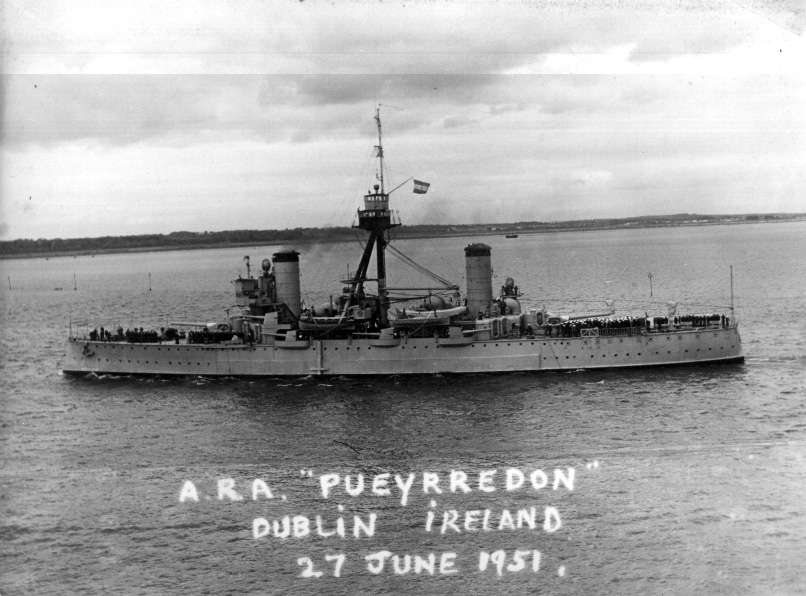 ARA Pueyrredon in Dublin in 1951. At this point, this pre-SpanAm War era vet was pushing her into her sixth decade at sea.

The name “Garibaldi,” naturally, was reissued to the downright lucky WWII-era Duca degli Abruzzi-class light cruiser Garibaldi (551), and, since 1985, to the 14,000-ton harrier carrier Giuseppe Garibaldi (C-551), both of which also served as fleet flagships. 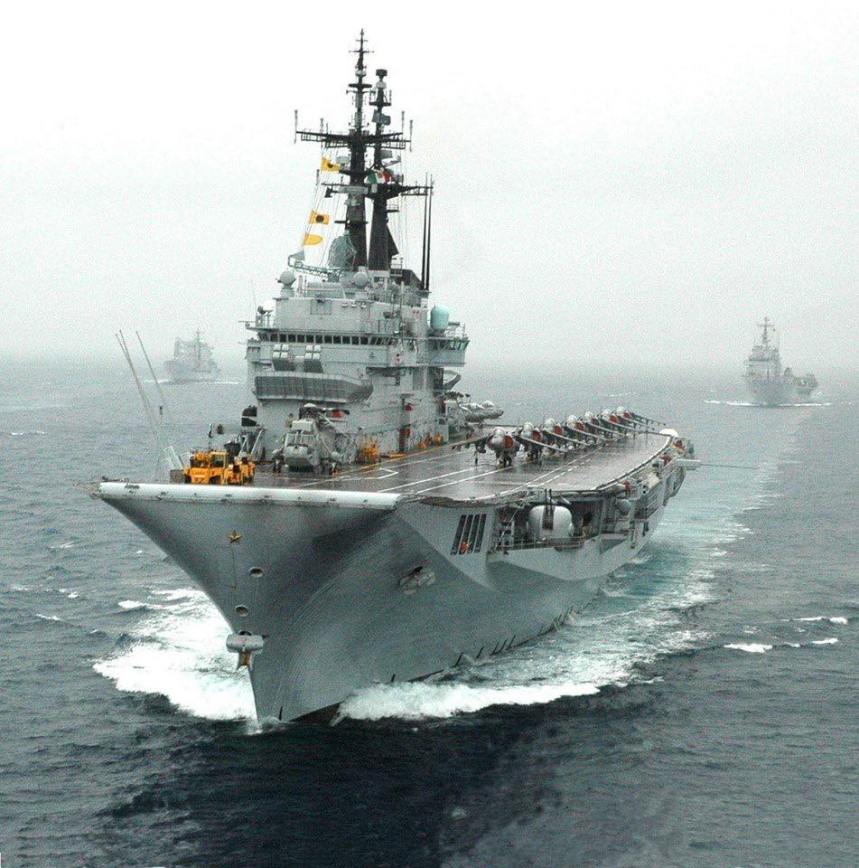