Posted on April 29, 2020 by laststandonzombieisland 3 comments 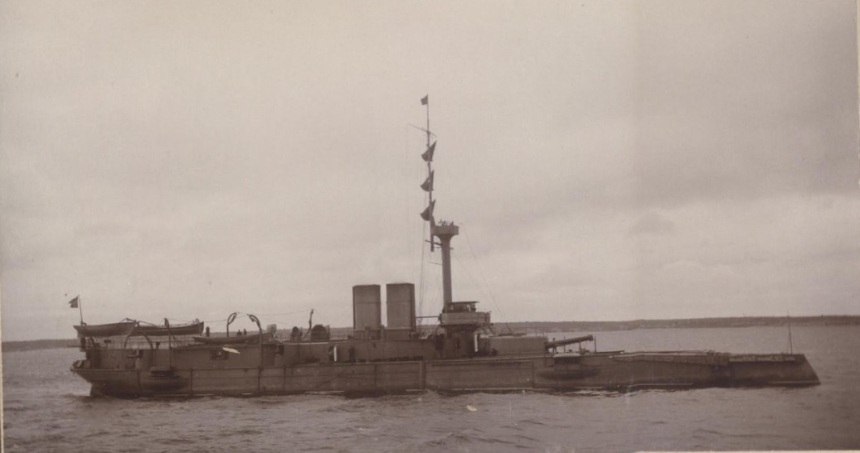 This photo and almost all of the imagery in this post, courtesy of the Swedish Sjöhistoriska museets, with Swedish captions intact.

Here we see the pansarbarten/pansarskepp HMS Svea, the leader of Sweden’s first class of large armored vessels, chilling in Goteborg around 1890. A tough little steel-hulled and sheathed surface combatant, she was a turning point in Stockholm’s naval policy and went on to live a longer life than most of her period contemporaries.

Just after Swedish-born engineer John Ericsson had introduced the ironclad turret warship in 1862 when he lent his genius to the USS Monitor, his homeland soon ordered two classes of iron-hulled coastal monitors to counter Baltic Sea rival, Imperial Russia, as the Tsar was upgrading his own fleet with American-designed monitors. However, by the 1880s, those aforementioned vessels were almost considered quaint by rapidly evolving naval technology.

To reboot their fleet from the first-generation ironclads to steel warships, the Swedes in 1883 placed an order for the 248-foot Svea for 1.24 million krona.

Built of good Swedish Motala Bessemer steel, the 3,050-ton vessel was outfitted with early compound carbon steel armor, her belt running upwards of 11-inches thick down to 2-inches over the deck. Essentially a slow protected cruiser or coastal battleship of about 3,300-tons, she could make 14-knots on her steam plant (she made 16 on trials) and float in 17 feet of water. American military almanacs of the time classified her as a “first-class ironclad” despite her steel coat.

Her main armament was a pair of British-made Elswick/Woolwich 10″/32cal m/1885 guns (as carried by the modernized RN ironclad HMS Thunderer) in a forward turret backed up by a quartet of 5.9-inch Armstrong-produced singles, several smaller Nordenfelt/Palmcrantz anti-torpedo boat guns, and a single 15-inch torpedo tube in her bow, described in naval journals of the time as an “appliance for firing mines.” Speaking of the latter, she also carried a pair of steam launches with spar torpedoes, a common tactic for the 1880s.

Electrically-lit in her interior spaces by 132 16-candle Ericson incandescent lamps, she also carried a battery of searchlights topside powered by a 3-cylinder 140-amp steam-driven dynamo. Her hull was divided into 194 watertight cells below deck, lined with cork. Unlike the monitors, she had higher freeboard and greater seaworthiness. 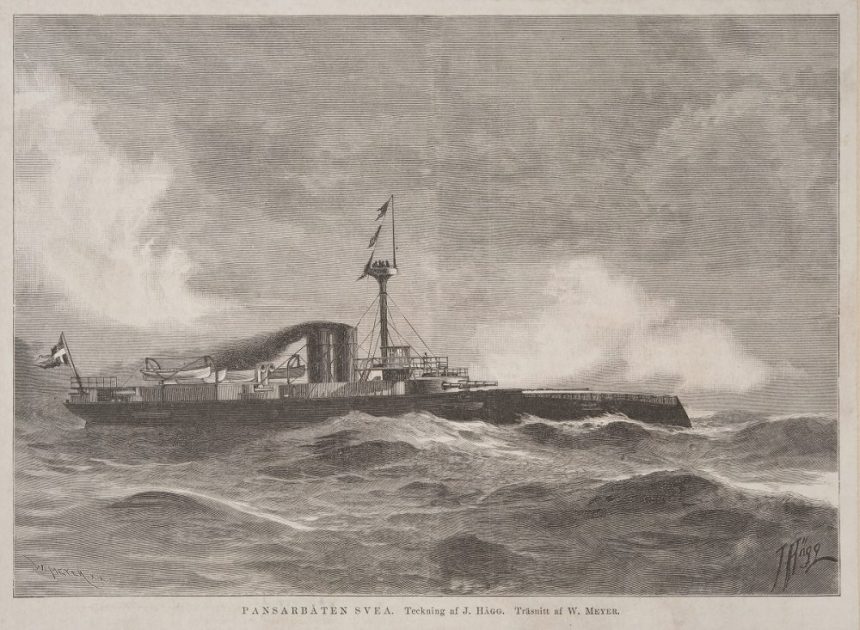 Laid down at the Lindholmen works in Goteborg, Svea was completed on 20 August 1886 and joined the Swedish fleet. She was equal to or superior, for instance, to the American protected cruiser USS Atlanta (3200 tons, 2×8-inch guns, 2-inches armor, 16.3 knots), German Siegfried-class coastal battleships (3500-tons, 3×9.4-inch guns, 9.4-inches armor, 14-knots) and the Russian cruiser Vladimir Monomakh (5500-tons, 4×8-inch guns, 9-inches armor, 15.2-knots), steel warships completed at around the same time as she was.

Notably, Svea was followed by a pair of somewhat half-sisters, HMS Göta and HMS Thule, who had better armor–steel plate provided both by the French firm of Schneider-Creusot and Germany’s Krupp– as well as upgraded m/1889A series 10-inch guns, more numerous torpedo tubes, and more powerful engines as they weighed some 300-tons heavier.

These were the first installment of a series of similar pansarskepp vessels that Sweden would field by the end of 1918 that would see a total of 15 ships across five evolutionary classes, each slightly more improved than the last. The type would prove the backbone of the Baltic country’s fleet for more than 70 years, with the last pansarskepp only removed from the battleline in the 1950s.

Together, Svea and her sisters, which were completed by 1893, were a powerful trio for the Swedish Navy and would remain the strongest units of the Flottan for a decade. The three follow-on Oden-class pansarskepp-type coastal defense ships (3445-tons, 2-10inch guns, 9.5-inches armor, 16.5-knots) which were completed in 1899 were only complementary, not much superior.

By 1900, the Svea-class ships were far from elderly but naval technology had passed them by. But if you think the Swedes were going to toss these low-mileage ships in the scrapyard, you have another thing coming.

Over the next four years, the Svea class were taken out of service and completely rebuilt with new engines and electrical systems and newer armament, which changed their profile. Gone were the 1880s BL 10-inch guns, replaced with a single 8.2″/45 m/98 gun made by Bofors Gallspanz, as used by the new four-ship Äran-class pansarskepps. The old guns were recycled as coastal artillery, installed at the inlet to the big naval base at Karlskrona, where they remained in service until the 1930s. 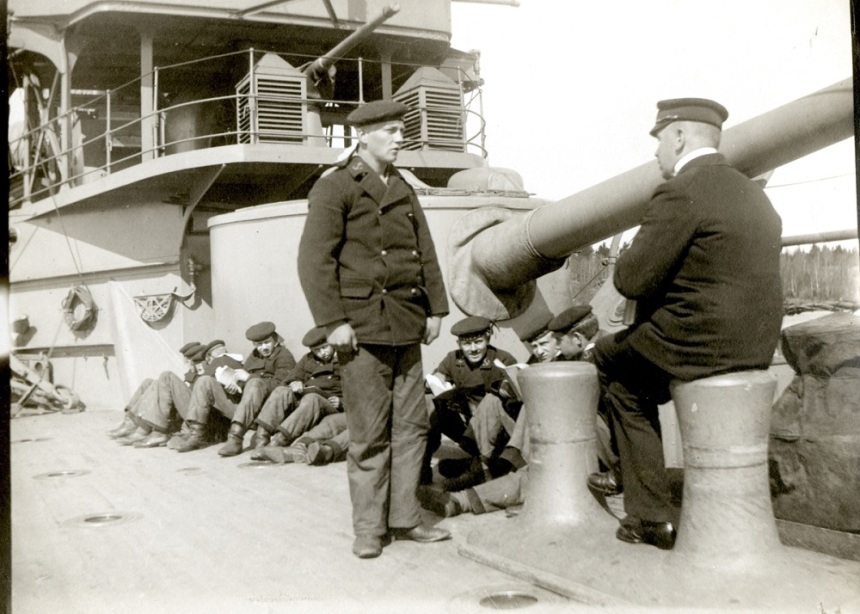 Of note, the reconstruction of the three Sveas cost an estimated £275,000, roughly the price of each individual Aran-class ship, a comparative bargain.

For reference, here is the Svea-class entry from the 1914 edition of Janes where they are listed as “coast service battleships.” 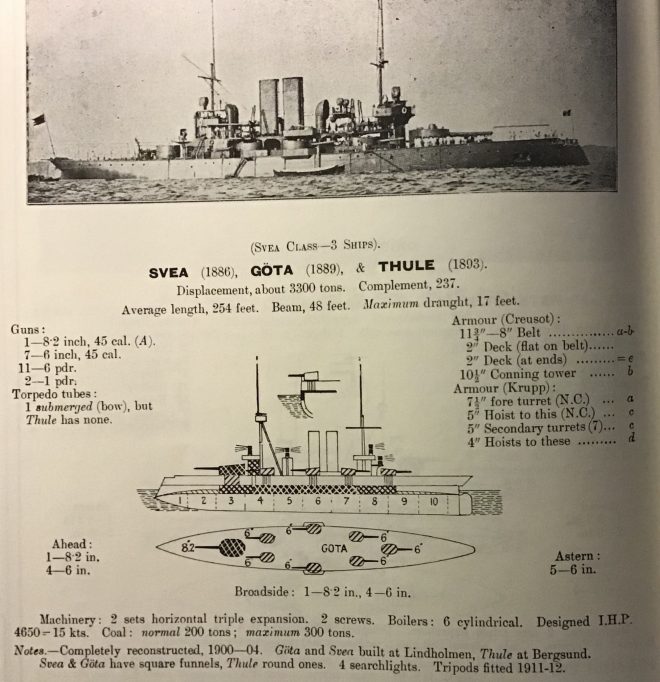 During the same period the Sveas were upgrading, Sweden also rebuilt 11 of their remaining 1860s-era ironclad monitors, rearmed them with more modern 4.7-inch guns, and retained even those dinosaurs through the Great War. 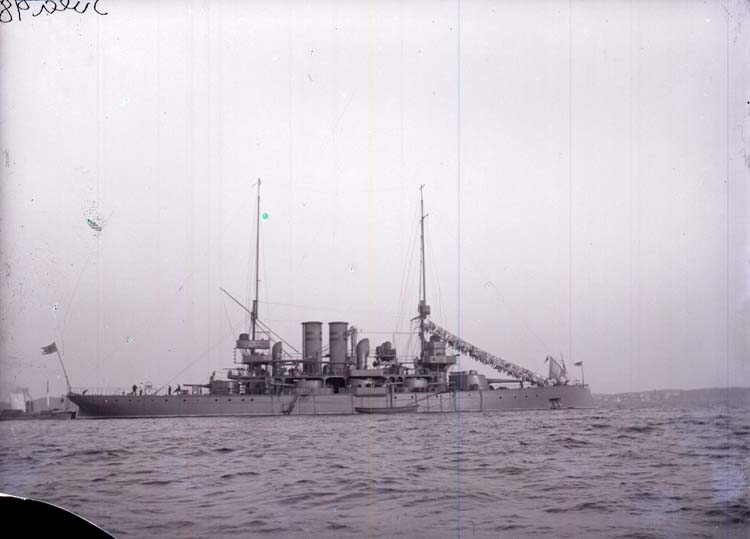 Pansarbåten Svea. Aug. 1911. Note her 8-inch Bofors gun forward and 6-inchers rear and sides. Note she also has a pair of military masts rather than her original single main mast. As noted by Alex M:  the two masts for the 1911 refit are for the Telefunken wireless telegraph system that Sweden adopted for its fleet in 1909-10. More on telecom upgrades a century or more ago: https://bit.ly/2WifWB2. UMFA53278 0540

Speaking of the Great War, with the increase in Sweden’s military spending as a result of the country’s Neutralitesvakten armed neutrality– which saw a series of extensive minefields sown on the Oresund and war dead from Jutland wash up on her shores– the old Svea became a barracks and gunnery training ship in 1915. For this task, her armament was augmented by eleven 57mm guns.

By 1921, with the war in the rearview and the Russians, the country’s perceived greatest threat, left with a dysfunctional fleet in the Baltic for the next decade at least, the surplus Svea was converted for use as a submarine tender, a role she would fill for the next two decades.

This conversion reduced her engineering suite and her armament, which changed her profile again as she went down to a single mast and stack after 1929. As with her previously-removed 10-inch guns in 1900, her 6″/45s went to shoreside emplacements on Stockholm’s Galärvarvskyrkogården Island.

Swedish submarine Valen, torpedo boat Vega, and three Bavern-class submarines alongside the tender Svea. The destroyer Wachmeister is in the distance. NHHC NH 88434

By 1928, both of Svea’s sisterships were taken out of service and hulked, with Thule expended in gunnery tests.

Nonetheless, this still left the Swedes with a dozen relatively younger “bathtub battleships” of which some would be modernized to provide floating muscle for the country’s new navy, which would be centered around modern fast cruisers and hyper-fast Italian-designed torpedo boats. But I digress.

In 1932, Svea’s legacy armament was removed altogether and replaced with two 40mm AAA guns, but she continued to plug on. 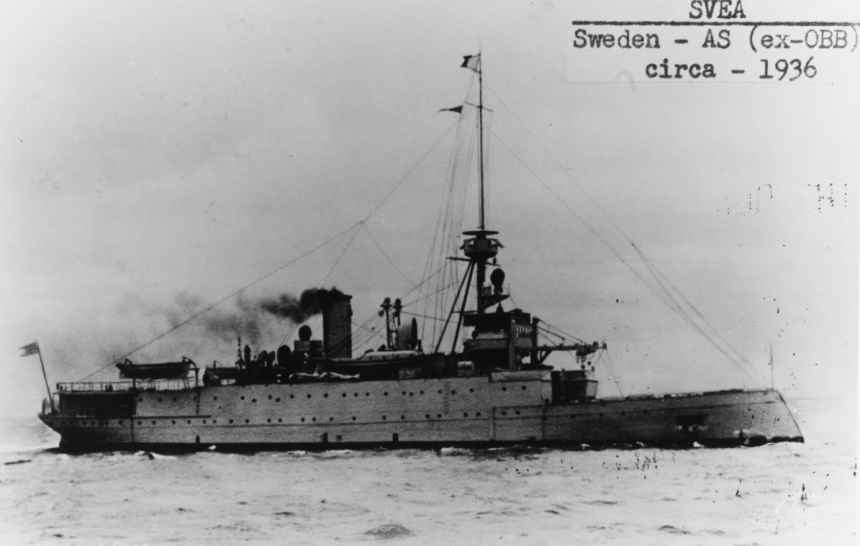 Still serving in the first part of World War II, she was only decommissioned in late 1941 and scrapped in 1944 after further use as a hulk.

Today, numerous relics of Svea still exist in museums across Sweden and she is remembered in period maritime art. 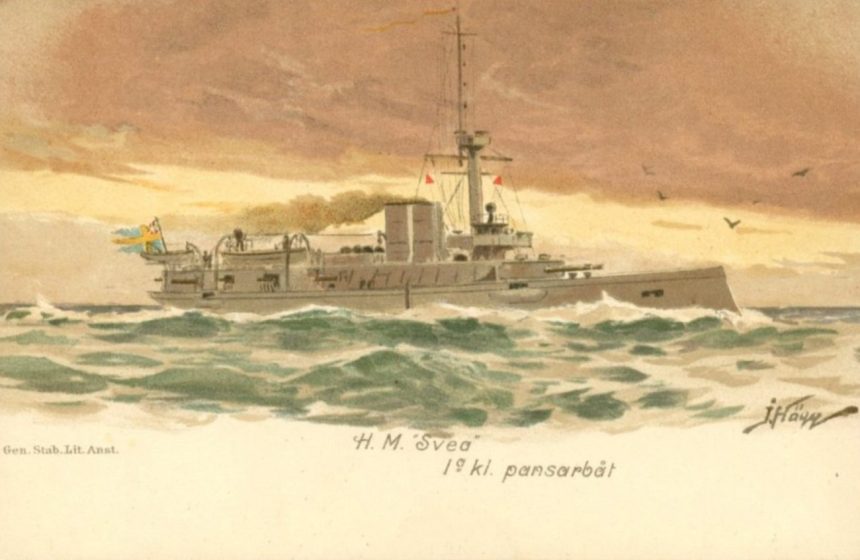 Finally, on Galärvarvskyrkogården, her 1900s-era searchlights and 6-inch guns are well preserved.

It probably helped that they were still used and maintained by the Navy’s coastal artillery branch up until the 1980s.