Walther, originally located in Zella-Mehlis, Germany, was founded in 1886– back when Kaiser Willy was on the throne. After spending the first quarter-century of their existence crafting highly accurate schuetzen competition rifles, Fritz Walther returned to the company from an apprenticeship at DWM, home of the Luger pistol, and, seeing the industry was rapidly moving to produce then-novel semi-auto pistols, urged the older Walther to move in that direction as well.

This led to a flurry of new patents for small, blowback-action semi-autos handguns with fixed barrels and the steady production of little popguns from the Walther Model 1 in 1908 through the Model 9 in 1940. Thus: 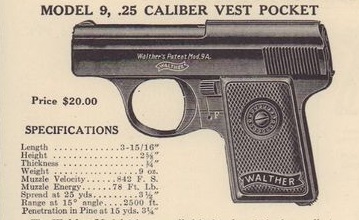 Fast forward to the 1960s and Walther, after losing their Zella-Mehlis factory to the Soviets– who transported it to the East to make Walther PPs, err Makarov PMs– set up a new plant in West Germany. Their first German-made product after the move (as the PP/PPK and P-38 were being cranked out in France) was a throwback to Fritz’s little pocket pistols, or taschen pistole.

Only produced for about a decade, the Walther TP was “retro” even when it was introduced in the 1960s.