Here at LSOZI, we take off every Wednesday for a look at the old steam/diesel navies of the 1833-1946 time period and will profile a different ship each week. These ships have a life, a tale all their own, which sometimes takes them to the strangest places.- Christopher Eger 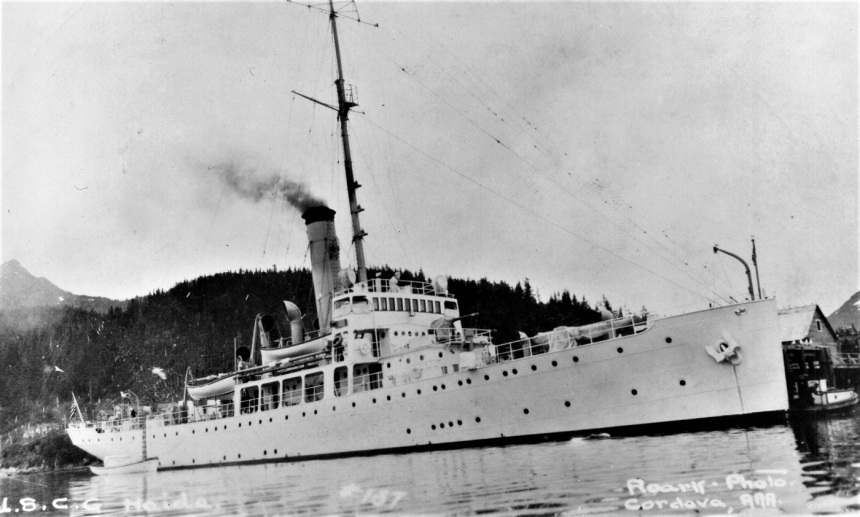 Here we see the Tampa-class U.S. Coast Guard Cutter/Gun Boat Haida (WPG-45) at the dock in Cordova, Alaska Territory likely in the 1930s. Only 240-feet long, Haida had a long and interesting career that, while it only ran along the West Coast north and south from Oakland to Nome, spanned 26 very busy years.

The four Tampas were designed as the USCG’s first true “multi-mission” cutters, vessels that would be able to perform constabulary work in far-flung U.S. territorial waters, run the newly established post-Titanic International Ice Patrol, serve as gunboats for the Navy in time of war, and perform the service’s traditional SAR, derelict destruction, and at-sea towing roles. For their use in time of conflict, each carried a pair of 5″/51-caliber guns with a provision for a third as well as a 3’/50– big medicine for vessels that before the Great War typically ran 6-pounders. Running a novel turbo-electric drive, they could make (up to) 16.2 knots. Some 240-feet long with a plumb bow and counter stern, they weighed 1,506-tons on builder’s trails. 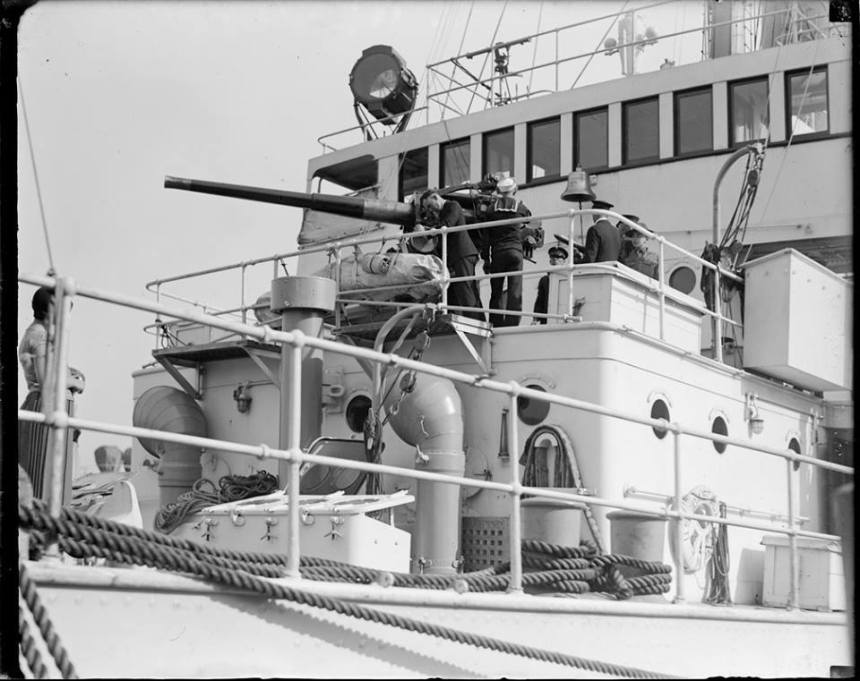 Rush-ordered to take on the fleet of Rum Runners coming down from Canada and up from Mexico during Prohibition, all four of the class– Tampa, Mojave, Modoc, and Haida— were built side-by-side on the West Coast by Oakland’s Union Construction Company. The first keel was laid on 27 September 1920 and the last of the four was commissioned 14 January 1922– the entire class delivered in just under 16 months for $775,000 per hull with the armament provided by the USN from stores at Mare Island Navy Yard.

As noted by the Coast Guard Historian,

“Haida was first stationed at Seattle, Washington, and began a peacetime career on the annual Bering Sea Patrols. She first sailed to Unalaska, the headquarters for the Patrol, and then sailed on her assigned tasks, which included acting as a floating court for the inhabitants of the isolated areas she sailed, caring for the sick, conducting search and rescue activities, checking on aids to navigation, regulating fisheries, and other duties.”

Haida in Unalaska. For her prewar career, she carried USCG-standard scheme including a gleaming white hull and superstructure, buff stack, mast and vents; and black caps with wooden decks. Via NOAA Collection from Van Woert album

A hand-embossed photo of Haida, likely in the 1930s. USCG Historians Collection.

For much of the year, especially before 1939, the random Seattle-based cutters were the only “military” force in Alaska, and on occasion, her skipper was dual-hatted as the United States Commissioner for the Territory.

Which meant parades. Here, an armed a contingent from HAIDA march in the 4th of July parade in downtown Juneau c.1936.

The Haida’s warrant officers photographed on her quarterdeck. The photo is dated 04 August 1926. Note their distinctive Treasury Service swords. Provided courtesy of Ray Sanford in the Coast Guard Historians Collection

It was on this hardy tasking in the frozen north that Haida shined when it came to pulling souls from the peril of the sea. In 1928, she along with the old (1911) 190-foot cutter Ungala and lighthouse tender Cedar, went to the assistance of the grounded Alaska Packers’ windjammer Star of Falkland on remote Akun Island.

“Star of Falkland Rescue by Tom Hall” The Coast Guard cutter Haida and the lighthouse tender Cedar prepare to rescue the passengers and crew from the sailing vessel Star of Falkland near Unimak Pass, Alaska on May 23, 1928. The Star of Falkland, a commercial fishing ship, was returning for the fishing season from its winter port in San Francisco when it ran into high winds and fog and struck stern first on rocks at Akun Head near Unimak Pass. The 280 Chinese cannery workers and 40 crewmen spent a night of terror while the ship pounded on the rocks – eight passengers committed suicide. The next morning, the U. S. Lighthouse Service buoy tender Cedar and the Coast Guard cutter Haida arrived on the scene and managed to take all the passengers off Star of Falkland without loss of life. This rescue is one of the most successful in Coast Guard history, and one of the few instances where the United States Coast Guard and one of its future integrated agencies worked together to perform a major rescue. (USCG Art Collection)

Haida also rescued the crew of the steamship Victoria grounded off Pointer Island, British Columbia on 30 December 1934, the survivors of the Patterson, which went aground and was smashed “to pieces” near Lituya Bay in 1938 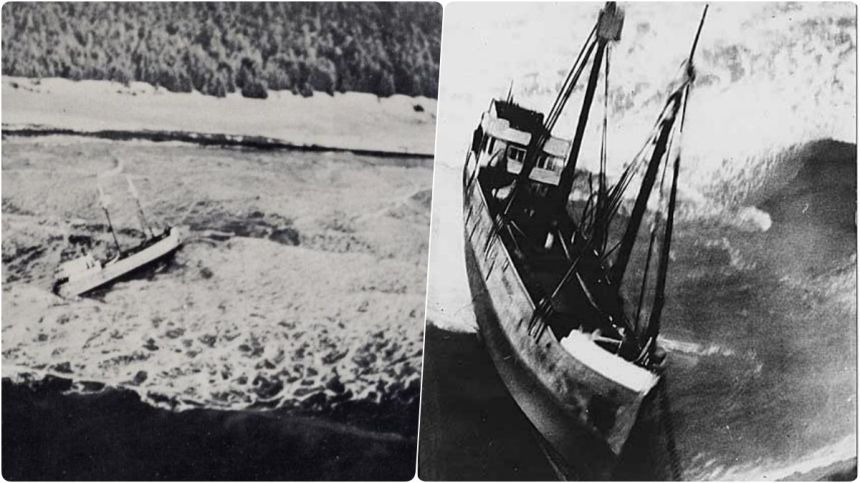 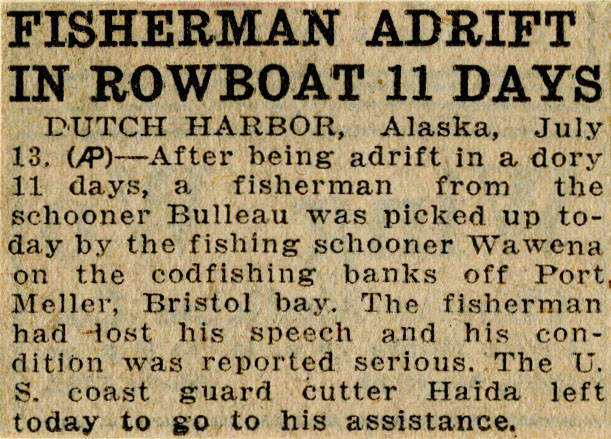 Her crew even trialed some of the first “Gumby” style exposure suits.

Taking a break from saving lives, investigating volcanos, warning the Graf Zeppelin of weather from 1,800 miles away, conducting rowboat crew races in Ketchikan, and otherwise policing Alaska, Haida supported a polar leg of the U.S. Army’s daring Around The World Flight and exercised with the fleet, showing just how “joint” the USCG could be.

Two of the Army’s World Cruisers on the water at Atka, Alaska, on 5 May 1924 with Coast Guard Cutter Haida in the background. The Aleuts of Atka, being unfamiliar with flying apparatus, applied the term “thunder-bird” from their mythology to the Cruisers. National Air and Space Museum, Smithsonian Institution Photo Number: NASM USAF-11533AC

“Haida Back After Long Stay At Sea: Weathers Four Storms And Has Busy Night In Dutch Harbor Gale”

After nearly two months’ absence from Juneau during which she cruised into the shadow of the Arctic Circle and back again for 6,200 miles on the log, the Coast Guard cutter Haida is back at her moorings at the Government Wharl. She sailed from Juneau to Attu, the outermost island in the Aleutian chain. Other points on Haida’s voyage were Seward, Kodiak, Chignik, Unalaska. Chemofski. Atka, Nome, Sabonga, and King island.”

The Haida, during Bering Sea Patrol. took medical aid to many, gave help to two storm-tossed vessels, saved two men from drowning. worked on a third who did not revive, and weathered four severe storms heightened by winds at 80 mph or better. One of the gales blew so hard that the plates of the ship were battered and damaged.”

On Armistice Day in Dutch Harbor, the old Alaska Line vessel Northwestern, now a temporary floating barracks and powerhouse at the navy base, nearly broke away from her moorings as an 80-mph wind lashed the harbor. The Haida crew made the Northwestern safely fast to the dock with a 12-inch hawser. and also secured the Wildlife Service vessel Penguin. On the same night, the cook from the Penguin fell overboard from the Northwestern’s plunging gangplank. A Haida resuscitation crew worked for three hours but were unable to revive him.

At Nome, two of the Alaska Line freighter Sutherland’s crew were pulled from the icy waters of the Bering Sea when they fell overboard, Haida crew making the rescue. At Chignik, ship’s doctor Dr. L.W. Brown saved three of four cases of septic throat, stemming an epidemic, and assisted a woman in childbirth.

Before Pearl Harbor the entry of the U.S. into WWII, the Coast Guard had been assigned to the Neutrality Patrols in the Atlantic (5 Sept 1939), ordered to stand up the Greenland/Iceland adjacent Atlantic Weather Observation Service (Jan 1940), lost 10 of its fairly new Lake-class cutters to the Royal Navy as part of Lend-Lease Program (April 1941), stood up the Greenland Patrol against German weather stations in the Arctic (July 1941) and was officially transferred to the Navy by executive order (1 November 1941).

This saw the 240-foot cutters converted for war with depth charges, additional guns, sonar, and radar. Modoc, Mojave, and Tampa— who had been stationed on the East Coast before the war– were assigned to the Greenland Patrol to chase Germans.

Meanwhile, humble Haida, dubbed Haida Maru by her crew, was tasked to patrol the Pacific Northwest and Alaskan waters, assigned to NOWESTSEAFRON.

CGC Haida in the Bering Sea sometime in 1945. Note her wartime appearance and armament including camo scheme. Photo courtesy of Jack Alberts in the USCG Historian’s Collection.

Haida’s wartime armament was considerable for a tub her size, at the end including four 40mm Bofors mounts for AAA, two depth charge racks, four Y-guns, and two Mousetrap ASW mortars in addition to her 5-inch guns. However, with her weight now pushing almost 2,000-tons, her 20+-year-old GE electric motor did not push her at blistering speeds.

As described in Fern Chandonnet’s Alaska at War, 1941-1945: The Forgotten War Remembered:

On one eastbound escort– remembered by crew member Robert Erwin Johnson– the Haida steamed straight ahead at about 14 knots while the steamship being escorted zigzagged back and forth to avoid overtaking her escort.

Haida prosecuted various possible Japanese submarine contacts, dropping ASW weapons on at least four of them in 1943, at a time when assorted Japanese boats were in fact in that part of the North Pacific, while escorting troopships and freighters to Alaska.

By 1944, she began a regular albeit boring job of manning Weather Station “A” at fortnightly intervals through March 1946, an important facet of trans-oceanic shipping and air traffic.

With the end of the war at hand and the USCG chopped from the deep-pocket FDR-era Navy to the strapped-for-cash post-conflict Treasury Department, all four Tampas were deemed surplus, replaced by a baker’s dozen of newer 255-foot Owasco-class cutters. As such, they were all decommissioned in 1947 and thereafter sold for breaking.

Haida was sold in 1948 and later scrapped in 1951 by the Puget Sound Bridge and Dredging Company, within sight of her traditional Seattle home port. One of her crew, Robert Erwin Johnson, penned a book of his war experience, Bering Sea Escort: Life Aboard a Coast Guard Cutter in World War II.

Her plans and logbooks are in the National Archives, with most of the latter fully digitized. 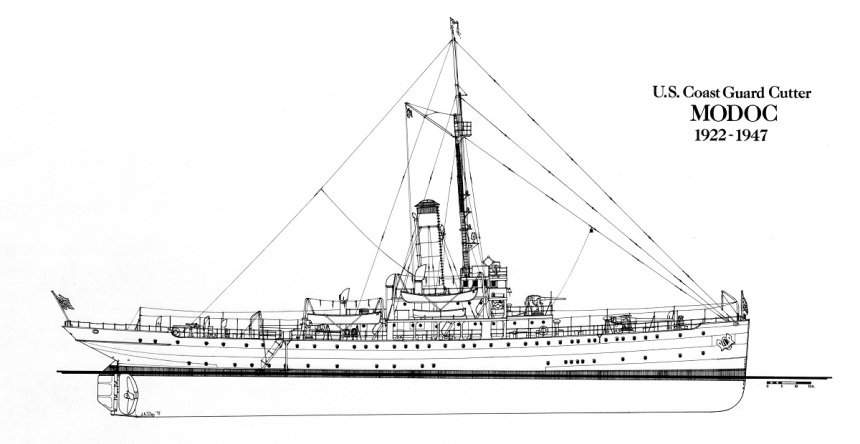