–The 80th anniversary of the founding of the Coast Guard Reserve is this month. Of note, of the 214,000 personnel that served in the USCG during WWII, 92 percent were in the USCGR, with an additional 125,000 personnel serving in the Temporary Reserve.–

Feb 1943. Official caption: Coast Guard Auxiliary. Guardians of inland waters. The Marblehead unit of the Coast Guard Auxiliary includes among its members Bill Welch, a Boston lawyer, junior commander of the flotilla. He contributes twelve hours a week to patrol duty, during which time he assumes regular Coast Guard status as a temporary reservist.

Welch and his flotilla were part of the so-called Hooligan Navy or Corsair Fleet, members of the volunteer Coast Guard Auxillary ordered on 4 May 1942 by Chief of Naval Operations, ADM Ernest J. King to organize into an anti-submarine patrol force officially termed the Coastal Picket Patrol.

Made up primarily of private yachts– the plan was advocated to King by the Cruising Club of America– and fishing boats, crewed by their owners, and converted for ASW use, the small craft of all sizes made regular sorties along the American coast into October 1943. Equipped and outfitted with whatever arms and uniforms the service could spare, these vessels were assigned 15-mile patrol squares extending from the beach to the 50-fathom curve.

In all, a remarkable 2,067 converted private motor and sail craft, numbered CGR1 to CGR9040 served with the patrol, with missing numbers in that range for boats that were surveyed but not taken into service.

Private “Commuter Yacht” Aphrodite built by Purdy Shipyard in May 1937, serving as CGR557 Corsair Navy. Schena notes that CGR557 was 73 feet oal, was assigned to the 3rd Naval District, taken into service April 1942, and disposed of in July 1945, at which point there were only 80 CGR vessels left on the roster. She was reportedly used as a chase and security boat for the Elco PT-boat factory in Bayonne, New Jersey, and tapped from time to time during the war to transport President Roosevelt to and from his home at Hyde Park on the Hudson River. She was originally built for Wall Street financier and later Ambassador to the Court of St. James, John Hay (Jock) Whitney of Manhasset, Long Island.

Coast Guard schooner CGR 2502 of the Corsair Fleet on patrol for German submarines. Note the Coastie on the bow with a Thompson gun. The craft is listed as a 90-foot schooner, formerly the Duchess, that was taken into service in June 1942. She served in the 1st Naval District out of Boston until July 1944. NARA 026-g-014-057-003

Coast Guard schooner CGR 2520 of the Corsair Fleet, with another behind her. This vessel is listed as a 52-foot schooner that was taken into service July 1942, decommissioned in December 1943, and disposed of, likely returned to its previous owner, in July 1944. She served in the 1st Naval District (Maine-Massachusetts) on nearshore/offshore patrol during her wartime service. NARA 026-g-014-059-001

Although actual combat with U-boats was slim for the group, they did provide lots of help in so far as OPSEC was concerned as they often shielded coastwise convoys from random small boat traffic and would board vessels to seal their radios in such instances so that random commo traffic wouldn’t accidentally give away positions to those who were listening for that type of thing.

The nicknames of the force were fitting, as the volunteers, at least in the early days of the patrol, ran the gamut from semi-reformed smugglers and rumrunners to boy scout troops and yachtsmen such as the good Mr. Welch, our trusty lookout in the first image.

Hunter Wood, a skilled maritime artist in the New York City area, joined the Coast Guard in WWII and served as a combat artist. He captured a few of these CGR schooners at work. 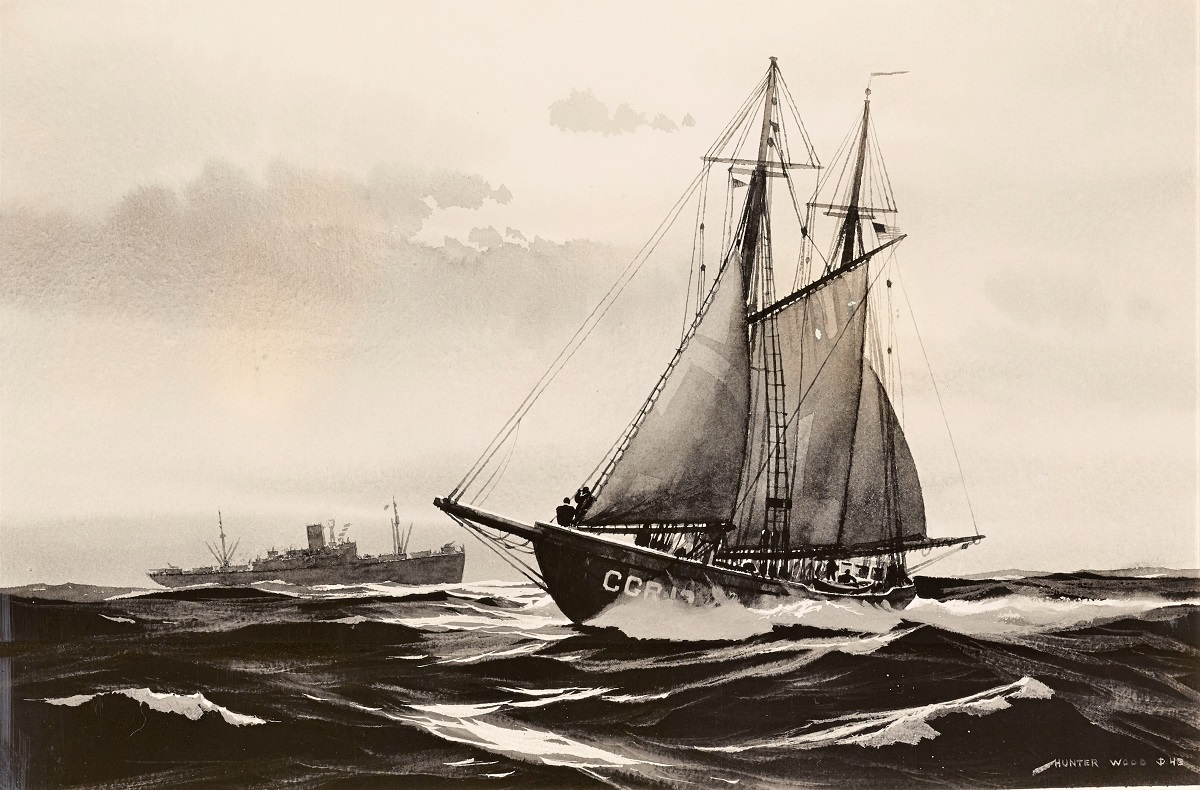 There was even something of an embrace of the term, with Disney pitching in to make an unofficial insignia, that sadly was never issued to the units and men involved.

For a good doc on the Hooligan Navy, A&E– before they were all aliens and mermaids– had an excellent show called Sea Tales and they covered the USCGA in WWII, to include interviews with veterans of the force.

Further, a number of those classic yachts and powerboats are still around. For instance, Aphrodite/CGR-557 is still stately at age 83.

Looks different without the haze grey and machine gun!