Philippines flexing over demands they unreef their ancient LST

We’ve talked in the past about the 2,000-tons of tetanus shots that is the mighty BRP Sierra Madre (L-57), formerly the ex-USS Harnett County LST-821, which has been grounded on Ayungin Shoal (Second Thomas Reef) in the South China Sea since 1999, serving as a forward base for a squad-sized group of PI Marines and a Navy radioman. The move came as a counterstroke to China’s controversial, and likely unlawful, armed occupation of Mischief Reef— barely 200 kilometers from the Philippine island of Palawan– in 1995.

Well, in recent weeks, the Chinese have aggressively prevented resupply and rotation of the guard force on the Sierra Madre, warning off civilian vessels approaching the condemned LST with water cannons.

Finally, on 22 November, two civilian boats, Unaizah May 1 and Unaizah May 3, were able to tie up next to the Sierra Madre and unload, while a Chinese coast guard ship in the vicinity sent a RIB with three persons to closely shadow the effort, taking photos and videos, acts the Philipines described as “a form of intimidation and harassment.” 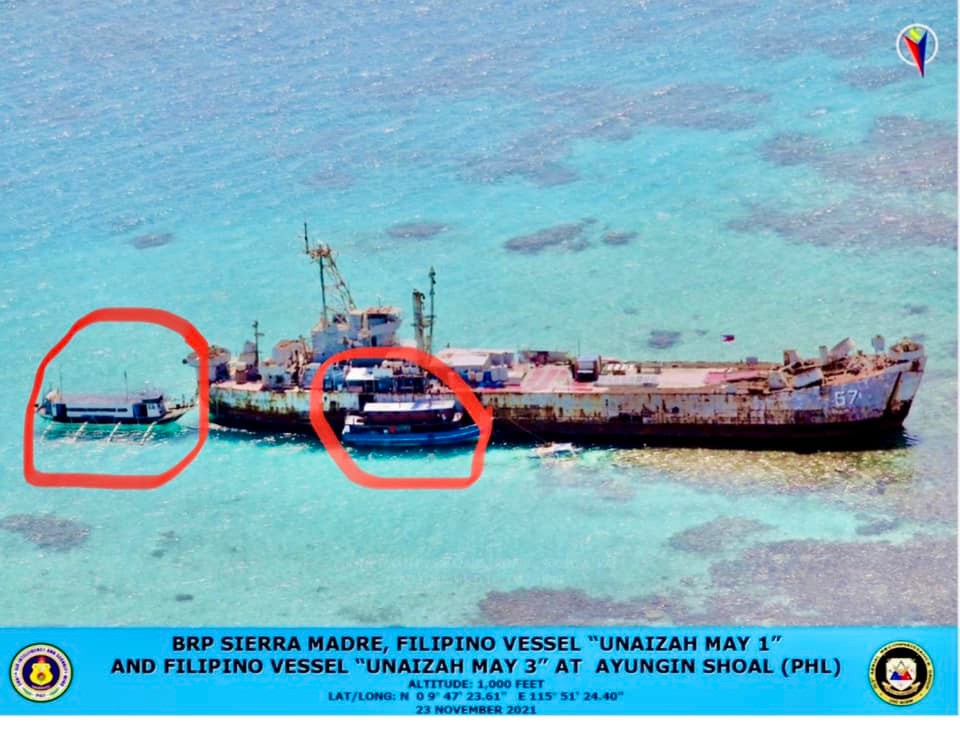 To this, China says Ayungin Shoal is “part of China’s Nansha Qundao (Spratly Islands)” and has told the PI to quit the reef and scrap the rusty outpost.

Ayungin Shoal lies within our EEZ where we have sovereign rights. Our EEZ was awarded to us by the 1982 UNCLOS which China ratified. China should abide by its international obligations that it is part of.

Furthermore, the 2016 Arbitral award ruled that the territorial claim of China has no historic nor legal basis. Ergo, we can do whatever we want there and it is they who are actually trespassing.

With that, Armed Forces of the Philippines (AFP) chief, Lt. Gen. Andres Centino, on Monday said that his leadership would ensure better living conditions of the troops manning the BRP Sierra Madre, refurbishing the vessel in place as a permanent government post.