Posted on April 14, 2022 by laststandonzombieisland 2 comments

Back at the height of the Red Storm Rising days of the Cold War, the Soviet Project 1164 Atlant (Slava-class) guided missile cruisers were scary. At 611-feet overall and 11,500-tons full load, they were bigger than anything the West had with the exception of the one-offs USS Long Beach (CGN-9) and HMS Blake (C99).

After all, with a COGOG suite that allowed for at least 32 knots, powerful (for the Soviets) over-the-horizon sensors, and 16 bus-sized SS-N-12 Sandbox anti-ship missiles– each capable of carrying 2200-pounds of high explosives or a tactical nuke at Mach 3+ to ranges thought to exceed 300nm– they looked a lot like carrier-killers, especially if used in congested waters and/or in conjunction with waves of cruise-missile carrying Backfire/Bear bombers.

It should be no surprise that the ONI made a special effort to capture and disseminate good images of Slava and her sisters, back in the days when HUMINT behind the Iron Curtain often ended up in a basement with a Makarov. 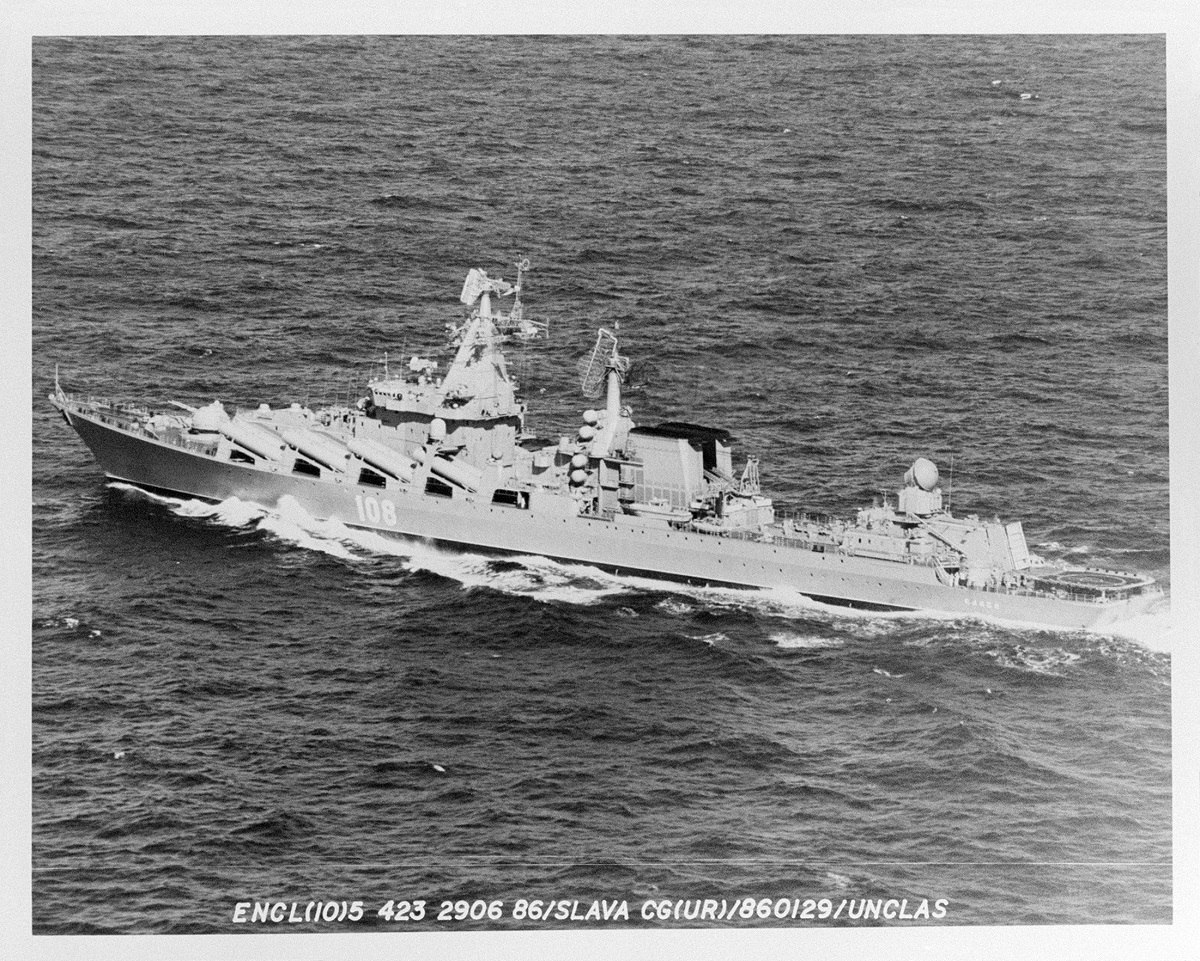 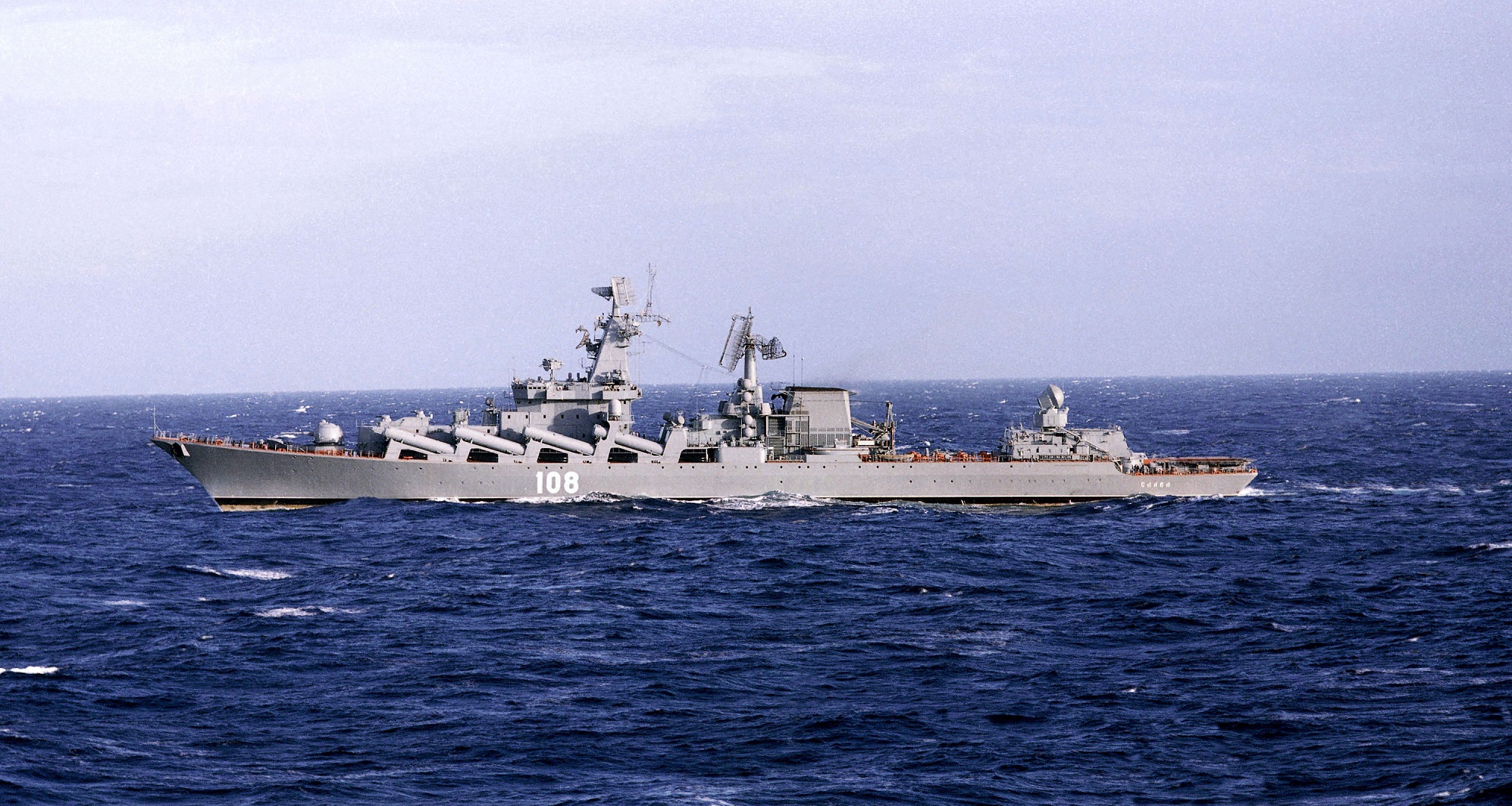 A port beam view of the Soviet guided missile cruiser SLAVA underway 1.28.86. She has carried several hull numbers over the years, with the most recent being 121. DN-SC-86-03642.

While ADM Sergey Gorshkov– Brezhnev’s decoration-girded Mahan, Tirpitz, or Jacky Fisher– planned for at least 10 of these big cruisers, only three were completed by the end of the Cold War. Bigtime prestige ships that signaled the old powerful days of Yakov Smirnoff jokes, the modern Russian Navy kept those three in flagship roles– with Slava (now Moskova) in the Black Sea Fleet, Ustinov in the Northern Fleet, and Varyag in the Pacific Fleet– even if they rarely left port. 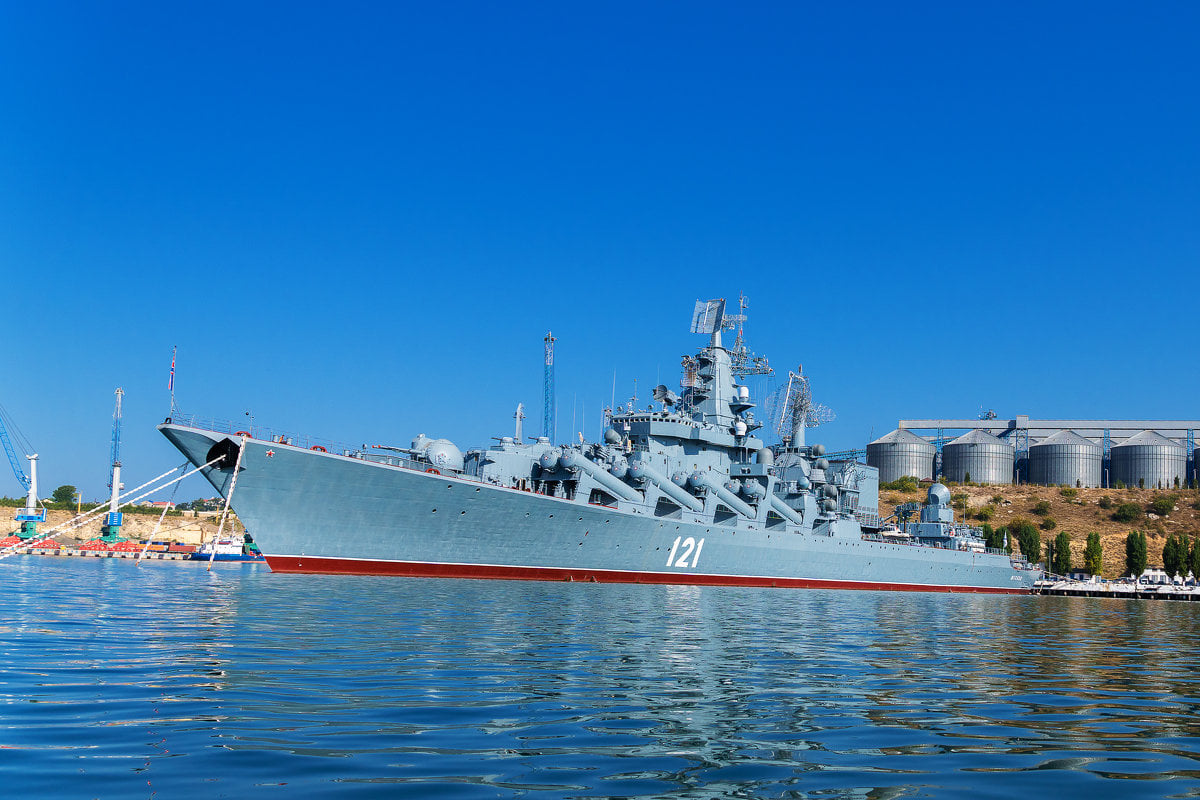 With the Montreux Convention limiting foreign naval assets deploying into the Black Sea and Turkey, Ukraine, Romania, and Bulgaria having nothing comparable, Slava/Moskova has been the most powerful warship afloat in those ancient waters for some time.

She gained prominence in the Snake Island (“F You, Russian Warship”) incident last month (yes, I know those guys didn’t die) and the Ukrainians even issued– this week, a stamp to commemorate it, showing a sole Border Guard with an AK standing off with Slava/Moskova.

All of which leads us up to the news that Moskova has reportedly been hit by two Ukrainian RK-360MC Neptune shore-launched anti-ship missiles yesterday as the ship’s very formidable air defenses were being diverted by a low-flying TB-2 drone or two.

Able to operate well inland from the coastline with OTH targeting cues, the domestically produced AShM is a rough equivalent of Harpoon based on the Soviet Kh-35 (SS-N-25 Switchblade) anti-ship missile with a smaller warhead and longer range.

There seems to be some fire to the proverbial smoke on this, and the Russian Defense Ministry had issued a statement, repeated on state media, that a fire had caused munitions to explode and the crew had been fully evacuated.

This jives with reports that the big Russian cruiser was broadcasting SOS messages in morse and over voice channels in the clear.

01.00 Ministry of Internal Affairs of the Russian Federation announced the fire and the following explosion of ammunition on the Moskova. The department is talking about the fire on the cruiser. The causes of the fire are being established.

01.05 from Moskova, an SOS signal was sent
01.14 as a result of fire and explosion, Moskova began evacuation and listed to port.
01.47 On Moskova, the power has completely disappeared. Everything is bad.
02.07 In Turkey, they claim that 99.99 percent within an hour Moskova may sink (54 sailors from the cruiser were saved by a Turkish ship. )

02.48 In Turkey and Romania, new outlets say that the cruiser Moskova has sank.

Likewise, the Montreux Convention means Russia cannot replace any losses of ships in the Black Sea Fleet with other Russian Navy vessels.

If Moskova has in fact been sunk, it would be the largest warship since ARA General Belgrano (C-4)/ex-USS Phoenix (CL-46), was sent to the bottom almost exactly 40 years ago in the Falklands, dispatched by a trio of three WWII-era unguided Mk 8 mod 4 torpedoes from HMS Conqueror (S48).

It would also be the first Russian cruiser sunk since the Admiral Nakhimov-class light cruiser Chervona Ukraina was sunk in November 1941 by German aircraft (Ju 87, Stuka’s from II./StG.77) at Sevastopol. 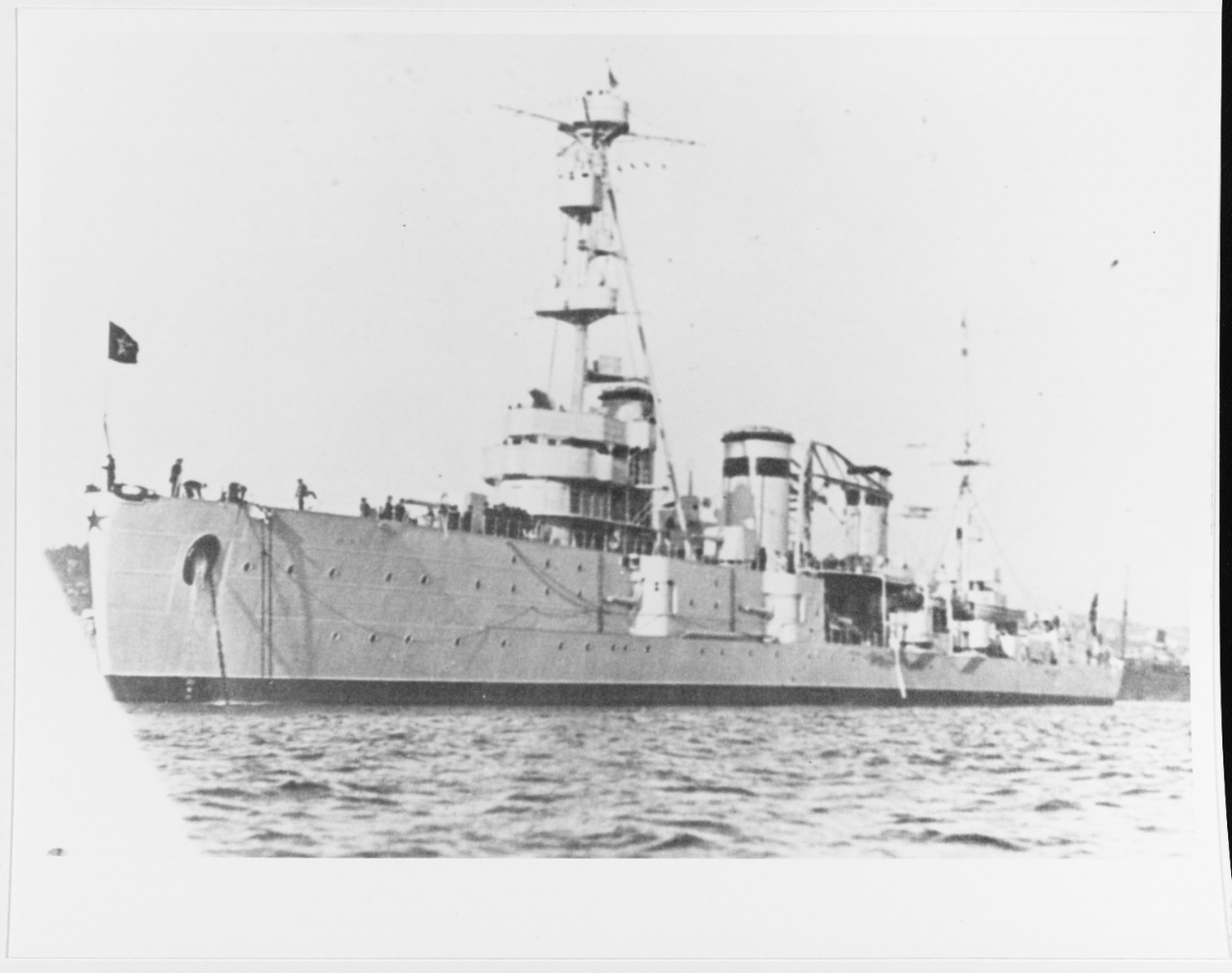 As an interesting sidenote, Chervona Ukraina was laid down at Nikolayev on the Black Sea as Nakhimov under the Tsar and was renamed Bogdan Khmelnitsky while on the ways by the Skoropadskyi Ukrainian breakaway government in 1919, making her kinda-sorta a Ukrainian cruiser for a minute.

Nonetheless, increasingly, it appears the Russians have feet of clay.