From the spark that was Nikolai Tesla wowing the crowds of New York’s Madison Square Garden with his four-foot long, steel-hulled, radio-controlled boat (patented in 1898) and his follow-on “dirigible wireless torpedo,” we are now going on 125 years of unmanned surface and subsurface vehicles, with an easy bent towards using them in warfare. 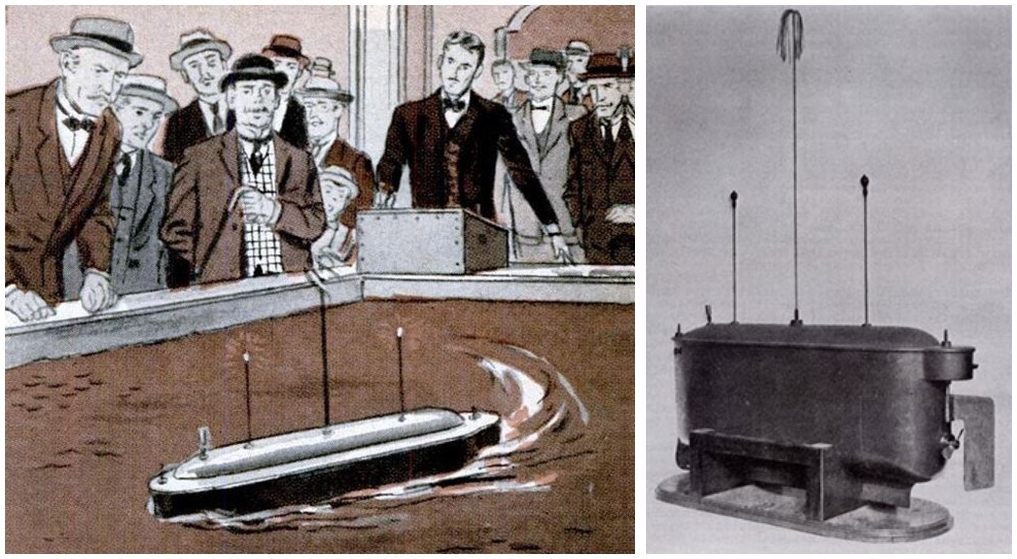 With stops at the German Fernlenkboot (FL) of the Great War and the Italian Motoscafo da Turismo (MTS) unmanned explosive motorboats of WWII, today’s maritime lingering/loitering USV munition has been well proven in the Black Sea.

Following up on the dramatic attack late last month on the Russian 4,000-ton Admiral Grigorovich-class frigate Admiral Makarov and smaller Natya-class minesweeper Ivan Golubets by Ukrainian USVs more information on these “killer kayaks” have surfaced including an excellent photo essay that has popped up on Reddit of no less than a half-dozen of these little black boats under construction and testing, including design details and the mix of commercial-off-the-shelf components and local supplies (Rotax 3-cylinder engines from a Canadian Sea Doo jet ski– which only run about $2-3K each— a Starlink receiver, old Warsaw Pact-era contact exploders, et. al). 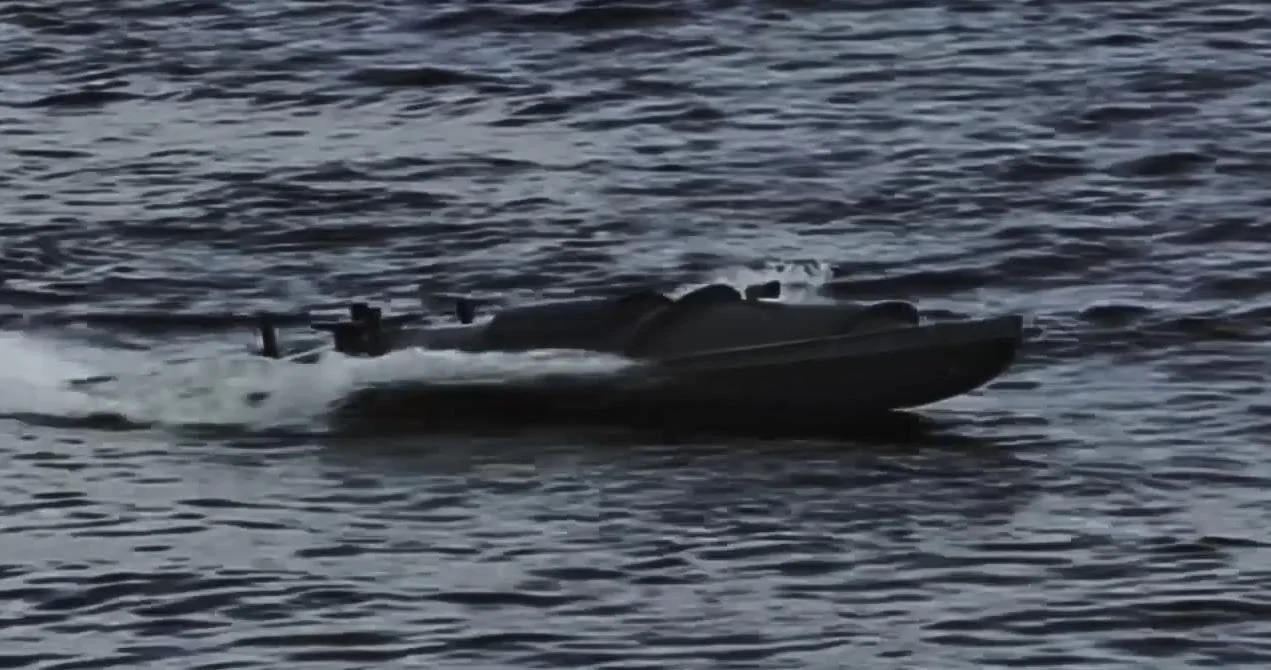 Like Tesla’s boat, they are low-lying and relatively deep of hull for stability 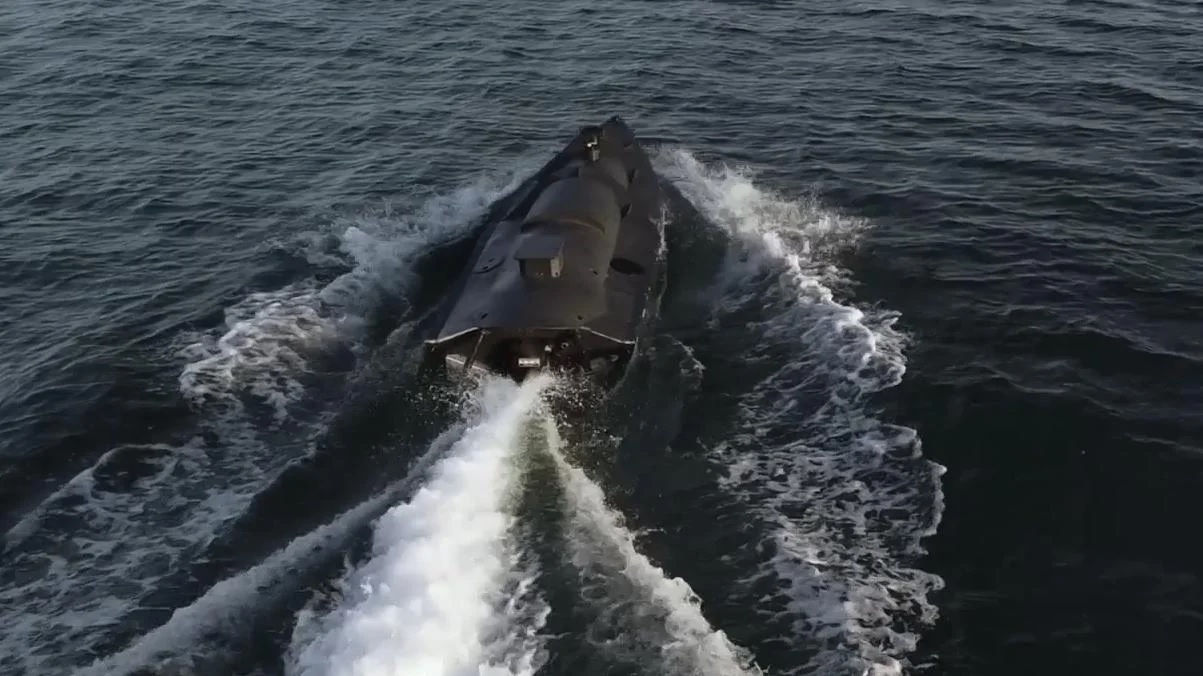 Note they appear to be arranged on portable launching cradles that can be reused.

H.I. Sutton over at Covert Shores, who has been covering these boats since the beginning, has compiled this rough specs list for these crafts which reportedly cost a bargain of just $250K each (as opposed to an MK-48 Mod6 torpedo which runs $10m in its current format):

Odds are, Tesla can feel the connection.

Although the Russians by far outstripped Ukraine’s naval forces (which were mostly coast guard in nature) at the outset of the war in February, the smaller country has proved an underdog with a lot of bites when it comes to littoral operations. Besides sinking the 14 April 2022 sinking of the cruiser Moskva and a handful of other incidents, the Ukrainians keep slugging away.

Russia’s current Black Sea flagship vessel, the relatively newly commissioned 4,000-ton Admiral Grigorovich-class frigate Admiral Makarov, was damaged and possibly disabled during an audacious Ukrainian drone attack on Sevastopol over the weekend. The attack included a swarm of aerial drones coupled with a flotilla of small water-borne USVs. TASS reported that all the air drones had been destroyed, but it nonetheless seems Makarov is badly hurt and possibly two or three other ships damaged as well with the Russians confirming at least some problems with the Natya-class minesweeper Ivan Golubets.

The attack videos, widely available, look like something out of a Bond movie.

HI Sutton has been chronicling the Ukrainian explosive USVs over at Covert Shores for the past few months. They first popped up back in September when Russian naval forces in Sevastopol found one aground there.

While the propaganda victory to Kiev/Ky’iv is great, the Russians soon retaliated by canceling the ongoing grain shipping program from Ukraine ports to hungry third-world countries, which is kind of a bummer for places like Ethiopia and Sudan.

With that, Russia has admitted to the largest warship sunk in combat since 1982 (ARA Belgrano/ex-USS Pheonix) and its first cruiser lost since 1941 (Chervona Ukraina/ex-Bogdan Khmelnitsky/ex-Admiral Nakhimov).

Moskova is also the largest warship lost (reportedly) to an anti-ship missile in combat, surpassing the Royal Navy’s well-documented loss of the 4,800-ton Type 42 destroyer HMS Sheffield (D80), which, like Moskova, foundered under tow after a missile attack left her a burnt-out hulk. 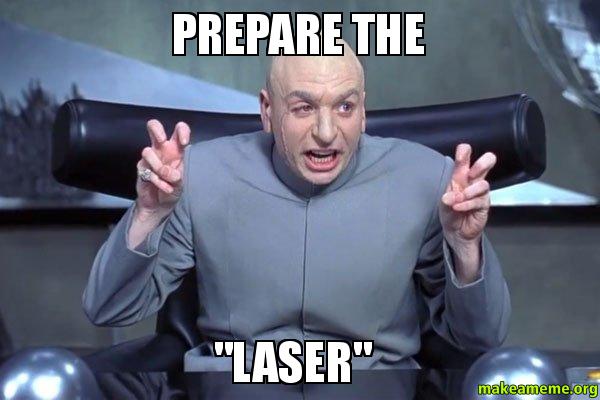 Speaking of anti-ship missile news, the U.S. Navy’s Office of Naval Research announced on the same day Moskova was hit by the Ukrainians, that it had conducted (in February) a “Historic Test of New Laser Weapon System.”

And it splashed a drone “representing a subsonic cruise missile in flight.”

Sure, just about every dangerous wave skipper out there is super (or hyper) sonic these days, but don’t get lost in the sauce that this was a shootdown by an all-electric, high-energy laser weapon, which could be the way of the near future.

“It’s a challenging problem, but Navy leadership at all levels see the potential for laser weapons to really make a difference,” Dr. Frank Peterkin, ONR’s directed energy portfolio manager, said. “The next few years are going to be very exciting as we work with the Navy and joint partners to make the capability we just saw demonstrated by the LLD a reality for the naval warfighter.”

Posted on April 14, 2022 by laststandonzombieisland 2 comments

Back at the height of the Red Storm Rising days of the Cold War, the Soviet Project 1164 Atlant (Slava-class) guided missile cruisers were scary. At 611-feet overall and 11,500-tons full load, they were bigger than anything the West had with the exception of the one-offs USS Long Beach (CGN-9) and HMS Blake (C99).

After all, with a COGOG suite that allowed for at least 32 knots, powerful (for the Soviets) over-the-horizon sensors, and 16 bus-sized SS-N-12 Sandbox anti-ship missiles– each capable of carrying 2200-pounds of high explosives or a tactical nuke at Mach 3+ to ranges thought to exceed 300nm– they looked a lot like carrier-killers, especially if used in congested waters and/or in conjunction with waves of cruise-missile carrying Backfire/Bear bombers.

It should be no surprise that the ONI made a special effort to capture and disseminate good images of Slava and her sisters, back in the days when HUMINT behind the Iron Curtain often ended up in a basement with a Makarov.

A port beam view of the Soviet guided missile cruiser SLAVA underway 1.28.86. She has carried several hull numbers over the years, with the most recent being 121. DN-SC-86-03642.

While ADM Sergey Gorshkov– Brezhnev’s decoration-girded Mahan, Tirpitz, or Jacky Fisher– planned for at least 10 of these big cruisers, only three were completed by the end of the Cold War. Bigtime prestige ships that signaled the old powerful days of Yakov Smirnoff jokes, the modern Russian Navy kept those three in flagship roles– with Slava (now Moskova) in the Black Sea Fleet, Ustinov in the Northern Fleet, and Varyag in the Pacific Fleet– even if they rarely left port.

With the Montreux Convention limiting foreign naval assets deploying into the Black Sea and Turkey, Ukraine, Romania, and Bulgaria having nothing comparable, Slava/Moskova has been the most powerful warship afloat in those ancient waters for some time.

She gained prominence in the Snake Island (“F You, Russian Warship”) incident last month (yes, I know those guys didn’t die) and the Ukrainians even issued– this week, a stamp to commemorate it, showing a sole Border Guard with an AK standing off with Slava/Moskova. 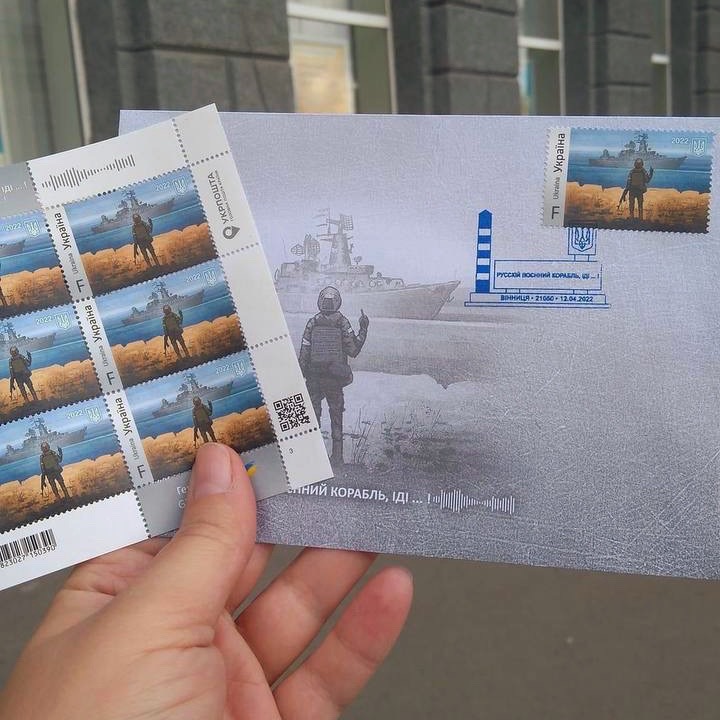 All of which leads us up to the news that Moskova has reportedly been hit by two Ukrainian RK-360MC Neptune shore-launched anti-ship missiles yesterday as the ship’s very formidable air defenses were being diverted by a low-flying TB-2 drone or two.

Able to operate well inland from the coastline with OTH targeting cues, the domestically produced AShM is a rough equivalent of Harpoon based on the Soviet Kh-35 (SS-N-25 Switchblade) anti-ship missile with a smaller warhead and longer range. 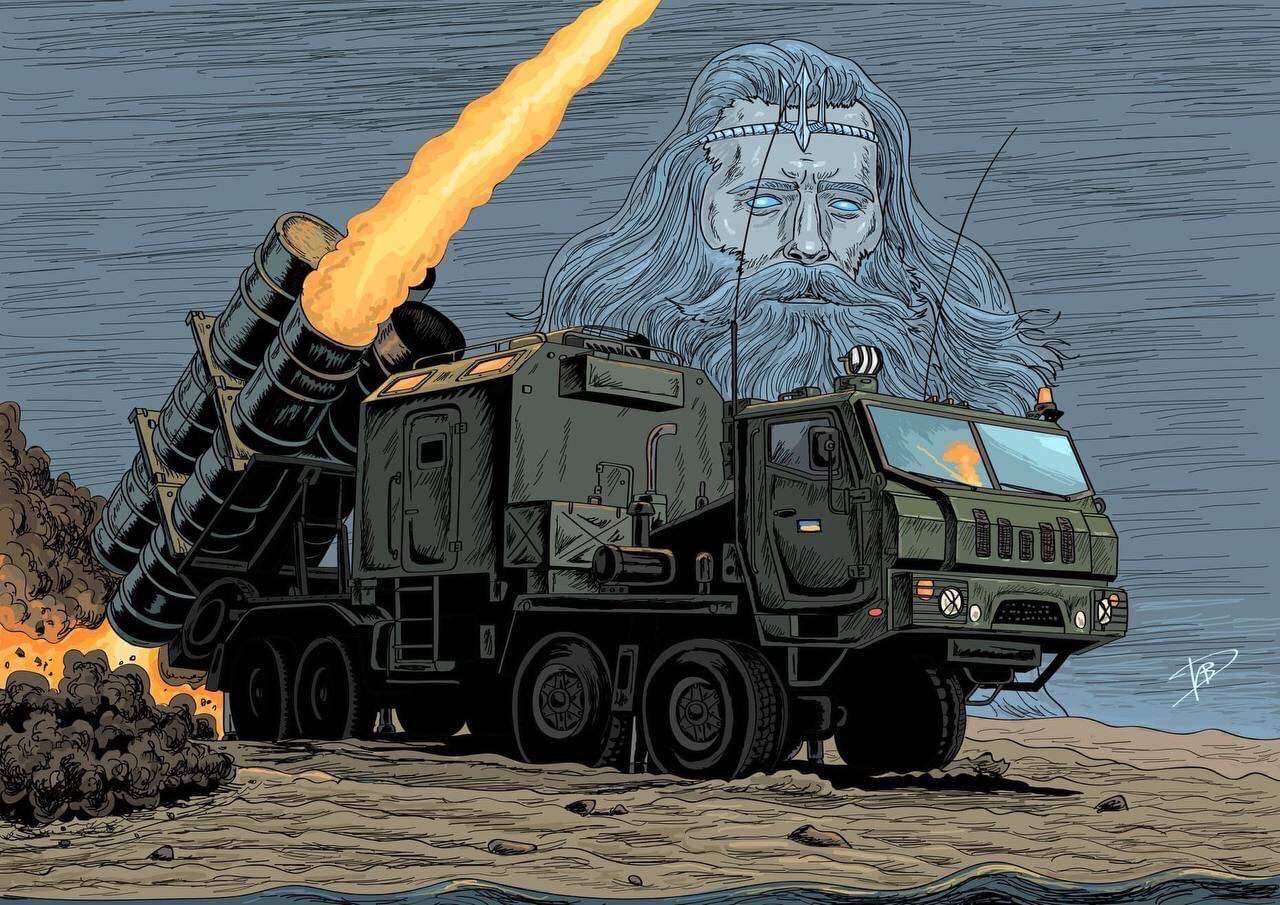 There seems to be some fire to the proverbial smoke on this, and the Russian Defense Ministry had issued a statement, repeated on state media, that a fire had caused munitions to explode and the crew had been fully evacuated.

This jives with reports that the big Russian cruiser was broadcasting SOS messages in morse and over voice channels in the clear.

01.00 Ministry of Internal Affairs of the Russian Federation announced the fire and the following explosion of ammunition on the Moskova. The department is talking about the fire on the cruiser. The causes of the fire are being established.

01.05 from Moskova, an SOS signal was sent
01.14 as a result of fire and explosion, Moskova began evacuation and listed to port.
01.47 On Moskova, the power has completely disappeared. Everything is bad.
02.07 In Turkey, they claim that 99.99 percent within an hour Moskova may sink (54 sailors from the cruiser were saved by a Turkish ship. )

02.48 In Turkey and Romania, new outlets say that the cruiser Moskova has sank.

Likewise, the Montreux Convention means Russia cannot replace any losses of ships in the Black Sea Fleet with other Russian Navy vessels.

If Moskova has in fact been sunk, it would be the largest warship since ARA General Belgrano (C-4)/ex-USS Phoenix (CL-46), was sent to the bottom almost exactly 40 years ago in the Falklands, dispatched by a trio of three WWII-era unguided Mk 8 mod 4 torpedoes from HMS Conqueror (S48).

It would also be the first Russian cruiser sunk since the Admiral Nakhimov-class light cruiser Chervona Ukraina was sunk in November 1941 by German aircraft (Ju 87, Stuka’s from II./StG.77) at Sevastopol.

As an interesting sidenote, Chervona Ukraina was laid down at Nikolayev on the Black Sea as Nakhimov under the Tsar and was renamed Bogdan Khmelnitsky while on the ways by the Skoropadskyi Ukrainian breakaway government in 1919, making her kinda-sorta a Ukrainian cruiser for a minute.

Nonetheless, increasingly, it appears the Russians have feet of clay.