Some 80 years ago today, on 6 August 1942, the Royal Canadian Navy’s C-class destroyer leader HMCS Assiniboine (I18) turned herself into a knife to slice up a German sausage in the form of a U-boat

Ordered in 1929 for the Royal Navy as HMS Kempenfelt, she joined the British fleet in 1932 and served until the outbreak of World War II, when shortly after Hitler sent his legions over the Polish border, the 1,400-ton tin can moved over to the Canadians and was given her Assiniboine moniker (just “Bones” to her crew) and was soon busting German blockade runners in the Caribbean. Allocated for mid-ocean escort service in June 1941, she would ride shotgun on a staggering 71 convoys.

This brings us to Kptlt. Rudolf Lemcke’s U-210, a Krupp-built Type VIIC operating with the Steinbrinck wolfpack some 20-days into her first war patrol.

From the excellent Post Mortems On Enemy Submarines – Serial No. 4 in the NHHC collection:

At 1325 on August 6, in a patch of clear weather, H. M. C. S. Assiniboine, forming part of the escort of S. C. 94 from Halifax to the United Kingdom, sighted a conning tower bearing 30° range 6 miles. At 1338 she fired three salvos, before the last of which the U-boat altered course to port and dived. It has been positively established by survivors’ statements that this boat was not U-210. Assiniboine arrived in the vicinity of this U-boat’s diving position at 1357 and altered course to 330°, this being the estimated course of the U-boat before she dived. Assiniboine then carried out a box sweep in the area, at 1418 firing a pattern of depth charges set at 100 to 225 feet, but with no evident results, and continued to sweep in the presumed track of this U-boat.

At 1912 Assiniboine sighted a conning tower bearing 120° at 2,000 yards retiring at full speed into the fog. At 2036, with visibility about 2,000 yards, she established a Radar contact bearing 270°. Almost immediately she sighted U-210, stopped. Then U-210 went ahead at full speed and altered course to starboard, disappearing into the fog after Assiniboine had fired one round. Assiniboine, hearing H. E. at this time bearing 300°, increased speed, but misjudged the distance she had run and, thinking she had passed the U-boat’s position, altered to 345°, the target’s estimated course. She then realized her mistake, and altered course back to 190°. Visibility was then 600 to 800 yards.

At 2000 the bridge watch was relieved aboard U-210, the following men coming on duty: Quartermaster Holst, Coxswain Krumm, Monbach, and Meetz. Mueller relieved Mycke at the helm. Mueller is believed to have stood alone in the conning tower at this time. As none of the bridge watch survived the following action, accounts of the sinking of U-210 are limited to his statements and those of men below decks.

According to Mueller, fog closed around the U-boat as the watch was relieved and Lemcke, thinking that U-210 was safely hidden, came below to eat his supper. A few minutes later Mueller heard confused sounds of shouting and firing above, and Lemcke and Tamm passed him on the way to the bridge. General alarm was sounded throughout the U-boat, by buzzers in the forward compartments and by flickering green and red lights in the engine room, as the crew were eating their evening meal. 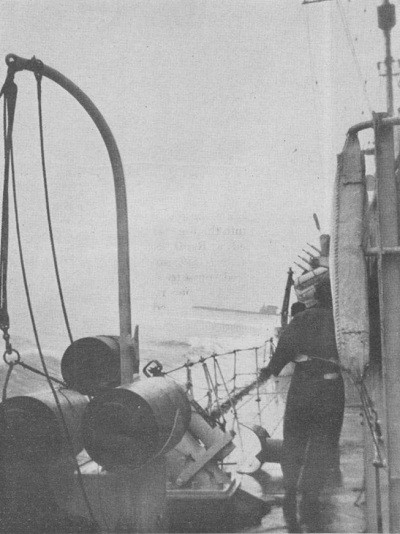 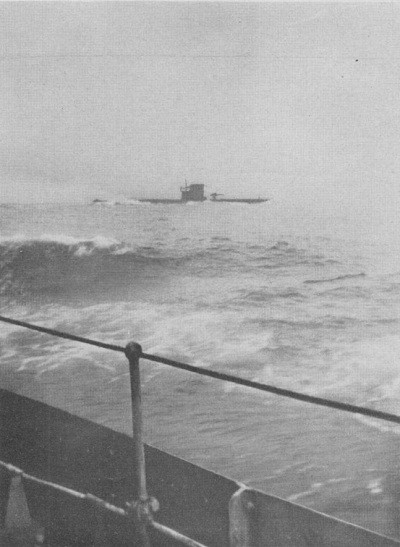 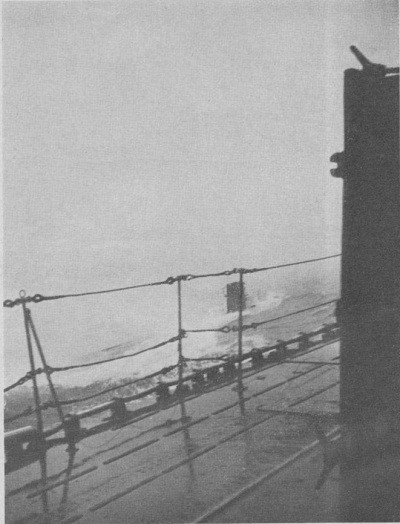 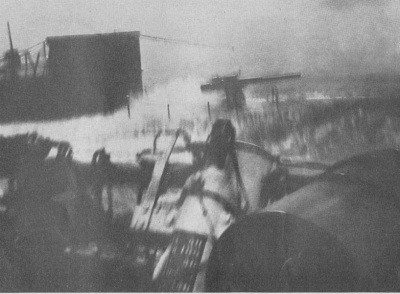 At 2050 Assiniboine gained another Radar contact at 035° on the starboard bow, range 1,200 yards. She closed it at full speed and about 1 minute later sighted U-210, still on the surface. She closed to ram at full speed, having first housed the dome and prepared a 50-foot depth-charge pattern.

Both vessels opened fire and for about 25 minutes a furious action ensued at almost point-blank range. U-210 took a constant evading action, and Assiniboine was forced to go full astern on the inside engine to prevent U-210 getting inside her turning circle, which the U-boat seemed to be trying to do. During some of this action the two vessels were so close that Assiniboine‘s company could see Lemcke on U-210‘s bridge bending down to pass wheel orders.

Aboard U-210 no effort was made to dive immediately nor could anyone reach the 8.8-cm. gun, but fire from Assiniboine was returned by Holst, manning the 2-cm. gun at a range of approximately 200 yards. Explosive bullets were used and started a second-degree fire in Assiniboine‘s forecastle, spreading aft almost to the bridge.

Lemcke was blamed posthumously by his men for not submerging at once, but the volume of smoke pouring from the destroyer apparently led him to believe that he had damaged her considerably, and encouraged him to prolong the action. Prisoners also stated that he felt he could escape on the surface through the protecting fog, if need be.

Assiniboine‘s first hits damaged one of U-210‘s port trimming tanks. The bridge was then struck by machine gun bullets. Holst was shot through the neck and killed outright, and Krumm was badly wounded. An instant later Assiniboine scored a direct hit with her 4.7 gun on the conning tower, the shell making a shambles of the bridge.

A prisoner stated that Lemcke was literally blown to pieces, and that Krumm, lying wounded, was virtually decapitated. It is assumed that Tamm also suffered a violent death.

Mueller believed that a body was flung against the torpedo firing mechanism, releasing an unset torpedo. Between them prisoners counted three more direct hits: One through the forward torpedo tubes, another which carried away the deck covering between the 8.8-cm. gun and the forward torpedo hatch – neither causing leaks in the pressure hull – and one aft which smashed the screws, water entering the boat. The boat was down by the stern, the electric motors had caught fire, and the round hitting the conning tower had severely damaged the Diesel air-intake.

During the action an attempt was also made to fire one torpedo.

The tube’s crew was told to stand by, but the order was never given.

With the conning tower practically demolished, Sorber, the engineer officer, now attempted to dive U-210. As the boat submerged, she

was rammed to starboard by Assiniboine abaft the conning tower and over the galley hatch (Kombüsenluke). U-210 descended to a depth of 18 meters. Water was flooding into the boat through the damaged Diesel air-intake, and through the battered stern. The electric motors had failed and everything breakable within the boat had been shattered.

Sorber gave the order to blow tanks and abandon ship, under the misapprehension that Göhlich, who had received superficial cuts, was too badly injured to make the ultimate decision. Sorber later reproached himself for surfacing and surrendering as he believed, upon subsequent reflection, that he might have been able to escape submerged. On surfacing, it was found that the water in the air-intake prevented the Diesels from being started and, according to survivors, U-210 remained stopped and slightly down by the stern. Assiniboine rammed again aft as U-210 surfaced, firing a shallow pattern of depth charges as she passed. The C. O. of the destroyer stated that the U-boat then sank by the head in 2 minutes.

Mueller stated that he stayed at his post until he heard the order. “Blow tanks; stand by life jackets!” He then left the helm as his life jacket was in the forward torpedo compartment and the men had been told never to take any but their own. He clambered through to the bow compartment, where he found a number of men abandoning ship through the forward torpedo hatch. Water was flooding through the hatch as he followed them. The majority of the engine-room personnel thought they were trapped when they found, first, that the galley hatch was jammed, and then, that they could not move the conning tower hatch which had become jammed by the direct hit on the bridge. Through their combined exertions they finally got the conning tower hatch open. The last man out of the control room stated that water was well over his boots there as he left.

When all were mustered, the engineer officer and one of the control room petty officers apparently went below, opened flooding valve 5 and put an explosive charge in the periscope shaft. There is a special opening in the shaft inside the boat for this purpose. The radio men threw overboard a number of secret papers, or burned them with incendiary leaflets. They also smashed the radio equipment with a hammer. Sorber himself denied that he had done anything more than open the seacocks before leaving the boat, as the last man out.

U-210 sank at 2114, H. M. S. Dianthus appearing out of the fog in time to see her go under. Although at the time of her sinking her after aerial was out of action and her Morse key broken, the chief radioman said he was able to send a signal reporting her sinking. Although this signal was much under power, he was sure that if B. d. U. did not receive it, one of the other U-boats in the vicinity did.

One survivor said that the radioman told them afterward that he had not been able to send any signals.

In view of the tremendous punishment taken by U-210 it is remarkable that the entire crew below decks escaped with their lives.

Four years later a new St-Laurent class destroyer (234) would perpetuate her name in the RCN, carrying it until 1995.

The battle between Bones and U-210 is remembered in maritime art.