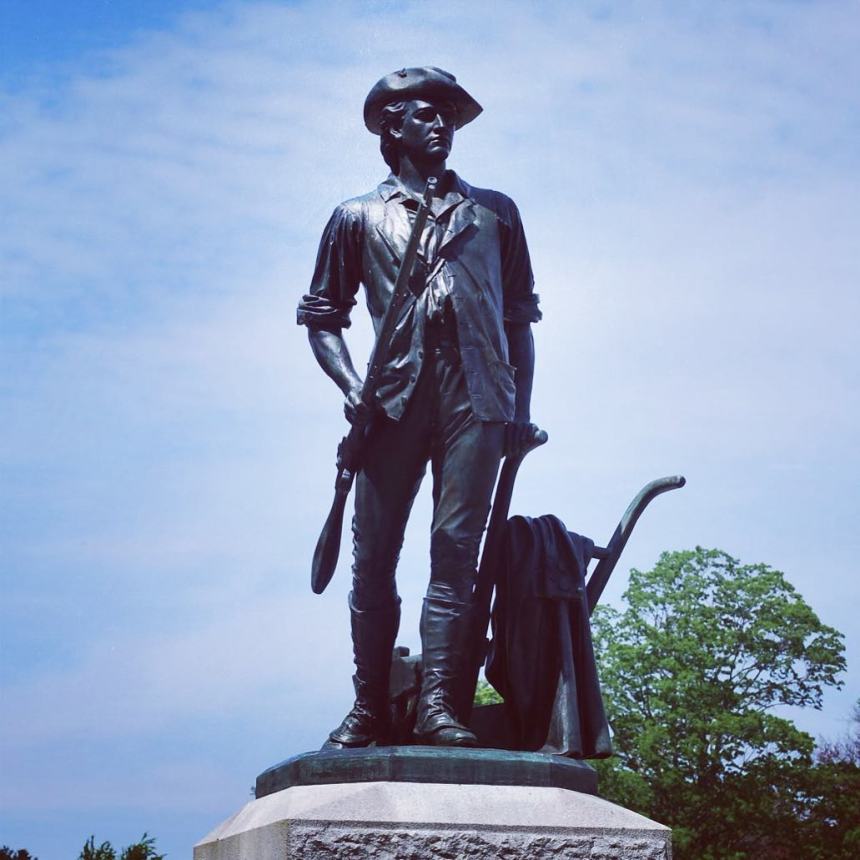 While you may know of today’s standard U.S. Army infantry rifles, and those of the 20th Century, how about those present at Lexington and Concord or the line of Springfield muskets from 1795 through 1865? What came after?

For all this and more, check out the easy 2,000-word primer I did for this last weekend at Guns.com.

Rock Island Auction’s upcoming December Premiere Firearms event, which is this upcoming weekend, has a bunch of really nice goodies– especally if you are a M1903 rares collector.

Among the nicest I’ve seen is this great Griffin & Howe “exhibition quality” National Match Springfield. From hand-stippling on receiver ring to rich engraving on the barrel bands, floor plate, trigger guard, and rear sight base, this rifle is a showcase piece before you mention the jeweling on the bolt and hand-checkered English walnut stock.

Even the companion 1911-dated M1905 bayonet has gotten attention.

Then there is this late WWI model (1918-marked barrel) Springfield Armory Model 1903 rifle comes complete with a very hard to find Cameron-Yaggi device, one of several “trench periscope” setups tested for use in that horrible “War to end all wars.” 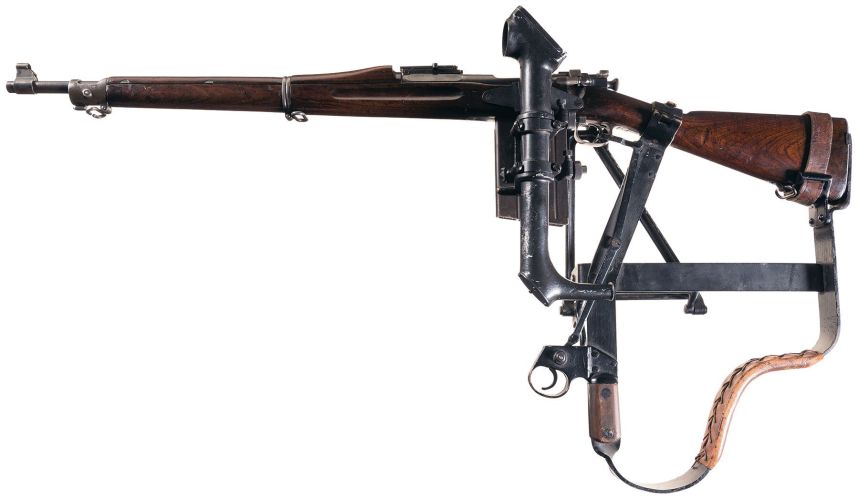 This particular rifle comes from Bruce Canfield’s own collection (he literally wrote most of the noteworthy books on U.S. military small arms currently in circulation) and was featured in a number of books itself. Every time I talk to Mr. Canfield I come away enlightened.

More on the exhibition gun in my column at Guns.com here and the Yaggi here.

Also, if you have about two hours to kill, check out Mae and Othais from C&Rsenal on a 1903 deep dive in the below video. They cover everything from the .30-03 and early rod-type bayonets to oddball WWI spin-offs like the Air Service Model, the periscope-equipped trench guns like the Guiberson, the Pedersen semi-auto and Warner-Swasey sniper variants. 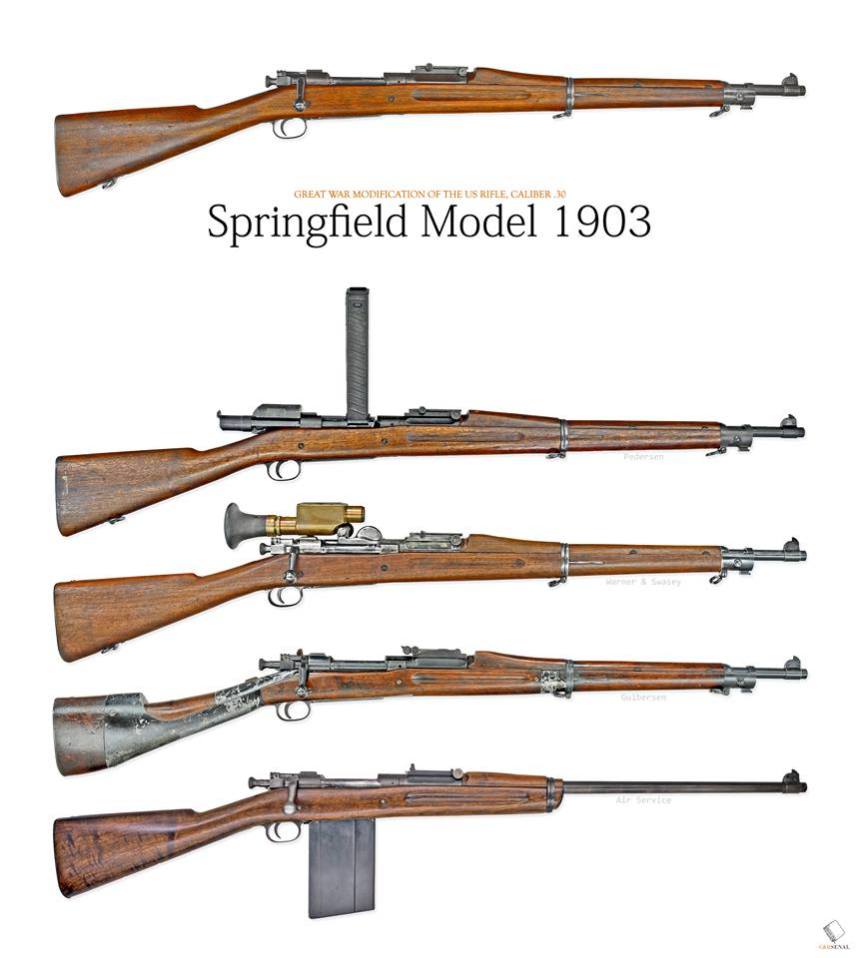 Doughboy tactical lights of a century ago

In the World War One era, the U.S. Army did a number of low key experiments in attaching lights to small arms for various purposes. Here are two rather steampunk examples that I stumbled across in the Springfield Armory Museum Collection.

This was the SIRT gun of the 1900s– if only the bulbs didn’t keep breaking!

The construction of this pistol is as follows: The lamp itself is a small tungsten bulb, such as is used in small Ever-Ready pocket flashlights….this lamp is mounted on an empty cartridge case, one terminal being grounded to the case, the other terminal is carried to the insulated base of the cartridge from which a small wire leads to a switch in the upper part of the magazine, which is operated by pressing on the trigger pistol. From this switch, another wire leads to the to the top terminal of battery concealed in lower part of the magazine, the other terminal or battery is grounded to the receiver through the follower and magazine.

In front of the lamp a tube carrying a lens is inserted in the barrel being held there by friction between its outer surface and the lands of the barrel. This tube can be moved in or out to change the focus….

“This Colt M1911 is the only “Flashlight Pistol” ever made. This training pistol would project a light onto a target to show where the bullet would hit. The lens on the tip of the barrel projected a light from inside that was powered by a battery concealed in the magazine. While the Flashlight Pistol did work, it was determined not to be sturdy enough for use and rejected by the Secretary of War.”

Then there was the Neary Springfield 1903…

This 1909-made Model 1903 bolt-action rifle equipped with Thomas E. Neary’s sight illuminating device powered by three Ever Ready cells in the stock.

Oh yeah, you know this is what you came here for

Close up of the Neary sight light

It had three Every Ready batteries that dont look that bad for being from the 1900s!

This Model 1903 contains batteries in the butt stock that powers light bulbs on both sides of the sight. Tested at Rock Island Arsenal, problems were found with the light beam obscuring the front sight, making the gun difficult to aim. This design was determined to be impractical. Later, during conservation work, the rifle was x-rayed showing the battery design hidden in the stock.

This is a very unusual and very rare gun. It features tiny lights to illuminate the front and rear sights. They are powered by three dry cell batteries which are housed inside the butt. Wires run from this power source through the stock – terminating inside the trigger-guard cavity and also at the nose-end of the forestock. The batteries were swollen and only the outermost one was initially removed. This was accomplished by tapping the butt end repeatedly with a leather hammer until the outermost battery was eventually backed out. The next battery followed the first part-way out and then was stuck. The was confirmed by X-radiography a (see photo) which showed the innermost battery pushed fully outward by its spring. The middle battery was removed by drilling through its lead end and then grabbing it with a strong dental pick followed by long-nosed pliers. The third battery came right out.” – David Arnold, NPS Conservator

Guess they figured tracers were an easier and more effective way of firing in the dark at the time or to pop a flare.

Of note, SA also mentions that, “President Theodore Roosevelt was given a M1903 rifle with a Neary front sight illuminating device. This rifle was threaded at the muzzle for a Maxim silencer and fitted with a Warner & Swasey musket sight.”

Now THAT would be a find!