Across two weeks in late March and early April 1983, 40 ships of the U.S. Navy and Coast Guard along with the Royal Canadian Navy, including 300 aircraft and 23,000 Sailors, Coasties and Marines, joined in what was termed at the time “the largest fleet exercise conducted by the Pacific Fleet since World War II.” The stomping ground for Fleet Ex ’83-1 was the Northern Pacific near the Aleutian Islands.

Yep, the NORPAC in Winter. 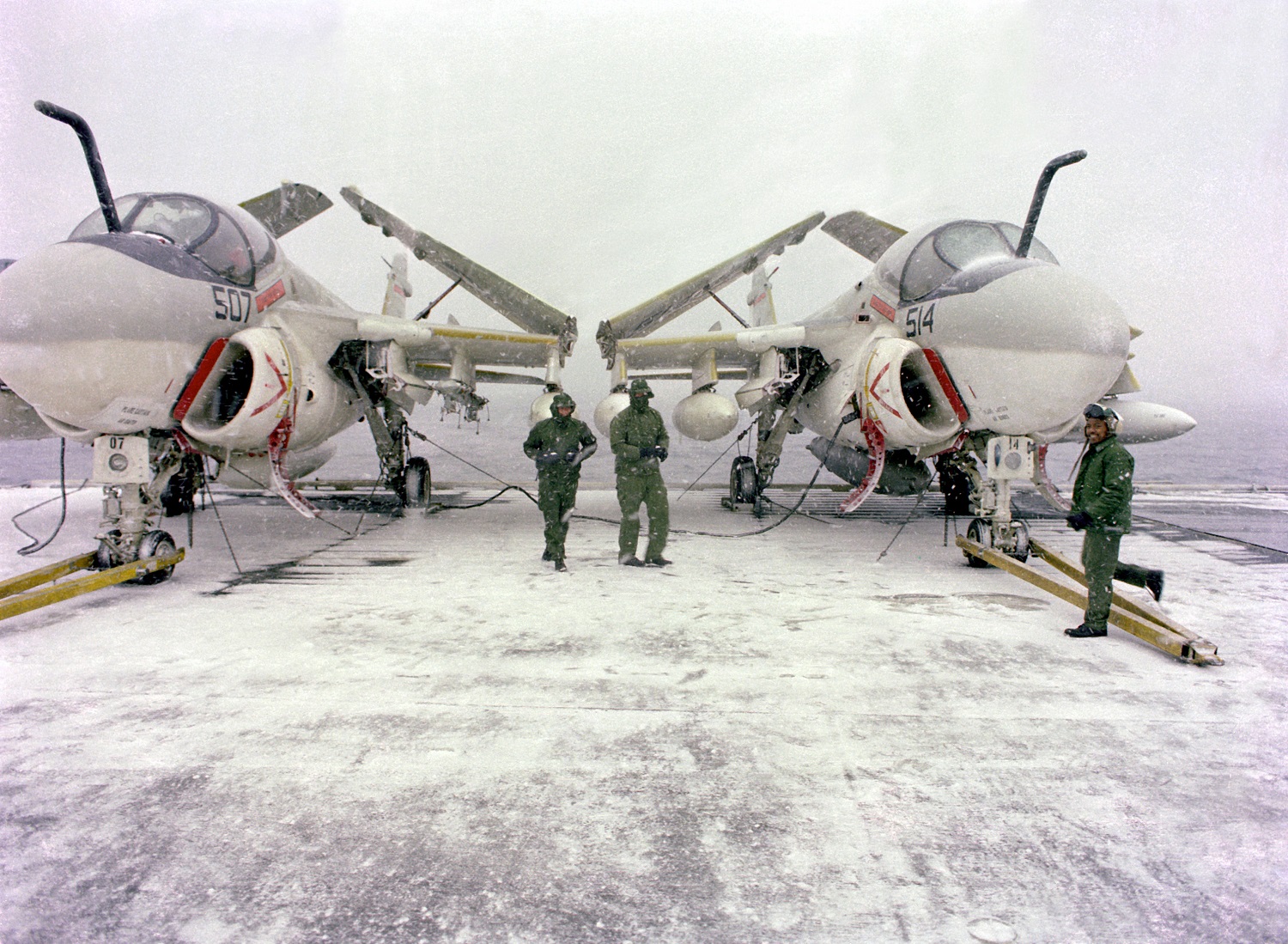 Apr 1, 1983 – Flight deck crew members service two A-6E Intruder aircraft on the snow-covered flight deck of the aircraft carrier USS CORAL SEA (CV-43) during the U.S. 3rd Fleet North Pacific exercise NORPAC. The joint Air Force and Navy exercise not only provides training for fighter pilots and tactical controllers but also tests the ability of those services to operate together for the defense of Alaska. The aircraft are of Carrier Air Wing 14, Attack Squadron 196 (VA-196) “Main Battery” who flew Intruders from October 1966 until their disestablishment in March 1997 as the last USN A-6 squadron. DN-SC-93-00830 via the USS Coral Sea Ageless Warrior Association

A bow view of the aircraft carriers USS CORAL SEA (CV-43), right, and USS MIDWAY (CV-41) left, and the nuclear-powered aircraft carrier USS ENTERPRISE (CVN-65), center, underway with a task force during CINCPAC Exercise Fleetex ’83. The U.S. Navy, Air Force, Coast Guard, and the Canadian navy are participating in the exercise near the Aleutian Islands of Alaska. 4/13/1983 PH2 Loveall photo, DN-ST-84-05321 via NARA.

Besides a big flex of naval muscle on the ramp-up to the Lehman 600-ship Navy, the exercise proved a great intel scrape, via a scholarly paper by Andrew R. Garland at UNLV.

Posted on July 3, 2020 by laststandonzombieisland 2 comments

The 1976 Bicentennial celebration these days is probably best remembered for the occasional side-drum Minuteman quarter coin they find in their change.

However, for those who don’t remember or weren’t around, the year saw a host of NAVAIR assets with special livery. The time was a curious crossover from the Navy and Marine Corps, as it was the twilight of Vietnam-era assets such as the A-4, F-8 and F-4, while new warbirds such as the F-14 were coming online.

The below images are from the NHHC Photographic Section, Navy Subject Files, Aviation (120); the National Archives, and the National Naval Aviation Museum.

Enjoy, and stick a feather in your cap, you Yankee. 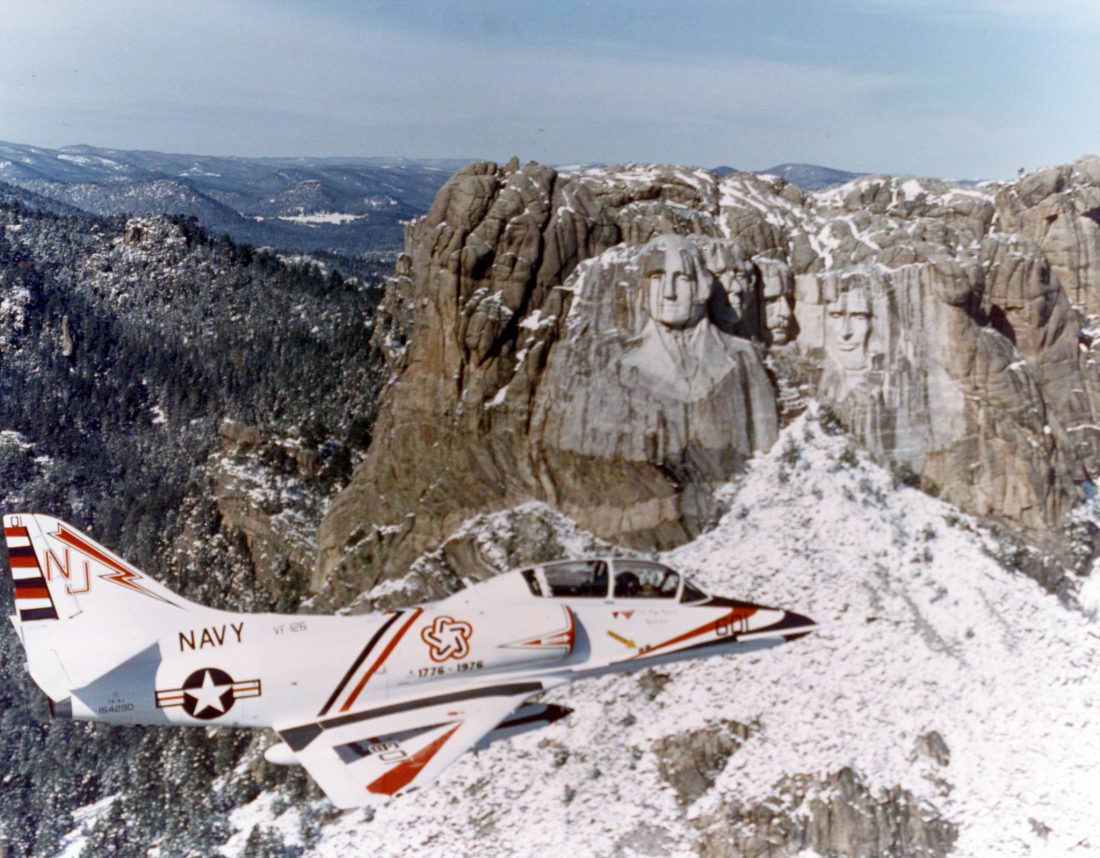 Bicentennial Douglas TA-4J Skyhawk BuNo 15-4290 of the “Bandits” of VF-126 speeds past Mt. Rushmore, circa March 1976. This Navy photo was published on the front page of the LA Times, as well as other major regional newspapers, the last week of May 1976

F-14A Tomcat BuNo 15-9616 of VF-124 “Gunfighters” Miramar Naval Air Station in Bicentennial colors, April 1, 1976. Of note, the Tomcat had only entered deployable service a three years before and the “Wolfpack” and “Bounty Hunters” of VF-1 and VF-2 had flown CAP over the Operation Frequent Wind evacuation of Saigon in April 1975. PH3 Bruce Gray DN-SC-88-06706 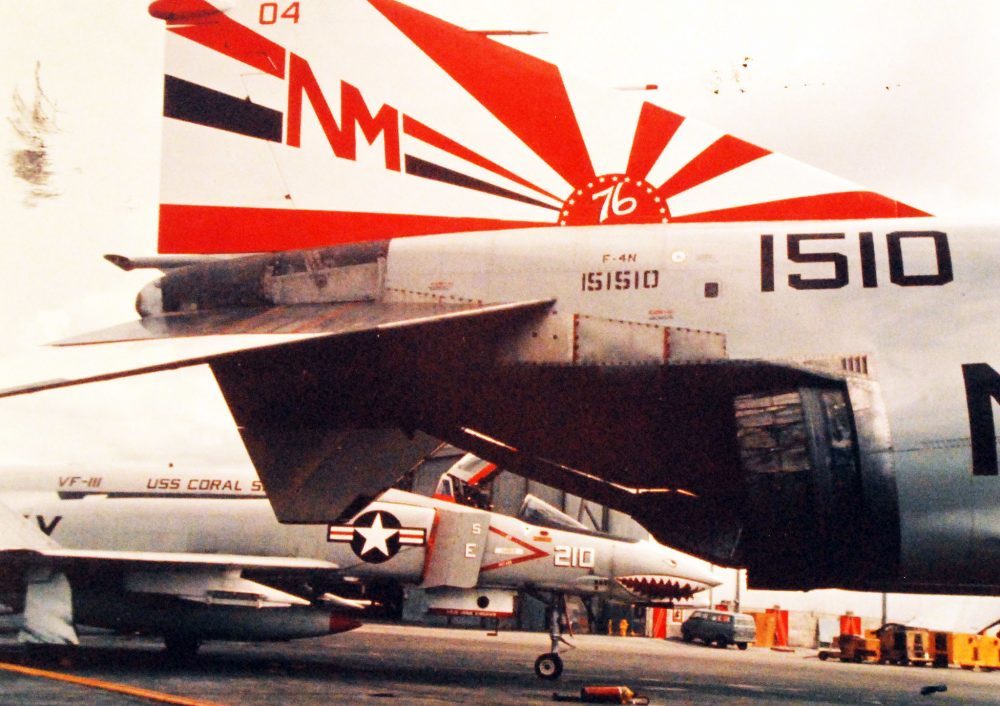 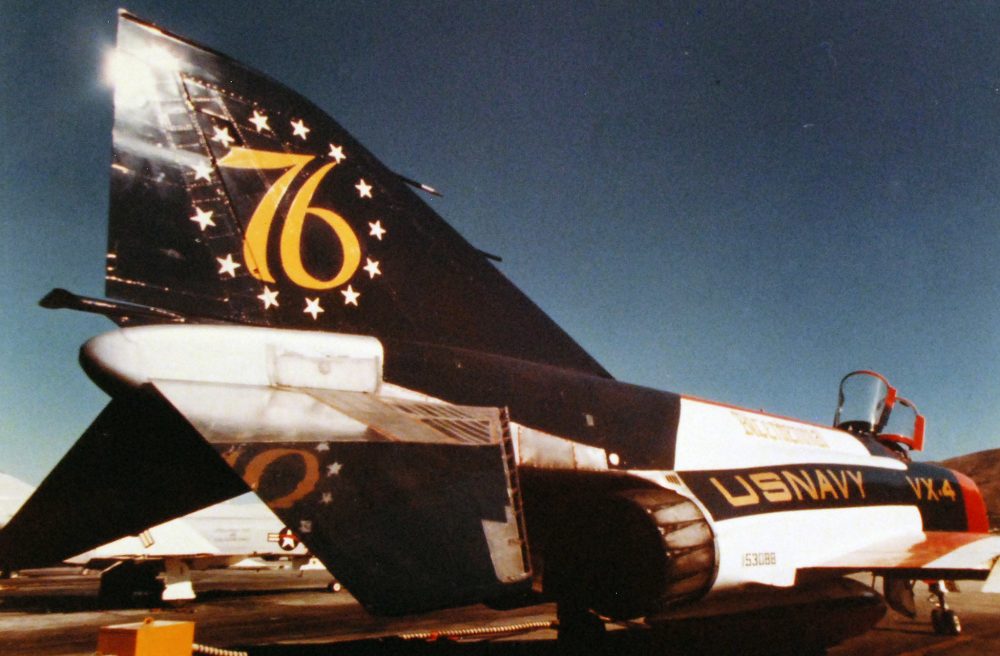 The Marines also got into the act, of course.

A U.S. Marine Corps McDonnell RF-4B Photo Phantom (BuNo 153101) from Marine Reconnaissance Squadron VMFP-3 “Eyes of the Corps” in flight. The plane is painted in US Bicentennial markings. Flying out of El Toro, this plane deployed on USS Constellation the same year with Det RF-10. NNAM

And another 1976 holdover, since you came this far: 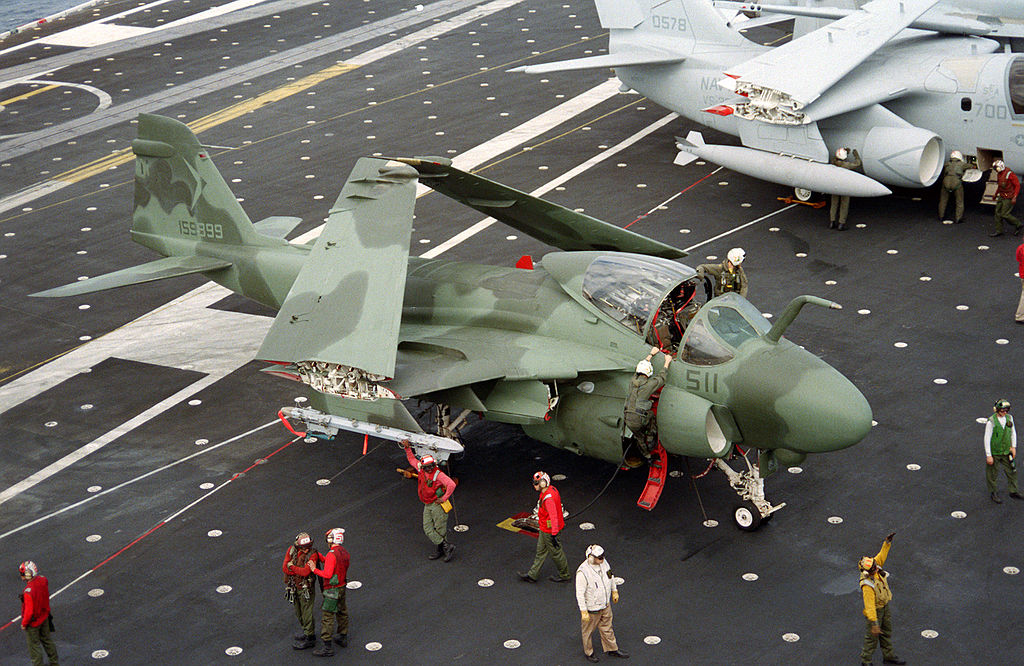 In the background is a Lockheed S-3A Viking (BuNo 160578) from anti-submarine squadron VS-33 “Screwbirds”. Both squadrons were assigned to Carrier Air Wing 9 (CVW-9) for a voyage aboard Constellation from San Diego, California, to Norfolk, Virginia, around Cape Horn from February to April 1990.

Interestingly enough, there is a more standard full-color image of the same Intruder in Navy service from 1981 when she was with the “Green Lizards” of VA-95.

Fast forward to today and Intruders, Vikings, Connie, America, the Boomers, Green Lizards, and Screwbirds are long gone, with VS-33 the last one to go, disestablished in 2006.