Posted on April 10, 2013 by laststandonzombieisland 2 comments

Here at LSOZI, we are going to take out every Wednesday for a look at the old steam/diesel navies of the 1859-1946 time period and will profile a different ship each week. – Christopher Eger

Here we see the Swedish Pansarskepp HSvMS Gustav V as she looked in broadside in the 1940s. Pansarskepps ( literally “armored ships” ) was a peculiar design that was popular in the Baltic from about 1900-45. These short, shallow-draft ships could hug the coastline and hide from larger capital ships while carrying big enough guns to be able to brutally bring the pain to any landing ship escorted by a shallow draft light cruiser or destroyer approaching from offshore. Sweden had kept out of wars since Napoleon was around, but she was still very wary of not only Russian and German but British designs on the Baltic. With her neutrality only as good as the ships that could protect it, the country built a series of 15 coastal defense vessels or Pansarskepps from 1888-1918.

And no, they are not commonly referred to as ‘parsnips.’

Gustav V in her WWII camo. It was a green Baltic battleship with a white ‘coast guard’ style racing stripe so that Swedish coastal artillery kept the friendly fire to a minimum.

The Gustav V, as you can see, was the last of the baker’s dozen of these craft to come off the line in Sweden and by all rights, the most advanced of the design. Laid down at Kockums, Malmö (the same company that makes Sweden’s AIP Subs today) on 12/1914, just four months after the outbreak of WWI.

She was launched on 31/1/1918 and finally commissioned in January 1922. She was quite a bit longer than her 1912-designed sister ship and class leader Sverige. This fact, coupled with minor changes to the ship’s armament and major ones to her engineering made Gustav V was the crown jewel of the Swedish fleet from 1922 through 1957.

Note the pre-WWI style of ornate stern work. The US and other Western navies did away with this around 1909 but the Gustav V, completed in 1922, still retained this classic styling from a more civilized era

She served in WWII and helped keep Sweden neutral even with the large Kriegsmarine and Soviet Navies coming within a very close range on occasion. The Weimar Germany-era Deutschland class was a series of three Panzerschiffe (“armored ships”), better known as Pocket Battleships, which were based in part from lessons learned by the Swedes with the Gustav. 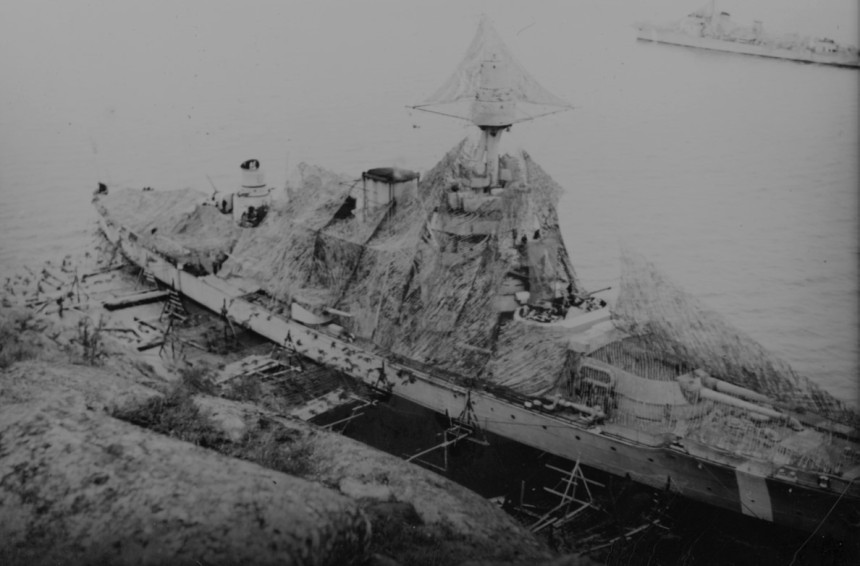 When compared,  the 14500-ton SMS Graf Spee carried six 11-inch and 8x 5.9-inch guns to the 7700-ton Gustav V’s four 11-inch and 8x 5.9-inch guns. The Swedish ship had much heavier armor but the German ship was built to run five knots faster and make round-the-world cruises, something the Swedes had no use for. As a final proof-of-point, the Gustav could float and fight in 20-feet of water whereas the German pocket battleships needed 24 (and a Soviet Gangut class battleship required 30).

So the Swedes had a group of tiny battleships, about the size of a frigate in today’s navies, for almost forty years. The 1938 edition of Jane’s Fighting Ships even lists the Swedish Pansarskepps of the Sverige class as battleships.

Built on hulls that were only about the size of today’s frigates, the Gustav carried an armament larger than any gun-armed cruiser. It included four large 11-inch guns and 8 smaller 5.9-inchers.

Well, Gustav lived a quiet life and in 1957 at age 35 was tied up to the pier for the last time– the Soviets had decommissioned the last of their WWI-era Gangut class battleships the year before. Her two sister ships, Sverige and Drottning Victoria were laid up in 1947 and their parts had been used to help Gustav V stay operational for another decade.

But her story was not over. Gustav’s 8x 152 mm (6 inch 50 cal.) Bofors QF guns were removed and mounted around Sweden for use as Coastal Artillery should the Soviets (or Germans, or Norwegians, or British, or whoever feel froggy) and were only retired in the 1980s. The disarmed ship herself was still used as a training hulk and pierside until 1970 when she was scrapped.

The end of the Pansarskepp era. 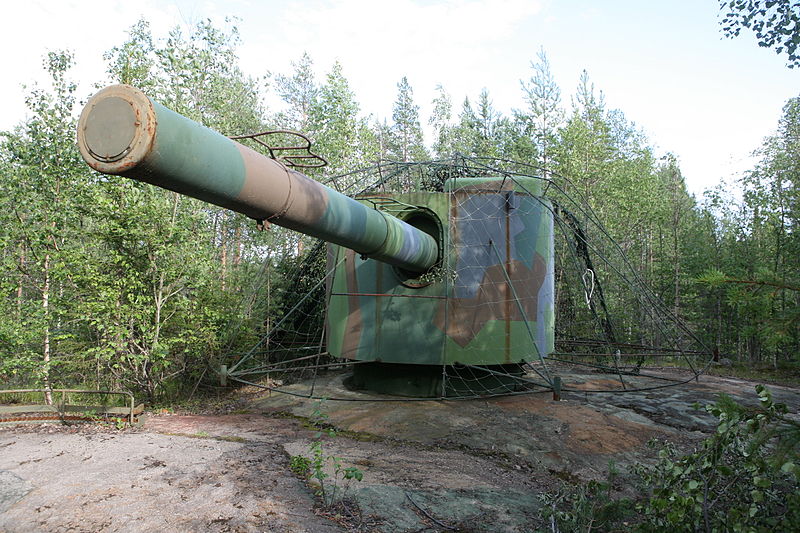 A few of her guns still remain emplaced around Sweden to this day. While its 1900s tech, these EMP-immune guns could ruin the paint job of Soviet ships well into the 1980s if needed. The Swedes no longer use these guns, but still have their breech-blocks (just in case)

In fact, when Gustav was scrapped, she was arguably the only battleship still ‘in service.’ At the time the US Iowa-class battleships were all in mothballs and had been since the 50s. The British Vanguard was scrapped in 1960 and the Turkish battle-cruiser Yavuz (formerly the Kaiser’s Goeben, launched in 1911) had been struck in 1954 by the Turks and her hulk scrapped in 1973 after an offer to sell her back to Germany was refused.

Guess the Swedes had the last laugh on that one.

2 shafts; Westinghouse Geared Turbines (Manufactured by Motala Company) in Gustaf V 22,000 SHP; originally with 12 Yarrow-type coal-fired boilers with (originally) 761-tons bunkerage of coal. The provided a nominal range of 3300-miles. This was seen as plenty for the Baltic region of operations.  In the 1930s half of the ships, 12 boilers were replaced by 2 oil-burning Penhöet type boiler.  This upgrade slightly increased speed and allowed the ship to use both oil and coal for strategic reasons to operate on alternative fuel if the Swedish oil supply was ever cut off). Fuel stowage was 360ts of coal and 273ts of oil after this.

The range of the 281 mm (11 inch) main-artillery was upgraded by new ‘Arrow Point’ ammunition. An upgrade at the time to the guns that would have enabled them to fire to 35-degrees elevation (from the 1912-era 25-degrees) which would have added some 10,000-m to their range, was canceled.

If you liked this column, please consider joining the International Naval Research Organization