Many of these regiments still issued the knee-length pleated uniform kilt for field dress as late as 1942 and Highlanders sent to France with the BEF went to the Continent in 1939 wearing their traditional uniforms.

Today the pipers of the Scots Guards and the Jocks of the Royal Regiment of Scotland as a whole still wear the Type 1A Military Kilt on  occasion (although the latter includes several lowland regiments that have been amalgamated) and to keep you straight on how to do that properly, check out the hilarious instruction from CSgt Benson, Master Tailor of 2 Scots, below:

Today is Red Hackle Day! This annual celebration on 5 January commemorates the award to The Black Watch (3rd Battalion, Royal Regiment of Scotland, 3 SCOTS) of the right to wear the Red Hackle in their caps. 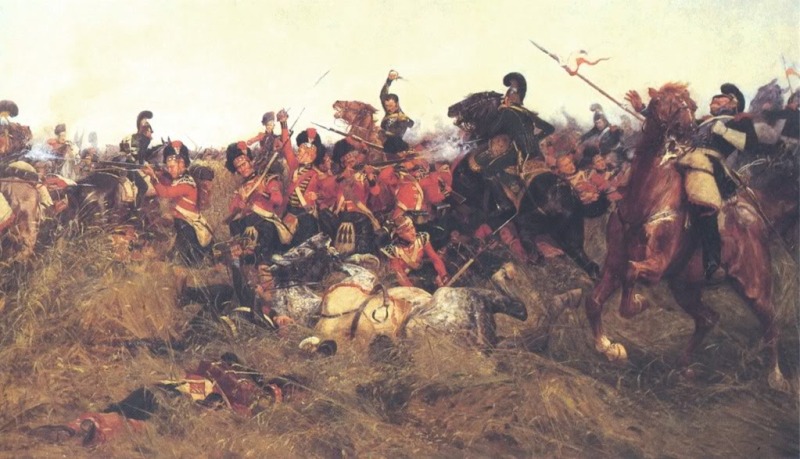 The Black Watch at Quatre Bras, 1815, by William Barnes Wollen. Note the red hackles in their caps

The origin of the wearing of the Red Hackle is uncertain. There is evidence that it was worn by the 42nd in North America in the 1770s, however a 19th Century tradition ascribes the award of the Red Hackle to an action at the battle of Geldermalsen in 1795 when the 11th Light Dragoons retreated, leaving two field guns for the French. The Black Watch promptly mounted an attack and recovered the guns.

It was for this action that the Red Hackle was allegedly awarded and on the King’s birthday on 4 June 1795, there was a parade at Royston in Hertfordshire, when a Red Hackle was given to every man on parade. It was not until 1822 that the Adjutant General issued an order, confirming that only The Black Watch would have the privilege of wearing the red “vulture feather” in their bonnets.

In 1919 the Central Committee of The Black Watch Association formalised the date on which the Regiment should celebrate “Red Hackle Day”.

The tradition is carried on to this day.

Date 03/09/11 Location Fort George Invernes-shire , Photo by Mark Owens: His Royal Highness The Duke of Rothesay inspects troops at Fort George today.
Photo Caption: DUKE OF ROTHESAY VISITS 3 SCOTS, Today [Saturday, 3 September 2011] His Royal Highness The Duke of Rothesay visited The Black Watch, 3rd Battalion The Royal Regiment of Scotland at their Fort George base. The Battalion paraded its new Colours in the presence of HRH and Battalion’s families. The Parade was followed by a BBQ lunch, which led into a number of afternoon activities, encompassing military stands, entertainment for the children, and an inter-company competition. The day provided an opportunity to assemble the Battalion community for the final time prior to 3 SCOTS forthcoming deployment to Afghanistan , and allowed HRH – the Battalion’s Royal Colonel – to meet soldiers and their families.

Posted on March 26, 2017 by laststandonzombieisland 3 comments

Robert Gibb was as Scottish as they came, born in Laurieston, near Falkirk 28 October 1845, and educated in Edinburgh. He studied at the Royal Scottish Academy and exhibited his first of more than 140 works there in 1867. It should come as no surprise that he was one of the great chroniclers of Highlanders in the field.

His first stab at the military genre came with Comrades in 1878, depicting men of the 42nd Highlanders (The Black Watch) in the Crimea.

The original version of this work was painted by Gibb in 1878 and is currently unlocated. The painting became iconic. While reading a life of Napoleon, the artist made a sketch of the retreat from Moscow. The dominant group of three figures in the foreground was then isolated and adapted to form an independent composition depicting a young soldier whispering his dying message to a comrade who seeks to comfort him in the snowy wastes of the Crimean winter. Photo credit: The Black Watch Castle & Museum

The Thin Red Line, oil on canvas, by Robert Gibb, 1881, showing the stand of a handful of the 93rd (Sutherland Highlanders) Regiment of Foot at the Battle of Balaclava stopping 2,500 massed Russian cavalry. Currently on display at the National War Museum of Scotland, the venue notes “The Thin Red Line is one of the best known of all Scottish historical paintings and is the classic representation of Highland military heroism as an icon of Scotland.”

Saving the Colours; the Guards at Inkerman (1895 – Naval and Military Club, London)

Alma: Forward the 42nd. This 1888 oil on canvas by Scottish artist, Robert Gibb (1845–1932), depicts the Battle of Alma, in Sebastopol, Crimea on the 20th September 1854. Black Watch, in full review order, are advancing towards enemy guns on heights above, with Field Marshal Sir Colin Campbell (later Lord Clyde) shown giving the historic order from which the painting is titled. In left foreground are two Russians, and in distance stretch of sea with fleet in action. The painting was gifted to Glasgow Museums collection by Lord Woolavington in 1923. Kelvingrove Art Gallery and Museum

Besides the Crimea, he also portrayed the Scots at Waterloo.

Closing the Gates at Hougoumont, 1815. Men of the Coldstream Guards and the Scots Guards are shown forcing shut the gates of the chateau of Hougoumont against French attack, with Lieutenant-Colonel James MacDonell forcing back the gate to the left. The moment of crisis shown in the painting came when around 30 French soldiers forced the north gate and entered into the chateau grounds. Before others could follow, the gates were forced shut again, and the French soldiers still inside were killed. Wellington himself had said the success of the battle turned upon the closing of the gates at the chateau. Photo credit: National Museums Scotland

Late in his life, he also painted the Highlanders in the Great War.

He produced Backs to the Wall at age 84. In this painting, the artist shows a line of khaki-clad Scottish troops standing defiantly at the critical moment, bayonets fixed– with the specters of fallen comrades behind them.

The work was inspired by Field Marshal Sir Douglas Haig’s famous Special Order of the Day at the time of the Great German Offensive of April 1918.

There is no other course open to us but to fight it out.  Every position must be held to the last man: there must be no retirement.  With our backs to the wall and believing in the justice of our cause each one of us must fight on to the end.  The safety of our homes and the Freedom of mankind alike depend upon the conduct of each one of us at this critical moment.

Gibb held the office of King’s painter and limner for Scotland for 25 years and was Keeper of the National Gallery of Scotland from 1895 until 1907.  The artist died at his home in Edinburgh in 1932, and he was given a full military funeral with an honor guard provided by the Black Watch.

Many of his works are on display across the UK and are available online.