The below ~4 minutes show what’s it like to fly an F-35 off the flight deck of HMS Queen Elizabeth with some great photography that displays, if nothing else, that the RN’s combat camera guys are on point.

The plane is painted in McClelland Barclay experimental camouflage design Number 2. Note gun-camera mounted on the starboard side of the fuselage, forward. Grumman F2F-1 fighters of Fighting Squadron Two (VF-2) are in the background.

Of course the U.S. Navy and Marines had legit issue with the Brewster F2A Buffalo, dubbing it “the flying coffin” when flying against highly trained Japanese pilots with arguably better aircraft but the Finns, who used 44 Model B-239 (export) F2As nicknamed Pylly-Valtteri (“Butt-Walter”) and Lentävä kaljapullo (“flying beer-bottle”) among others, made mincemeat out of Red Air Force planes for a time.

Lockheed Martin announced yesterday that the U.S. Air Force authorized extending the service life of the F-16 airframe from 8,000 Equivalent Flight Hours to 12,000. This means that, following F-16 Service Life Extension Program structural modifications, the typical late model F-16 in big blue’s inventory could operate for another 30 years (putting some distance between the need and the want in fielding combat ready F-35 units).

I mean, between them Japan, ROK, Greece, and Turkey are still flying hundreds of F-4 Phantoms in a combat role and the last of those left the assembly line in 1981– so it’s possible.

“This accomplishment is the result of more than seven years of test, development, design, analysis and partnership between the U.S. Air Force and Lockheed Martin,” said Susan Ouzts, vice president of Lockheed Martin’s F-16 program. “Combined with F-16 avionics modernization programs like the F-16V, SLEP modifications demonstrate that the Fighting Falcon remains a highly capable and affordable 4th Generation option for the U.S. Air Force and international F-16 customers.”

Validation of the extended flight hour limit directly supports the SLEP goal of extending the service life of up to 300 F-16C/D Block 40-52 aircraft. SLEP and related avionics upgrades to the Air Force’s F-16C/D fleet can safely and effectively augment the current fighter force structure as U.S. and allied combat air fleets recapitalize with F-35 Lightning IIs.

A second phase, or Part II, of the F-16 SLEP airworthiness process continues with the request for Military Type Certificate (MTC), which will be submitted to the Air Force’s Technical Airworthiness Authority in the coming months. Part II seeks to validate further extending the F-16’s operational life based on final service life analysis from extended durability testing.

Such mean things about the humble Buffalo

With concerns voiced this month in an April 14 Government Accountability Office report that the F-35’s Autonomic Logistics Information System, which Department of Defense officials have described as the “brains” of the fifth-generation fighter, that a failure “could take the entire fleet offline,” in part, due to the lack of a backup system, and “if required funding levels are not reached, the program’s procurement plan may not be affordable…” problems continue to mount for the ole F-35 which make off-the-shelf competitors such as Gripen, Typhoon and even the domestic F/A-18E/F look good in comparison.

Which brought the below editorial cartoon from SOFREP.com 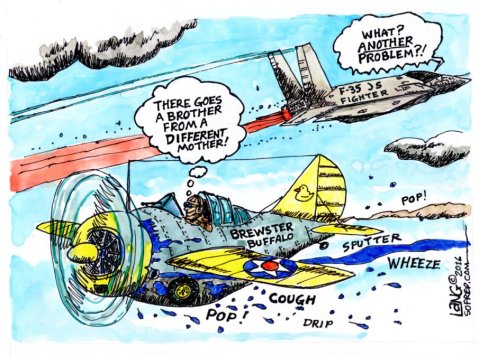 Which I think is just mean.

Of course the U.S. Navy and Marines had legit issue with the Brewster F2A Buffalo, dubbing it “the flying coffin” when flying against highly trained Japanese pilots with argueably better aircraft but the Finns, who used 44 Model B-239 (export) F2As nicknamed Pylly-Valtteri (“Butt-Walter”) and Lentävä kaljapullo (“flying beer-bottle”) among others, made mincemeat out of Red Air Force planes for a time.

Buffaloes of Lentolaivue 24 (Fighter Squadron 24) claimed a staggering 477 Soviet Air Force warplanes destroyed, with the combat loss of just 19 Buffaloes, an impressive kill/loss ratio of 26:1, while the top scoring Finnish ace, Ilmari Juutilainen, scored 34 of his 94½ kills in B-239s. 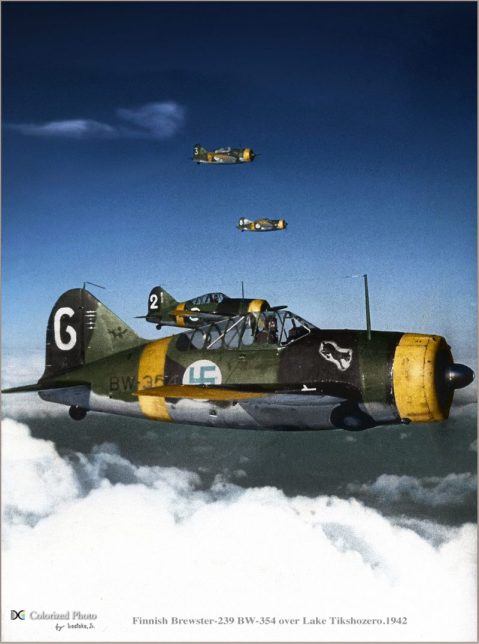 So maybe we just need  to export the F-35 to Finland and call it a day?

The Navy Is Doubling its Carriers

Back during the Lehman Navy of the Regan era, the 600-ship navy built around an incredible 15-Carrier Battle Groups was the pipe-dream that came very very close by 1989.

The Navy, down to about 240-ish ships now, is lamenting that they Only have 11 of the largest warships (Nimitz and Enterprise class CVNs) ever built and in the next few years this may shrink to 9 as the Enterprise is looking at retirement after 50-years of service and another carrier is down for an 18-month refueling period.

However, the Navy may soon be able to add 8 new carriers at the stroke of a pen, with another 2-12 on the drawing board.

The USS Wasp (remember the WWII Aircraft carrier of the same name?) LHD-8, officially an amphibious warfare ship, is returning to port after spending 18-days with two early F-35 Lightning aircraft on board.

While underway, the world’s first supersonic short take-off, vertical landing (STOVL) fighter logged more than 28 hours of flight time and completed 72 short take-offs and 72 vertical landings. Wasp crew members worked around the clock with pilots, engineers, mechanics and a wide-array of aeronautical professionals, both military and civilian to meet the mission of the F-35B sea trials.

While the US Navy had for the past twenty years had almost a  dozen LHA/LHD hulls to carry out the task of “Sea Control” with a fleet of 190 Marine AV8 Harriers, the Harrier by and large is a daylight only, subsonic strike aircraft, not a dogfighter. The vaunted 3rd Generation F-35 is supposed to be everything the Harrier was not in a V/STOL platform.

The fact that the Wasp is the same size as the new French De Gaulle class carrier, as well as the same size as the WWII-era Essex class carriers that served in the US Navy until 1989 (see the USS Lexington) in one role or another is a valid point. With 2-3 squadrons of F35’s aboard along with a detachment of SH-60s as plane guards the 8 LHDs on the USNs payroll can earn their keep as emergency aircraft carriers if things ever get hot in the China Sea….  Looks like the Navy finally may have 15-carrier (or more) battlegroups in the works…

David Axe over at Danger Room reports that the vaunted USAF, home of the billion dollar unflyable airplane projects, is having some issues with its stealth fleet…..This is almost making the Navy’s LCS project look good!

In past few decades, the U.S. Air Force has spent untold billions researching and developing a family of stealth fighter jets that are supposed to be generations ahead of any dogfighters in the sky.

But after building more than 170 F-22 Raptors and a handful of F-35 Joint Strike Fighters, not a single one is available for service. The Air Force currently has zero flyable stealth fighters. None.

The vaunted F-22 has been grounded with a possible faulty oxygen system since May. Production of the last few Raptors is even on hold, because the jets can’t fly from the factory.

Last week, test flights for the newer F-35 were suspended, too, because of a valve problem in the plane’s integrated power package. It’s the third time this year that JSFs have been forbidden to fly. Ground tests have resumed, and flight tests may resume as early as next week. Then again, they may not.

Yesterday, the U.S. military committed to spending another $535 million to buy 38 more Joint Strike Fighters — a family of stealth jets that are supposed to become the multipurpose, affordable workhorses of tomorrow’s fleet. Ninety percent of America’s combat aviation power is eventually supposed to come from the jets’ three variants.

But the jets have been anything but cheap. The current cost for the JSF program is $382 billion and rising for more than 2,400 aircraft. No wonder just about every major deficit reduction plan scales back the JSF effort in some way.

And, at the moment, they’re not producing any combat power, either.

Back in 2002, the plan was to have more than 90 JSFs flying by next year. As things currently stand, the Air Force and Navy might not get their variants until 2016. The Marines — who knows?

For now, every available penny in the JSF program is tied up in getting the jets back into the air and their programs on track.

“The so-called ‘fifth-generation’ fighters have certainly revolutionized U.S. air power,” Ares’ Bill Sweetman noted, “if not quite in the way anyone had in mind.”