Beretta will offer their NGSW Rifle to the People

Firearms powerhouse Beretta has announced it will support True Velocity in the production of the proposed Army Next Generation Squad Weapon and develop commercial variants.

The announcement came this week during SHOT Show in Las Vegas, where True Velocity is exhibiting. True Velocity’s subsidiary LoneStar Future Weapons is the prime contractor in the group’s bid for the NGSW program, an initiative to replace the Army’s current 5.56 NATO platforms with a new series of small arms using a 6.8 caliber cartridge. The variant submitted to the Army for testing is the RM277, chambered in True Velocity’s proprietary 6.8TVCM composite-cased cartridge.

In addition, Beretta will take the lead in developing a semi-automatic variant of the RM277 rifle intended for sale in the U.S. commercial market. The latter could prove exceptionally popular should the platform secure the potentially huge NGSW award. 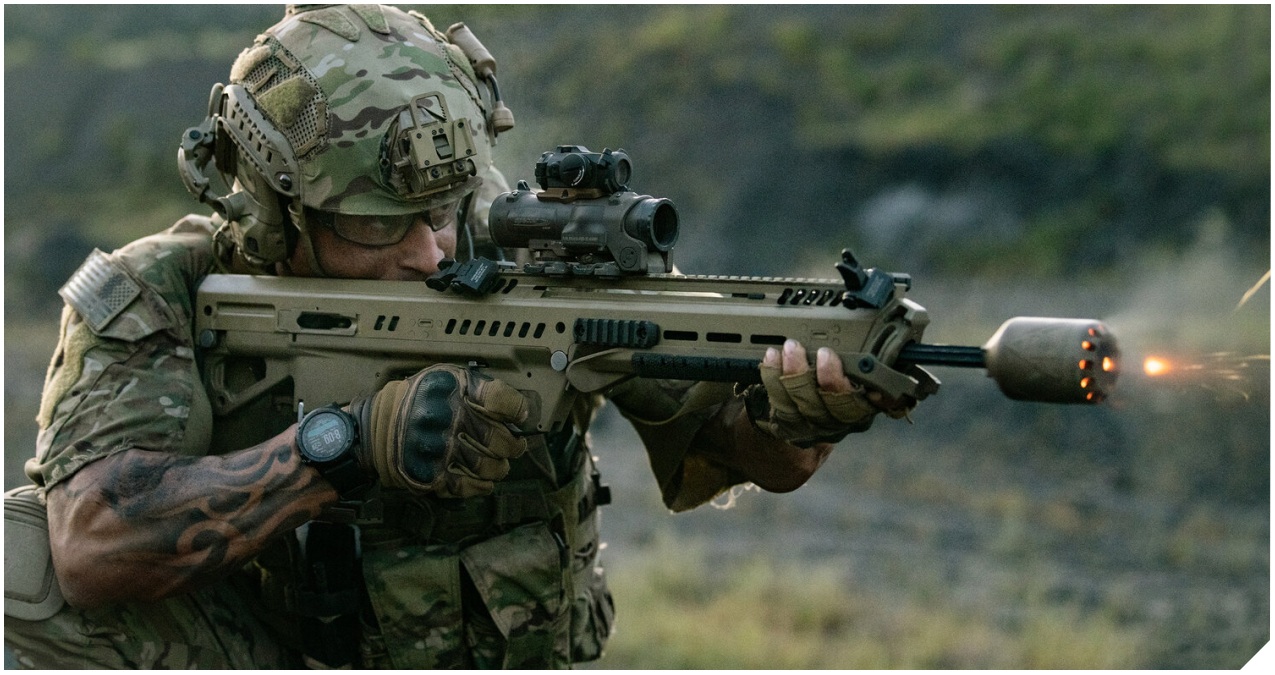 I’ve been talking a lot over the past couple of years about the U.S. Army’s Next Generation Squad Weapon program- which is rapidly coming to a head. While Winchester recently won a contract to set up the Army’s Lake City Ammunition Plant to make the NGSW’s 6.8mm ammo and Vortex pulled down a huge award to make up to 250,000 advanced optics for the weapons, the Pentagon has not decided which version of the NSGW-Rifle and NGSW-Automatic Rifle to order.

Current contenders for the weapons platforms themselves include Sig Sauer and two teams made up of defense contractor General Dynamics Ordnance Tactical Systems, working with Beretta and True Velocity; and AAI/Textron partnered with ammo firearms maker Heckler & Koch.

Well, it seems Sig is confident enough about winning the big teddy bear when it comes to the NSGW-R that they are now releasing a commercial variant of it, the MCX-Spear in .277 Fury (the company’s civilianized 6.8mm NSGW round.)

The Sig Sauer MCX-Spear is a multi-caliber platform that can swap between .277 Fury, 6.5 Creedmoor, and 7.62 NATO via a simple barrel change at the user level. It has rear and side non-reciprocating charging handles, a 6-position folding stock, a lightened free-float M-LOK handguard, and a full-length Picatinny top rail for optics and accessories. 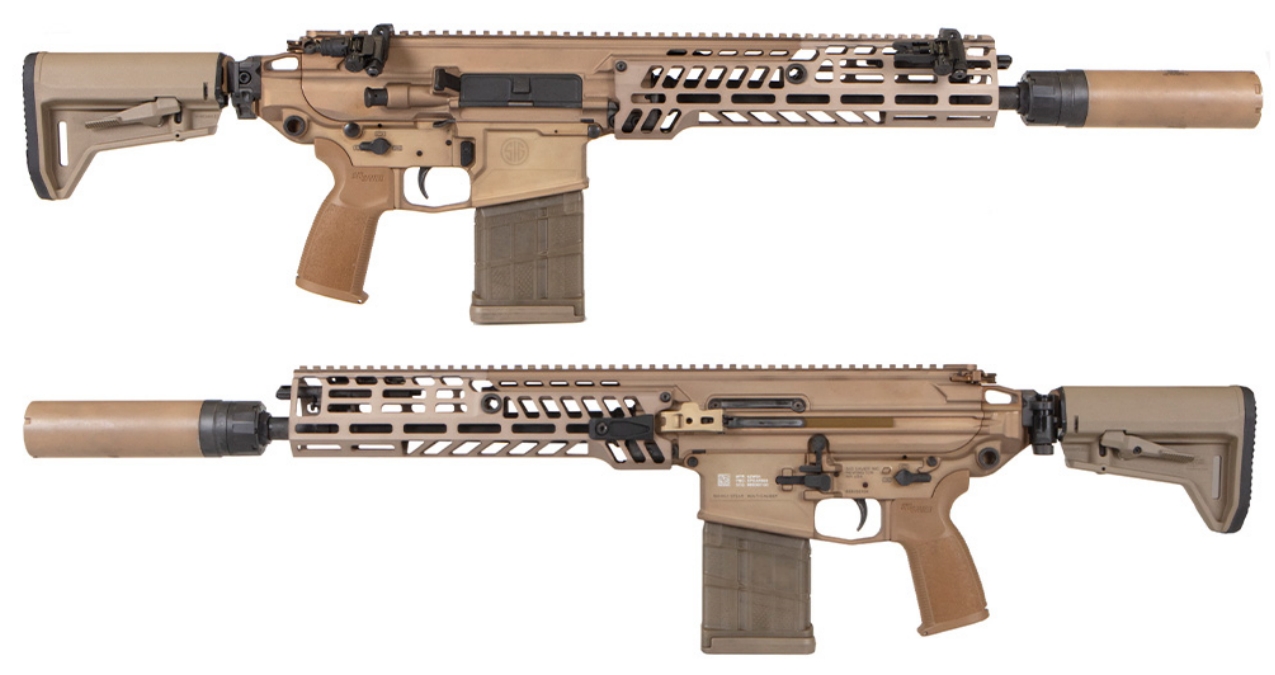 The overall length on the Sig Sauer MCX-Spear is 34.1-inches with the stock extended while the weight is 8.38 pounds. Listed with a 13-inch 1:7 twist, it looks like this will require an SBR stamp.

U.S. Army just a breath away from the Next Generation of squad weapons

Posted on January 10, 2022 by laststandonzombieisland 3 comments

The Army’s Next Generation Squad Weapons program– which plans to replace the 5.56 NATO caliber M4 Carbine and M249 SAW with two new man-portable weapons that share a common 6.8mm caliber– is right around the corner from becoming a reality.

In the past week, Picatinny Arsenal and Project Manager– Soldier Lethality, have issued a $20 million contract for Olin-Winchester to set up the Lake City Army ammo plant for the production of the new 6.8mm rounds in General Purpose (GP), Special Purpose (SP), Reduced Range (RR), and blank cartridges.

This was almost immediately followed up by the selection of Wisconsin-based Vortex to supply as many as a quarter-million optics for the country’s planned Next Generation Weapons platforms. The 10-year contract, announced late last week, covers the production and delivery of up to 250,000 XM157 Next Generation Squad Weapons-Fire Control systems. 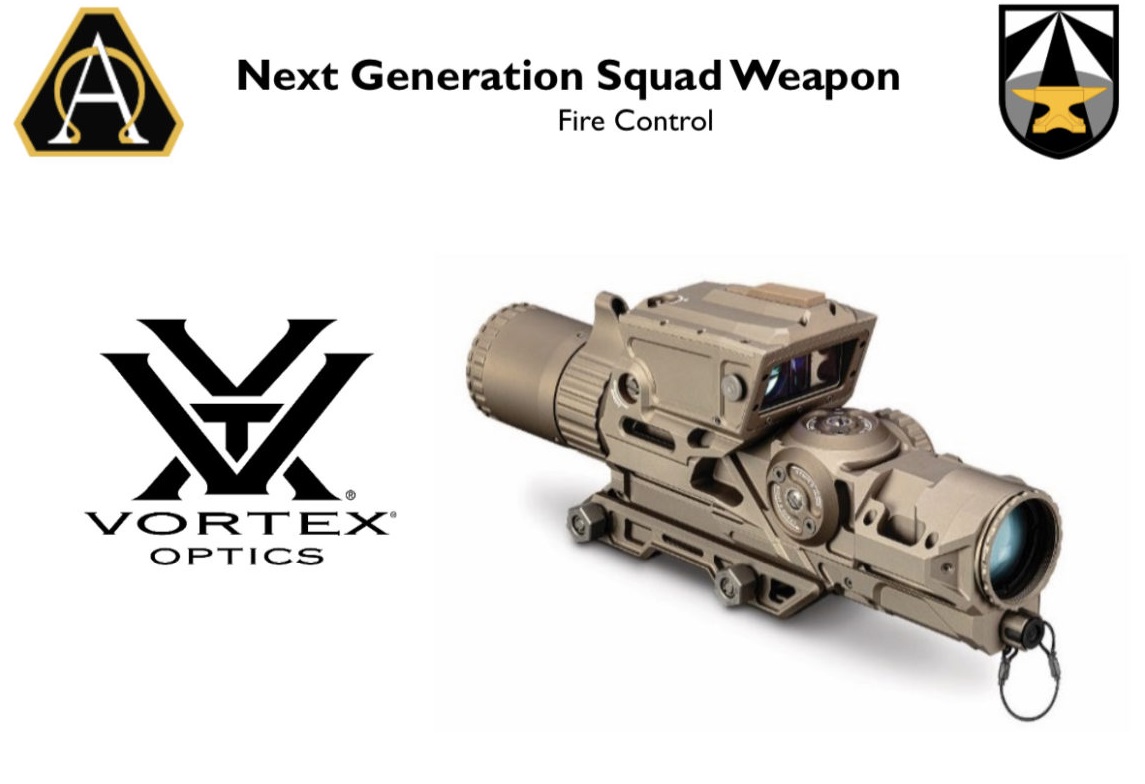 With the ammo being set up for production and the optics package selected, all that is left for the NGSW program is to announce the winner of the contract for the weapons themselves. The current contenders for that award, as listed by the Army, are SIG Sauer, General Dynamics– OTS, and Textron Systems.

An award is likely sometime in the coming weeks and would stand to become the biggest change in combat small arms since Curtis LeMay ordered a batch of early AR-15s from Colt for his USAF Security Police in 1962.

The firm-fixed-price award, for $88,275,000, was granted to Gen Dyn by the Air Force Life Cycle Management Center, based at Robins Air Force Base in Georgia. Classified as an indefinite-delivery/indefinite-quantity requirements contract, it will cover the purchase of new M61A1s in support of the F-16 fighter aircraft. Of this amount, some $7.8 million in funds set aside for Foreign Military Sales were obligated. Notably, 25 overseas allies fly the aircraft along with Venezuela, which probably doesn’t rate FMS dollars anymore.

More on the Vulcan contract, and Gen Dyn’s work on the Next Generation Squad Weapon for the Army, in my column at Guns.com.

The Army’s recently announced budget request for the fiscal year 2022 includes at least $114 million for new rifles, handguns, and the next generation of small arms.

While the overall FY2022 Defense Department Budget is $112 billion, most of the non-operational dollars are for high-level R&D and big-ticket items like the F-35 fighter. The Army’s budget book for weapons and tracked combat vehicles meanwhile has a low nine-figure ask when it comes to individual small arms.

The bulk ($97 million) is to go to the Next Generation Squad Weapons, with much of the balance to acquire new Barrett-made Precision Sniper Rifles, and a few crumbs for M4s, M17s, and the like.

Could the Army Ditch Brass for Plastic?

The hybrid polymer-cased cartridge, developed by Texas-based True Velocity as part of the Army’s Next Generation Squad Weapon program, is compatible with legacy firearms as well.

The 6.8mm TVCM composite case design, coupled with the Army’s 6.8mm (.277-caliber) common cartridge projectile, was originally developed and optimized for use in the NGSW-Rifle and NGSW-Automatic Rifle submissions submitted to that military program by General Dynamics-OTS. It performs better ballistically than 7.62 NATO and weighs 30 percent less.

However, using what True Velocity characterizes as a “switch barrel” capability, they have demonstrated it can work with much of the Army’s currently fielded small arms including the M240B belt-fed machine gun, the M110 semi-automatic sniper system, and the M134 minigun.

Which could mean that, even if NGSW tanks, there could be a revolutionary advance in the ammo used by U.S. troops in the near future. 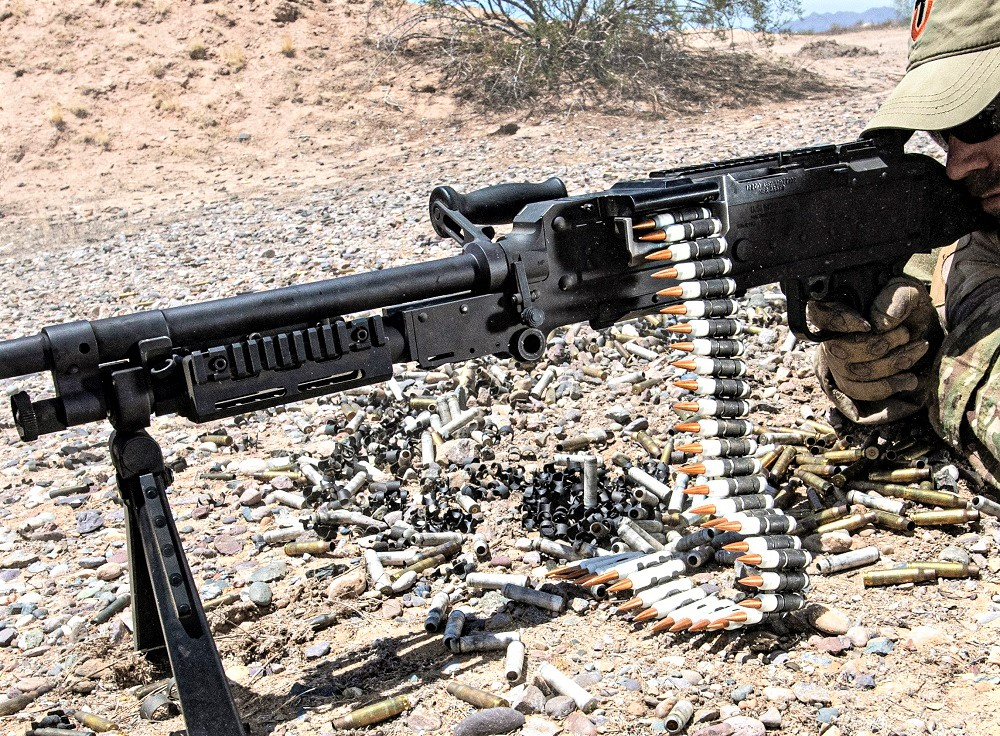 Sig Sauer, as I’ve covered a few times in the past couple of years, is one of the three teams who are in the running for the Army’s Next Generation Squad Weapons, a group of guns using the same 6.8mm caliber that is set to replace the M4 and M249 families. Further, they are the only one that is solely a firearms company and plans to do everything in-house as opposed to the other two teams which are made up of several sub-contractors. 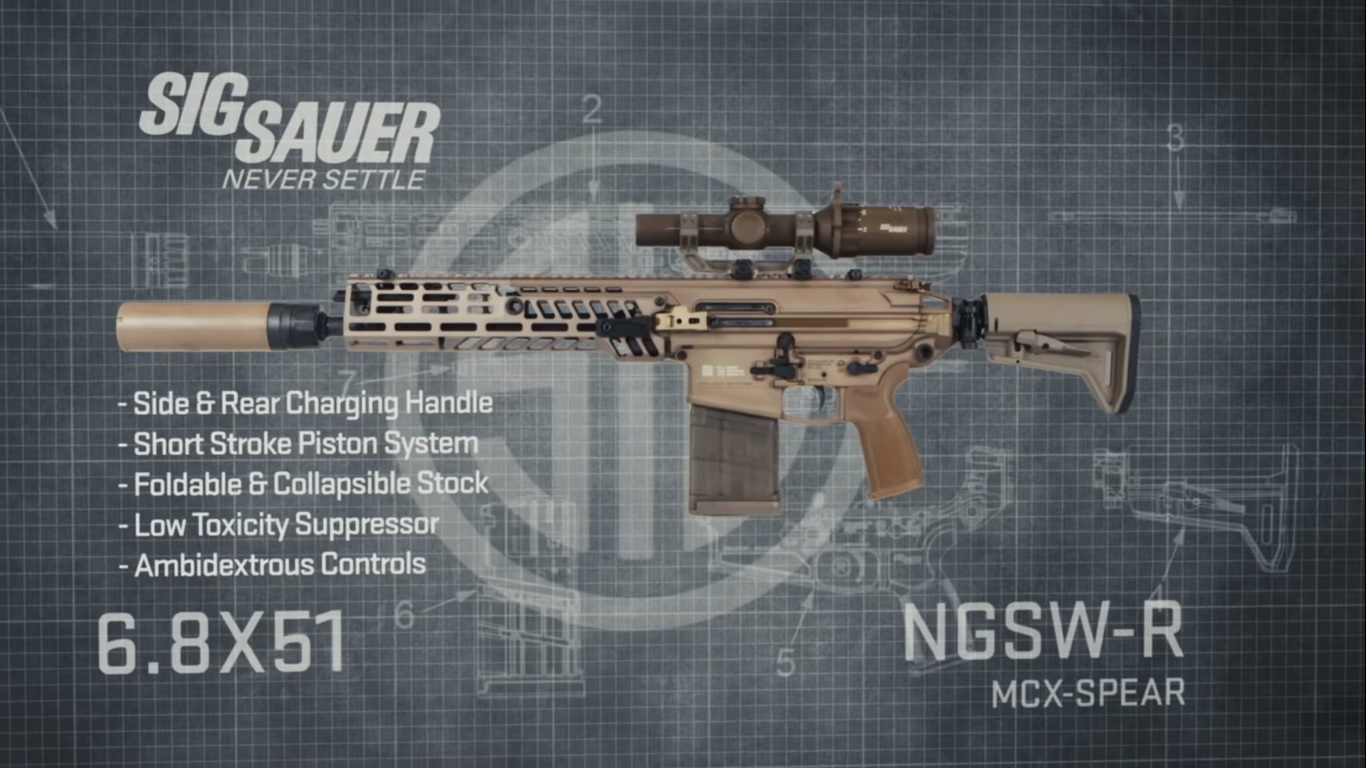 Sig’s Lightweight MMG is a belt-fed general-purpose weapon intended to become the Army’s NGSW-Automatic Rifle, replacing the M249 while hitting the scales at 40 percent lighter and with a round that has double the effective range of 5.56. (Photo: Sig Sauer)

Both platforms use Sig’s 6.8mm hybrid ammunition, which is billed as offering a significant reduction in weight over traditional ammo while offering better performance and greater penetration while using a 121-grain bullet. (Photo: Sig Sauer)

Further, Sig thinks they are positioned to pull it off, a move that, when coupled with the fact that their P320 pistol has been adopted as the M17/M18, would give the company the Pentagon small arms hat trick with the exception of 7.62 caliber platforms.

Sig Sauer this week announced it has completed the delivery of the company’s Next Generation Squad Weapons system to the U.S. Army.

The company is one of three contractors who in 2019 got the nod from the Pentagon to continue with the NGSW program. The sweeping initiative aims to replace the Army’s 5.56mm NATO small arms – the M4 Carbine and M249 Squad Automatic Weapon. Sig’s program consists of an in-house-designed lightweight high-performance 6.8x51mm (.277-caliber) hybrid ammunition, NGSW-AR lightweight machine guns, NGSW-R rifles (based on the MCX carbine), and next-gen suppressors.

They certainly look the part and, if selected, would give Sig the small arms hattrick as their P320s have been adopted as the DOD’s standard handgun to replace everything from the USAF’s lingering K-frame 38s to the Marine’s M45 CQB railguns and everything in between. At that point, the only man-portable system used by the Army not made by Sig would be the M240 and M2, which FN still has a lock on. 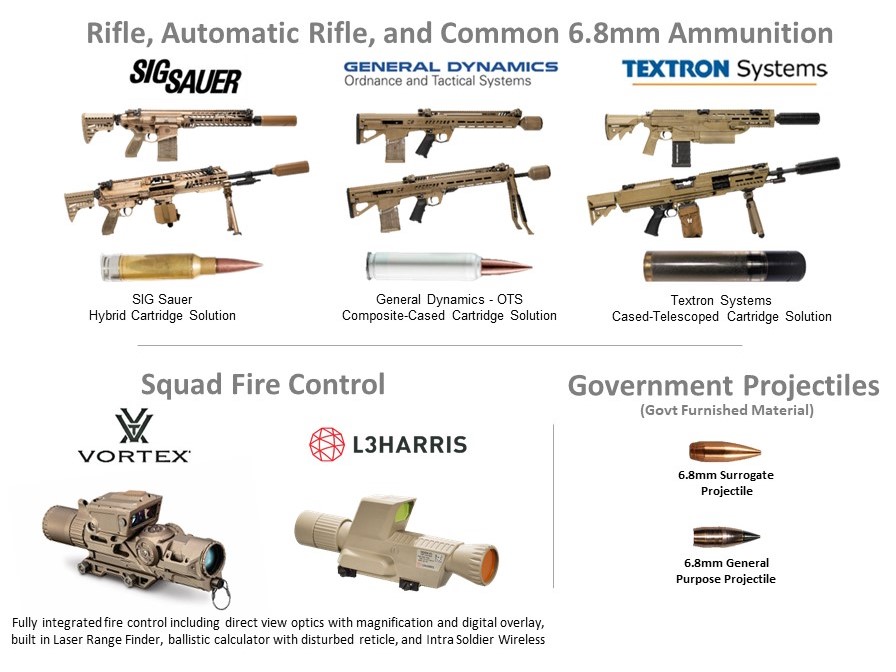 The U.S. Army is full-speed ahead on an initiative to select a new series of innovative 6.8mm-caliber Next Generation Squad Weapons to phase out its 5.56mm platforms for combat troops. However, it would seem the Department of the Army is hedging their bets with traditional systems just in case things don’t work out like planned such as in past ambitious programs for futuristic small arms.

In April, FN won a 5-year $119 million contract for new M4/M4A1 Carbines from the company’s South Carolina factory– where 500 of the shorty 5.56s roll out every, single, day.

And this week, Big Army likewise issued a $78 million award to FN for more M249s, the squad-level U.S-made variant of the FN Minimi light machine gun that has been standard since 1982.

Just google the Individual Carbine (IC), Objective Individual Combat Weapon (OICW), or the Advanced Combat Rifle (ACR) programs to see why keeping the legacy infantry arms in production until things work out is a good idea.

Despite past programs such as SPIW, ACR, and OCIW that left the U.S. Army still fielding successive generations of Eugene Stoner’s AR platform at the end of the day, today’s NGSW program could be different. The new Next Generation Squad Weapon program is moving right along and its competitors read like a who’s who of modern rifle, ammo, and optics makers.

Names like Beretta, Heckler & Koch, Leupold, Sig Sauer, Vortex, and Olin-Winchester are enumerated among the current vendors of what could end up as the most revolutionary small arms award of the 21st Century thus far.