Warship Wednesday, Feb. 12, 2020: That time one of the Kaiser’s U-Boats Went to Memphis

Posted on February 12, 2020 by laststandonzombieisland 2 comments

Here at LSOZI, we are going to take off every Wednesday for a look at the old steam/diesel navies of the 1833-1946 time period and will profile a different ship each week. These ships have a life, a tale all their own, which sometimes takes them to the strangest places. – Christopher Eger

Warship Wednesday, Feb. 12, 2020: That time one of the Kaiser’s U-Boats Went to Memphis

Official U.S. Navy Photograph, from the collections of the Naval History and Heritage Command. Catalog NH 42484

Here we see the German UB-III class coastal submarine, SM UB-88, photographed in New York Harbor after she passed the Statue of Liberty in the distance, on 27 April 1919, just after she arrived from Harwich. As you note by the U.S. ensign, she is under new management despite the Maltese crosses on her sail.

Built by AG Vulcan of Hamburg, UB-88 (Yard Werk 104) was commissioned on 26 January 1918, one of the 200~ planned unterseeboots of her class. For 3.6M marks each, the UB-III class were not large submarines, just 182-feet long and displacing 640-tons of seawater when submerged. However, they carried a decent-sized deck gun (105mm) and carried five torpedo tubes (four forward, one stern) with one brace of 19.7-inch steel fish loaded and another in reserve. Importantly, due to their economical MAN-Vulcan diesels and Siemens electric motors, they had a range of about 7,000nm– long enough to sortie from captured Belgian ports almost all the way across the Atlantic and back.

The class did a lot of damage, chalking up something like 500 Allied (and neutral) merchant and warships (including the RN battleship HMS Britannia) in the last two years of the war, bigger numbers when you realize that, of the 200 UB-IIIs ordered, only 96 (SM UB-48 through UB-155) were completed before Armistice Day, and about 80 or so of those actually became operational.

Speaking of which, UB-88 was assigned to the Flanders flotilla with her wartime skipper, Kapitänleutnant Reinhard von Rabenau, helming her to take 14 ships, a mix of small British, American, Swedish and Norwegian steamers, (see the list here) for a total of 31,076 tons. Von Rabenau picked up two Iron Crosses during the war as well as the Hohenzollernscher Hausorden— the decoration just under the Blue Max.

The UB-IIIs also took a lot of damage in 1917-18, and by the end of the conflict, at least 45 sank, were missing, or were scuttled in the last days of the war. The remaining 50 hulls were surrendered to the Allies between November 1918 and March 1919 per the requirements of the Armistice. In all, some 176 surrendered German U-boats, many in poor material condition, were gathered under the watchful eyes of a combined Allied fleet at Harwich in England.

What became of those 50 (former) UB-III-class German U-boats was varied, as they were split among five flags.

Two German U-Boats were grounded near Falmouth in 1921. The one nearer to the camera is UB 86. Original text: “A most remarkable post-war incident was the washing up on the rocks at Falmouth, England, of two German U-boats. They were cast up but a few feet apart; both had been sunk during the war.” National Archives Photo 208-PR-10K-1, caption via Wikimedia Commons.

The British got the bulk of them (34), and promptly sent them to the breakers after removing their periscopes and deck guns, which were commonly circulated as trophies:

The Americans (stay tuned, this is where our boat comes in) got the never-used UB-148 (many of the latter flight ships never served actively in the Kaiserliche Marine) and the aforementioned UB-88. The U.S. also picked up the larger U-111, U-117, U-140, as well as the smaller UC-97, four boats of other classes, giving the U.S. Navy a six-pack of former Kaiserian subs.

Naval personnel was dispatched from the States early in 1919, and they took over the trophy warships on 23 March 1919. UB-88 was placed in special commission for the voyage across the Atlantic, LCDR Joseph L. Nielson, a battleship sailor who had skippered the early American sub USS H-1 (SS-28) for a year, in command.

UB-88 stood out of Harwich on 3 April– less than two weeks after taking her over– along with USS Bushnell (Submarine Tender No. 2) and three ex-German U-boats: U-117, UC-97, and UB-148. Logically dubbed the “Ex-German Submarine Expeditionary Force,” the group steamed via the Azores and Bermuda to New York, where it arrived on 27 April. Notably, the Americans were the only nation who undertook to sail the German boats home on their own plants. 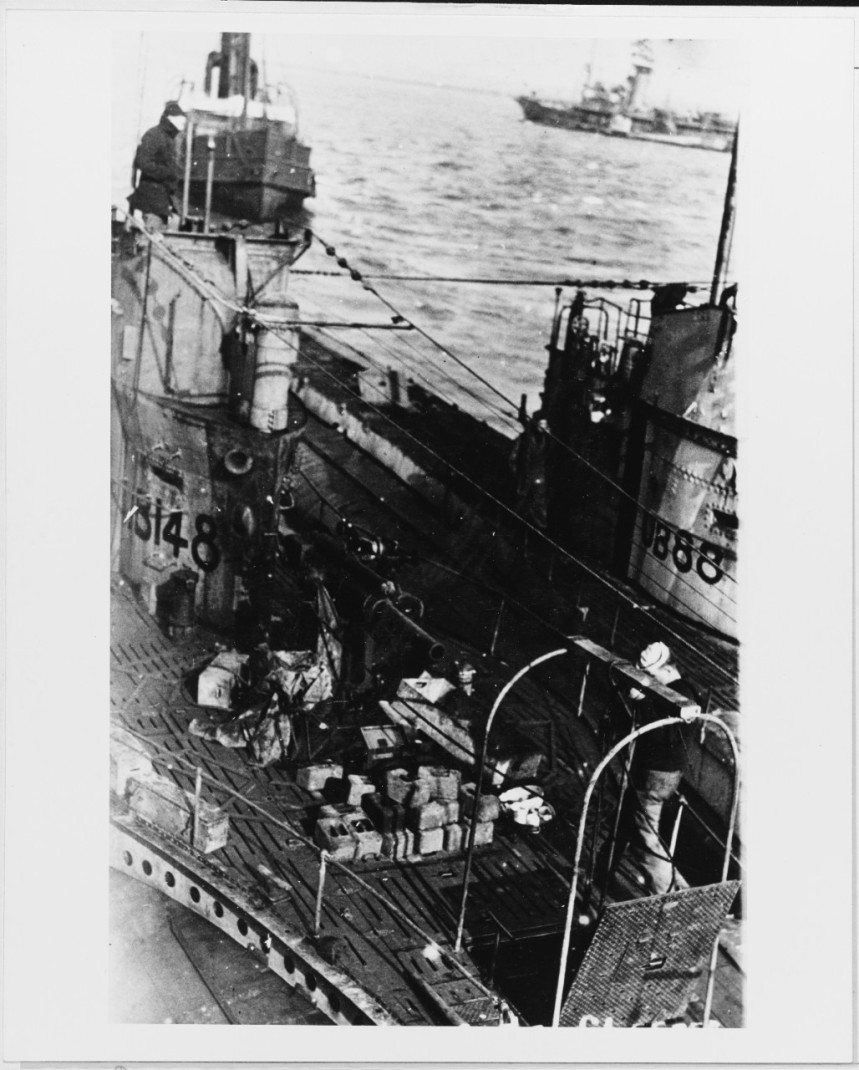 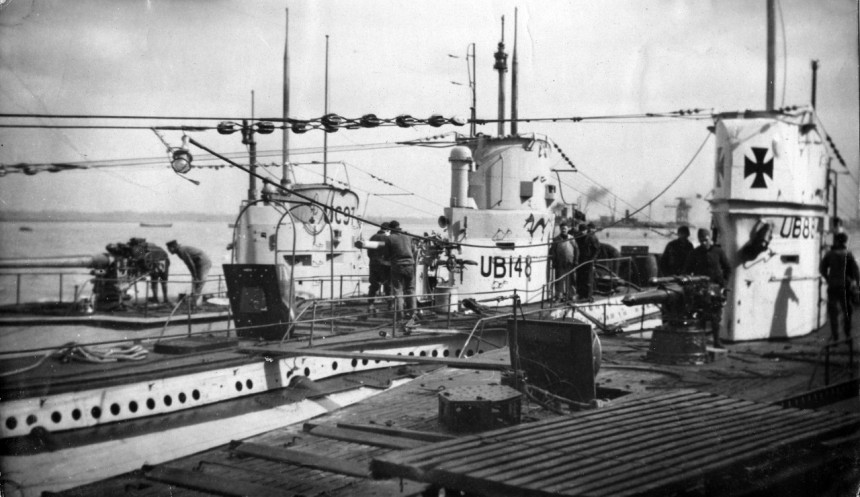 As noted by DANFS, the ships soon became swamped with tourists and were used in Victory Loan drives and in recruitment tools, becoming “center-stage attraction for a horde of tourists, reporters, and photographers, as well as for technicians from the Navy Department, submarine builders, and equipment suppliers.” 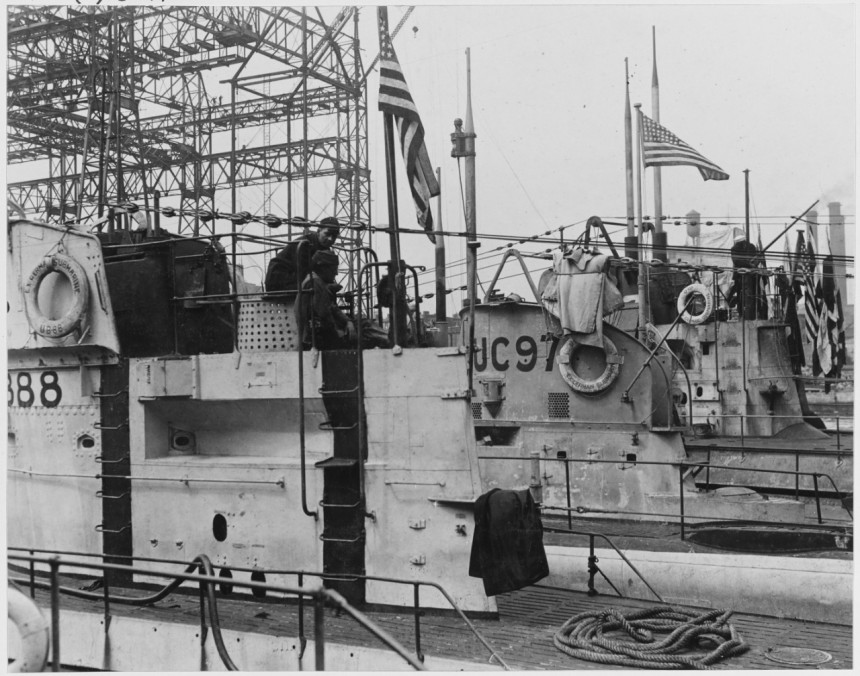 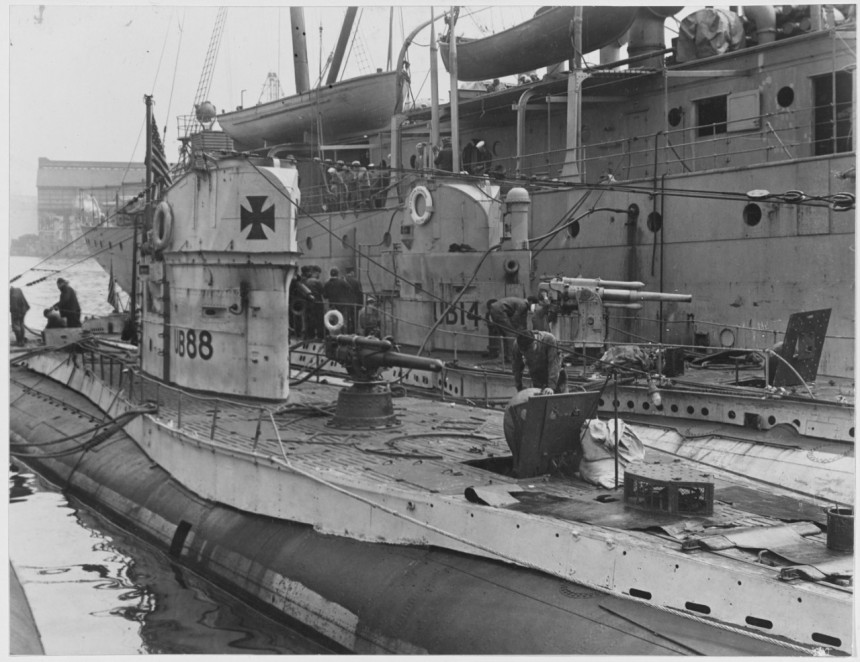 UB-88 at Brooklyn Navy Yard showing saw teeth on bow used to cut nets, damage to the bow, and “magic eye” to ward off evil spirits, 29 April 1919. No details on why she carried the eye, but a couple German gunboats operating in Chinese river waters at Tsingtao had the same practice and even sported dragons on their bows, so it could have been that one of her crew hailed from the Graf Von Spee’s Asiatic Fleet. NH 111085

With U-111 carved off to perform a series of mechanical efficiency experiments against U.S. designs, five of the six the remaining ex-German ships were dispatched to points North and South (the tiny UC-97 even set off for the Great Lakes, where she rests today under Lake Michigan) to gin up dollars and recruits for Uncle Sam.

Exhibitions of war trophies were a common thing in 1918-19. “Thousands of German trophies from the front at the U.S. gov’t war exposition” by Philip Lyford; Illinois Litho. Co., Chicago. LOC LC-USZC4-9887

UB-88 drew the longest itinerary of the five U-boats, assigned to the ports on the east coast south of Savannah, along the Gulf coast; up the Mississippi River as far north as St. Louis, and then on to the West coast.

She departed New York on 5 May escorted by the Coast Guard cutter Tuscarora. She visited Savannah, Jacksonville, Miami, and Key West. After leaving the Keys, boiler issues with Tuscarora forced the cutter to remain there for repairs and the minesweeper USS Bittern became her tender.

From Key West, UB-88 headed for Tampa, then to Pensacola, and on to Mobile and New Orleans, where she entered the Mississippi River. For the next month, she made calls at ports large and small along the great river including Vicksburg and Natchez– ADM Porter’s old Civil War stomping grounds. 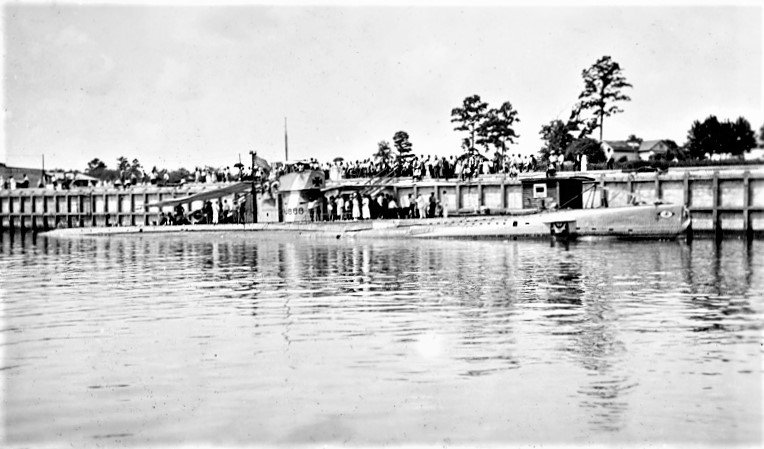 Though originally intended to travel as far north as St. Louis, UB-88 only made it as far as Memphis before low late summer water levels forced her to cut short her voyage on the Mississippi and head back downriver. 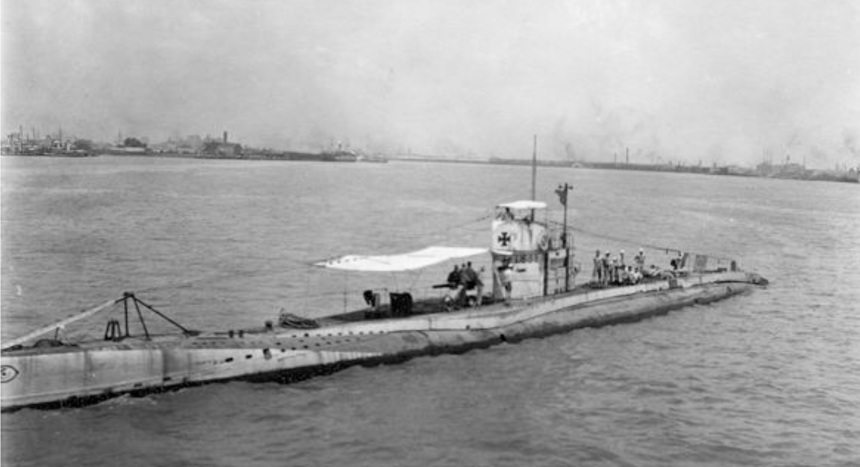 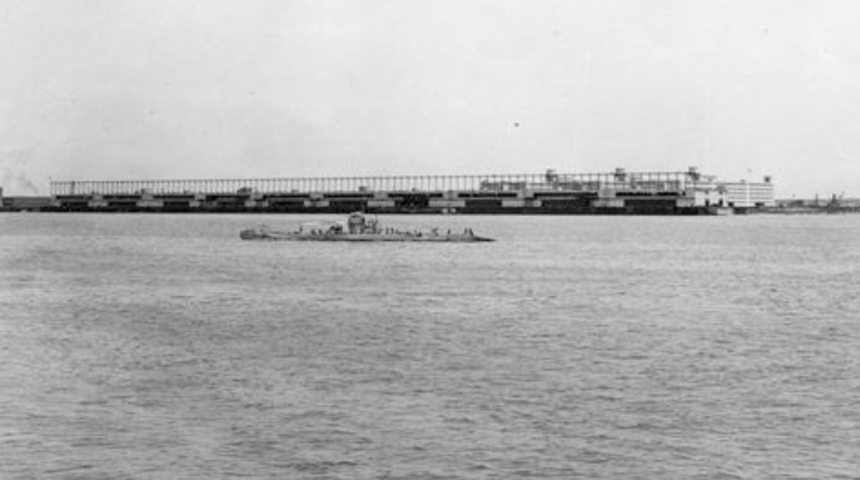 Same as the above, off the Mandeville docks

Chris Dubbs, in his excellent book “America’s U-Boats: Terror Trophies of World War I” covers the trips of these subs and comments “In all, the Mississippi River recruitment cruise of the antisubmarine flotilla was a great success. During its Memphis visit, when it shared the spotlight with UB-88, twenty young men had enlisted in the navy.”

UB-88 returned to New Orleans on 1 July and entered drydock for repairs to her port shaft.

The submarine completed repairs on 22 July and departed the Crescent City to cruise ports along the Texas coast and thence to the Canal Zone. Breaking down between Houston and the Canal Zone, meant that Bittern had to tow the German sub the final 200 miles into Colon.

After receiving repairs, provisions, and visitors, UB-88 crossed through the canal on 12 August. Following a two-day visit to Balboa, she headed north along the Mexican coast to San Diego stopping at Acapulco and Manzanillo along the way.

The last leg of her voyage took the U-boat north to San Pedro, Santa Barbara, Monterey, and San Francisco then to the PacNorthWest to Astoria, Portland, Seattle, Tacoma, and Bremerton. On the return voyage, she stopped at San Francisco only, departing Mare Island on 6 November for the submarine base at San Pedro, where she arrived the next day. 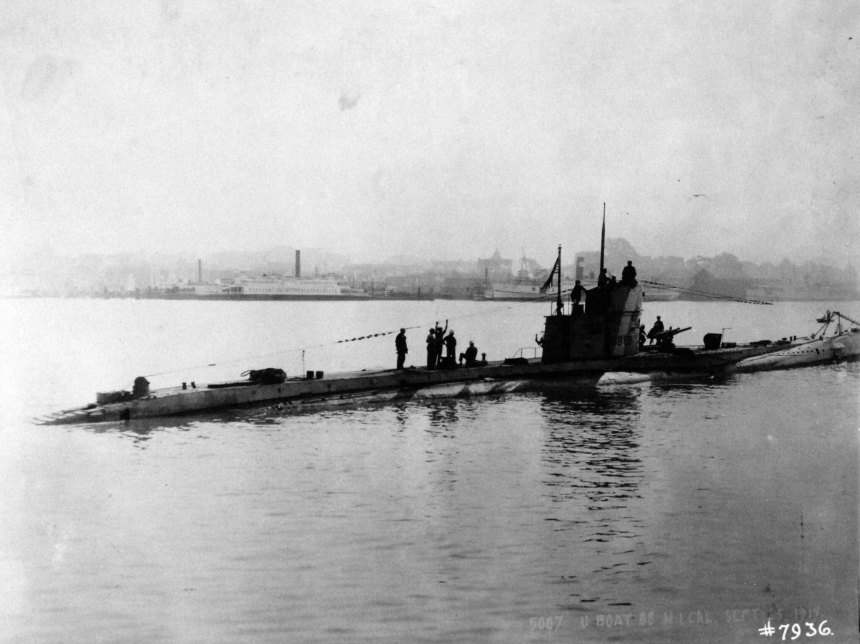 Between November 1919 and August 1920, she was extensively gutted and disassembled in preparation for the end game.

Numerous interior shots of UB-88, likely taken for intelligence purposes while she was being stripped out at San Pedro, are in the Navy’s collection. 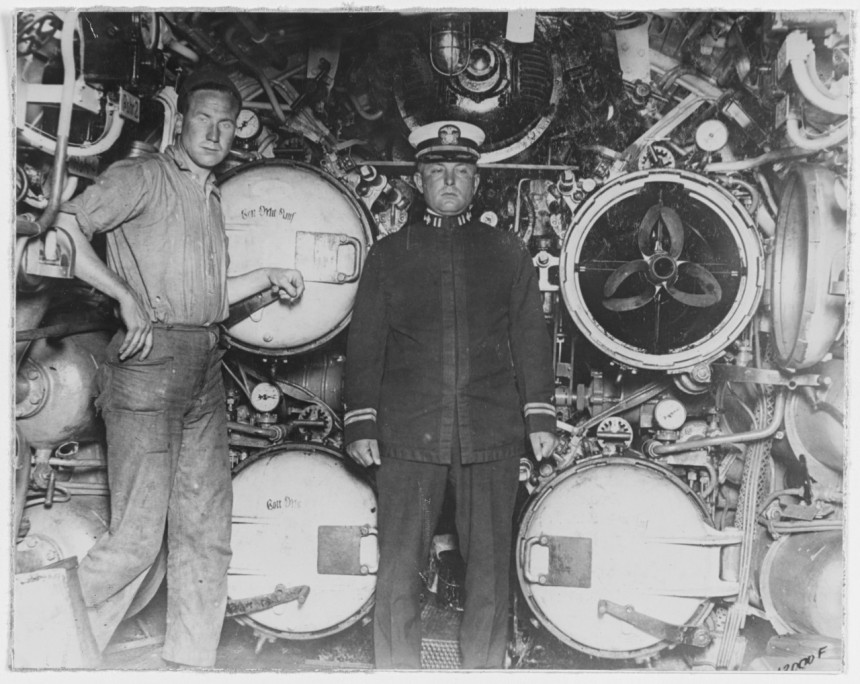 Interior view of the forward torpedo room, looking forward, taken 24 September 1919 while in U.S. Navy service. The four torpedo tubes are 50-CM. (19.7-inch) diameter and each carries the motto “Gott Mit Uns” (God with us) on the breech. Note the open door on the upper right tube with the torpedo tail visible. NH 42487

View of the torpedo room of the former German UB III-class submarine UB 88 in the United States. U.S. Navy National Museum of Naval Aviation photo No. 1986.094.001.028 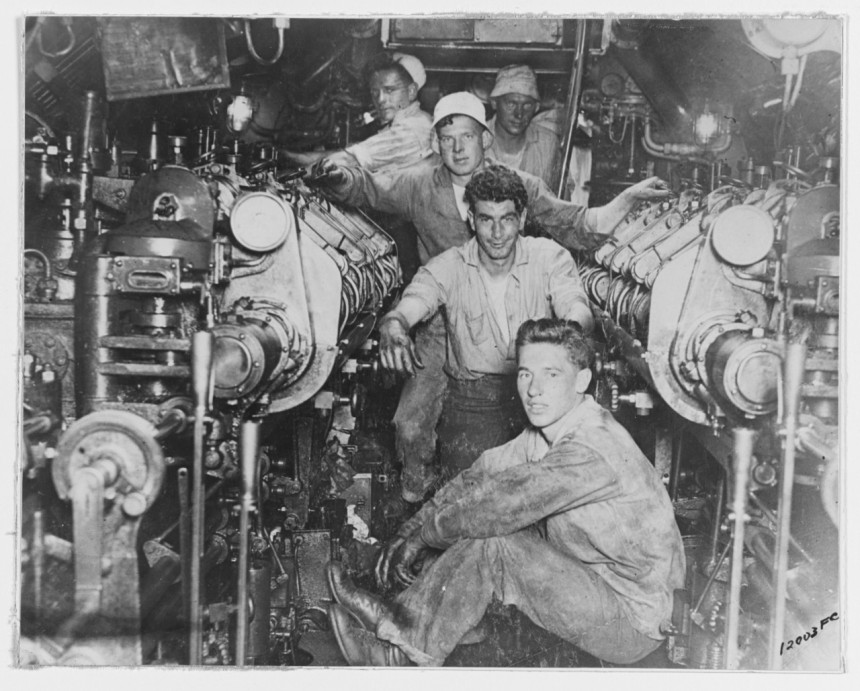 Interior view of the engine room, taken on 24 September 1919 while the vessel was in U.S. Navy service. The ship’s two 6-cylinder, 4-cycle diesel main propulsion engines can be seen here. NH 42488 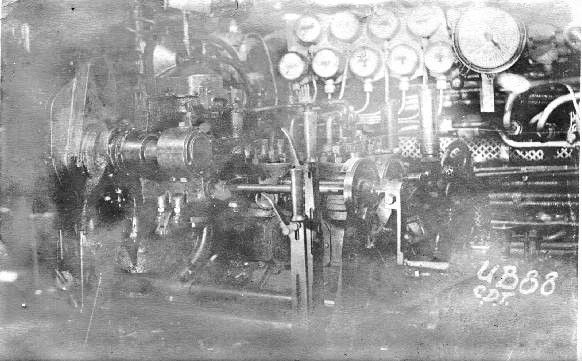 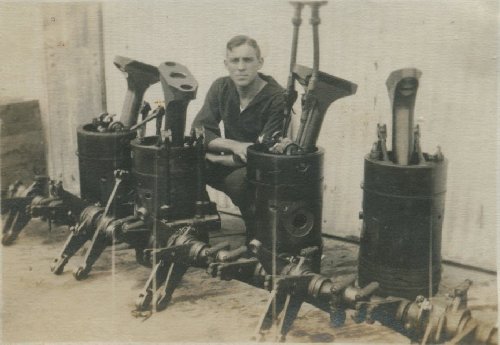 UB-88’s engines were removed for examination before sinking her. Photo via http://pigboats.com/ww1/ub88.html 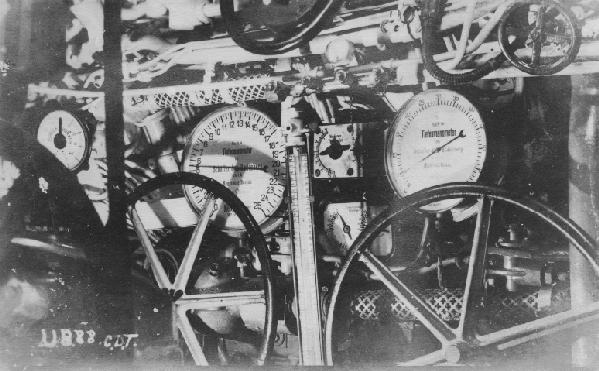 Placed out of commission on 1 November 1920, the former U-boat was towed offshore where she was sunk on 1 March 1921 as a gunnery target for the old four-piper destroyer USS Wilkes (DD-67).

Likewise, sistership UB-148 was sunk as a target by the destroyer USS Sicard (DD-346) off the Virginia Capes while former “Ex-German Submarine Expeditionary Force” mates U-117 and U-140 were similarly dispatched in the same area. U-111, her testing done, was sent to the bottom by USS Falcon (AM-28) on 31 August 1922 via depth charges.

The era of the Kaiser’s U-boats in the U.S. Navy lasted 40 months.

As for UB-88, she was discovered by skin divers off Long Beach in 2003 and has become a popular, albeit rusty, dive site– although over the years most small items of interest have been removed. CarWreckDivers notes that UB-88 still has an unexploded scuttling charge consisting of 25 pounds of TNT, so keep that in mind if visiting. She is also peppered with 4-inch holes from Wilkes.

She is celebrated by the most excellent UB-88 Project “formed from the common desire to be the first to locate and document the only German U-boat off the west coast of the United States” as well as a listing on Pigboats.