In a modern version of Operation Market Time, the storied and long-lasting effort to prevent seaborne infiltration of supplies from North Vietnam into the south, U.S. and allied forces have been stopping guns from getting from rogue states (let us just say, “maybe” Iran) to Yemen, a country that has been enmeshed in a brutal civil war for years. While the USS Jason Dunham (DDG 109) alone picked up 1,000 AKs last year, other countries like Australia and France have picked up their fair share as well. 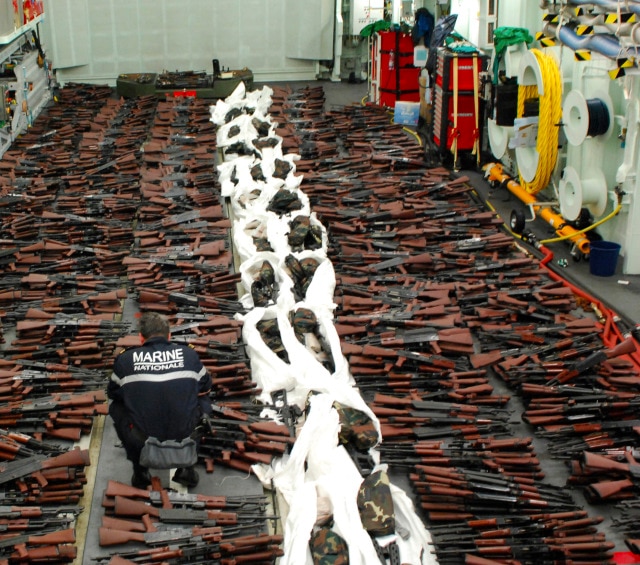 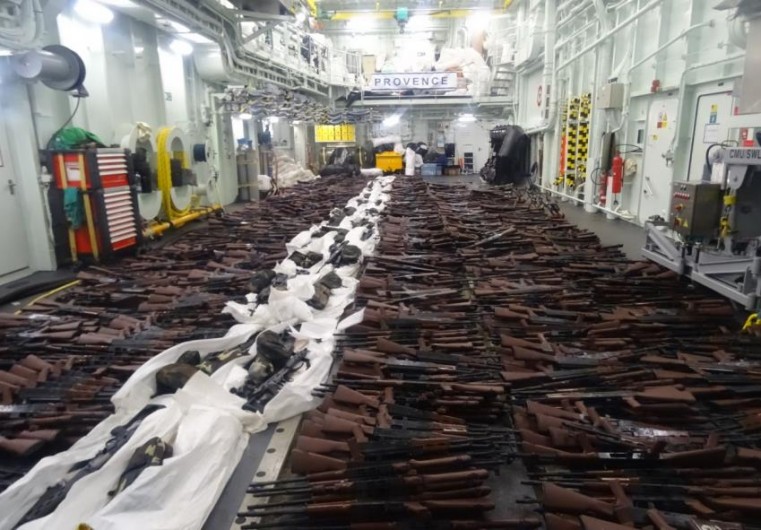 Ever wonder what happens to them?

Well, I guess to the victors goes the spoils of when it comes to spare Kalash, and the French government just recently gifted 1,400 of those same AKs to the Central African Republic (formerly the colony of French Equatorial Africa) in an effort to strengthen the country’s military. 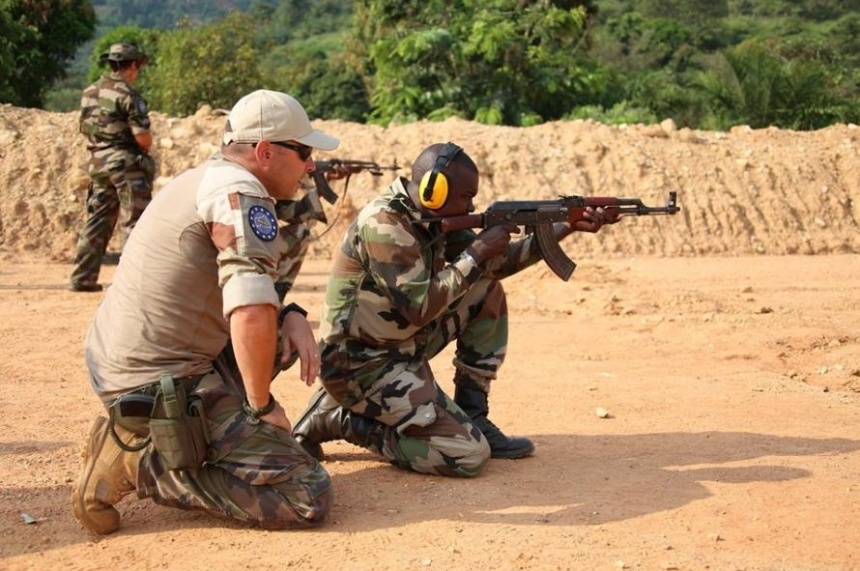 France has long had a thumb in the CARs affairs and has maintained a sizable military force there since 2013, its 7th such deployment since the country gained nominal independence in 1960.

Hauling wheat around Yemen will get you holed

“The assessment at the moment is it was almost certainly non-state Yemen based actors firing a land-based missile or rocket at the vessel,” Major Tom Mobbs, head of intelligence and security with the European Union’s counter-piracy mission EU Navfor, told Reuters. 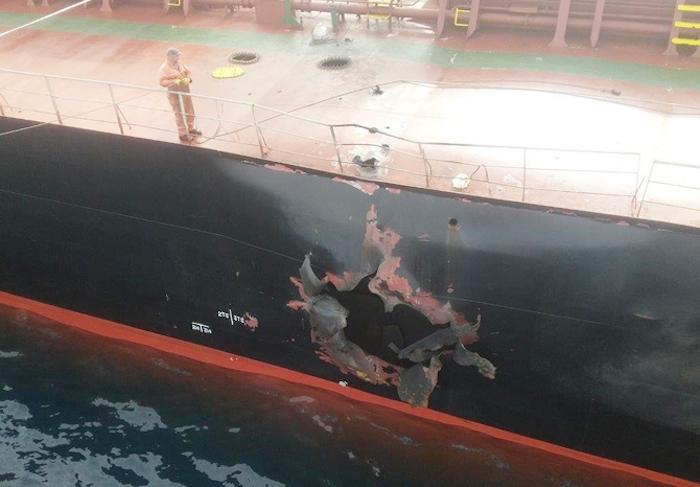 The Turkish flagged Ince Inebolu bulk carrier was damaged by an explosion on May 10, some 70 miles off the Red Sea port of Salif where it was due to deliver a 50,000-tonne cargo of Russian wheat. Likely culprits are the Houthis, who last month hit a Saudi oil tanker was off Yemen’s main port city of Hodeidah, suffering limited damage.

And of course, the Houthis have exchanged fire with both Gulf State and U.S. military vessels several times.

As noted by Defense News:

The Houthi boat that attacked and hit a Saudi frigate Jan. 30 in the Red Sea, reported earlier as a suicide boat, was instead carried out by an unmanned, remote-controlled craft filled with explosives, the US Navy’s top officer in the Mideast said.

“Our assessment is that it was an unmanned, remote-controlled boat of some kind,” Vice Adm. Kevin Donegan, commander of the Bahrain-based US Fifth Fleet and head of US Naval Forces Central Command, told Defense News in an interview here Saturday.

The attack on the frigate Al Madinah appears to be the first confirmed use of the weapon which, Donegan said, represents a wider threat than that posed by suicide boats and shows foreign interests are aiding the Houthis.

Donegin is concerned “first that it is in the hands of someone like the Houthis. That’s not an easy thing to develop. There have been many terrorist groups that have tried to develop that, it’s not something that was just invented by the Houthis. There’s clearly support there coming from others, so that’s problematic.

“The second is the explosive boat piece — you don’t need suicide attackers to do a suicide-like attack. There are certain terrorists that do things and they get martyrs to go and do it. But there are many others that don’t want to martyr themselves in making attacks like that and that’s pretty much where the Houthis are. So it makes that kind of weaponry, which would normally take someone suicidal to use, now able to be used by someone who’s not going to martyr themselves.”

The unmanned boat was likely supplied by Iran, Donegan said.

Sardines and the Houth

One of three Type 021 missile boats purchased by Yemen from China in 1995. Photo via Chinese internet

War Is Boring is reporting that the Houthi rebels in Yemen, which comprise some 20,000-strong mostly derp militiamen, has been taking pop-shots at passing shipping going as far back as last October with Chinese-made C.801 missiles salvaged from a trio of likewise Chinese-made Type 021 fast attack craft (based on the 1960s Soviet Osa-class) that defected to the Houth back in 2014.

As each Type 21 had up to four C.801s (NATO: CSS-N-4 Sardines), which in theory gave the Houthi a cool dozen anti-ship missiles. This means, barring resupply from countries that rhyme with “ShIran” they may be running low on things to sling at ships in their littoral larger than RPGs. In recent weeks, one has been fired (successfully) at HSV Swift, and as many as six in three attacks with much less luck at USS Mason.

The first attacks was reported on Oct. 8, 2015 — around a week after a combined force of Emirati, Bahraini and Qatari troops forced the Yemenis to withdraw to the port of Mocha, 40 kilometers north of the strategically important Bab Al Mandab Strait, which connects the Red Sea, and thus the Suez Canal, with the Indian Ocean.

According to official reports from the Yemeni capital Sana’a, which is now under Houthi control, this attack “destroyed” the Saudi navy tanker Yunbou. Two nights later, the pro-Houthi Yemenis struck again, this time reportedly targeting either the Saudi navy tanker Boraida or an Egyptian navy warship the Houthis identified as Al Mahrousa.

In truth, neither Boraida nor Yunbou was even damaged, while Al Mahrousa is a 150-year-old presidential yacht that has certainly never ventured anywhere near Yemen in years.

Posted on October 13, 2016 by laststandonzombieisland 2 comments 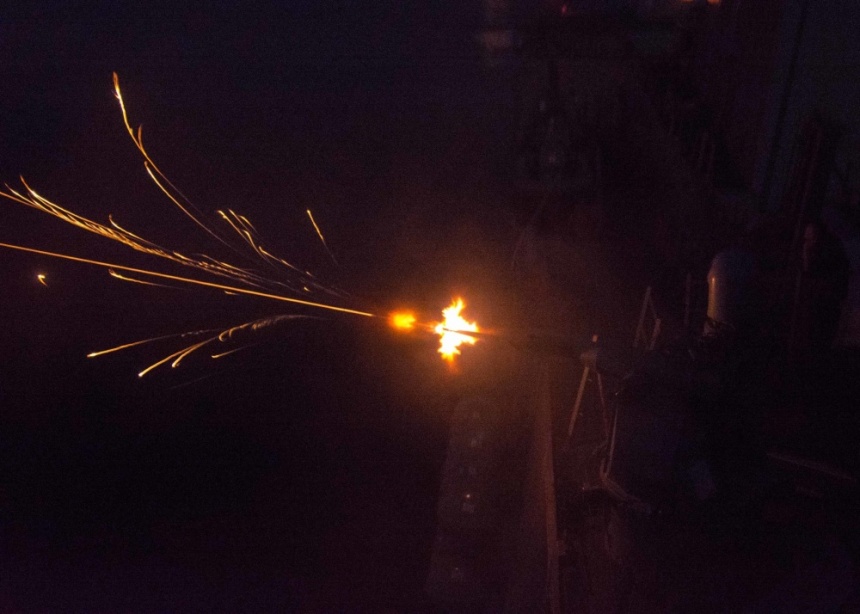 In the latest escalation in the saga of ongoing asymmetric warfare by proxy in the Middle East region that has been on a low simmer since 1979 between the U.S. and Iran with brief periods of boiling, the Arleigh Burke-class guided missile destroyer USS Mason (DDG-87) let slip the dogs of war in the form of two Standard Missile-2s (SM-2s) and a single Enhanced Sea Sparrow Missile (ESSM)– aimed at a pair of suspected cruise missiles fired from the Yemini shore.

Mason, deployed as part of the Eisenhower Carrier Strike Group, along with another destroyer and the hybrid afloat base USS Ponce (AFSB(I)-15) have been in international waters near the strait of Bab el-Mandeb this week following the sucker punch of the unarmed and civilian-manned HSV Swift last weekend.

As reported by USNI News, it would be the first time that SM-2 was used against an enemy missile and the first time ESSM has been used in warfare at all.

Then came a second report of a failed launch against Mason Tuesday in which the destroyer used soft-kill defensive countermeasures to defeat the incoming vampire(s).

Pentagon spokesman Capt. Jeff Davis said the U.S. “will take action accordingly,” in response to the findings of the ongoing investigation.

The following is a statement released today by Pentagon Press Secretary Peter Cook on U.S. military strikes against radar sites in Yemen:

“Early this morning local time, the U.S. military struck three radar sites in Houthi-controlled territory on Yemen’s Red Sea coast. Initial assessments show the sites were destroyed. The strikes — authorized by President Obama at the recommendation of Secretary of Defense Ash Carter and Chairman of the Joint Chiefs General Joseph Dunford — targeted radar sites involved in the recent missile launches threatening USS Mason and other vessels operating in international waters in the Red Sea and the Bab al-Mandeb. These limited self-defense strikes were conducted to protect our personnel, our ships, and our freedom of navigation in this important maritime passageway. The United States will respond to any further threat to our ships and commercial traffic, as appropriate, and will continue to maintain our freedom of navigation in the Red Sea, the Bab al-Mandeb, and elsewhere around the world.”

The guided missile destroyer USS Nitze (DDG 94) launches a strike against three coastal radar sites in Houthi-controlled territory on Yemen’s Red Sea coast. Due to hostile acts, continuing and imminent threat of force, and multiple threats to vessels in the Bab-al Mandeb Strait, including U.S. naval vessels, Nitze struck the sites, which were used to attack U.S. ships operating in international waters, threatening freedom of navigation. Nitze is deployed to the 5th Fleet area of operations to support maritime security operations and theater security cooperation efforts:

The reports of Swift’s death have been greatly exaggerated

Posted on October 6, 2016 by laststandonzombieisland 4 comments

Over the weekend news and video surfaced that the former HSV Swift, which had been leased to MSC for 10 years from 2003-2013 and is currently owned by Emirates-based UAE Marine Dredging Company but was chartered by the United Arab Emirates military for coastal transport, was sunk after a missile attack by Houthis rebels.

Well, it turns out that the ship was able to make it to port and all of her 24 (mostly Indian and Ukrainian) civilian mariners are safe. But she is likely headed for the scrappers after being hellah banged up as reported by The Drive. 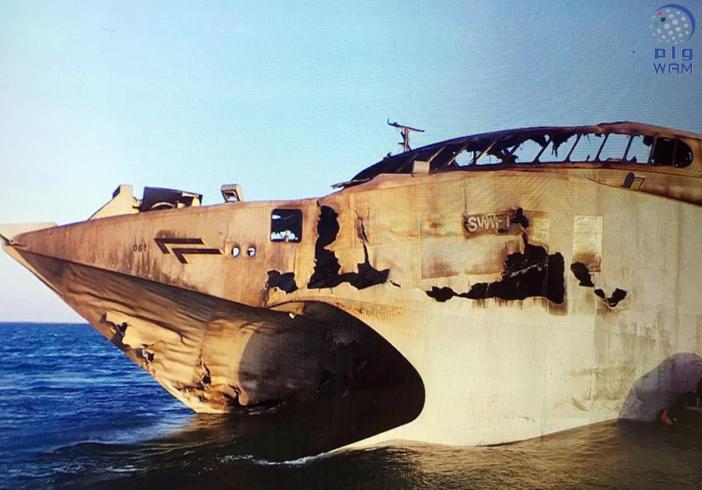 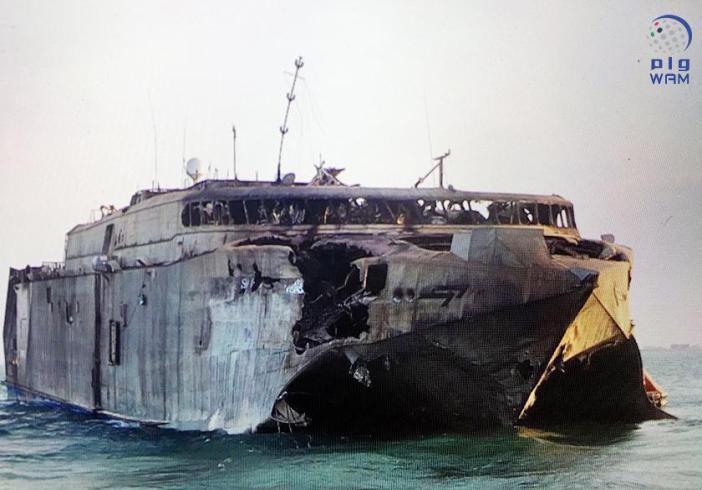 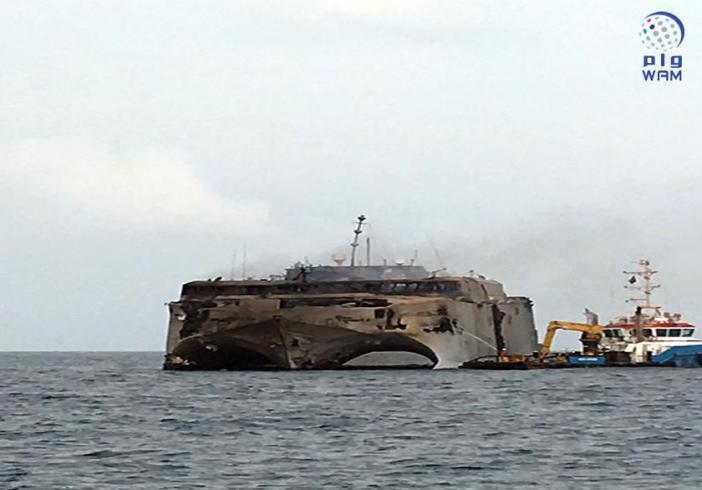 Reports now indicate the weapons used could have been Chinese-built C-802 anti-ship missiles (NATO reporting name CSS-N-8 Saccade) or guided anti-tank weapons. I can see that. After all, one has to remember what happened to the aluminum-superstructure of the Argentine corvette ARA Guerrico at the hands of a force of Royal Marines on South Georgia who had a few simple 84mm rockets and small arms back in 1982.

In other news, the Saudis are holding a big naval drill, Gulf Shield 1, and Iran is suggesting the kingdom’s deputy crown prince is so “impatient” he may kill his own father to take the throne. Oh, Iran…

Looking to arm a brigade of insurgents on the cheap? 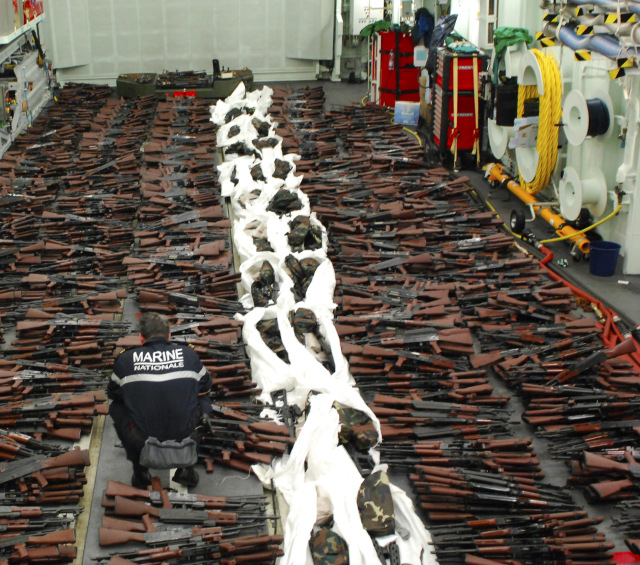 It was determined that the munitions originated in Iran and were likely bound for Houthi insurgents in Yemen, where U.S. allies Saudi Arabia and Kuwait are leading an 11-nation coalition against the Houthi, which are supported by Iran and Hezbollah.

More photos and details in my column at Guns.com