The Abandoned Destroyer Class : Curse of the Spruances

Posted on November 10, 2013 by laststandonzombieisland 204 comments

Back in the early 1970s, the US Navy needed a replacement for the old FRAM’d WWII era Sumner and Gearing leftovers from the 1940s and 50s in the fleet. These were small, 3500-4000 ton ships that carried an 8-cell ASROC launcher, 4 5-inch/58 guns in twin mounts, and two triple Mk32 ASW torpedo launchers. They were sitting ducks to anti-ship missiles, could not carry helicopters, and packed almost 400 sailors into a tin can made to all the best specs of 1942. 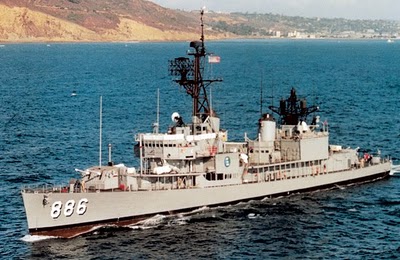 The USS Orleck, shown here in 1964, a WWII veteran still going strong, by the 1970s needed to be replaced. Ironically, while all of the Spruances are gone, Orleck endures as a floating museum ship in Lake Charles, La. and is slated to go to Jacksonville in the coming months

To replace these old boats, the Spruance class, a mighty 31 destroyers, were built between 1972-1983, all at Ingalls Shipbuilding in Pascagoula. 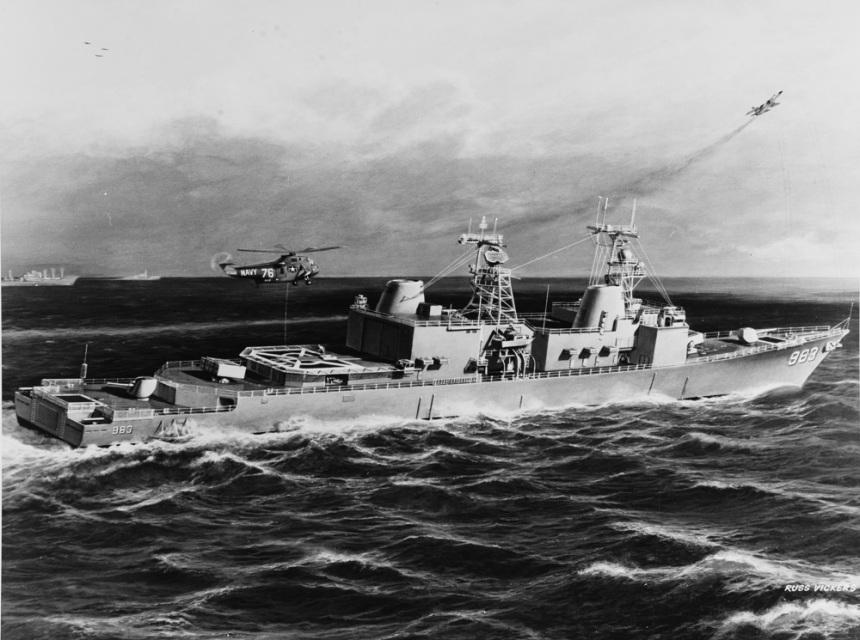 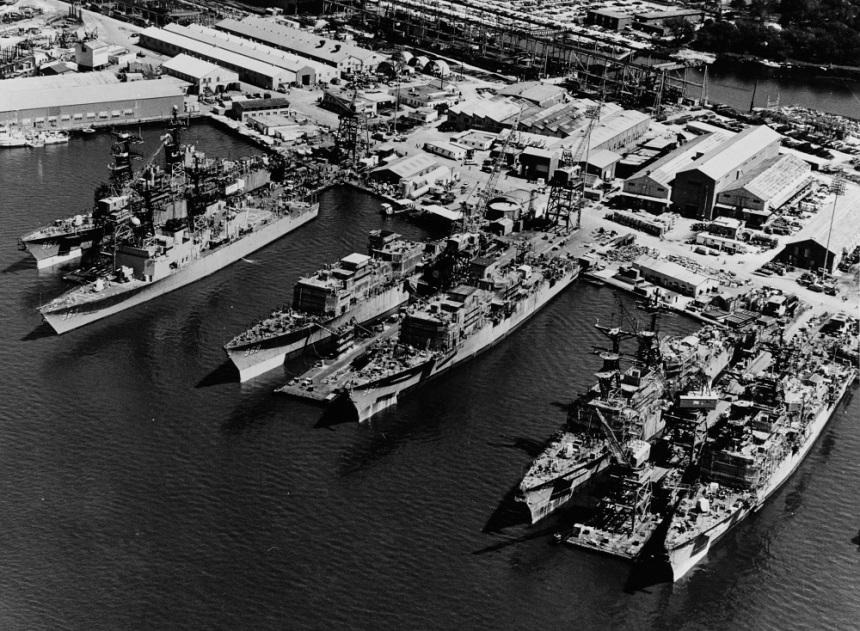 At least five Spruance-class destroyers being built by the Ingalls Shipbuilding Division of Litton Industries at Pascagoula, Mississippi, with the two closest being USS Conolly (DD-979) and USS Moosbrugger (DD-980), 25 May 1977 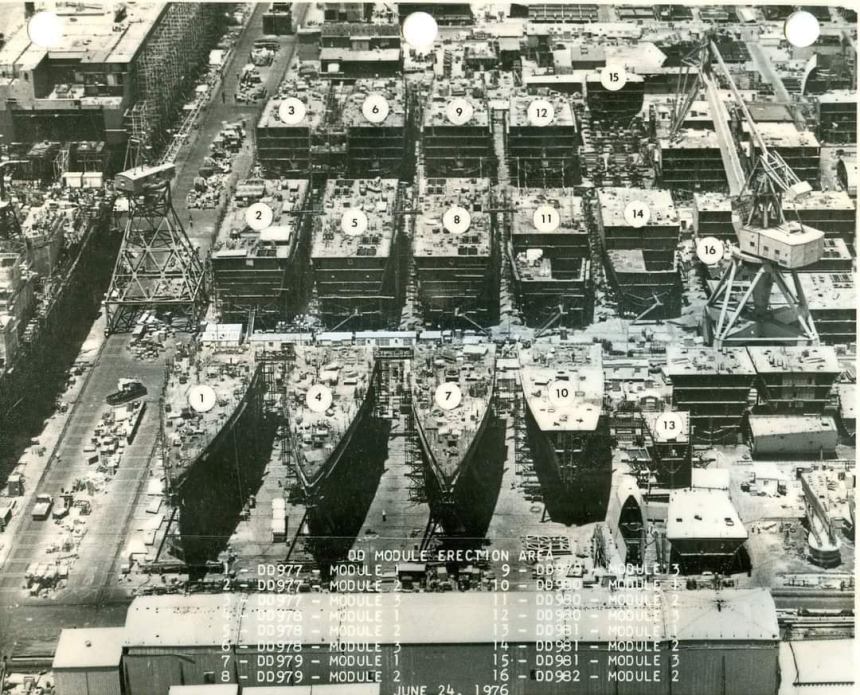 As a kid, I used to sit at the old Point on Beach Boulevard and watch these sleek 563-foot long greyhounds birthed for Poseidon’s fox hunts.

The USS Ingersoll, DD-990 was a good example of how the “Spru-cans” came out of Pascagoula in the 1980s. She is armed here with just her guns, torpedoes, ASROC, and a Sea Sparrow launcher. Bring on the Red Banner Fleet!

They were called the “Love Boats” back then since they were the size of WWII light cruisers (8000-tons), yet only carried a pair of 5-inch guns (Mk45 rapid-fire jobs that provided more firepower than twice as many of the old Sumner‘s 5-inch/58s), twin triple ASW tubes, and an 8-cell ASROC launcher. 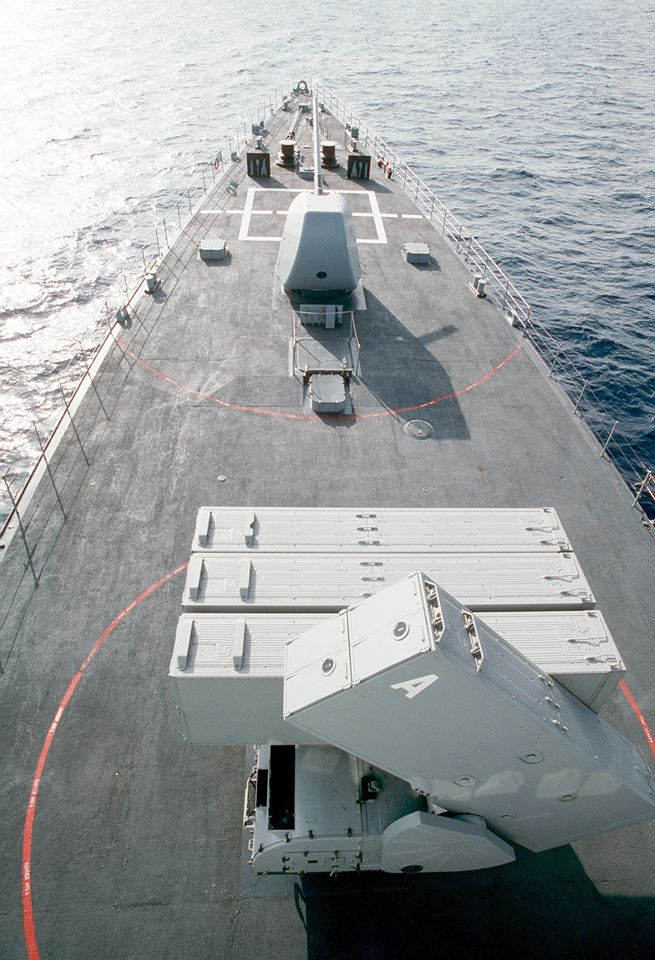 Still, they made a good backdrop for 1984 recruiting commercials– set in British-controlled Hong Kong!

In their defense, most were funded by the bankrupt Carter military and their armament suite was superior to the destroyers they were supposed to replace. Also, they had a twin helicopter hangar that could support a pair of sub-busting choppers, a battle implement WWII destroyers never dreamed of.

This changed over time and by the late 1980s, they were pretty capable ships

Over the 1980s and 90s, they were increasingly armed with other weapons systems. Some 24 ships of the class swapped out their ASROC launcher for a 61-cell Mk41 VLS system like on the Ticonderoga class cruisers (which were based on the Spruance hull). All ships also gained an 8-pack of Harpoon SSMs, an 8-cell NATO Sea Sparrow SAM launcher (also capable of being used against surface ships), and a pair of 20mm CIWS R2D2 guns for swatting away incoming missiles. Ten more of these had a 21 cell RIM-116 Rolling Airframe Missile launcher mounted on the starboard fantail to further protect these ships from more modern anti-ship missiles. Several of those that weren’t converted to VLS were given quadruple ABL Mark 43 Tomahawk missile launchers like on the recommissioned Iowa class battleships.

USS Deyo after her ASROC was removed and replaced with the 61-cell VLS. Also, note the Phalanx CIWS mounts port and starboard.

They proved the backbone of fleet operations throughout the last decade of the Cold War, the sordid engagements in the Persian Gulf, and the Navy’s part in the war on drugs.

Speaking of carriers, there was even some thought to making an “aviation destroyer” variant. 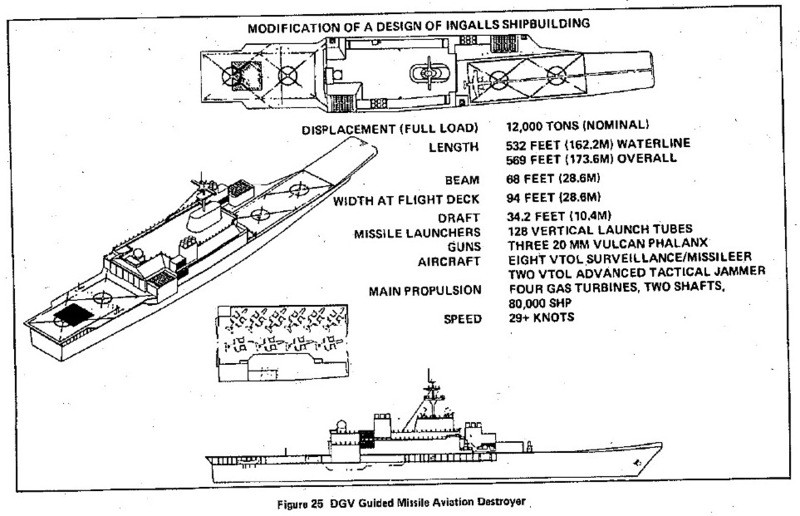 Their long legs (6000+ nm at 20 knots on two turbines), allowed them to self-deploy away from the battle group and a lot of the flag-waving done in foreign ports during the Regan-Bush-Clinton years was done by Spruances operating alone. Gone were the days of boilers and steam plants. 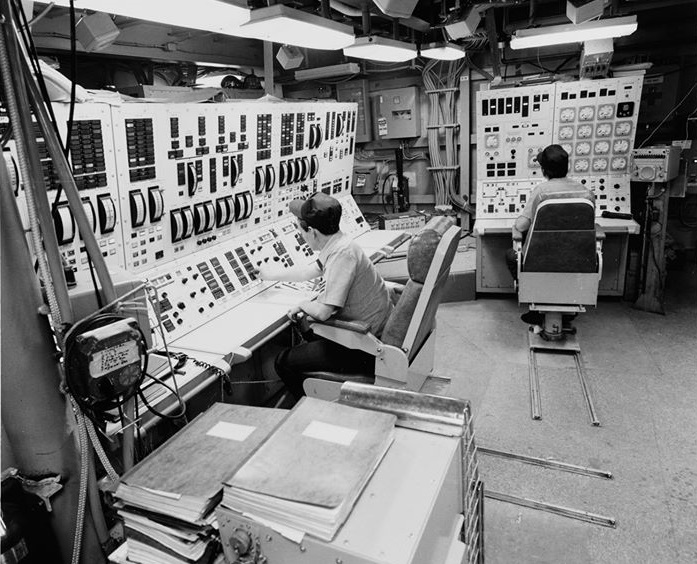 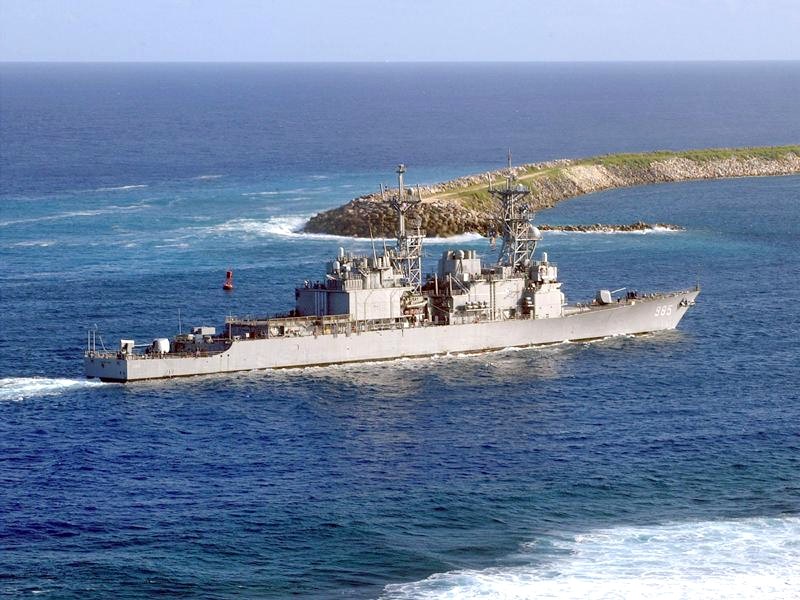 USS Cushing late in her career. Note the RAM missile launcher on her stern.

Then, starting in 1998, these hardy destroyers that were at the top of their game, began to retire.

When the Spruance‘s left the Navy, they took with them 1,494 Mk41 VLS cells which carried mainly Tomahawk cruise missiles along with a smattering of ASROC sub-busters. They also faded away with 62 5-inch guns, 62 CIWS guns, 249 Harpoon anti-ship missile launch spots, 62 LAMPS helicopter hangar spots, 249 Sea Sparrow missile launcher cells, 210 RAM missile cells, and 186 Mk32 ASW Torpedo tubes. Those 7 hulls that were not equipped with VLS retained their ASROC launchers which gave the fleet another 56 of those weapons.

Today they have in commission: 22 remaining Ticos, 12 OHPs (that are largely disarmed and rapidly retiring), 4 (unproven) LCS’s,  and 62 Burke-class destroyers, the first of which was laid down on 16 September 1989. That’s an even 100-ships, or a reduction by about 58% from the late 1980s. Granted, the US Navy doesn’t have to go to war with the Soviets anymore ala-Red Storm Rising, but there is still a global need for surface combatants from the South China Sea to the HOA to the Med and the Persian Gulf.  A hundred surface ships can’t be everywhere at once.

You can argue that the 96-cell VLS equipped DDG-51 class destroyers replaced the Spru-cans, DDGs, and retired CGs on a 2:3 basis, but the DDG-51 lacked the extra 5-inch mount, and, in early models, the aircraft capability.   Instead of being crammed full of TLAMs, these new DDGs have to allocate most of their space to carrying surface to air missiles. Further, the ’51s are tasked increasingly with fleet air defense and (now) with ABM missions. All the while their ASW, ASuW, and NGFS capability are being marginalized. Yes, the 51’s replaced the Spurances and the 1970s vintage CGNs of the South Carolina and Virginia-class in so much as AAW is concerned, but they did not fully replace their capability in ASW and NGFS. The Spruances, unlike the Burkes, was dedicated to ASW, ASuW, and land strike with both naval gunfire and cruise missiles.  With the Burkes, its a side-job. 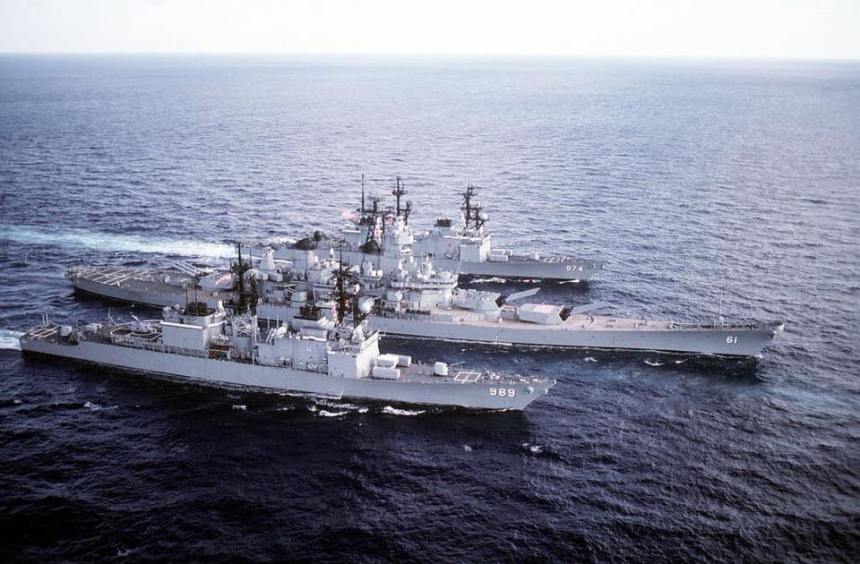 Surely the Spurances would now be long in the teeth, ranging from the 1975-commissioned DD-963 to the 1983-dated DD-997, they would all be over thirty years old. However, the Ticonderoga-class cruisers are roughly the same age. In fact, they use the same hull and below-deck machinery. In 2003, the newer 22 of the 27 ships  (CG-52 to CG-73) in that class were upgraded to keep them combat-relevant, giving the ships a service life of at least 35 years each. Had a similar mechanical upgrade been given to the 24-VLS equipped Spurances, they would all still be in service. In fact, given that timeline, DD-997 would only be expected to decommission in 2018. More on this ship below.

Instead, all 31 Spruances were rapidly decommissioned and mothballed between 1998 and 2005, when the ships were all in their 20’s. Instead of being refurbed to serve another decade or two, they were stricken from the Navy List. No sooner were they stricken than they were systematically sunk in a series of fleet training exercises, dismantled, or otherwise scrapped. 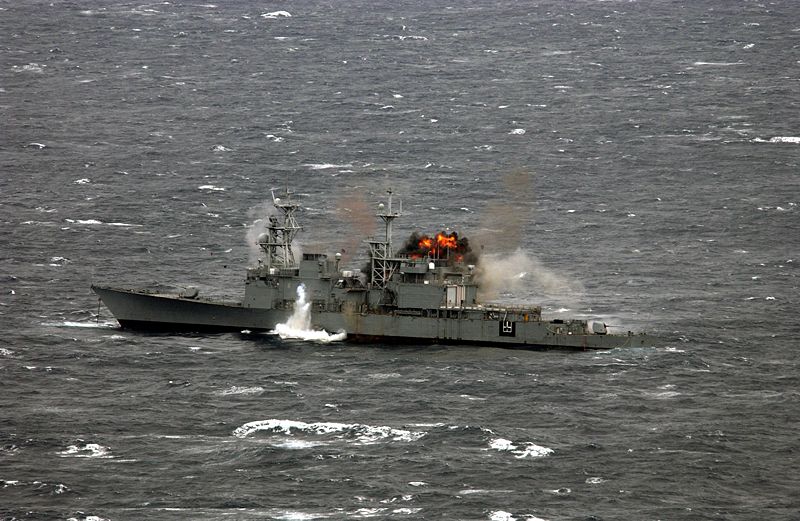 Like Megatron and Osama Bin Laden, most of the Spruances were sunk in deep water. Here the USS Hayler, DD-997, commissioned in 1983, is being sunk as a target on 13 November 2004. Most 21-year old ships are still in service, with another 10-15 years left on their hulls. Her story is typical of her class. Not even her 127mm guns, standard issue on US Navy destroyers, were salvaged. 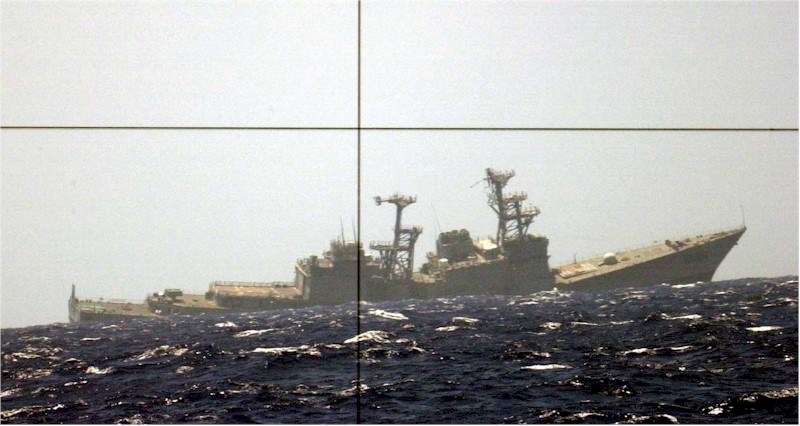 It can be guessed that since they were too close in design to the still very active Tico class cruisers, they were too sensitive to give away as military aid to the likes of Pakistan, Mexico, or Colombia. Just one of their number, the former USS Paul Foster, remains. She has been in use since 2004 as an unnamed and non-commissioned test ship for the US Navy as the Self Defense Test Ship (SDTS). In this role, she is a remote control drone boat, used as a hard target for new weapons systems.

And so goes another wasted opportunity.