Here at LSOZI, we are going to take out every Wednesday for a look at the old steam/diesel navies of the 1859-1946 time

period and will profile a different ship each week.

Here we see the four-masted barque rigged clipper ship Tovarish (also spelled Tovarisch, and Товарищ meaning “comrade”), the pride and joy of the Pre-WWII Soviet Red Banner Fleet, Military Maritime Fleet of the USSR in full sail. She served under no less than four flags and fought in three wars– often on both sides.

Launched at the Irish based shipyard of Workman, Clark & Co., Belfast, for Galbraith & Moorhead, London and delivered in December 1892, her original name was the clipper Lauriston. She was a four-master windjammer built for blue-water cross-ocean trading service. There was nothing about her that was modern even at the time of her birth. She had no electric lights, no engine of any sort, no mechanical ventilation, no refrigeration, bathing facilities, watertight bulkheads, or water distillation devices. There was a single steam boiler, but it was just for powering the cargo boom to load and unload her four holds. She was one of the last of the old-school clipper ships. Her crew did everything manually from turning captains, to heaving anchors. Their only comfort was salted pork and stored water. Their only light was by the flicker of kerosene wicks.  While the ship would sail for over fifty years, this was never improved upon.

Nevertheless, what she lacked in comfort she made up for in speed, without any coal or oil to store, freed up most of her belowdeck areas for cargo. She raced the oceans from one continent to another for twenty years. She completed the Liverpool – Rangoon run in just 95 days once and the Holyhead – Calcutta one in 96. When it was considered that these trips normally took even steam-assisted ships 107 and 116 days respectively, you can see just how fast the ship was. This shouldn’t surprise you when you realize that her sail plan was for nearly 10,000-square feet of canvas aloft on 30 sheets.

She hauled silks, sheep, dry goods, jute, teak wood, wool, and just about anything else that paid. First for Galbraight, then after 1905 for G. Duncan & Co, then after 1910 for Cook & Dundas, London (sold for £ 4,000), and finally to Cherey, Eggar & Forrester of  London in 1913. It was Eggar (no relation) who sold the ship to an agent of the Tsar in 1914 to work the convoy route from Aberdeen to Murmansk during World War One, carrying railroad ties and equipment. A large quantity of the Murmansk-St Petersburg Railway, which was completed in 1917, came from the UK on the Russian-owned, Finnish/British-crewed His Russian Majesty’s Ship Lauriston. After the line was finished, she became a coal lighter/mothership for the flotilla of Russian navy minesweepers there. (She would be used for this in another war too, but more on that later.) 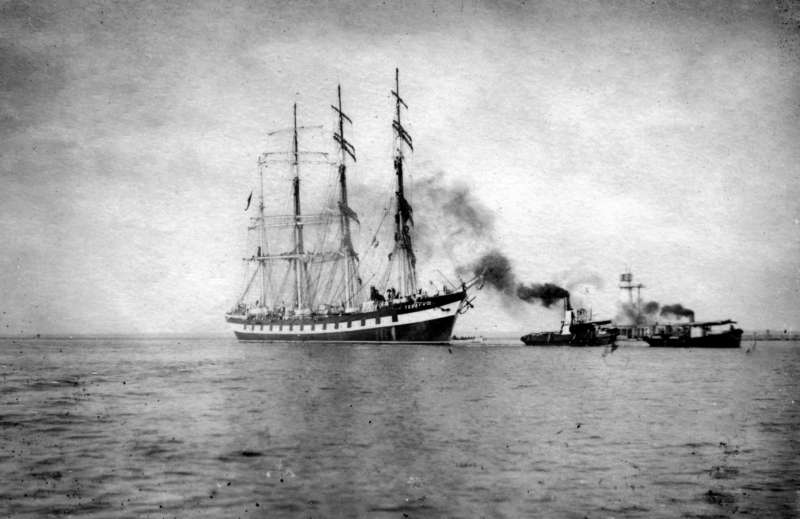 When the Tsar was kicked out in 1917 and the now-Soviet Russians sued for peace in March 1918, the Brits accompanied by other allied forced (including US dough boys) seized Murmansk. It was then the Lauriston was seized by the Brits and placed at the disposal of the Hudson Bay Co. , London, moving cargo back and forth from the UK to Murmansk as needed and serving as  a floating base of operations for these “Interventionist” forces in the Russian Civil War. When the Brits evacuated Murmansk to the Soviets in 1920, they towed the Lauriston back with them of course. I mean, she may have been a 28-year old scratch and dent windjammer from another era, but she was free, right? 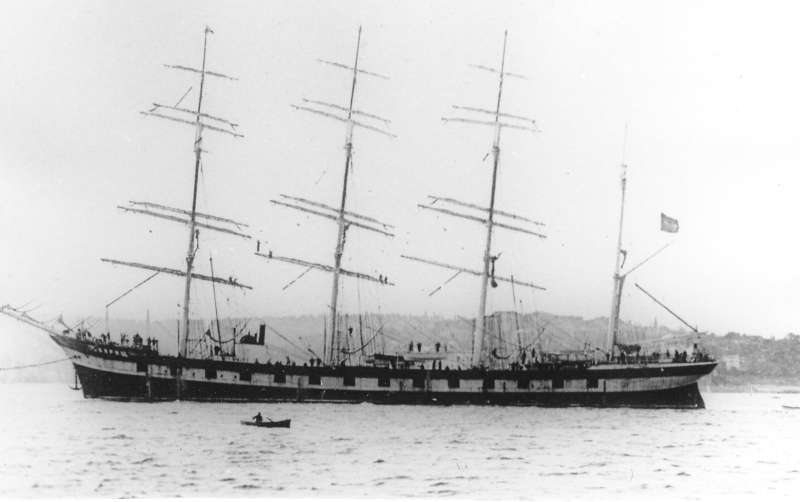 Well, not quite. It seems the Soviets believed that what the Tsar once owned, the State now did and by 1921 they had pitched enough of a fit to get her back. After having a refit for her (new sails, rigging, etc) at bargain prices in Germany, she was renamed Tovarish (Comrade) in 1923 and made a training ship for the Soviet navy and merchant marine, officially assigned to the Leningrad Maritime College. In her new service she had a 32-man crew of professional officers and NCOs who oversaw 120 cadets. 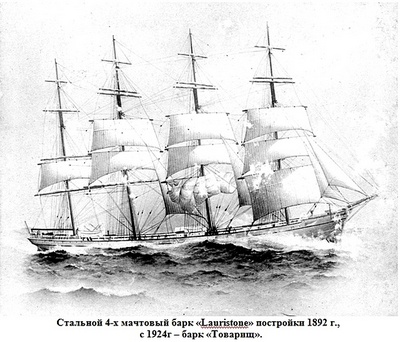 Moreover, she was one of the first operational Soviet-flagged merchant ships. This meant she could move across Europe in the 1920s, bringing back to the Soviet Union much-needed flour (the country was beset by famine throughout the 20s). It was also theorized that she dropped of Soviet agents, and picked up Communist political prisoners. In one mission six Communist party members in Estonia were quietly bundled out to the Tovarish and away from local authorities, escaping a death sentence passed upon them.

She was the first Soviet-flag ship to enter and receive honors in many foreign ports from Europe to the Americas. For instance she completed a run from Leningrad to Rosario, Argentina in 1926 in just 74 days by sail alone. Although with no watertight bulkheads and a riveted iron-hull, she was very strong. So much so that in a collision in the English Channel in 1928 with the Italian cargo ship “Alcantara“, it was the newer Italian steamer that went to the bottom while the Tovarish picked up survivors. Two years later an English Admiralty Court ruled that the Italian steamer was at fault, not the Soviet school ship.

It was during these salad-days of the pre-WWII Red Navy that the Tovarish proved a happy and successful ship. Her cadets included many men who would go on to become admirals of the Red Navy during and after the war. One of the heroes that walked her deck was the infamous Alexander Marineseko, the highest scoring submarine ace in Russian history. While aboard Tovarish at age 17, Marinesko stood on his hands high up the tallest mast of the ship. Seeing the young man teetering precariously 20 meters above the deck, the ship’s longtime captain, Ivan Freiman prophesied: “You will go through a whole lotta pain, young man, if you do not learn to tame your desires and your nature!” The cadet should have listened, because even though he sank two huge German naval troopships in the Baltic (Wilhelm Gustloff and General Von Steuben) taking more than 15,000 souls down in the process, he was cashiered from the Navy for drinking and chasing tail.

When World War Two broke out, the Tovarish was sitting at Novorossisk in the Black Sea. As the Germans approached the port in 1941, the Soviets abandoned the school ship, opening her to the sea. The Germans were able to raise her and tow her to Mariupol where she sat as a floating barracks ship for the Croatian Naval Legion (Hrvatska Pomorska Legija). 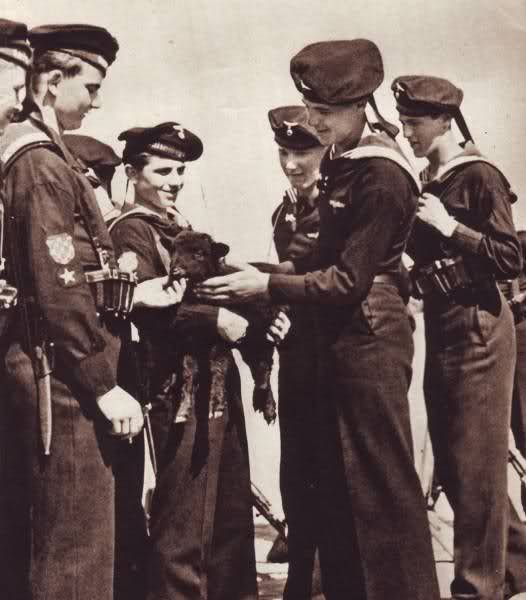 The Croatian Naval Legion wore German Kreigsmarine uniforms with a Croat checkerboard emblem on the sleeve. These Adriatic sailors lived and fought from the Tovarish for nearly two years

This group of 340 ethnic-Croat sailors was formed by the Nazi-puppet Croatian Government and sent to the Black Sea  to man minesweepers and patrol boats for the Germans. The Croatian government hoped that the German Kriegsmarine would use their valiant countrymen on the Eastern Front to gain valuable experience and form the core of future free Croatian Navy. Active throughout 1942, the Croatian Legion owned 31 small sailing-craft and 35 motorboats, which they operated from the mother-ship Tovarish.

In August 1943, with the Soviets closing on  Mariupol, the Germans/Croats sank the ship for the second time, with Soviet aircraft finishing the job. There she sat on the harbor floor until 1959 when she was raised and scrapped. Her anchor was retained In the Town Square near the port gate, where it remains  to this day, a 4-ton 1890s Irish anchor in a Ukrainian port.

She was also remembered with a special gold coin for the 300th Anniversary of the Russian Navy in 2000, as well as a postage stamp by the Soviet Union in 1981.

*(As a side note, when the Soviet Navy seized the scuttled German training ship SMS Gorch Fock at the end of the war, she was soon salvaged and repaired as a replacement for the lost Torvarich. Fittingly, that replacement ship carried the name Tovarisch in the Soviet Navy from 1951-90 and then in the Ukrainian Navy until 1999. This kept a legacy of nearly 75 years of naval training on a sailing ship named Comrade, flying the red banner fleet’s ensign. )
Specs:

If you liked this column, please consider joining the International Naval Research Organization (INRO)
They are possibly one of the best sources of naval lore http://www.warship.org/naval.htm

The International Naval Research Organization is a non-profit corporation dedicated to the encouragement of the study of naval
vessels and their histories, principally in the era of iron and steel warships (about 1860 to date). Its purpose is to provide information and a means of contact for those interested in warships.

Nearing their 50th Anniversary, Warship International, the written tome of the INRO has published hundreds of articles, most of
which are unique in their sweep and subject.