Posted on August 12, 2015 by laststandonzombieisland 2 comments Here we see the modified V-class destroyer HMS Vansittart (D64) of the Royal Navy tied to a buoy in 1943. The hardy ship was a member of a huge group of WWI-era British tin cans that pulled yeoman service in the twilight of their lives.

In 1916, the Admiralty was in dire need of as many destroyers as they could find to fight the ever-growing U-boat menace that threatened to cut the British Isles off and hand victory to the Kaiser. This led to a crash emergency order of up to 107 Admiralty V-class flotilla leaders.

The Brit’s previous design– the 275-foot/1,075-ton S-class– mounted three 4-inch popguns, a pair of 18-inch torpedo tubes and could make 36 knots on two boilers. Well, the new V-boats were much larger at 312-feet/1,360-tons, higher to allow for a large wireless suite, needed three boilers, but upped the armament to a quartet of QF 4 in Mk.V mounts and 3 21 inch torpedo tubes a triple tube arrangement.

The first ship, Valentine, was laid down in August and completed just seven months later. By the end of the war, these hardy boats numbered some 67 hulls afloat and the remaining 40 were canceled.

Now enter the subject of our tale: HMS Vansittart (D64).

Laid down at William Beardmore and Company, Dalmuir, on New Year’s Day 1918 (no holidays off during wartime) she was completed after the war and only commissioned 5 November 1919.

Built to a modified W-class design, she shipped 1,550-tons largely due to her heavier suite of 4 x BL 4.7 in (120-mm) Mk.I guns, each capable of firing a 50-pound semi-armor piercing shell to 14,450 meters and a full half-dozen torpedo tubes rather than the original trio.

Vansittart served with the 4th Destroyer Flotilla and the Mediterranean squadrons then was laid up in 1925 due to the overall draw-down of the RN in those lean years. For the next 14 years, she was part of the Maintenance Reserve at Rosyth, staffed by reservists occasionally on summer training, and was reactivated in August 1939 as the drumbeat of a new war called.

By September 12, she was part of the 15th Destroyer Flotilla and serving on convoy duty in the Channel, protecting the BEF crossing into Europe. Next, Vansittart shipped to Norway and took part in the pivotal destroyer clash that was the Battle of Narvik, where she was damaged by German aircraft, then promptly returned to convoy duty and the evacuation of Rotterdam in May.

U-102 took all 43 hands including Kptlt. Harro von Klot-Heydenfeldt to the bottom.

Vansittart at the time had a very photogenic mascot. 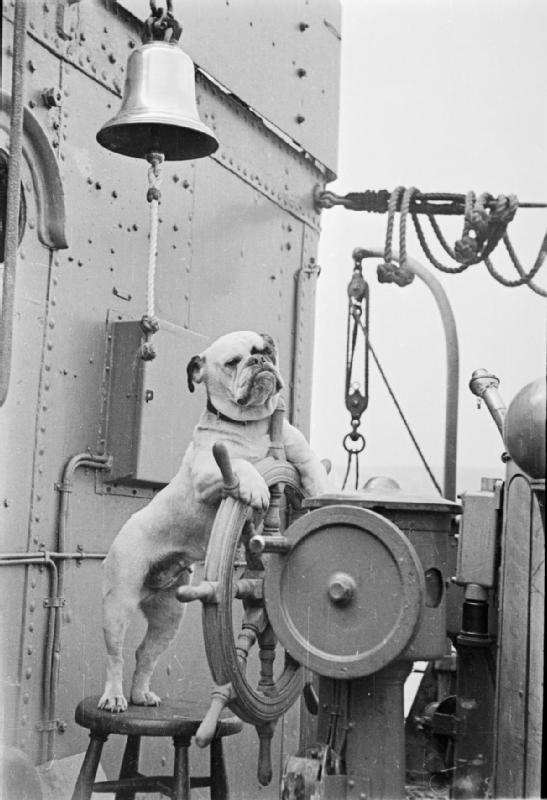 A bulldog named Venus stands at the helm of the HMS Vansittart, a British Destroyer, c.1941

Venus was one god looking pooch

1941 saw Vansittart assisting in mine laying operations off the French coast and spending a few days in May searching for SMS Bismarck.

She was adopted by the town of Kidderminster during the Warship Week National Savings drive in December 1941. The RN got their money’s worth out of the Great War-era ship, later allowing Hereford to adopt the old girl as well in the war.

THE MAYOR OF KIDDERMINSTER, ALDERMAN O W DAVIES, VISITS HMS VANSITTART – THE TOWN’S ADOPTED SHIP. 11 JUNE 1942 IWM photo A 10786 (The officer shaking hands with the mayor of Kidderminster is Lt Cdr Thomas Johnston DSC, who captained HMS Vansittart from 1942 to 43 including the relief of Malta)

In February 1942, she reported to Gibraltar and took part in the epic resupply convoys to besieged Malta including Operation Pedestal where she helped screen HMS Eagle from both air and submarine attacks.

By 1943, she was undergoing a six-month refit at Middleborough from which she emerged with a more potent AAA defense, and traded in half her torpedo tubes for more ASW weapons, but restricted to just 25 knots.

This put her back to escorting merchant convoys in the Atlantic for the rest of the war, including some very hard service in the ice zones. 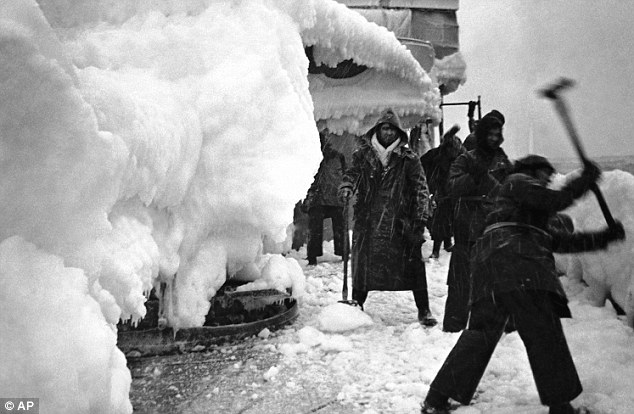 Chipping away ice on the deck of H.M.S. Vansittart on convoy escort duty in the Arctic 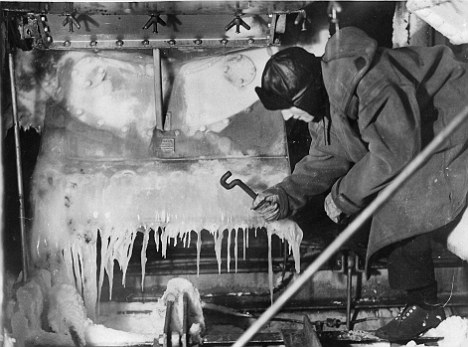 Soon after VE Day, unneeded for the war in the Pacific, she was placed up for disposal along with the rest of the ships of her class still in the Atlantic.

As a whole, these hardy little ships gave their full measure, with many going down fighting.

One, Vehement, was lost to a mine in the North Sea in 1918. Two others, Verulam and Vittoria were lost to the Bolsheviks in the Baltic in 1919, and 9 would go on to meet their end at the hands of Axis forces in WWII.

At least 35 of the class survived the war only to be unceremoniously paid off and sold to the breakers between 1945 and 1948. The last afloat, the Australian-manned HMAS Vendetta (D69), was scuttled off Sydney on 2 July 1948.

The hero of our story is not immune to this fate, being sold to BISCO for scrap on 25 February 1946.

She is remembered on a .26 Euro stamp issued to commemorate the 70th anniversary of the Malta run.