I yam what I yam

Here we see the Mk 75 Oto Melera Super Rapid Mount on the Boston-based USCGC Spencer (WMEC-905).  These Italian-designed 76mm/62cal guns were made under license in the U.S. starting in 1978 by FMC Naval Systems Division and went on to arm the 51 Perry-class frigates and half-dozen Pegasus-class PHMs of the Navy as well as the 25 Medium (270′) and High (378′, replacing 5″ Mk38 guns) Endurance cutters of the Coast Guard.

Spencer ran her mount with Popeye in the 1990s…

As you will note, the mount carries a great Popeye logo, complete with 76mm shells and dope leaf tattoos.

However, in recent years, Spencer has scrubbed the Spinach-eating icon from their forward mount, and it is more ship-shape today.

BTW, what is up with those wonky hull numbers? Deck Division! Come on…

Now, the Coast Guard is the lantern holder for the Mk 75 platform, with the USN formally ditching the Perrys and PHMs long ago.

Currently the USCG has less than 20~ platforms still carrying the now-legacy Carter-era guns, which are kept running by BAE Systems. Those will eventually be retired as the new Offshore Patrol Cutter program comes online in the next decade. Likely replaced by the current standard Mk 110 57mm Bofors popgun.

However, you can be sure there will be GMG shenanigans with these 76mm’s until that day. 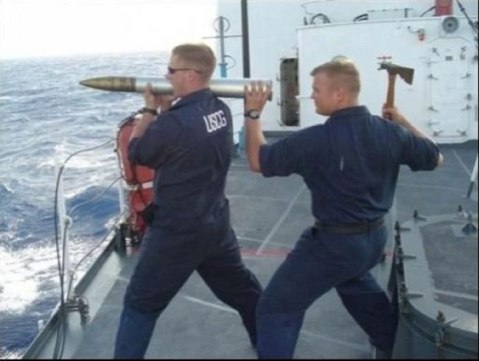