Combat Gallery Sunday: The Martial Art of Geoffrey Muirhead Bone, of the Somme and the Sea

Sir Muirhead Bone N.E.A.C., H.R.W.S., H.R.S.A was born 23 March 1876 in Glasgow, the son of a journalist. Bone trained to be an architect, whilst attending evening drawing classes at Glasgow School of Art where, in 1894, he decided to become an artist.

He worked for a period as a freelance illustrator for the Scots Pictorial as he honed his skill in pencil, watercolor, charcoal and gouache; as well as an etcher and sculptor. 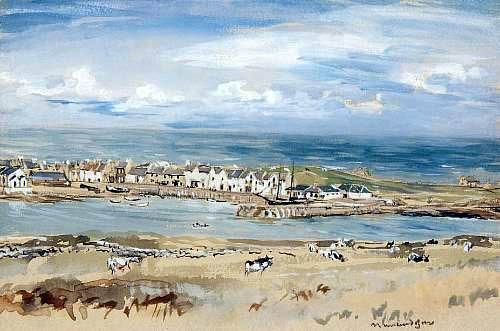 His drawings of Scotland served as inspiration for later etchings, and this precise and charming watercolor has all the definition of an etching. Bone was an outstanding draughtsman with an acute sense of observation. Bone moved to London in 1901 but was to travel extensively throughout his life.

In May 1916, at the suggestion of William Rothenstein, 40-year-old Bone was appointed the first Official War Artist of the British War Propaganda Bureau, serving with Allied forces on the Western Front and for a time with the Navy.

His first assignment: The Somme, where the flower of British and Commonwealth youth was snuffed out in the blink of an eye 100 years ago this month.

As noted by the Imperial War Museum:

Bone arrived in France on 16 August 1916 at the height of the Somme offensive. He was made an honorary second lieutenant and provided with a car, giving him easier access to the battlefields.

He mostly recorded life behind the lines, illustrating the context and impact of the battle rather than scenes of fighting. He depicted the work of the medical services, encampments, soldiers off duty, soldiers marching, landscapes and ruined towns.

He later said: ‘I did not like to imagine war scenes & so only drew what I saw & then only when I had a chance to draw it. I am afraid [this] resulted in rather prosaic work’.

The detail and accuracy of Bone’s drawings provided an authentic, eyewitness record of the immense logistic efforts of the Somme, one that proved extremely popular and resulted in more war artists being commissioned. 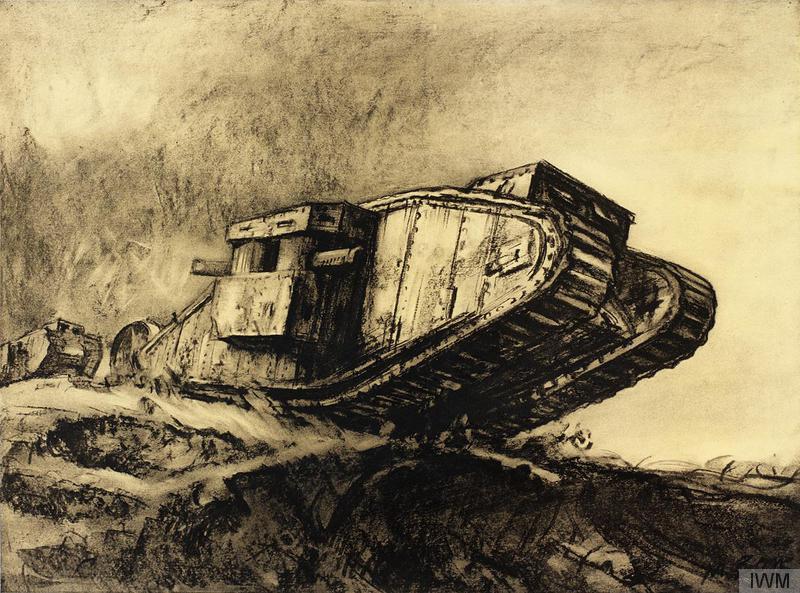 Guards Mustering for a Royal Review behind the Somme 1916

Watching our Artillery Fire on Trônes Wood from Montauban 1916 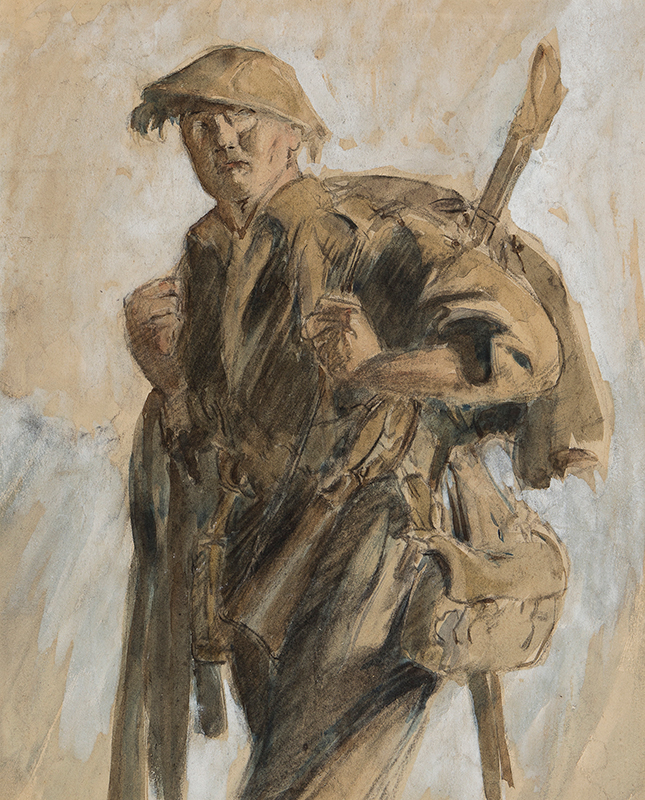 Many of these were published during the war as The Western Front, a two-volume set of drawings with captions by Muirhead Bone, published in 1917, which is a classic of military art for the past 99 years.

The cover of The Western Front: Drawings by Muirhead Bone. Click here to download the full volume of drawings.

There was evidence this volume was used as propaganda during the war with the government’s own bio of Bone stating:

12,000 copies of the publications were to be sold, 12,000 were to be used for propaganda and 6,000 were sent to America. The publication was also translated into French (Agence et Messageries du Figaro, 1916) and 300 of these editions were sent to France along with 500 in the original English. Plates and postcards were also reproduced for distribution. There is also evidence to prove, however, that what was represented in Bone’s sketches, etchings and lithographs was represented as truthfully as possible.

Besides his work on the Western Front, he spent a good bit of 1917 observing the wartime RN, which enabled him to publish With the Grand Fleet

Nightwork on the Great Gun 1917

Between the wars, he returned to what he loved and knew best: landscapes.

Then came WWII and Bone was off again, becoming a full-time salaried artist to the Ministry of Information specializing in Admiralty subjects. 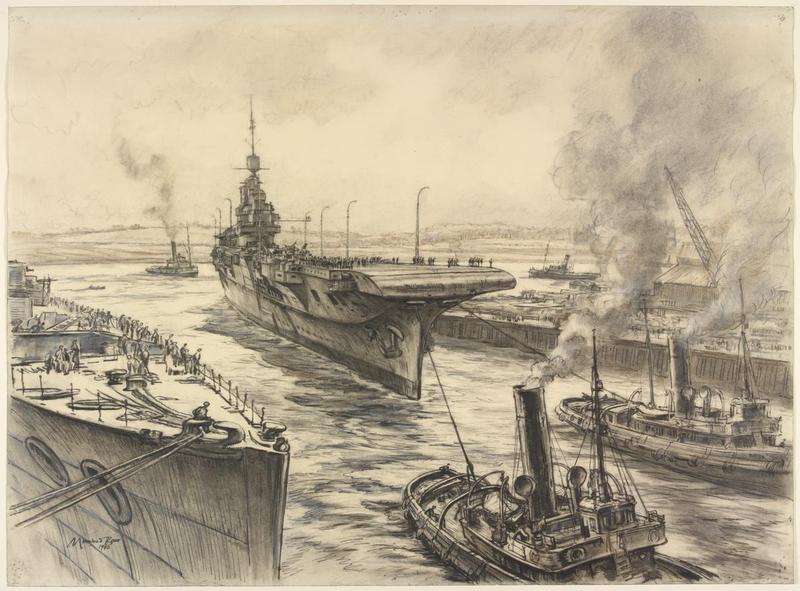 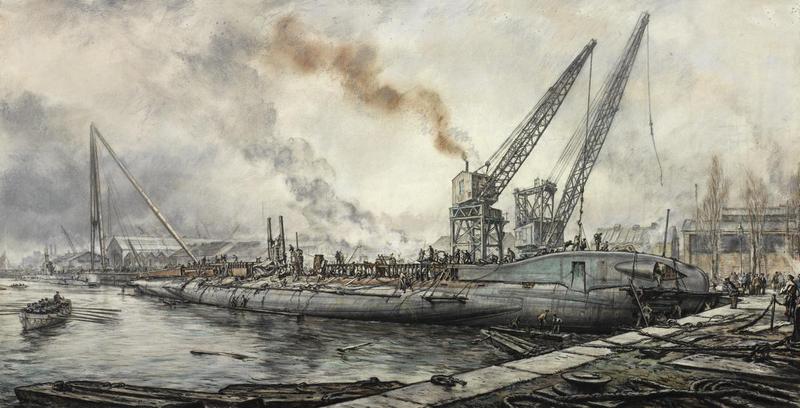 Building HM Submarine Tradewind, a Royal Navy submarine under construction in a dockyard. The hull is in place in the water, with numerous workers on deck, where they are busy assembling the conning tower and whole upper deck. Two large cranes are visible in the background and there is a large rowing boat in the water in the left foreground. IWM ART LD 3315. Built as P329 at Chatham, and launched on 11 December 1942, HMS Tradewind was infamous for sinking the Japanese army cargo ship Junyō Maru on 18 September 1944. Unbeknown to the Commanding Officer of Tradewind, Lt.Cdr. Lynch Maydon, the Junyō Maru was carrying 4,200 Javanese slave laborers and 2,300 Allied prisoners of war of which she took down 5,620 with her into the darkness. 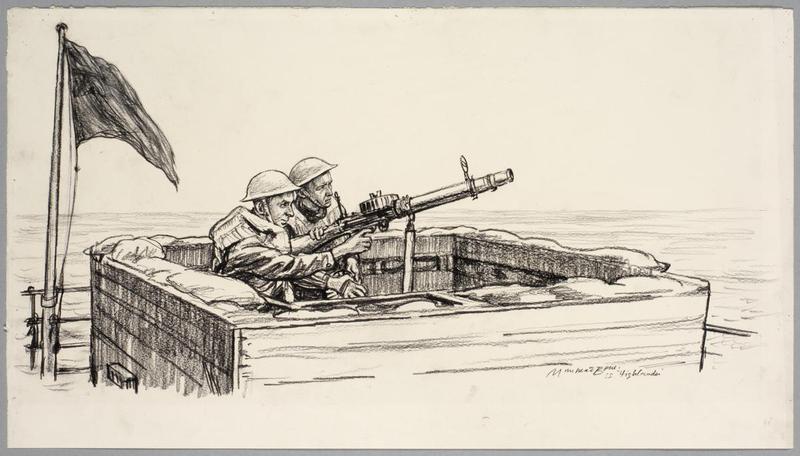 A portrait of George Anderson and Lawrence Smith Halcrow, shown manning a Lewis gun in an emplacement on the deck of SS Highlander. IWM 3020

Lowering a mine into the mining deck, Dec. 1940 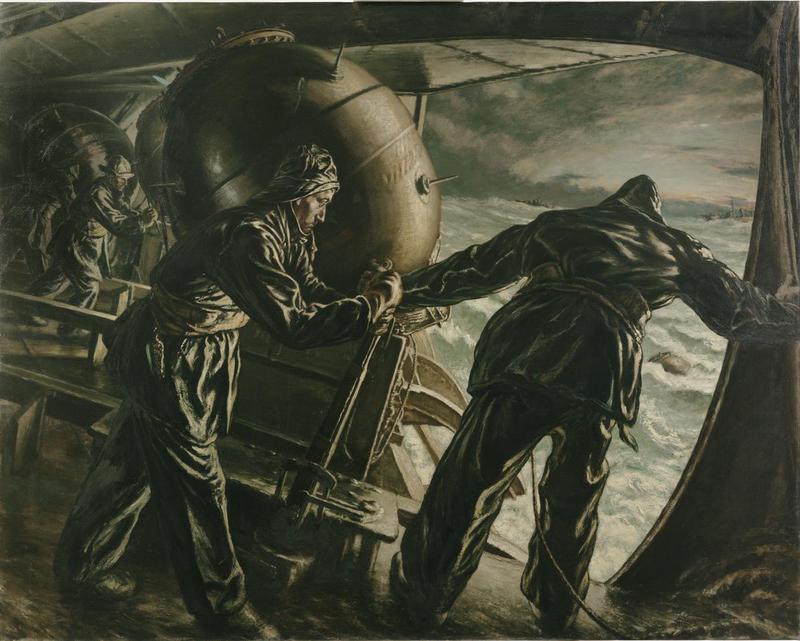 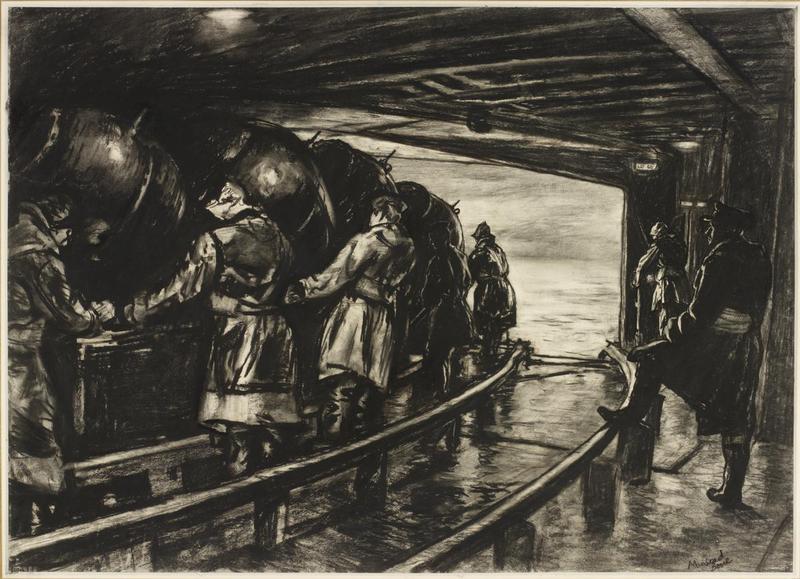 Minelaying: The last of the lay

Much of his Bone’s art is preserved and on public display throughout the UK, cataloged over at Art UK and in the collection of the Imperial War Museum and the Tate.