Warship Wednesday, July 19, 2017: The Belgian sword master and his legacy

Posted on July 19, 2017 by laststandonzombieisland 4 comments

Warship Wednesday, July 19, 2017: The Belgian sword master and his legacy

Here we see the Butler-class destroyer escort USS Corbesier (DE 438) in an undated photo, likely somewhere in the Pacific in late WWII. She was named after an extremely well-known (for his time) expert with a blade.

“Cutlasses, lads!” was a standard call to prepare to repel boarders going back to the Continental Navy with Colonial armorer Richard Gridley and John Bailey reportedly crafting a number of these curved short swords for Washington’s fleet.

As described by JO2 Meckel in 1957’s “The Cutlass Carved Its Niche in Our Navy’s Annals,” the fledgling U.S. Navy ordered small lots of cutlasses from sword makers Nathan Starr of Middletown, Connecticut; Lewis Prahl of Philadelphia; and Robert Dingie of New York.

These early swords were later augmented and then replaced by the Ames Cutlass in two variants (1842 and 1860) with the latter, remaining in service amazingly through WWII.

Moving from the Barbary Wars and War of 1812 to the Civil War, the Navy’s love affair with the cutlass remained intact, even as armor plate, steam engines, Gatling repeaters, torpedoes (mines) and rifled naval guns moved combat into modern terms.

With the need to remain trained in these traditional edged weapons, you need a swordmaster.

Enter one very dapper Antoine Joseph Corbesier, a man skilled at the noble art of attack and parry with a sword.

As noted by DANFS, Corbesier was born 22 January 1837 in Belgium and, after service with the French, emigrated to America.

As described by Fencing Classics, “A brief advertisement in the New York Tribune, from October 19, 1863, places him in New York during the time of the Civil War, where he was a teacher at the New York Fencing Club before opening his own school.”

By 1865, the 28-year-old European fencer was Sword-Master of the U.S. Naval Academy in Annapolis and, had made such an impression on the very gruff Admiral David Dixon Porter, then Superintendent, that Porter endorsed Corbesier’s 76-page text on sword fighting published in 1868.

“Principles of Squad Instruction for the Broadsword” soon became the standard tome for the use of naval cutlasses in the U.S. Navy and the influence can be seen for decades, along with other works he produced on the bayonet. 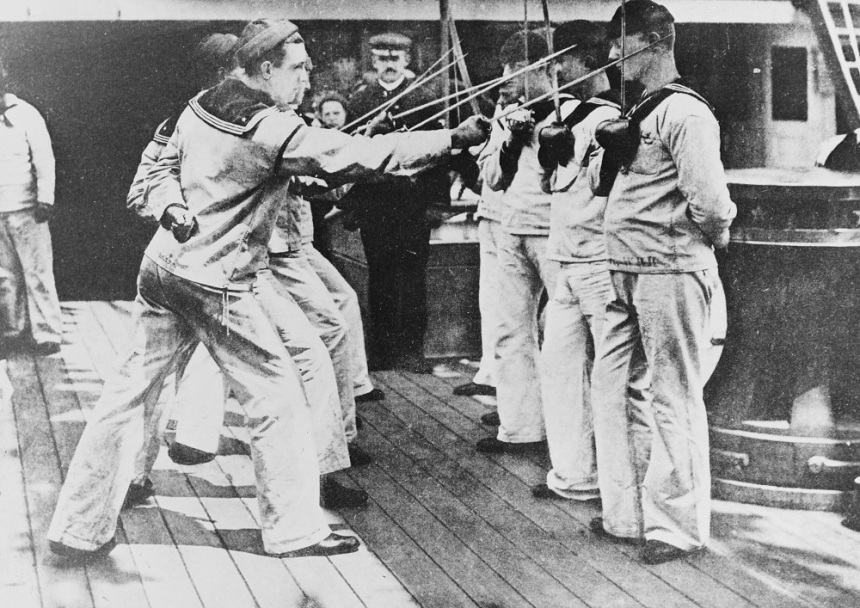 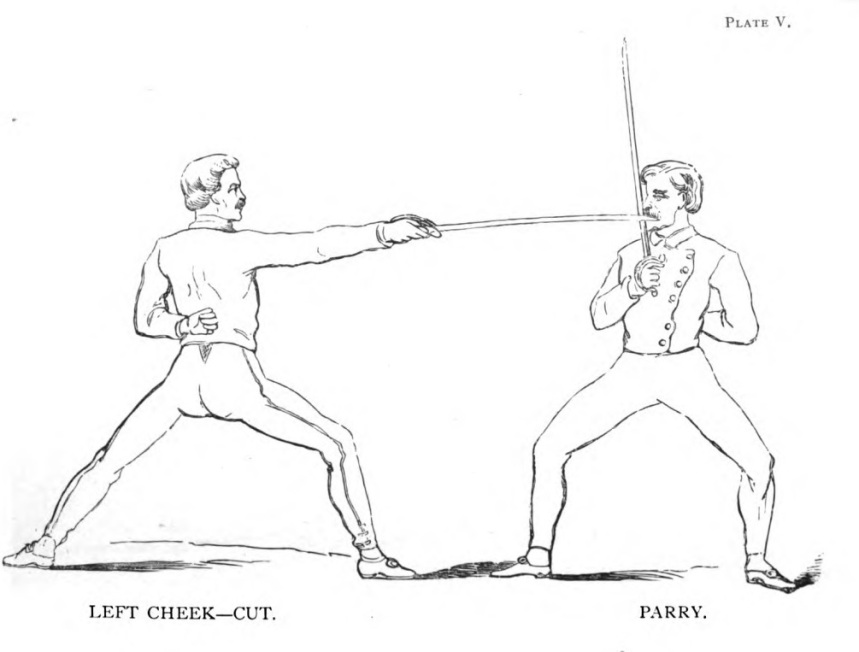 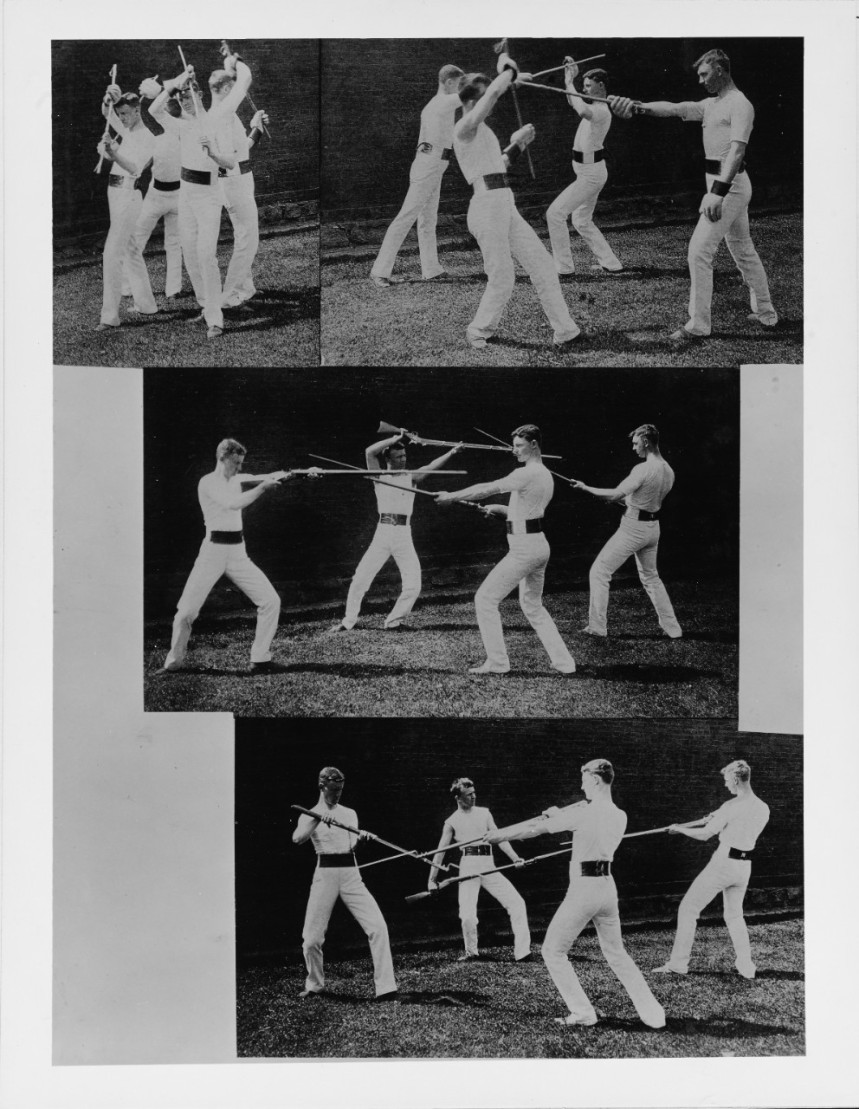 Meanwhile, new ships coming on line, even though they were modern steam vessels lit by electric light, were still given their (reduced) allotment of cutlasses which, in naval tradition, would remain aboard until the ship was removed from the Naval List, ensuring the swords would float around through the Spanish-American War, Great War, and even into WWII.

USS Enterprise (1877-1909) Ship’s Apprentices pose by the port side quarterdeck ladder, while Enterprise was at the New York Navy Yard, circa spring 1890. Photographed by E.H. Hart, New York City. Note the figure-eight Apprentice mark visible on the uniforms of several of these men, and cutlass fan on the cabin bulkhead at left. Stern of receiving ship Vermont is partially visible in the left background. U.S. Naval History and Heritage Command Photograph. Catalog #: NH 54215

Cutlass practice between Marines and sailors in an image right out of Corbesier’s book-1890s-aboard the early protected cruiser USS Newark (C-1). LOC photo via Shorpy colorized by Postales Navales

Cutlass rack: Lot 3000-A-20: U.S. Navy protected cruiser, USS Atlanta, quarterdeck, 1890-1912. Note, Atlanta was one of the first steel warships of the New Navy. Detroit Publishing Company. Courtesy of the Library of Congress.

Steam Sloop USS Richmond, Sailors polishing brass, circa 1899, note the cutlass rack to the right and the bluejacket to the left with a blade. Also, note the African-American crewmember. LOC LC-D4-20927 (cropped)

By a special act of Congress, after more than 40 years of instruction at the Academy, Corbesier was given the rank of first lieutenant in the U.S. Marine Corps 4 March 1913.

He died in the Naval Hospital at Annapolis on 26 March 1915, where he lived at the time.

His obituary ran in several nautical journals of the day, the below from Seven Seas Magazine.

Even with the great swordsman gone, the Navy kept the cutlass on tap, and they continued to see service in far-flung ports when needed, even apparently being broken out once or twice in China as late as the 1930s.

On the eve of the Great War, the Navy attempted to replace the Civil War-era Ames Cutlass with the new M1917 Naval Cutlass, based on the Dutch Klewang boarding sword, though its adoption seems more miss than hit.

1.Officers of the Navy, Coast Guard, and Marine Corps, shall no longer be required to possess swords as part of their uniform equipment.

2.The various uniform regulations will be modified accordingly.

3.It is expected that a form of dirk will, in due course, be adopted as uniform equipment in lieu of the sword.

4.Due to the urgent need for metals, it is suggested that officers, who may so desire, turn in their swords for scrap.-SecNav. Frank Knox.

This order, as noted by NHHC Curator Mark Wertheimer in 2003, did not affect cutlasses still in unit and vessel armories, and they “remained an ordnance allowance item until 1949” indeed, being done away with in by NavOrd Inst. 4500-1 in November 1949. Reportedly, some Marines even carried them ashore in the Pacific for use as machetes during the jungle fighting of WWII.

However, the swordsman may have been gone, and his weapons headed for the literal scrap heap, but he was not forgotten.

On 11 November 1943 at Dravo shipyard in Wilmington, Delaware, a Cannon-class destroyer escort was named USS Corbesier (DE-106) in his honor. She went on to be commissioned as the Free French Naval ship Sénégalais (T-22) on 2 January 1944, which is fitting to a degree based on Corbesier’s French military service in the days of Napoleon III.

Sénégalais went on to seriously damage German submarine U-371 just five months after she was taken over by the French, taking a German homing torpedo in the exchange.

Sénégalais (French Escort Ship, formerly USS Corbesier, DE-106) French sailor paints a submarine kill symbol on the ship’s smokestack, following the sinking of German submarine U-371 off the Algerian coast on 4 May 1944. During the action, Sénégalais delivered the final attack on U-371 but was herself torpedoed and damaged. Official U.S. Navy Photograph, now in the collections of the National Archives. Catalog #: 80-G-K-1606

The French ship went on to serve that Navy until 1965, being scrapped in Germany.

23 January 1945:
15 miles NE of Yap Island. At 0310, USS CORBESIER (DE-438) makes a radar contact at about 9,800 yds. The target is heading 210 degrees at 18 kts. After CORBESIER closes to investigate, I-48 dives. At 0336, CORBESIER obtains a sound contact and fires a salvo of Mk.10 “Hedgehog” projector charges but misses. CONKLIN and RABY (DE-698) join the chase. CORBESIER makes five more Hedgehog attacks, all with negative results, finally, losing the contact.

At 0902, CORBESIER regains contact and executes another “Hedgehog” attack, again with negative results. At 0912, CORBESIER reestablishes sound contact with the sub, but loses it before an attack can be made. CONKLIN makes a new “Hedgehog” attack at 0934, from a distance of 550 yds. Seventeen seconds later, four or five explosions are heard from an estimated depth of 175 ft. At 0936, a violent explosion occurs, temporarily disabling CONKLIN’s engines and steering gear. Huge air bubbles come up alongside; soon thereafter oil and debris surface. Large quantities of human remains are likewise sighted.

17 miles N of Yap. A motor whaleboat from CONKLIN picks up pieces of planking, splintered wood, cork, interior woodwork with varnished surfaces, a sleeve of a knitted blue sweater containing flesh, chopsticks and a seaman’s manual. I-48 is sunk with her 118-strong crew and four kaiten pilots at 09-55N, 138-17.30E

It wasn’t gentlemanly swordplay, but it was no less deadly.

Corbesier went on to serve off Okinawa, parrying attacks from Japanese kamikaze off Okinawa. She completed the war with two battle stars, and berthed at San Diego, was decommissioned in 1946. She was scrapped in 1972.

The Navy has not named another vessel after Adm. Porter’s swordmaster.

They did bring back the officer’s dress sword in 1952, in 2011 CPOs were granted the authority to carry a mil-spec cutlass on certain occasions, and today the (ceremonial) use of the sword is instilled in the Marine’s Corporal’s Course, so there is that.

And yes, there are still a few old-school Ames-style cutlasses around, which would warm Corbesier’s heart.

Petty Officer 3rd Class Tenika Fugate, assigned to USS Constitution, raises a cutlass during a color guard detail in Old Town during Albuquerque Navy Week. Navy Weeks are designed to show Americans the investment they have made in their Navy and increase awareness in cities that do not have a significant Navy presence. (Photo by Petty Officer 1st Class Eric Brown)

Even when the uniforms change, the cutlass endures… 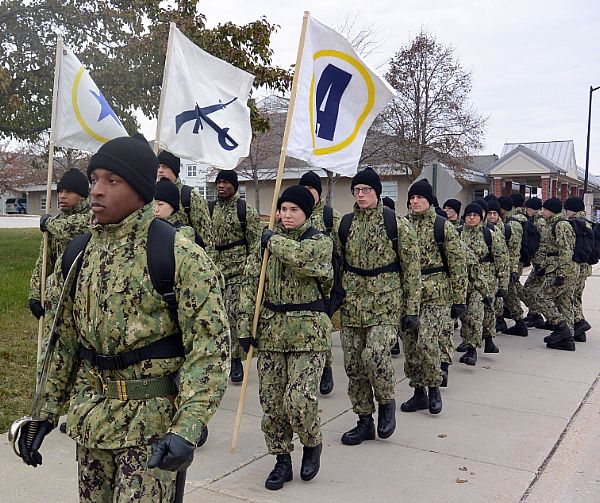 His “Principles of Squad Instruction for the Broadsword” is in the public domain, has been digitized, and is widely available, ensuring that it will endure.

And of course, if you are passing through the Naval Academy, stop by the Cemetery and Columbarium, and visit Lot 394 to pay your respects.

Yet, “If the Army and the Navy Ever look on Heaven’s scenes; They will find the streets are guarded By United States Marines,” holds true, the swordsman may still be holding class.