On the eve, 48 before Overlord 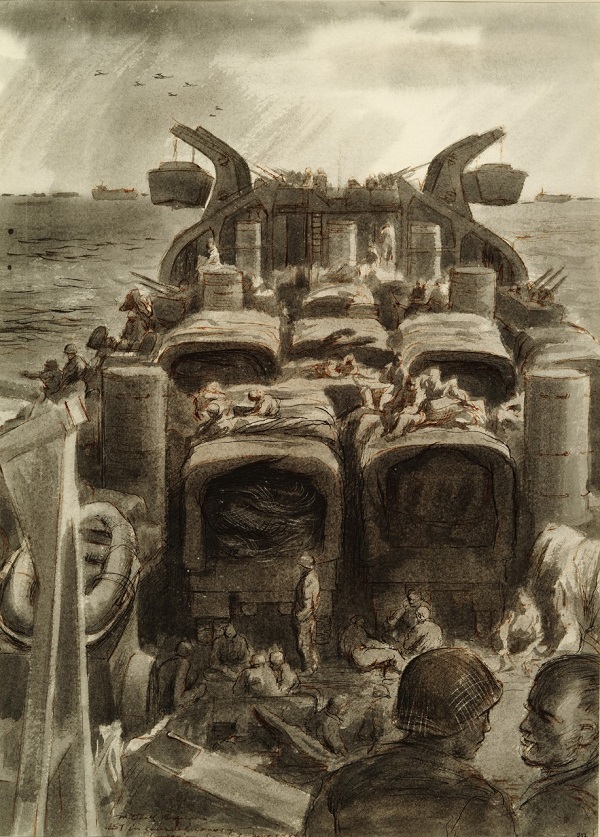 “A view on board an LST, looking forward from the bridge, with the main deck below fully loaded with trucks, anti-aircraft half-tracks, jeeps, and trailers. Ahead and on both sides were other LSTs in the group, each towing its “rhino” ferry which was manned by skeleton crews of Sea Bees, the rest of the crews were on board the ships themselves. With the LSTs prevented by German artillery fire from coming to the landing beaches to unload, it was the job of the “rhinos” to unload the tank deck of each LST and go to the beach. Then, since the “rhinos” could only make a couple of knots an hour, the LSTs had to be unloaded offshore by LCTs. Later, when the beach was secured and the ships could come in closer, these “rhinos” operated a continuous shuttle service, unloading all types of ships. This LST, with its mobile anti-aircraft vehicles on deck in addition to the ship’s own anti-aircraft batteries, could put up a formidable screen of anti-aircraft fire. The anti-aircraft half-tracks were of two types: one carrying four quad-mounted 50-caliber machine guns, and the other with one 37mm anti-aircraft gun and two 50-caliber machine guns. The rear part of the half-track was where the gun turret was mounted. A soldier who sat with the gunners operated the turret electronically. Trucks carrying supplies and ammunition, with plenty of camouflage netting, are depicted on the main deck below in the foreground. There was about the same number of vehicles on the tank deck below, unseen. This was the evening of D-day minus two (June 4, 1944).”