The best tactic to beat the vile threat of U-boats in the Great War was the convoy, be it coastal, trans-oceanic, or whatever.

In WWII, the convoy was brushed off again, with success in the Atlantic, Med, and Pacific. An old tactic, but still a good one.

A staple of Cold War planning, ships like the Knox-, Spruance– and Perry-class frigates and destroyers were created with the purpose of shepherding convoys to Europe for NATO through a sea filled with Soviet attack subs and long-ranging Bear bombers.

Then, with the thaw in the late-1980s, the convoy tactic, with the exception of limited escorts in the Persian Gulf during the Iran-Iraq War, fell out of favor.

In short, convoying is a thing your Dad’s Navy and Grandpa’s Navy did.

With the 2nd Fleet rebooted, the Navy– for the first time since 1989– last week ran a convoy exercise in the Atlantic with a surface warfare asset and escorted mercies.

While MSC regularly tries to do such ops, it is usually just simulated and doesn’t include an actual escort or more than one vessel, so, while the four-ship group is small, at least it is a good sign of working those age-old skills that are sorely out of practice. 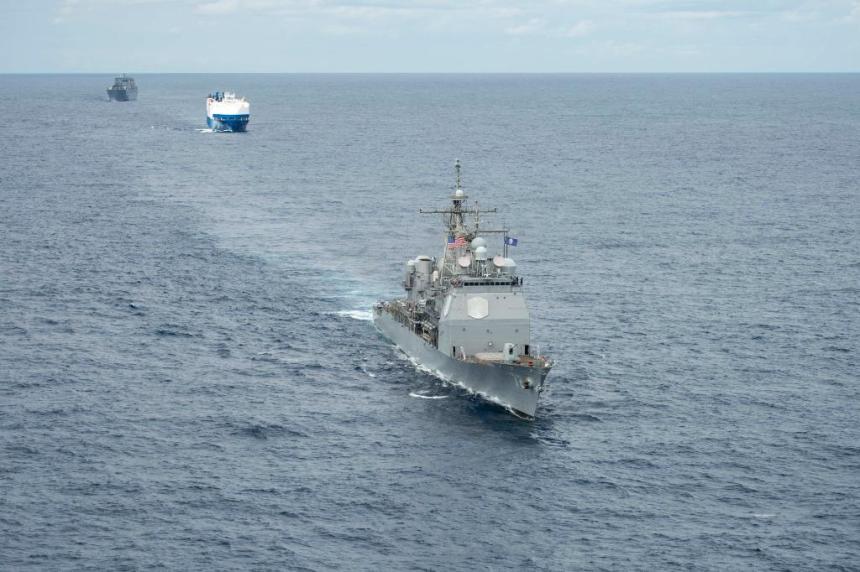 Plus, and the photo doesn’t show this, the group was screened over the horizon by the Ike carrier group while Navy P-8 ASW/ASuW aircraft and an SSN was on tap as well.

Sealift remains the primary method for transporting military equipment, supplies, and material around the world. With the return to peer competition and access to sea lanes no longer guaranteed, it is important that the Navy and MSC train together in order to ensure the successful delivery and sustainment of combat power necessary for the joint force to fight and win anywhere around the globe.

“In a real-world conflict, much of the military equipment must still go by sealift, which makes convoy operations a critical skill set to maintain and practice,” said Capt. Hans E. Lynch, commodore Military Sealift Command Atlantic. “In the last five years, there has been an increased emphasis on including Merchant Marine shipping in large scale exercises to enhance tactical proficiency. Exercises that incorporate convoy operations are an extension of that ongoing tactical training.”

This exercise will simulate an opposed transit, testing the fleets’ abilities to safely cross the Atlantic while testing new ways of conducting a convoy in today’s environment. Convoy operations were critical during WWI and WWII as the primary method for moving troops and military equipment, supplies and material to Europe. After WWII, convoys became less prevalent in the Atlantic theater, although still practiced in other areas of operation.

“The Atlantic is a battlespace that cannot be ignored,” said Vice Adm. Andrew Lewis, commander U.S. 2nd Fleet. “We need to be prepared to operate at the high end alongside our allies, partners and adversaries alike as soon as we’re underway.”

During her operations in the Atlantic, Nimitz-class aircraft carrier USS Dwight D. Eisenhower (CVN 69), along with P-8s from VP-4 and a U.S. submarine, cleared the maritime battlespace prior to the transit of the Vella Gulf-escorted MSC convoy.

“The coordination between NAVEUR, 2nd Fleet, and 6th Fleet are indicative of a seamless Atlantic Ocean,” said Adm. James G. Foggo III, commander, NAVEUR. “This exercise allows us to sharpen our ability to move critical resources across the Atlantic, from the United States to Europe.”

“As I have said before, logistics is the sixth domain of warfare, and a critical part of any successful operation or exercise,” Foggo said. “The transatlantic bridge is just as important today for moving troops and military equipment, supplies and material from the United States to Europe as it has been at any point in history.”

2nd Fleet and 6th Fleet work together to ensure the security of sea-lanes of communication in the Atlantic. If called upon, the Department of Defense’s sealift transportation fleet expects to move approximately 90 percent of required assets from the U.S. to the theatre of conflict. The safest and quickest way to get needed materials to the front lines is via maritime convoy.

“We, as a Navy, are inherently linked with the broader maritime industry and this exercise provides a great opportunity to train like we fight,” said Capt. Andrew Fitzpatrick, commander, USS Vella Gulf. “Practicing convoy operations flexes a blue-water, high-end skill for the first time in many years, enabling us all to operate on, above, and below the sea in a contested environment.”