Here at LSOZI, we take off every Wednesday for a look at the old steam/diesel navies of the 1833-1946 period and will profile a different ship each week. These ships have a life, a tale all their own, which sometimes takes them to the strangest places. – Christopher Eger 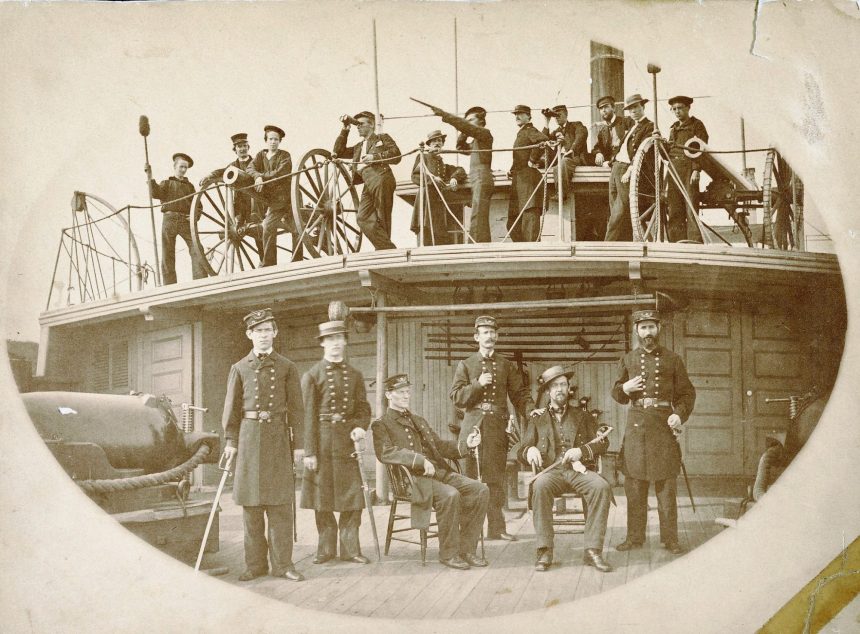 Courtesy of the Library of Congress. LC-DIG-PPMSCA-33402

Here we see the steam ferry-turned-gunboat USS Hunchback somewhere on the James River, likely in late 1864. Note leisurely sitting officers on the lower deck with the sailors carefully posing assorted nautical actions above, complete with spyglasses. The only U.S. Navy warship to bear the name (so far), she was extensively chronicled by Matthew Brady (or someone of his group) in period photographs during the Civil War.

A wooden-hulled sidewheeler steamer, Hunchback was constructed in New York in 1852 for use by the New York and Staten Island Ferry Company. Some 179-feet overall, she could make 12 knots, making her a reliable– and fast– way to move people and light cargo around the boroughs of the bustling metropolis.

Purchased by the Navy 16 December 1861, she sailed to Hampton Roads soon afterward and was commissioned there two weeks later, retaining her peacetime name. She joined such interesting vessels on the Naval List as USS Midnight, and USS Switzerland, likewise taken up from trade with their names intact, a necessary evil as some 418 existing ships were purchased for naval use by the Union fleet during the war in addition to the more than 200 new vessels ordered from various yards.

Armed with a trio of soda-bottle-shaped IX-inch Dahlgren smoothbore shell guns (two forward, one stern) and a fearsome 100-pound/6.4-inch West Point-made naval Parrott (capable of a 7,800-yard range) over her bow, she was assigned to the North Atlantic Blockading Squadron as a fourth-rate gunboat and by 5 February was in combat– only six weeks after her purchase– using her newly-mounted cannon to bombard Fort Barrow in support of Gen. Burnside’s invasion of Roanoke Island. She reportedly had to move in close to the Confederate works and received extensive punishment from the rebels in exchange.

No rest for the weary, her shakedown cruise continued with supporting landings up the Chowan River throughout the next month, coming to a head with a sortie up the Neuse River to New Bern where she and other gunboats of the Squadron engaged batteries and landed troops, capturing the key depot.

“The Battle at Newbern– Repulse of the Rebels, March 14, 1862.” Line engraving, published in Harper’s Weekly, 11 April 1863, depicting the action at Fort Anderson, Neuse River, North Carolina. U.S. Navy gunboats Hunchback, Hetzel, Ceres, and Shawsheen are firing from the river at Confederate forces, as Union artillery and infantry move into position on the near shore. NH 95121

Hunchback continued to see hot service in the sounds of North Carolina through September 1863, especially up the Chowan. During her 20 months in Tar Heel waters, she broke up the Confederate siege of Washington (N.C.) on the Pamlico River, helped defend Fort Anderson, captured at least four small ships, and engage rebels in an extended action below Franklin, Virginia.

It was against Franklin that one of her crew, Ohio-born bluejacket Thomas C. Barton, earned the Medal of Honor. His citation read,

“When an ignited shell, with cartridge attached, fell out of the howitzer upon the deck, S/man Barton promptly seized a pail of water and threw it upon the missile, thereby preventing it from exploding.”

Barton would go on to rise to Acting Master Mate and perish aboard the old 74-gun ship of the line USS North Carolina in 1864, likely from illness. It should be remembered that most of those who died in the Civil War did so from disease and sickness, rather than bullet and shrapnel.

Withdrawn from the line in late 1863, Hunchback would make for Baltimore where her war damage was repaired, her hull corrected, and her steam plant overhauled.

Thus reconditioned, the armed ferry returned to the fleet in May 1864, towing the new Canonicus-class monitor USS Saugus up Virginia’s James River where the armored beast, along with her sisters Canonicus and Tecumseh, could support operations against Richmond and defend against Confederate ironclads.

The 500-ton Hunchback would continue her time in the James River, based at Deep Bottom, for the next 10 months and was used as a fire engine of sorts, splitting her time running supplies and dispatches up the river while pitching in to provide brown water naval gunfire support along the muddy banks whenever the Confederates obliged to come within range. Her most notable action on the James was on 30 June when accompanied by Saugus, she clashed with Confederate batteries at Four Mills Creek.

It was during this Virginia period, sometime between May 1864 and March 1865, that she hosted a photographer, often chalked up as Matthew Brady– or at least someone associated with him, perhaps Egbert Guy Fowx. Notably, and something that is backed up by muster rolls that state many of her crew were enlisted “on the James River,” her complement included several apparent recently freed slaves. 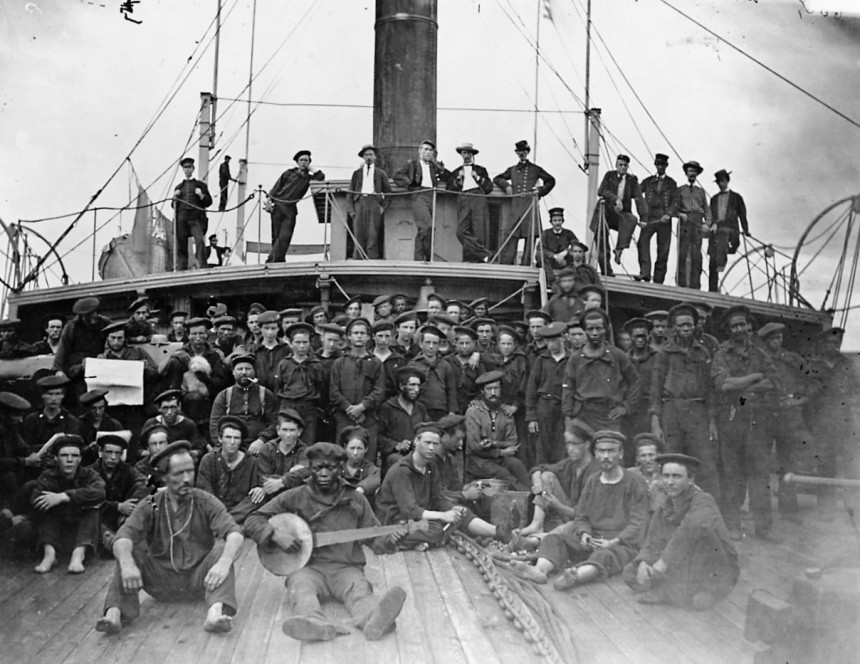 Ship’s officers and crew relaxing on deck, in the James River, Virginia, 1864-65. Formerly attributed to Mathew B. Brady. One man is playing the banjo in the foreground, another is holding a small white dog, while others are reading newspapers. Men seated in the center appear to be peeling potatoes. Many crewmen are wearing their flat hats in the style of berets and most have no shoes, a standard practice in naval service until the 20th Century. About a fifth of this ship’s crew appears to be African Americans. Also, note the two IX-inch Dahlgrens to the port and starboard. The original photograph has Brady negative number B-2011. Catalog #: NH 59430 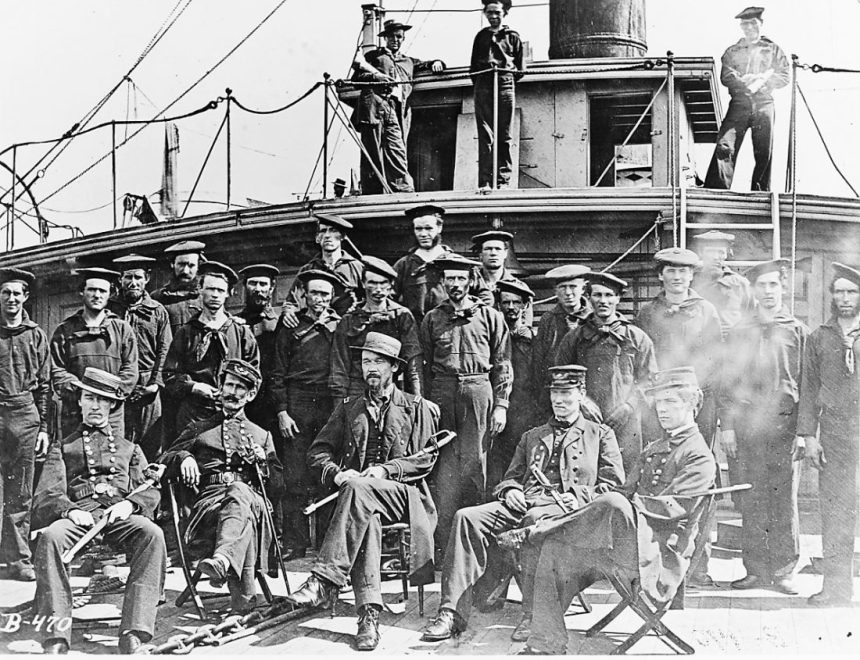 Some of the ship’s officers and crewmen pose on deck for the novelty of a photograph, while she was serving on the James River, Virginia, in 1864-65. Note swords, folding chairs, and details of the officer and enlisted uniforms to include informal straw hats at a jaunty angle. The original photograph has Brady negative number B-470. NH 51955 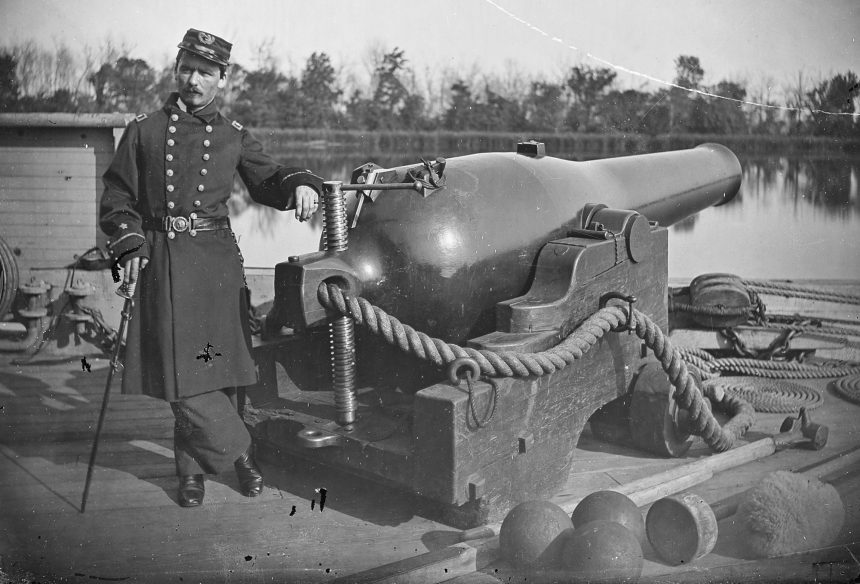 Deck of gunboat Hunchback on James River attributed to Matthew Brady. Note the detail of the ensign’s jacket and Model 1852 Officer’s Sword as well as the beautiful bottle-shaped IX-inch Dahlgren on a wooden Marsilly carriage with its crew tools and three shells on deck. The smoothbore beast weighed around 4.5-tons and used a 13-pound black powder charge to fire a 73-pound shell or 90-pound solid shot to 3,450 yards. LOC ARC Identifier: 526212 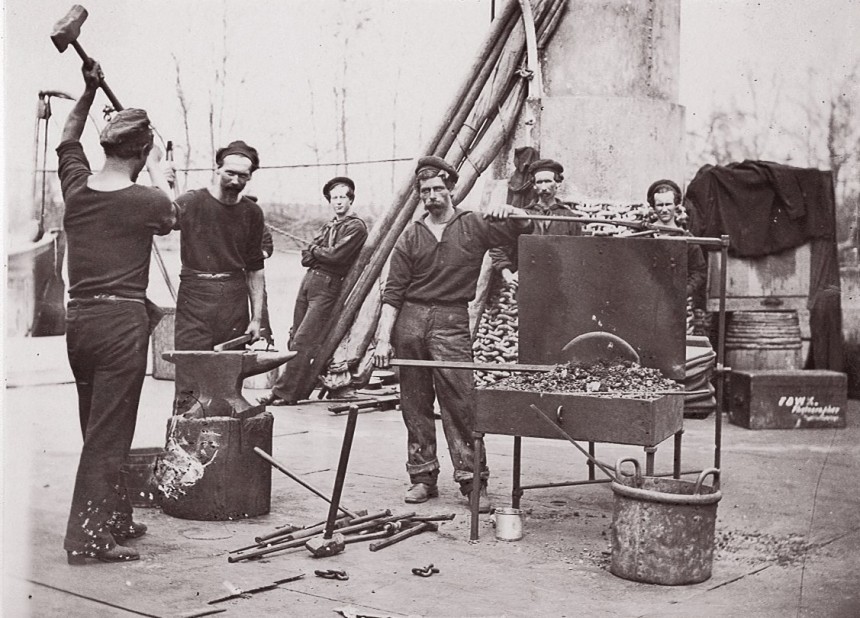 Boilermakers at work on Hunchback. Note the portable furnace and anvil. Formerly attributed to Mathew B. Brady, via The Met, accession no. 33.65.323

Officers at work on the Hunchback. These include a pair of Acting Ensigns aboard ship under a canopy. Note the sponge and ramrod for a naval gun overhead as well as a gun rack filled with muskets just inside the P-way. The elevation screw of what looks to be the ship’s single 6.4-inch Parrot is to the far left. Formerly attributed to Mathew B. Brady, via The Met, accession no. 33.65.321

Gunners loading a 12-pounder Dahlgren smooth-bore howitzer, which is mounted on a field carriage. Note three of the gun crew appear to be teenage (or younger) “powder monkeys.” Also, observe the roping around the wheels to provide traction on the ship’s wooden decks. Photographed in the James River, Virginia, 1864-65. The original photograph has Brady negative number B-6193. NH 59431

Loading drill on a Dahlgren 12-pounder rifled howitzer mounted on an iron field carriage. Note the combination sponge/ramrod in use and monkey at right with powder can. The original photograph has Brady negative number B-620. NH 59433

Two of the ship’s officers seated in folding chairs on the upper deck. Note the excellent view of Hunchback’s walking beam mechanism at right and 12-pounder Dahlgren smooth-bore howitzer in the background. The original photograph has Brady negative number B-613. Name “Rand” appears, erased on the back of the image. NH 59435

Just before the end of the war on 17 March 1865, Hunchback was sent back to her old stomping grounds in the coastal sounds of North Carolina– loaded with solid shot and three spar torpedoes (mines) in case she ran into a rebel ironclad— resulting in once again being sent up the Chowan River to clear the way for Sherman, who was marching North.

RADM David Porter, in writing to Commodore William H. Macomb, was blunt about the flotilla’s ability to halt any expected sortie by the Confederate ram CSS Neuse, sistership of the infamous CSS Albemarle— which was in fact not a threat at the time. 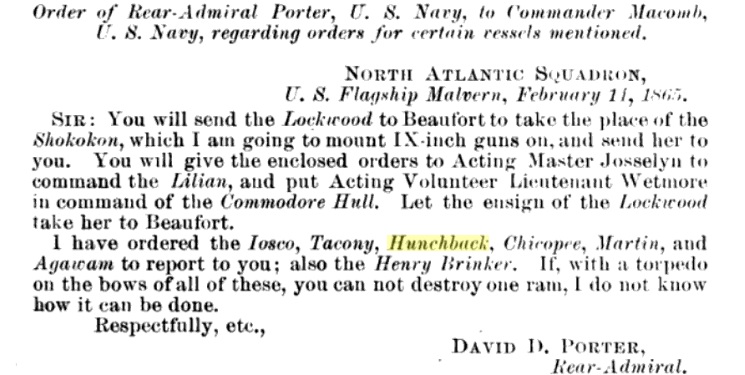 By 1 April, Hunchback made contact up the Chowan with advanced scouts of the 1st New York Mounted Rifles, part of the Army of the James pushing South, near Stumpy Reach (Point?), where her war effectively ended.

On 1 June, Hunchback was “sent north” on orders from Porter, along with at least 20 other converted steamers, no longer needed for any sort of naval service, and swiftly disarmed and decommissioned at New York 12 June 1865.

She was sold 12 July 1865 to the New York & Brooklyn Ferry Co., was renamed General Grant in 1866, and remained in service until 1880. While some records have her on the Brooklyn-to-New York ferry run for the next 15 years, the City of Boston has records of her purchase, for $23,000 in December 1865, to the East Boston Ferry Company.

Her final fate is unknown, but as she was a wooden-hulled vessel, it is not likely she endured much beyond the 1880s.

The muster rolls of the Hunchback, as well as extensive disapproved pension applications for her former crew members, are in the National Archives. 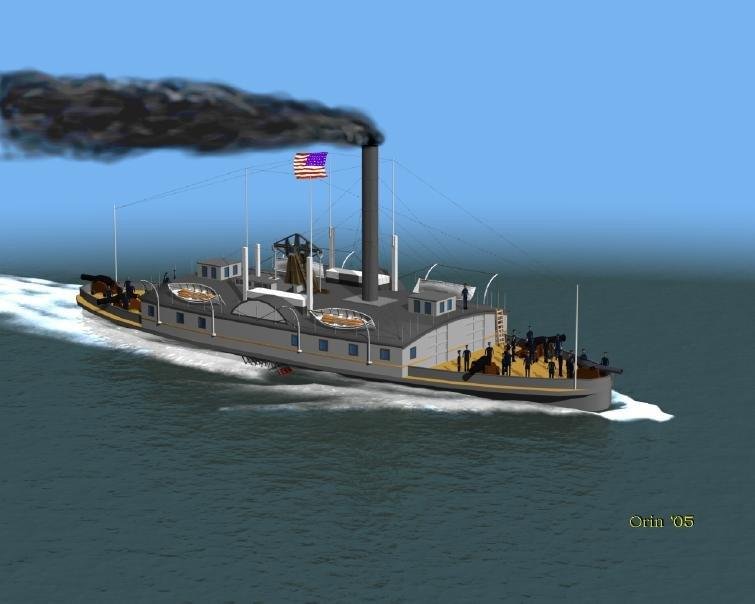 Displacement: 517 tons
Length: 179 ft.
Beam: 29 ft.
Depth of Hold: 10 ft.
Propulsion: One 40-inch bore, 8-foot stroke vertical walking beam steam engine; twin sidewheels
Speed 12 knots
Crew: Listed as “99” although some muster rolls have her with as many as 125 aboard
Armament: Hunchback was listed in naval returns as having 7 guns, however, DANFS just lists:
3 x 9-inch guns
1 x 100-pounder 6.4-inch Naval Parrott rifle
She also carried at least two if not three 12-pounder landing guns, as extensively shown in photos, which could explain the apparent discrepancy.
In 1865 she also apparently carried a spar torpedo