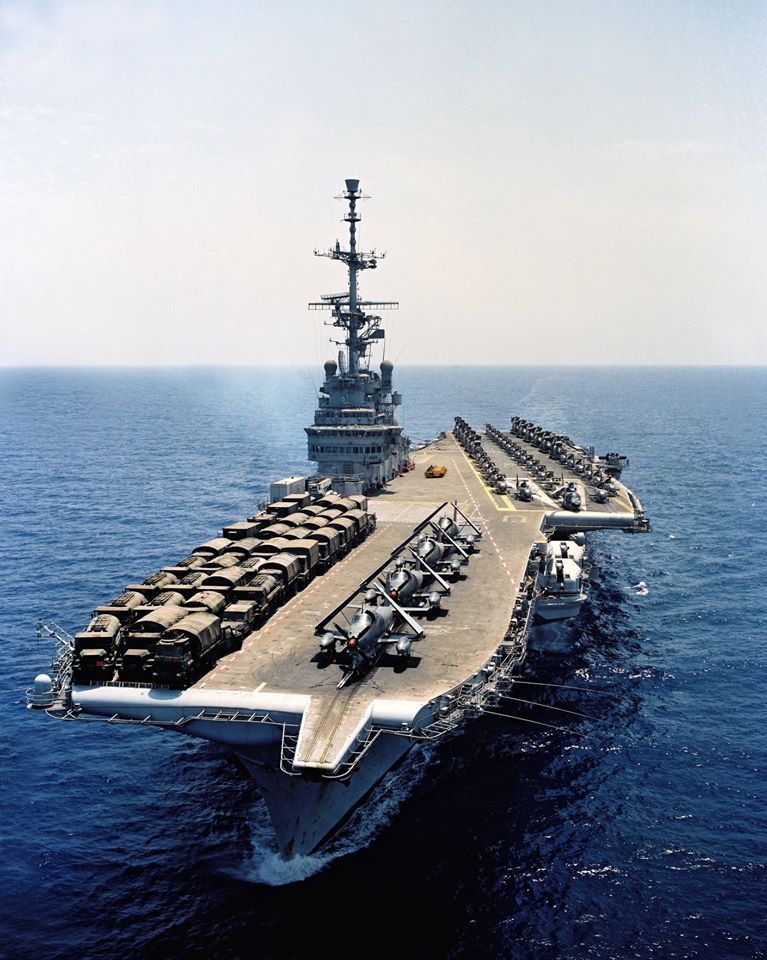 The reason? Saddam, of course.

Commissioned in 1961 as the first of a two-ship class to replace the WWII-era British Colossus-class light carrier Arromanches (R95) [ex-HMS Colossus] and the Independence-class light carriers LaFayette (R94) [ex-USS Langley] and Bois Belleau (R96) [ex-USS Belleau Wood], the Clemenceau-class ships were roughly comparable to an Essex-sized carrier with their 869-foot flight deck.

By the early 1990s, the airwing of Clemenceau and her sister ship Foch (R99) included a mix of 40 or so F-8 Crusader fighters, Super Etendard strike aircraft, Alize sub-busters, and Dauphin helicopters. 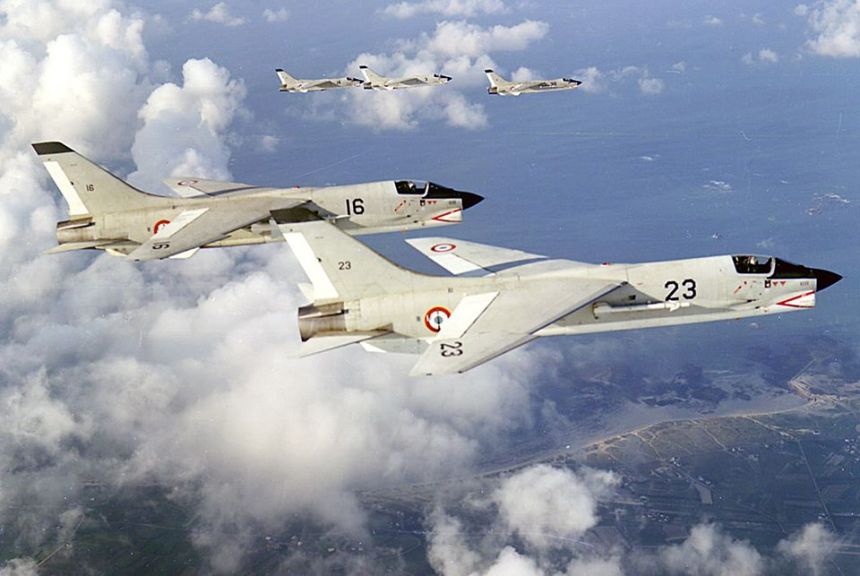 Beautiful French Navy Vought F8 Crusaders. The Aéronavale began fielding 42 modified F8s to replace downright elderly WWII-era F4U Corsairs in 1964, going on to operate them in combat off Djibouti (against Yemeni MiGs), Lebanon, Libya, Bosnia, and Kosovo. France saw their last Crusader flight in December 1999– the final country fielding them– and to their credit has over a dozen of these aircraft preserved in museums around the country. (Photo: Marine Nationale) 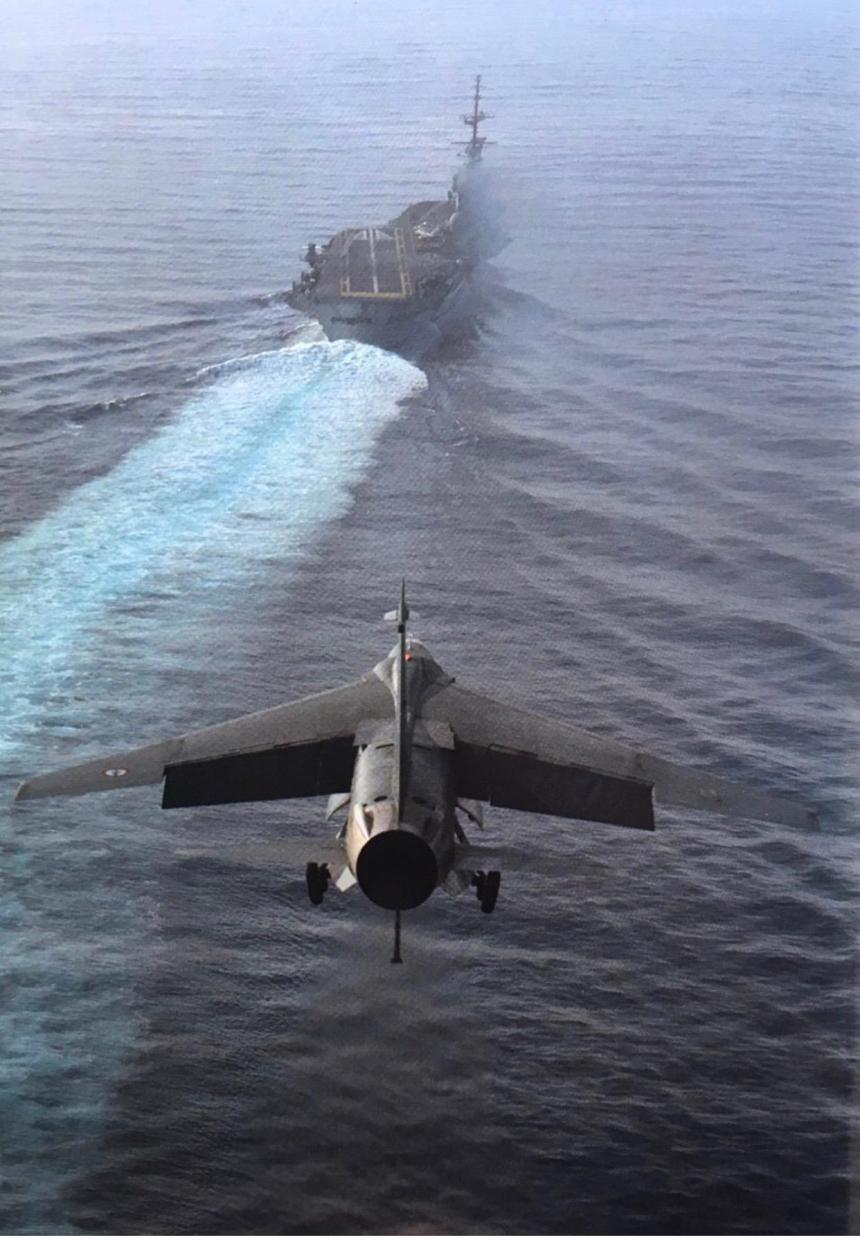 A Vought F-8 Crusader lines up for landing on the French aircraft carrier Foch (R99). Date and location unknown

With their 32-knot max speed, Clemenceau and Foch could also be used as a fast “commando carrier,” transporting French Army troops or Marines and an assortment of Puma, Super Frelon and Alouette helicopters to carry them ashore.

That’s what you kinda see in the top image.

As part of France’s early involvement in the First Gulf War, reacting to Saddam’s occupation of Kuwait, le Clem was ordered to land most of her traditional airwing (save for its Alize and Dauphins) and take on elements of the Force d’Action Rapide to include a reinforced company of the French Foreign Legion’s 1er Régiment, an anti-air detachment (11e RAMa), and a full Army heavy aviation regiment (5e R.H.C.) to include a dozen SA 330B Puma and 30 SA 341/342 Gazelle helicopters. Added to the mix were 80 assorted trucks and combat vehicles. In all, some 800 French troops were embarked.

With escort provided by the cruiser Colbert (C611) and support of the Durance-class replenishment ship Var (A608), the whole thing was put together in 72 hours from the green light and sailed from Toulon as Task Force 623 on 13 August– just 11 days after Saddam crossed the border. 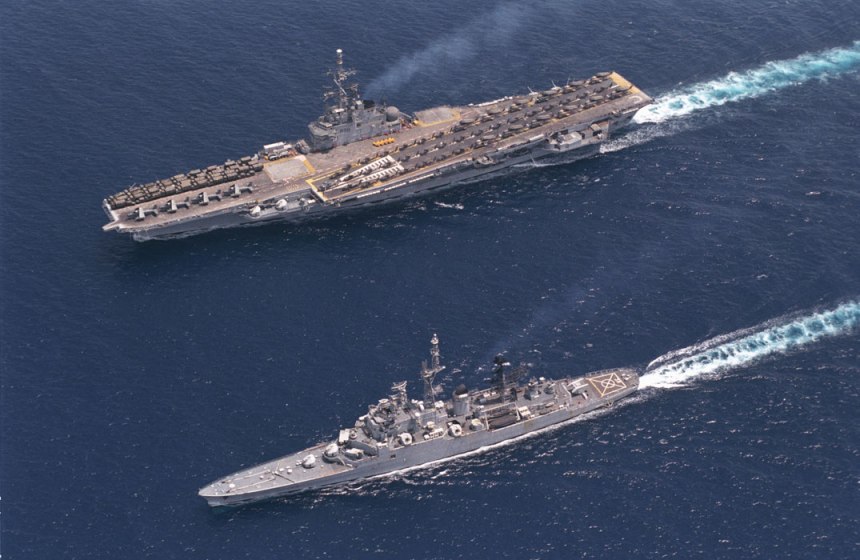 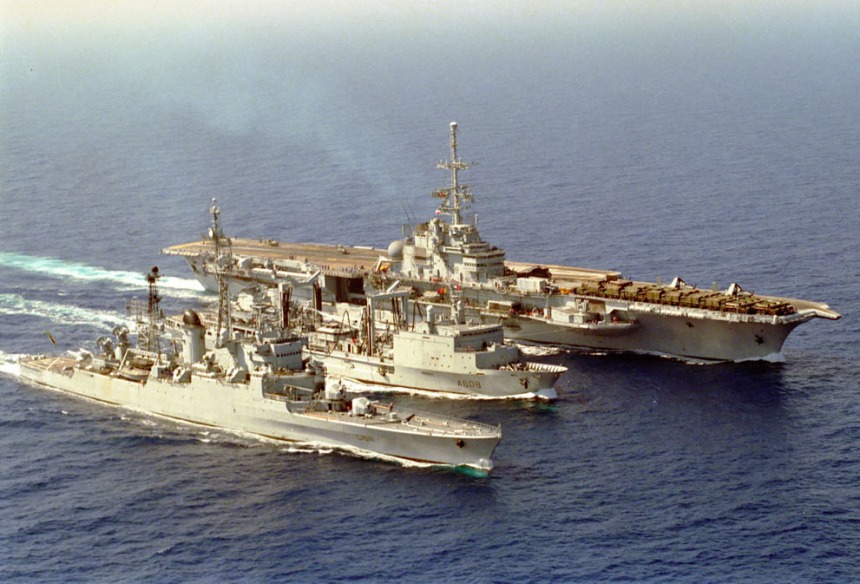 The mission was dubbed Opération Salamandre.

Crossing into the Red Sea via the Suez, the force had a brief stopover in the French colony of Djibouti before making for the Strait of Hormuz, where Gazelles combat-loaded with HOT anti-tank missiles and 20mm cannon stood on alert while Marines with Mistrals kept an eye peeled.

Ultimately, the helicopters and trucks were offloaded at Yanbu in Saudi Arabia and TF 623 remained in the Persian Gulf area until early October, handing over naval operations to the Opération Artimon task force of frigates, as the semi-armored Daguet Division was slowly being built ashore, preparing for action the next year when the Gulf War went from a Shield to a Storm. When Daguet went into action the next February, almost half of the Division’s aircraft had been carried to the theater by le Clem.

Ultimately, Clemenceau went on to have a more lively part in a shooting war with no less than five deployments off the former Yugoslavia from 1993 to 1996– which included having one of her Etendards take a SAM over Bosnia.

She would be decommissioned in 1997 and later partially stripped to provide spare parts for her sister, Foch, which was transferred to Brazil. Le Clem was scrapped in 2010. Salamandre mate Colbert followed in 2016 after spending almost two decades as a museum ship, while Var is still active.