The Treasury-class United States Coast Guard Cutter George W. Campbell (WPG/AGC/WHEC-32) was 327-feet of rock and roll. Entering service on the eve of WWII, she spent the conflict first on the razor edge of FDR’s neutrality patrol, then, once the balloon went up, as a Navy gunboat on the more frozen regions of the North Atlantic, shepherding 19 convoys across the big, U-boat infested waters.

It was on this duty that maritime artist Anton Fischer famously accompanied the ship.

Campbell would end the war as an amphibious warfare command ship in the Pacific then go on to have tours in the Korean War and Vietnam before she was finally dispatched in 1984 in a SINKEX.

After that final mission, the Commandant of the Coast Guard flashed, “The Queen is Dead, Long Live the Queen,” celebrating her 46-year career.

However, this post is about Campbell’s equally famous mascot, Sinbad.

Sinbad of the USCGC Campbell (WPG-32) keeps an eye on the convoy in the North Atlantic with his fellow crewman, circa 1943 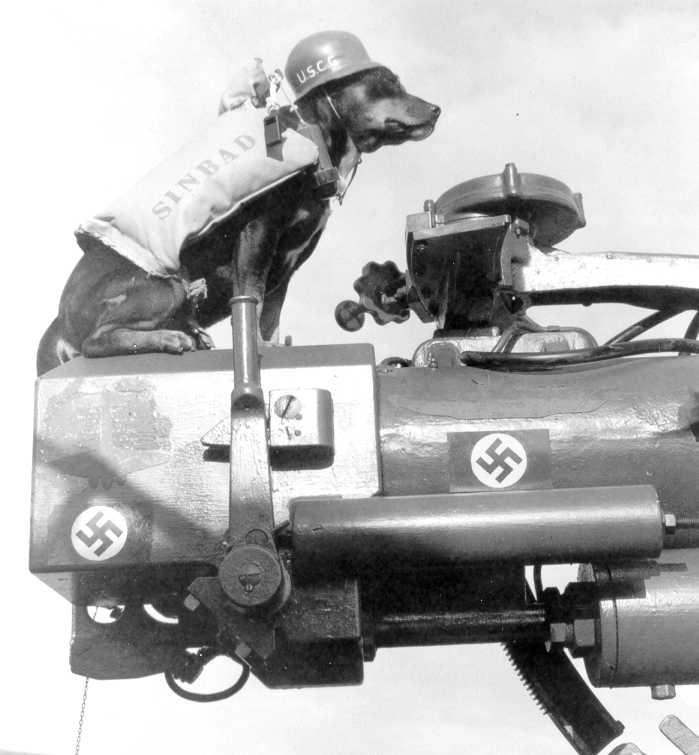 As detailed by the USCGC’s Historian’s Office:

The crew of the Coast Guard cutter Campbell adopted a mixed-breed puppy in 1938. Little did they know that their canine companion would become a world-famous Coast Guard veteran. He was, literally, a member of the crew, complete with all the necessary enlistment forms and other official paperwork, uniforms, and his own bunk. He sailed on board the combat-tested cutter through World War II and saw much action, both at sea and in port.

As Life Magazine reported: “An Old Sea Dog Has Favorite Bars and Plenty of Girls in Every Port.” Until recently he had the honor and distinction of being the only Coast Guardsman to be the subject of a biography! It was Sinbad of the Coast Guard, written by Chief Specialist George R. Foley, USCGR and published by Dodd, Mead and Company of New York during the war. The book made him an international celebrity.

Sinbad was a common figure in recruiting-centered advertising during WWII.

Sinbad, who was aboard when Campbell fought U-606 on her convoy duty, was also kinda squirrely and got in trouble a lot. For instance, he was ashore on liberty one night in Southern Greenland and created quite a ruckus by chasing the residents’ sheep around the country-side. Sinbad was then duly masted and banished from shore leave in Greenland for the remainder of his days:

“Sinbad is a salty sailor but he’s not a good sailor. He’ll never rate gold hashmarks nor Good Conduct Medals. He’s been on report several times and he’s raised hell in a number of ports. On a few occasions, he has embarrassed the United States Government by creating disturbances in foreign zones. Perhaps that’s why Coast Guardsmen love Sinbad, he’s as bad as the worst and as good as the best of us.”

The old USCGC Campbell‘s name was recycled some 30 years ago in a 270-foot Famous-Class cutter homeported in Kittery, Maine. While she has had her own run-ins with a different kind of submarine in recent years.

A bronze Sinbad holds a place of honor over the cutter’s mess.

Returning to her namesake’s stomping grounds, the current Campbell recently operated in conjunction with the Danish Navy in Greenland’s waters. 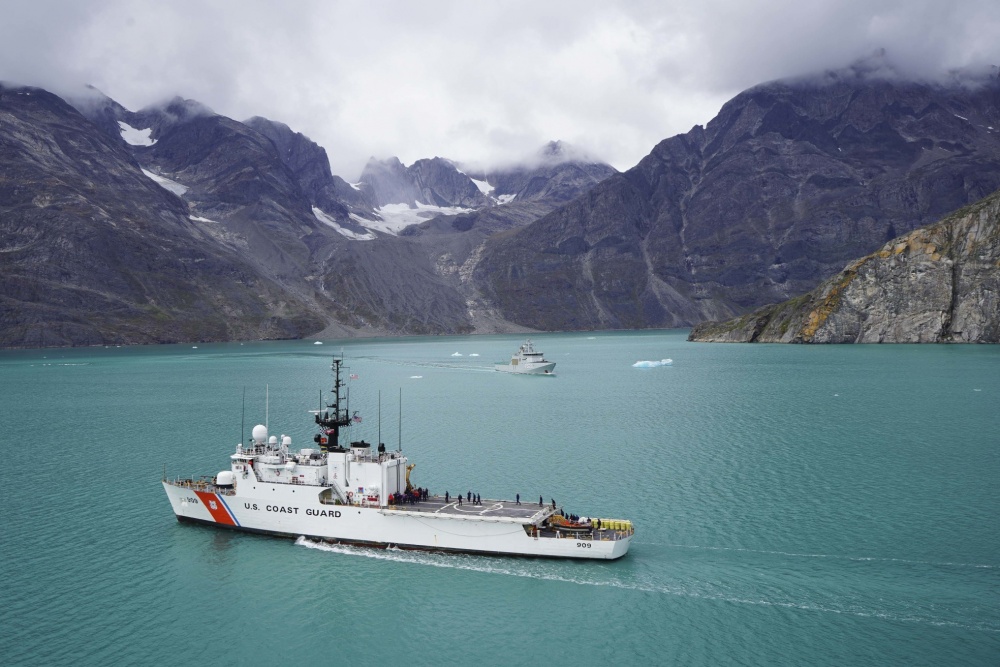 USCGC CAMPBELL transited south along the west coast of Greenland overnight with the HDMS KNUD RASMUSSEN and rendezvoused in a position just offshore of Evighedsfjorden (Eternity Fjord). CAMPBELL received KNUD’s Executive Officer, Commander Bo Ougaard, on board to serve as an ice pilot and provide local knowledge to assist CAMPBELL in safely entering and transiting Evighedsfjorden. Once inside Eternity Fjord, CAMPBELL launched her MH-65 Dolphin aircraft and proceeded up the fjord to the head where the glacier begins. (Photo by Seaman Kate Kilroy)

While in Greenland, they also took Sinbad ashore, with the Chiefs taking him drinking at a local dive.

As noted by Campbell’s goat locker:

Our Chief Petty Officers (the only ones allowed to touch the bronze Sinbad statue on our messdeck) brought Sinbad ashore in Nuuk, Greenland, for his return today. It’s good to see Sinbad back in Greenland again!