May the 4th, Sternenkrieger style

For those of you who are Star Wars fans, May the 4th be with you today!

The below is a different take on the more historic term of “German stormtroopers,” showing a Star Wars reenactment group with several generations of Imperial troops (and a token Jawa) accompanying Lord Vader arrayed before of a “real steel” Bundeswehr Schützenpanzer (SPz) Puma fighting vehicle.

Of note, the Germans refer to the Star Wars franchise’s Stormtroopers not with the1917-era term Stoßtruppen, which has negative connotations in modern Germany due to its later use by the little Austrian and his black-uniformed crew, but instead as Sternenkrieger, which translates roughly as “star warriors.”

The term is also the title of the German-language translation of Robert Heinlein’s Starship Troopers.

The more you know…

The German Army has been steady in retiring armored units since the Cold War thawed in 1991, shrinking from some 4,000 Leopards holding the Fulda gap to just two active Panzerbrigades and a paltry 225 Leopard 2A4 and 2A6 tanks backed up by a similar number of Marder, Puma and Boxer armored vehicles by 2016. Since then, they have moved to increase those numbers to a planned 320 tanks and (slowly) update their big cats to the 2A7V standard.

With that, the Bundeswehr announced on 27 November that Panzerbataillon 363 will be stood up, equipped with 44 Leopards, and based at Hardheim, Baden-Württemberg. PzBtl 363 was a former West German Heer unit that was established at Böblingen in 1963 and disbanded 30 October 2006. Now, after 13 years with their colors furled, they will be reborn.

Notably, the WWII Wehrmacht fielded heavy tank battalions that all used a numbering sequence in the 500s (PzAbt 501 to 511), meaning the FGR’s PzBtl 363 had no Nazi-era lineage. However, there was a short-lived Panzerjäger-Abteilung 363 as part of the 363rd Volksgrenadier Division which was destroyed in the Ruhr Pocket in April 1945,  but of course, a panzerjäger battalion is not a panzer battalion proper.

(Above, a Bundeswehr film posted this week of a Leopard 2A6 of 4./Panzerbataillon 104)

Germany has begun the process of upgrading 103 [or 104] out-of-service Leopard 2A4 and 2A6 tanks to the latest model, the Leopard 2A7V—an upgrade that will cost the state the equivalent of 760 million euros ($833 million). The big news is that by revamping and deploying these new vehicles, the Bundeswehr is expanding its tank fleet by over 40 percent, from 225 to 320 main battle tanks.

As noted by Defense News, this is in addition to another 32 tank chassis frames that will be used for bridging and recovery vehicles. More on the MBTs:

All told, the Bundeswehr stands to get 104 used Leopard 2 battle tanks out of storage that manufacturer Krauss-Maffei Wegmann will upgrade under a contract with the German Defence Ministry from the A4 configuration to the newest A7V standard. The latest package includes improvements in the areas of information technology, armaments and armor.

Times have changed, as a May 8 statement from the acquisition arm of the German Defence Ministry noted.
“The geopolitical developments of the past years have emphasized to us the importance of tank technology for our defense capabilities,” officials wrote.

Of course, the increase is paltry compared to the Germans pre-1989.

Back in the 1980s, the West German Bundeswehr was a massive roadblock to the Warsaw Pact hordes coming through the Fulda Gap. Established on the 200th birthday of Scharnhorst on 12 November 1955, the force used largely Allied equipment and Nazi-era officers, but within a generation, both were replaced by some of the newest and most forward-thinking leaders and gear in the World. German Leopard tanks were (and Model 2A7s today still are) seen as perhaps the most deadly armored vehicle in Europe.

At the height of the Cold War, when fully mobilized, the Bundeswehr could count on nearly a million men under arms and some 4,000 Leopards to hold the gap.

Then came the great melting of the Berlin Wall, reunification with the East, and a general downsizing of the ‘Heer over the past 25 years. Now, the 60,000-strong German Army has but two active Panzerbrigades and 225 Leopards of all types backed up by an equal number of Puma and Boxer armored vehicles. The to 320, all things considered, is not something old Scharnhorst would boast too much about.

The modern U.S. Army’s flirtation with dedicated sniper rifles is now in about it’s 99th year, if you disregard the brief fling with the Sharps used by Hiram Berdan’s United States Sharpshooters during the Civil War. Over that time, Big Green kept the same more or less standard rifle in service for decades: The M1903 in both World Wars, the M1C/D  in Korea, the M21 in Vietnam (augmented by a few Winchester Model 70 and Remington 700 target guns pressed into sevice).

In the 1980s, the Army went with a supped up Remmy 700 heavy barrel, designated the M24, and has been using it for roughly the past 30~ years, being augmented by the remaining M21/DMRs and some new AR-10-based Knights Armarment M110 semi-autos in recent years.

Well, now it seems that is about to change as a $44 million contract was announced Friday to Heckler & Koch Defense Inc. for up to 3,673 Compact Semi-Automatic Sniper System (CSASS) units along with spares, accessories and support. This works out to about $12,000 per rifle system, which sounds like a lot but if it includes optics, et. al may actually be a bargain.

The good folks over at The Firearm Blog talk about the HK in question– the G28E.

The CSASS program aimed to address issues of size and length with the original SASS program that was won by Knight’s Armament Company in 2005, resulting in the M110. The CSASS solicitation appears to combine the concept of a carbine-length 7.62mm semiautomatic support weapon adopted by the British Army and New Zealand Defence Forces with the optionally suppressed flexibility of the original M110 SASS weapon.

The G28E is based on Heckler & Koch’s G28 designated marksman’s rifle designed for the Bundeswehr, itself in turn based on the HK 417 7.62 caliber bigger brother to the HK 416. The G28E incorporates a large, lightweight octagonal KeyMod-like rail with seven sets of mounting positions for attachment of rail segments and accessories.

Now the Army currently has about 15,000 precision rifles of all types (M21/M110/M24) and just dropped some serious skrilla on 2,520 revamped .300 Win Mag caliber M24s, dubbed the M2010 Enhanced Sniper Rifle in 2014 so it’s doubtful the new HK rifle will make a clean sweep of the service’s needs, but I could see the lingering Vietnam-era M21 and its DMR’d M14 cousins finally being put to pasture while the M24s/2010s/110s head to Guard and Reserve units.

Plagued with issues (mainly exceptionally poor accuracy past 100m when operating in temperatures over 80 degrees), the German Bundeswehr is moving to scrap their entire 178,000 rifle stockpile of HK G36s– but are chalking it up to the age of the guns although they were acquired in 1996.

“The G36 was procured with a service life of 20 years in mind, which will be reached in 2016. Furthermore, the current forces’ requirements by far exceed the potential of modifications that could be made to the G36,” said Katrin Suder, German State Secretary for Defence Procurement, as noted by Janes.

Maybe the Germans can donate them to a country or three that doesn’t send a lot of people to the sandbox. Perhaps the Baltics. As long as the Russians don’t invade in August they should be good.

Back in the 1980s, the West German Bundeswehr was a massive roadblock to the Warsaw Pact hordes coming through the Fulda Gap. Established on the 200th birthday of Scharnhorst on 12 November 1955, the force used largely Allied equipment and Nazi-era officers, but within a generation, both were replaced by some of the newest and most forward thinking leaders and gear in the World. German Leopard tanks were (and Model 2A7s today still are) seen as perhaps the most deadly armored vehicle in Europe. 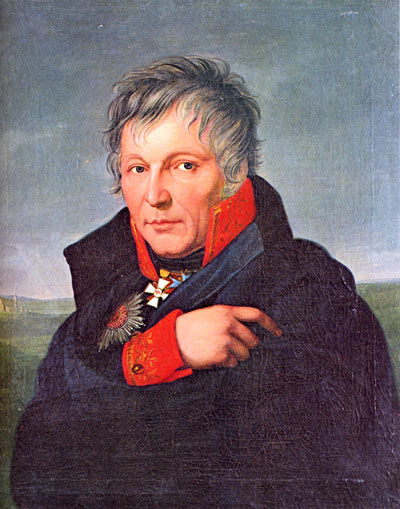 Gerhard von Scharnhorst, 1755–1813, Chief of the Prussian General Staff and later one of Napoleon’s greatest thorns.

At the height of the Cold War, when fully mobilized, the Bundeswehr could count on nearly a million men under arms and some 4,000 Leopards to hold the gap.

Then came the great melting of the Berlin Wall, reunification with the East, and a general downsizing of the ‘Heer over the past 25 years.

Now, the 60,000-strong German Army has but two active Panzerbrigades and 225 Leopards of all types backed up by an equal number of Puma and Boxer armored vehicles.

And even this corps is struggling. 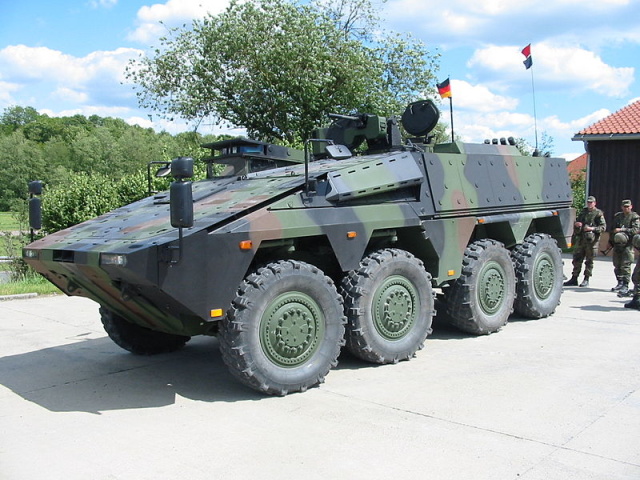 The very Stryker-ish German GTK Boxer. The Heer is buying 250~ of these to replace the vintage Fuchs APCs. Hopefully, they will come standard with machine guns.

As reported by both German and English sources on the “tip of the spear” of German rapid response forces:

“Late last year, as the German Bundeswehr was considering rebooting its expensive, failed Euro Hawk drone program, the army of the country with the fourth largest economy in the world fielded its newest armored vehicles in a major military exercise in Norway with broomsticks painted black and lashed in place of missing machine gun barrels. That detail was part of a German Defense Ministry report leaked to Germany’s public television network ARD that exposed widespread shortages of basic combat equipment.

According to the report, the Bundeswehr units deployed as part of a test of NATO’s Rapid Response Force in September were far from combat-ready: they deployed with less than a quarter of the night vision gear required. The units were also missing 41 percent of the P8 pistols and 31 percent of the MG3 man-portable machine guns they were supposed to deploy with. And none of the GTK Boxer armored vehicles that deployed were equipped with their primary armament—the 12.7 mm M3M heavy machine gun.”

Scharnhorst is truly rolling in his grave