I dropped by FN’s booth at SHOT Show in Las Vegas this week to get the scoop on the new FN High Power pistol line.

Not just a restart of the old FN/Browning Hi-Power, the new 9mm guns have a 21st-century flair to them, with a 17+1 magazine capacity, ambi controls, texturing on the frame, better ergonomics, and FN 509-pattern dovetail sights. They will be available in three variants including the standard black model, one in FDE– sure to be a hit with modern FN owners who collect that genre– and a true stainless steel model.

Each will ship with two sets of grips.

After taking a half-decade off, FN has Re-entered the Hi-Power Game

FN America on Tuesday announced they are returning to the Hi-Power market in force with a new generation of 9mm pistols in three different variants.

FN was the initial maker of the classic last handgun design conceived by John Moses Browning and realized by Dieudonné Saive, the latter the father of the FN 1949 and FN FAL. The company ended the line in 2017 and others have gone on to clone the iconic 9mm.

To set the record straight, FN has returned the Hi-Power/High Power to production in an updated format with improved internals, a modern barrel lockup, a 17+1 flush-fit magazine capacity, and the ability to run hollow points. 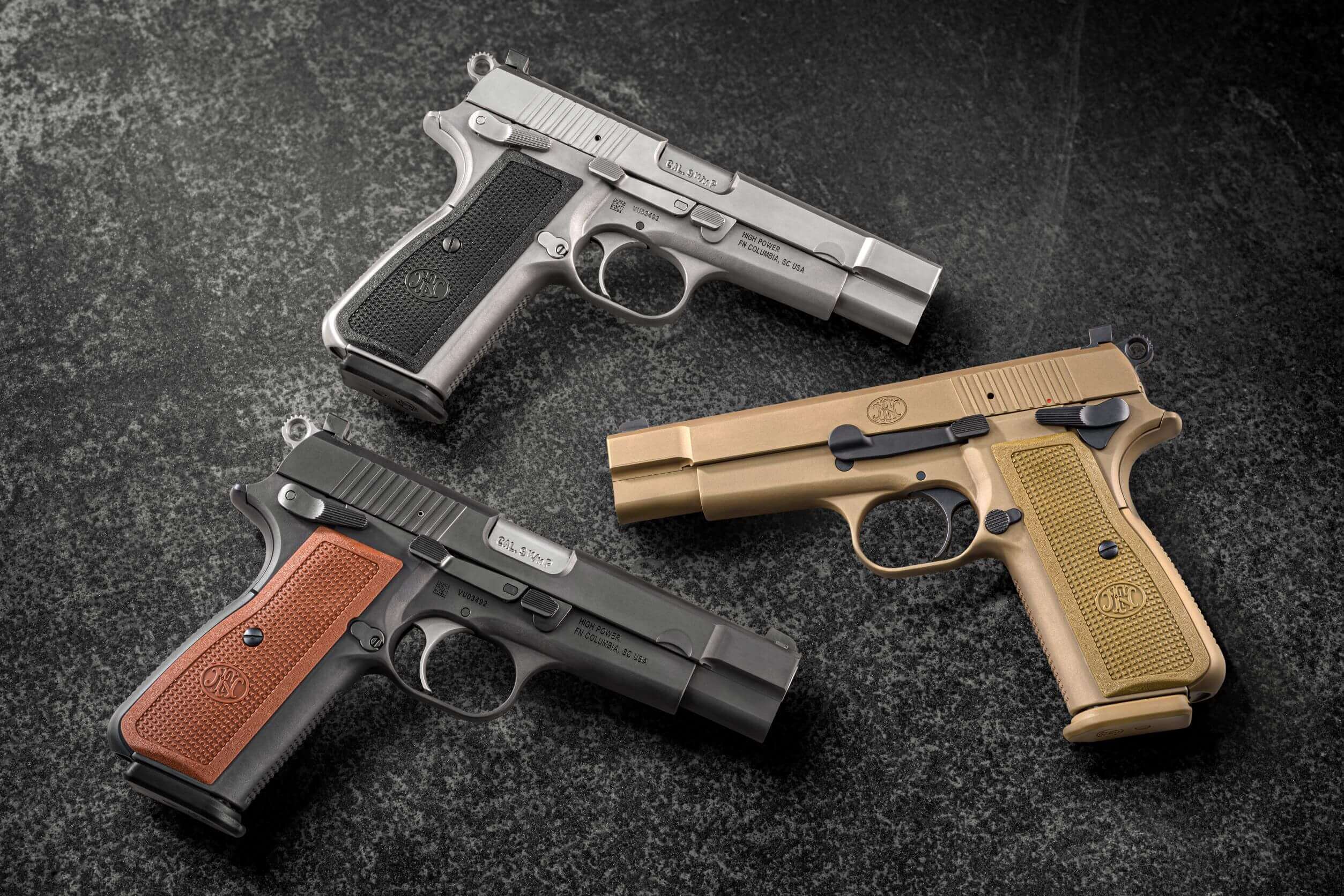 Featuring ambidextrous controls and the elimination of the oft-detested magazine disconnect, the new High Power is available in stainless, FDE, and black finishes, retaining a single-action trigger that breaks crisply and cleanly.

Whelp, looks like the SA-35 is the Hi-Power FN *Should have* made

I dig FN. Not even gonna lie. I probably have 15 FN-made handguns and rifles in my collection, including three generationally different Hi-Powers. My first EDC, back in the early 1990s, was a Hi-Power. Probably only two people bought the SFS version, one of them being me. I even owned a factory two-toned .40S&W variant briefly before I realized that I made a horrible mistake and traded it away.

But FN stopped production of the gun in 2017, after slowly declining their emphasis on the model for two decades prior. In short, I think they just fell out of love with it and the catalog can only be so big.

On the flip side of that, I am not a Springfield Armory fan.

Other than the Omega (a German-import 10mm) and a few of their latter model Operator, TRP, and Ronin models of the M1911A1, I never really found a Springer that I had more than a passing interest in.

I mean look at this thing:

I’ve been kicking one around for a couple weeks and have some feedback on just where it fits in the Hi-Power evolutionary chart, and where it has some improvements that FN should have done and kept the gun in production.

One of these things is not like the other…

The Springer Hi-Power may just live up to the Hype

Springfield Armory kinda broke the gun internet a week ago when they introduced their new take on the classic Hi-Power (GP-35) design of John Moses Browning and his Belgian understudy, Dieudonné Saive. While the gun looked great in early photos, and promised lots of minor improvements (no magazine cutoff with a resulting better trigger, a beveled magwell, 15-shot MecGar mags, user-replaceable combat sights, a redesigned hammer to curb hammer bite, and an extended safety lever) people were still skeptical because, well, SA has kind of a reputation some times.

Well, I just got one in over the weekend for T&E and, on initial impressions, this gun looks and feels great.

Now that is a pretty gun, and Springfield says it is made in America. (Photo: Chris Eger/Guns.com)

The mags (both vintage milsurp and new MecGars) drop free. It has an excellent trigger. Great build quality and fitment. I am really impressed.

Plus, it has an MSRP of $699, which should translate to a local gun store price in the $599ish area. Never mind the fact that they are going for twice that on Gun Broker right now.

Anyway, expect a few updates as I take a closer look at the new SA35 and head to the range later in the week.

Springfield Armory of all folks is bringing the Hi-Power Back

Springfield Armory has delivered on rumors of a return of one of the world’s most iconic firearms, John Browning’s P-35 series pistol.

The newest version of the Hi-Power-style double-stack 9mm handgun, the Springfield Armory SA-35, seems like it stepped right out of the golden age of circa 1960s T- and C-series Brownings, but it only seems that way. While still showing off the vintage “wood and steel” look of mid-century commercial series guns, Springfield’s chapter in the firearm’s history has subtle upgraded enhancements that give a nod to more contemporary defensive pistols.

I’m not gonna lie, I have never been a Springfield Armory fan– although I know people who love their stuff– but I am looking seriously at the SA-35– and FN/Browning really screwed the pooch by ending the Hi-Power line in 2018. 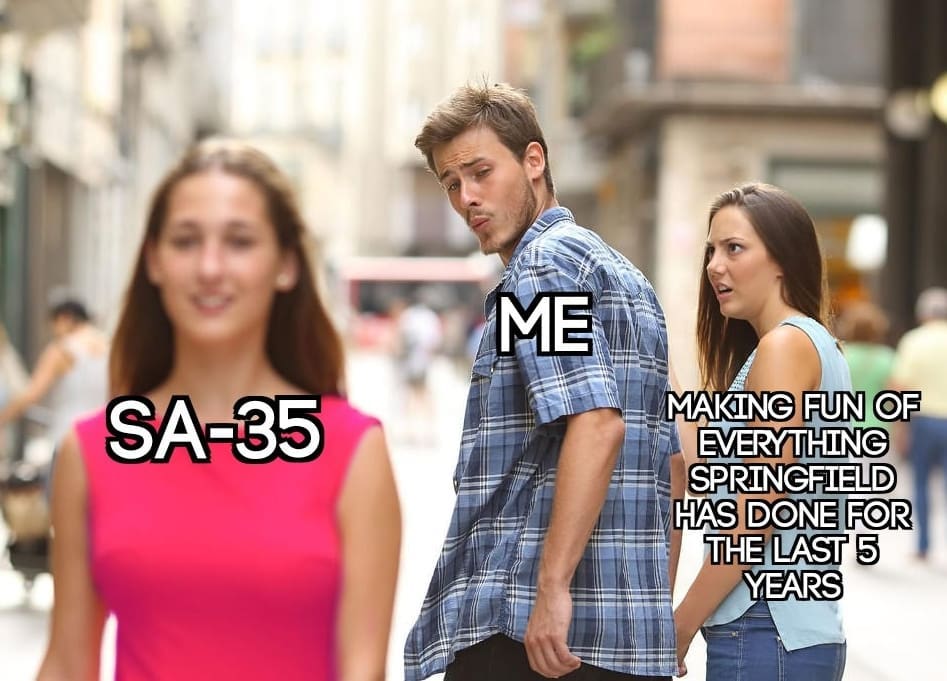 Canada and the Everlasting Inglis Hi-Power

The Canadian government is reportedly moving forward with a plan to replace its military’s downright vintage Browning Hi-Power pistols.

Local media in Ottawa, the country’s capital, are advising that a contract for as many as 20,000 “modular pistols” will be issued later this year for the Canadian Army, Royal Canadian Air Force, and military police. The guns will replace Canadian-produced Inglis Brownings made during World War II.

As a guy who has a few FN/Browning Hi-Powers, ranging from a circa 1943 Pistole 640b to a downright wonky circa 2005 SFS, I had fun examining a wide range of BHPs recently.

This rare late 1940s-produced Hi-Power is a very early model featuring the “dimple” on the right side of the slide to help with take down for maintenance and the “thumbprint” style internal extractor. Marked “LGK OO”: Landes Gendarmerie Kommando für Oberösterreich (Provincial Gendarmerie Command for Upper Austria), it is a former Austrian police-issue handgun.

This circa-1969 commercial Browning Hi-Power still features the original wooden grips that the model first entered production with but shows the updated external extractor. Also gone is the slide/frame dimple.

More detail in my column at Guns.com. 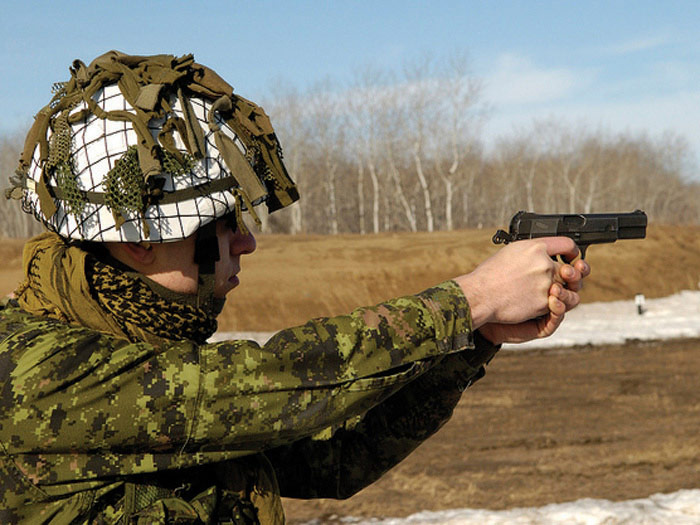 Designed just before the outbreak of World War II by FN in Belgium, the factory that made the Hi-Power was repurposed in 1940 after the Germans occupied the country and production started back up to provide the handy 9mm pistols to Hitler’s legions.

However, the Allies soon started making the 13-shot semi-auto in Canada, manufactured in Toronto, by John Inglis and Company with a little help from Dieudonné Saive, the Belgian firearms engineer who helped design the gun in the first place.

The Canadian-made Browning-Inglis 9mm has been iconic to the country’s military since World War II, but they may soon get a much-needed replacement.