There will soon be some milsurp U.S. Army M17s in the wild

Sig Sauer has a small number of military surplus M17 pistols that have seen varying degrees of genuine field use and is passing them on to collectors.

As explained by Sig, the guns were early military models with coyote tan surface controls. Since then, the M17 has been updated to black controls and the Army arranged to return those early guns to Sig for new ones. The now-surplus guns still have government control numbers and have seen a mix of action, with some pistols saltier than others.

Sig says these guns were previously fielded by the U.S. Army and their condition will vary, “making each one uniquely different, and making this truly an opportunity to own a piece of history.” (Photo: Sig)

New Hampshire-based Sig Sauer announced last week that they have reached a milestone in delivering new pistols to the U.S. Armed Forces.

Since winning the contentious Modular Handgun System contract in 2017, beating out big-name pistol makers from around the globe to replace the M9 Beretta, Sig has exceeded performance standards and recently delivered the 100,000th MHS series gun to the military.

Over the coming five-to-seven years, upwards of 350,000 handguns and 100 million rounds of ammunition are scheduled for delivery to the Pentagon.

Air Force getting in on the M18 game

The U.S. Air Force is rolling out the new Sig Sauer M18 pistol to Security Forces units. The 9mm handgun — the smaller counterpart to the M17 adopted under the Army’s Modular Handgun System contract — replaces the Beretta M9, which has been in service since 1986.

A variant of the Sig Sauer P320 with a number of upgrades to include a coyote-tan PVD coated stainless steel slide and a removable top plate for optics, the more compact M18 can use a 17-round 9mm flush fit or 21-round extended magazine.

Importantly in USAF service, the gun will replace not only the M9 Beretta but also the M11– Sig P228s used by SOI– and old M15 S&W .38s used to fire blanks in military working dog training.

Sig is doing well with their M17, and really wants the public in on the act

The gun ships in the same basic vanilla cardboard packaging used in the military’s contract and comes with two extended 21-round magazines and one flush-fit 17-round magazine. They come standard with a SIGLITE front night sight and removable Night Sight rear plate while the pistol uses a coyote-tan PVD coated stainless steel slide with coyote-tan colored controls.

Once the warranty is registered with Sig, the owner gets a commemorative challenge coin and certificate that matches their pistol’s serial number.

Although it ships in plan cardboard, just as Uncle get it, Sig also sells an optional cherry-wood M17 Collector’s Case for $199 that includes laser placement cuts for the pistol, coin, and certificate. (Photo: Sig)

More on the M17 (which they are also selling in a strictly commercial variant for about $750) in my column at Guns.com.

Looks like the Army is rolling Safariland deep on new holsters

It increasingly looks like the Army’s solid choice for their M17 Modular Handgun System is Safariland’s Level III 7TS holster, as evidenced by a $49 million contract that bubbled up last week.

Funny that Safariland shows it with a Glock…

An active retention holster that is a lot more complicated to work than the old leather flap holsters and the Bianchi UM84s of the Beretta-era, the Army has been flirting with the 7TS for a minute, and issue it with the M9 currently for MP use. On the bright side, your gun is a whole lot less likely to fall out in one of these, although there is a -distinct- learning curve in getting it dialed in.

In other news, Uncle is also ordering smaller quantities of IWB light-bearing holster from a Florida company that I am talking to for more info. It seems they are for the more compact M18 version of the MHS and the first users are at Bragg. Watch this space.

Everyone loves the M17 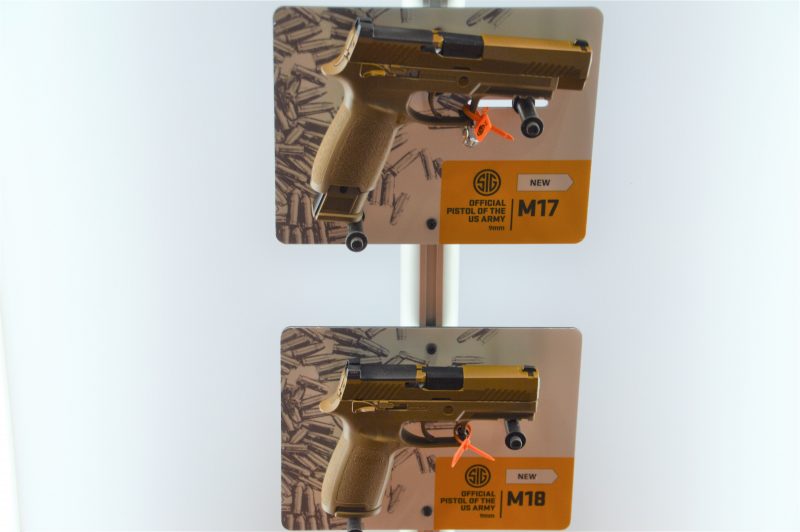 All branches of the U.S. Armed Forces have placed orders for the M17/18 Modular Handgun System according to Sig Sauer. (Photo: Chris Eger)

Though originally a winner for an Army contract, Sig officials report that every branch including the Coast Guard has placed orders for the modified P320 pistol platform.

Sig’s M17/18 pistol, the winner of the Army’s Modular Handgun System contract last year, is set to be fielded by not only the land service but the Air Force, Marines and Navy as well as the Coast Guard, according to company representatives.

The handguns will begin replacing a host of other platforms, including various marks of the M9 Beretta in the Army. As noted in the Navy’s FY 2019 procurement budget justification for the Marine Corps, 35,000 of the Sigs will not only replace M9s but also Colt M45A1 CQB .45ACP pistols and the newly acquired M007 Glock. In Coast Guard service, the gun will augment the Sig P229R which was adopted in 2005. The Air Force has been quietly acquiring the guns and testing their use for compatibility with aircraft ejection seats.

Why the Army’s new pistol has a top plate, and why that’s a big deal

In the above video shot by my homie Ben Philippi, Sig’s Rich Morovitz talked to us at SHOT Show about the U.S. Army’s new M17 sidearm and points out some of the differences between the military’s variant and winner of the landmark Modular Handgun System contract and the standard Sig Sauer P320. Besides the manual safety– an Army requirement– Morovitz also goes into detail on the removable top plate for a Leupold DeltaPoint Pro sight, which is a big move for a MIL-STD handgun meant for the common Soldier in the field.

More info if you are curious here.

Air Force getting the drop on the M17

The flying service, which is purchasing 130,000 of the new Sig P320 variants, is testing the Army’s Modular Handgun System’s capability to resist damage during the demanding act of ejecting from a moving aircraft.

The Air Force released a number of images of the MHS contract winner, designated the M17 by the military, undergoing testing at a facility at Wright-Patterson Air Force Base, Ohio, earlier this month. The photos show a full-scale anthropomorphic dummy clad in a survival vest and flight gear strapped to a simulated stand-mounted ejection seat. On the dummy’s chest are a pair of M17 pistols, one oriented for a left-hand draw, another for a right, alternating flush-fit and extended magazines.

With the Army’s Modular Handgun System contract now firmly in the hands of Sig Sauer, images of Glock’s entry for the M17 and M18 pistol have emerged and they have a number of differences from their standard offerings.

These include a lanyard ring at the bottom of the grip, black ambi surface controls, a lack of finger grooves, a manual thumb safety, extended mags, and a flat dark earth finish. The models offered outwardly seem like otherwise variants of the Gen 4 G19 in 9mm and G23 in .40S&W. Not pictured are threaded barrels, a contract requirement, or ammunition, which was provided by Federal. 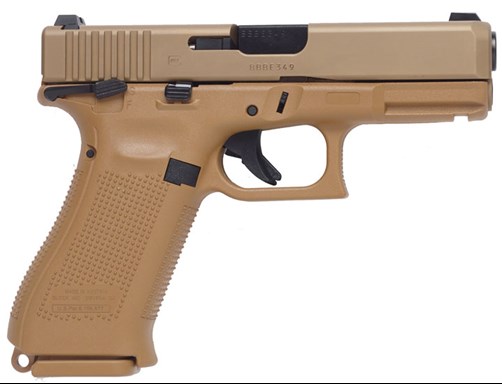 The Government Accountability Office on Friday released the detailed decision on a contract protest by Glock over the Army’s selection for the Modular Handgun System contract.

The 17-page decision chronicled the Army’s efforts between August 2015 and August 2016 when the field of nine proposals from five companies was reduced to an offering by Glock and another, ultimately winning bid, by Sig Sauer. The difference between the two bids was a staggering $100 million.

The M17 comes in a full size (with extended mag) variant and a more compact model, below, to replace both the M9 and M11

Glock on the other hand was a lot higher.