Getting your lean on

Born in Pascagoula, the class leader of the 418-foot Legend-class National Security Cutters, USCGC Bertholf (WMSL-750), joined the fleet in 2008 and since then, nine of the ships have replaced the circa 1960s 378-foot Hamilton-class high endurance cutters in the Coast Guard’s inventory. The service uses these light frigate-sized vessels in overseas deployments to the Med and West Pac, as well as in patrols of the North Pac– monitoring 900,000 square miles of the U.S. exclusive economic zone off the Alaskan coast– which can be demanding.

Bertholf made it safely to Kodiak, AK last week. During our transit, we encountered 15ft seas, 50kt winds, and 35-degree rolls. 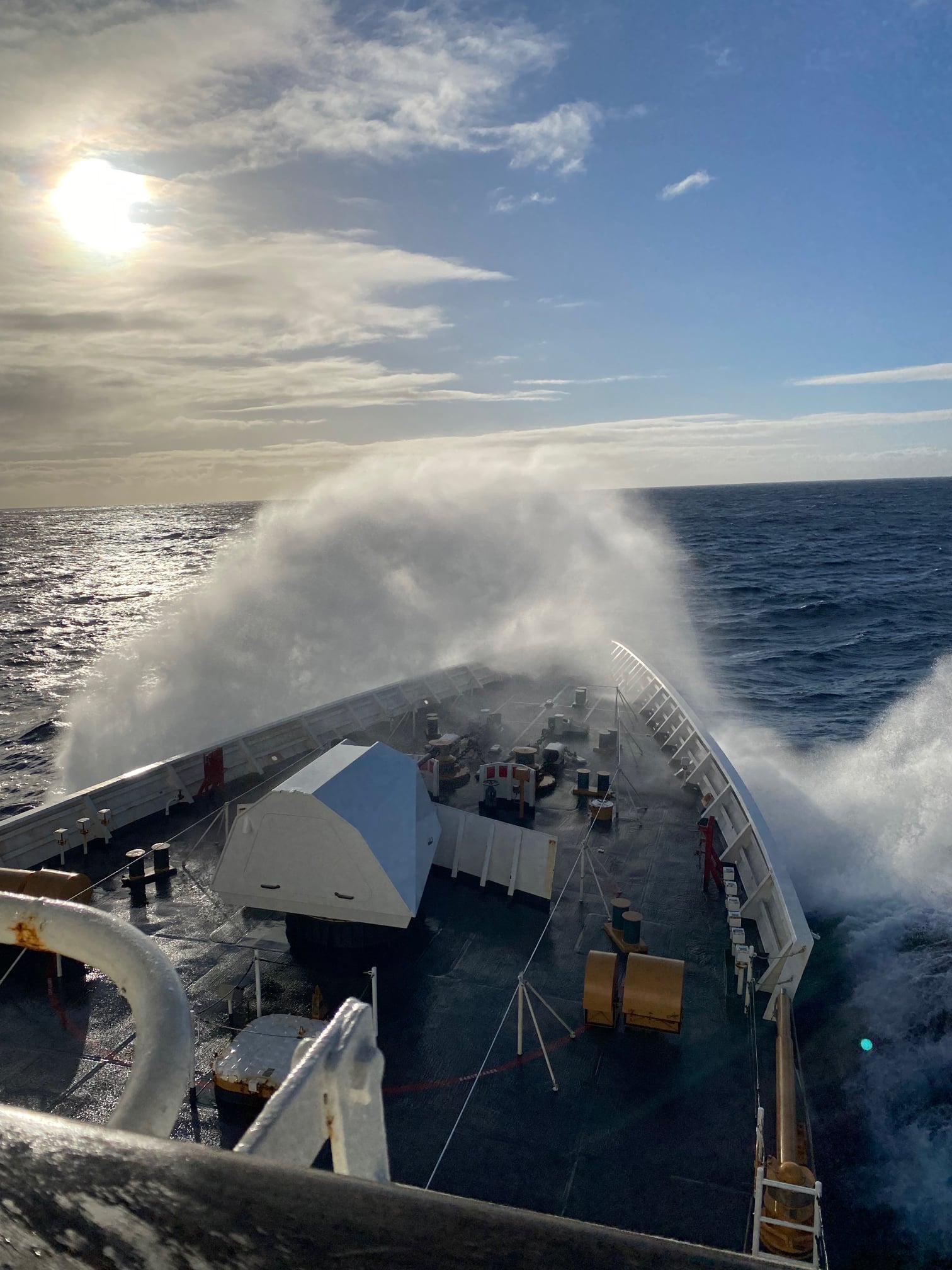 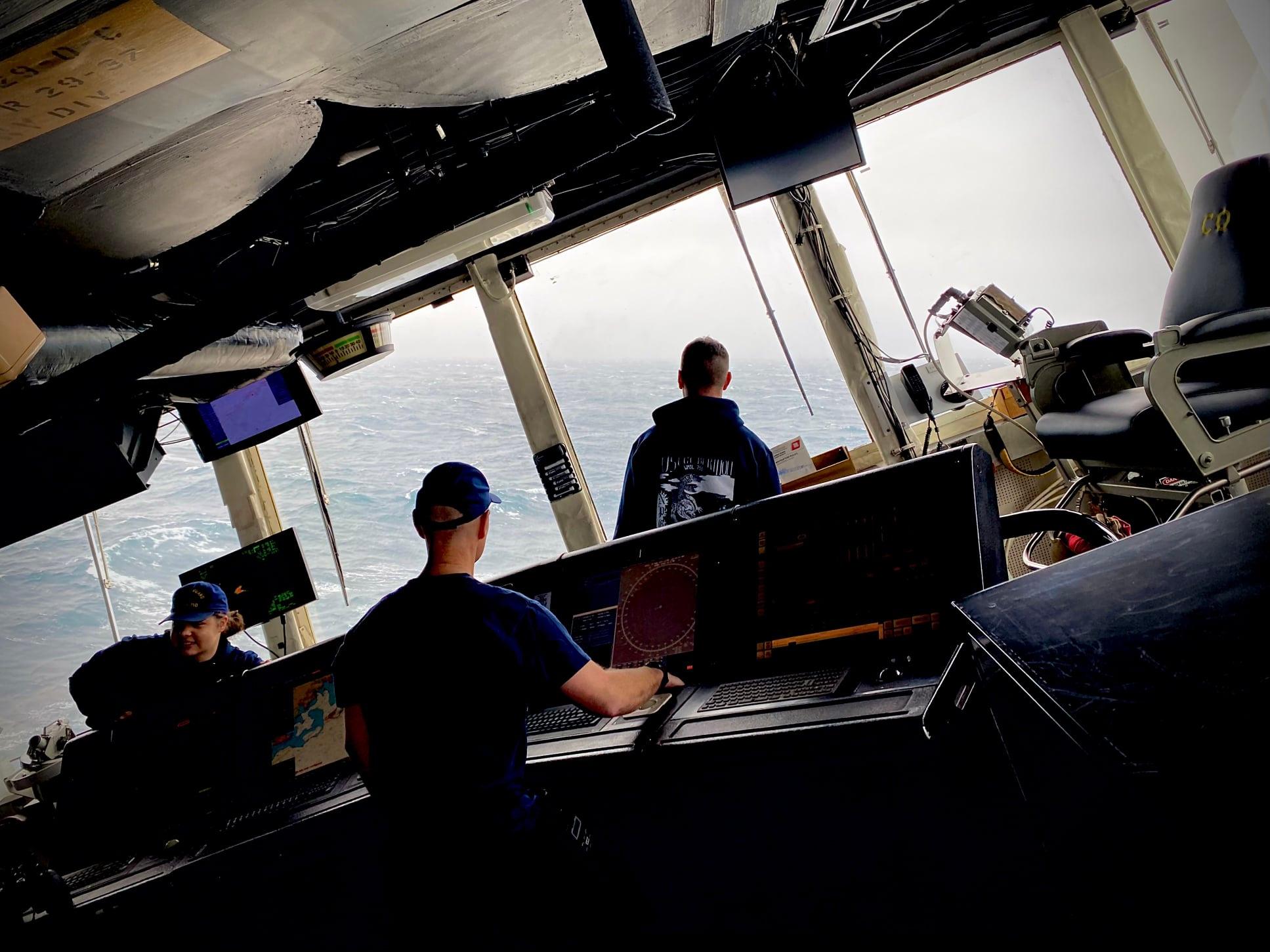 Last September, Berthof and her sistership and Kimball (WMSL-756) kept tabs on a four-ship task force from the People’s Liberation Army Navy (PLAN) operating as close as 46 miles off the Aleutian Island coast.

In other National Security Cutter news, shipbuilders at Ingalls just completed the longest translation on record for the shipyard with future USCGC Calhoun (WMSL 759) before officially launching the ship into the water in Pascagoula.

In November of 2020, the ninth NSC, Stone (WMSL 758)— named after the service’s famed first aviator— was delivered to the Coast Guard and proceeded to conduct an unprecedented 68-day shakedown patrol, which resulted in a drug bust within two weeks of sail away and an extensive illegal, unreported and unregulated fishing enforcement patrol off the coast of South America.

Calhoun, the 10th NSC, is scheduled to be christened at Ingalls Shipbuilding in June 2022 and is expected to be delivered in early 2023.

Earlier this month, USCGC Kimball (WMSL-756), a shiny new 420-foot Legend-class National Security Cutter (named in honor of the organizer of the United States Life-Saving Service and the General Superintendent of the Life-Saving Service from 1878–1915), along with sistership Berthoff, kept a close eye on a four-ship Chinese Navy task force that came within 43 miles of the Alaskan coast.

Last week, Kimball made another international connection along the shores of the 49th State when, in a less tense interaction, she steamed alongside JS Kashima (TV-3508), an officer training ship of the Japan Maritime Self-Defense Force. A 4,050-ton vessel, the 469-foot Kashima is about the size of a frigate and is a good mirror to Kimball, armed with a single 76mm OTO and a set of ASW torpedo tubes.

The Kimball crew and the JMSDF crew, aboard the Naval Training Vessel Kashima, operated alongside one another in the Aleutian Island chain to exchange visual communications, followed by honors, as their respective crews lined their ship’s rails for a uniform salute.

This display of maritime cooperation and mutual respect emphasizes both the United States’ and Japan’s continued commitment to one another and to partnership at sea.

“The Kimball crew welcomed the opportunity to meet the Kashima and conduct a professional exercise at sea,” said Capt. Thomas D’Arcy, the Kimball’s commanding officer. “Seeing the crews aboard the Kimball and the Kashima line the rails for the passing of honors illustrates the spirit of collaboration between the U.S. Coast Guard and Japan’s maritime forces. The exercise, movements and communications between our vessels were expertly executed and the salutes exchanged exemplify the strength of our relationship with Japan as a key partner.”

Over the past year, the U.S. and Japan have increasingly strengthened their relationship in the maritime domain through the shared mission set of the JMSDF and the U.S. Coast Guard. This includes search and rescue collaboration with the 14th Coast Guard District in Hawaii and the Japanese Coast Guard Training Ship Kajima, as well as exercises between the Japanese Coast Guard and the Coast Guard Cutters Kimball, Munro and Bertholf near the Ogasawara Islands and in the North Pacific, respectively.

The first joint exercise between the Kashima crew and a Coast Guard crew occurred in the Bering Sea last September in the form of a personnel exchange with the Coast Guard Cutter Alex Haley.

The Kashima is one of four training ships that belong to the JMSDF and is used to train new officers. About 110 newly-commissioned officers and more than 300 crewmembers are aboard the ship for its nearly two-month journey from Hiroshima to Alaska, up to the Arctic and Pearl Harbor, Hawaii, then back to Japan.

Of course, June 2022, only about nine months from now, will be the 80th anniversary of the Japanese push against Dutch Harbor as a sideshow to the Battle of Midway, which shows just how much things can change in that amount of time. In another irony, of course, sharp naval historians will recognize that a previous “Kashima” on the Japanese naval list was a Katori-class light cruiser of WWII fame that also spent some time steaming under U.S. escort.

Posted on September 14, 2021 by laststandonzombieisland 4 comments

Via the U.S. Coast Guard 17th District Alaska (emphasis mine): 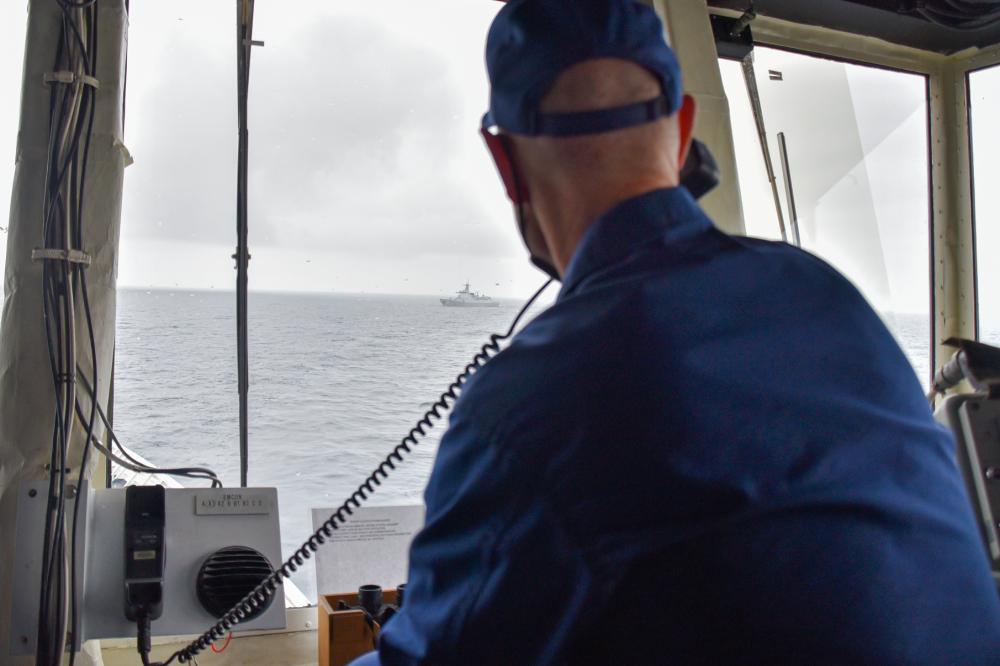 During a routine maritime patrol in the Bering Sea and Arctic region, U.S. Coast Guard Cutter Bertholf (WMSL-750), spotted and established radio contact with the Chinese People’s Liberation Army Navy (PLAN) task force in international waters within the U.S. exclusive economic zone, Aug. 30, 2021. All interactions between the U.S. Coast Guard and PLAN were in accordance with international laws and norms. At no point did the PLAN task force enter U.S. territorial waters. U.S. Coast Guard photo by Ensign Bridget Boyle.

The U.S. Coast Guard demonstrated its commitment to the Bering Sea and Arctic region with deployments of national security cutters Bertholf (WMSL-750), and Kimball (WMSL-756), and a U.S. Arctic patrol by icebreaker Healy.

Crews interacted with local, national and international vessels throughout the Arctic. During the deployment, Bertholf and Kimball observed four ships from the People’s Liberation Army Navy (PLAN) operating as close as 46 miles off the Aleutian Island coast. While the ships were within the U.S. exclusive economic zone, they followed international laws and norms and at no point entered U.S. territorial waters.

The PLAN task force included a guided missile cruiser, a guided missile destroyer, a general intelligence vessel, and an auxiliary vessel. The Chinese vessels conducted military and surveillance operations during their deployment to the Bering Sea and North Pacific Ocean.

All interactions between the U.S. Coast Guard and PLAN were in accordance with international standards set forth in the Western Pacific Naval Symposium’s Code for Unplanned Encounters at Sea and Convention on the International Regulations for Preventing Collisions at Sea.

While the PLAN doesn’t “officially” have any cruisers, the brand new Type 55 DDGs (NATO designation Renhai-class) are big ships, running to 13,000-tons, and having a 112-vell VLS launcher installed with missiles cued by a phased array radar. In other words, a bigger, newer version of a Tico. They are the largest and most advanced Chinese surface combatant.

PLAN’s Nanchang (DDG-101) Type 55, from a Japanese MOD intel picture/press release earlier this year. Look at all those VLS cells…

Bertholf. At 4,500-tons and armed with a 57 mm gun, a 20mm Close-In Weapons System, four .50-caliber machine guns, two M240B 7.62mm GPMGs, and space for two helicopters, along with passive EW and SRBOC systems, it is about as heavily armed as current US Coast Guard cutters get. Of course, I’d like to see a few Harpoons/NSSMs, Mk 32 Torpedo tubes, and maybe a RAM missile system on her, but that’s just me.

Facing off against this, the pair of 4,500-ton Legend-class National Security cutters combined had two 57mm Bofors, two CIWS, and some mounted machine guns.

In all seriousness, such interactions, coupled with the use by the Navy of the same class of white hulls to cruise through the contested South China Sea on Freedom of Navigation Patrols, point to the USCG’s larger cutters at a minimum getting an armament upgrade to swap out CIWS for C-RAM and pick up a few Naval Strike Missiles to at least put them on-par with the admittedly under-armed littoral combat ships.

If you act like a frigate, no matter the color of your hull, you better be able to back it up.