A rifle that hit the market the same year the Wright Brothers first took to the air, the Savage Model of 1903 had a lot going for it and is highly collectible.

Rather than a basic bolt-action or a lever gun, the 1903 was pump-action, something that was still pretty novel at the time. As such, it was an answer to the Colt Lightning and Winchester Model 1890, pump-action takedown carbines that had been introduced just a decade prior. However, one-upping Colt and Winchester, which both utilized underbarrel tube-style magazines, Savage’s new gun had a detachable 7-shot box magazine.

Takedown rimfire rifles and carbines were especially appealing in the 1900s as they made for easy transport on bicycles, which were much more widespread than automobiles, and for easy storage in traveling shooting gallery operations.

Along with Tom Swift, Frank Reade Jr., and others, Jack Write was one of the host of fictitious “Edisonade” series of brilliant young inventors from the 1880s-1914 who graced the pre-Great War dime novels of the era. These were young men whose adventures were full of pluck and included the high tech forward thinking science of the era including radios, electric weapons, electrical land vehicles, steam powered robots, airships, rockets and submarines.

Speaking of which, Brooklynite Cuban-American Luis Philip Senarens, who was so busy that he wrote under a series of at least a half-dozen pseudonyms and has been described as both “the first prolific writer of science fiction” and “the American Jules Verne” crafted no less than 300 dime novels, inventing first Frank Reade Jr. and later Jack Wright. Most of these he wrote as “Noname.”

While written almost exclusively in the 1890s, they were republished several times through about 1920 and while Senarens himself was not the illustrator, the detailed descriptions he embedded in his work helped craft the images seen on the cover.

Many of these involved complex submarine operations long before they were practical including: 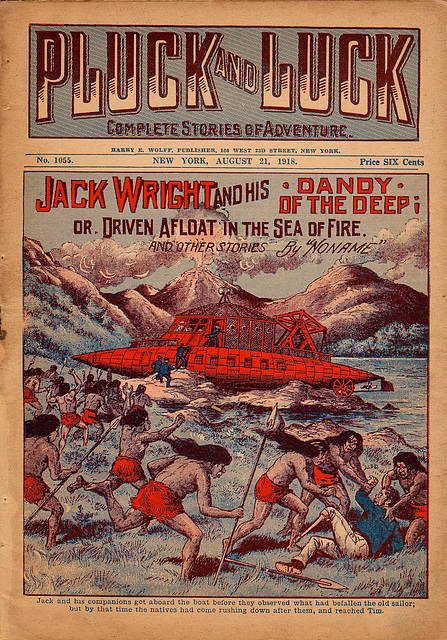 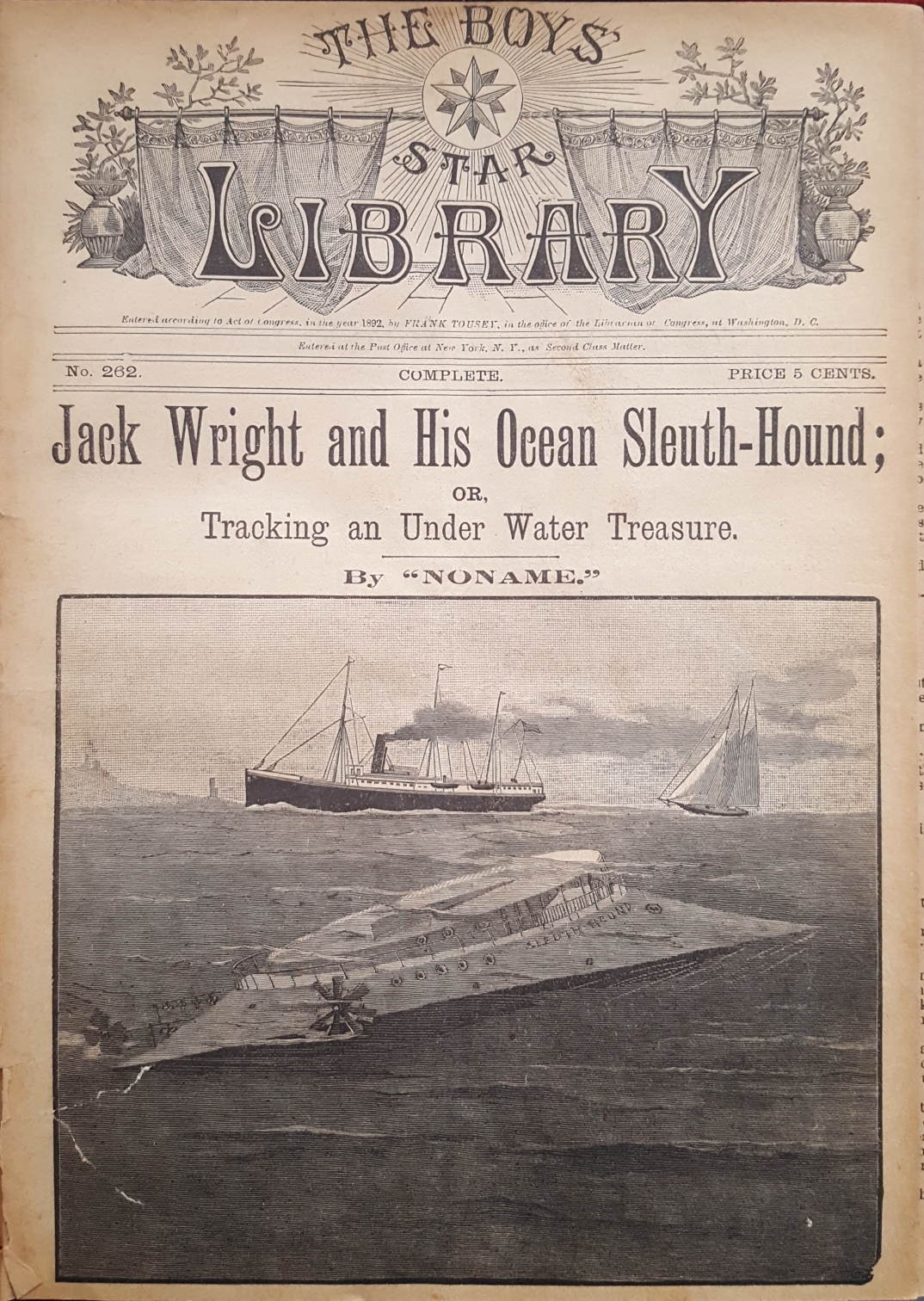 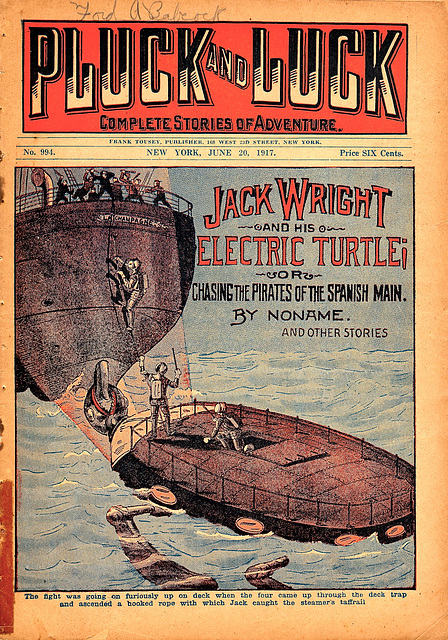 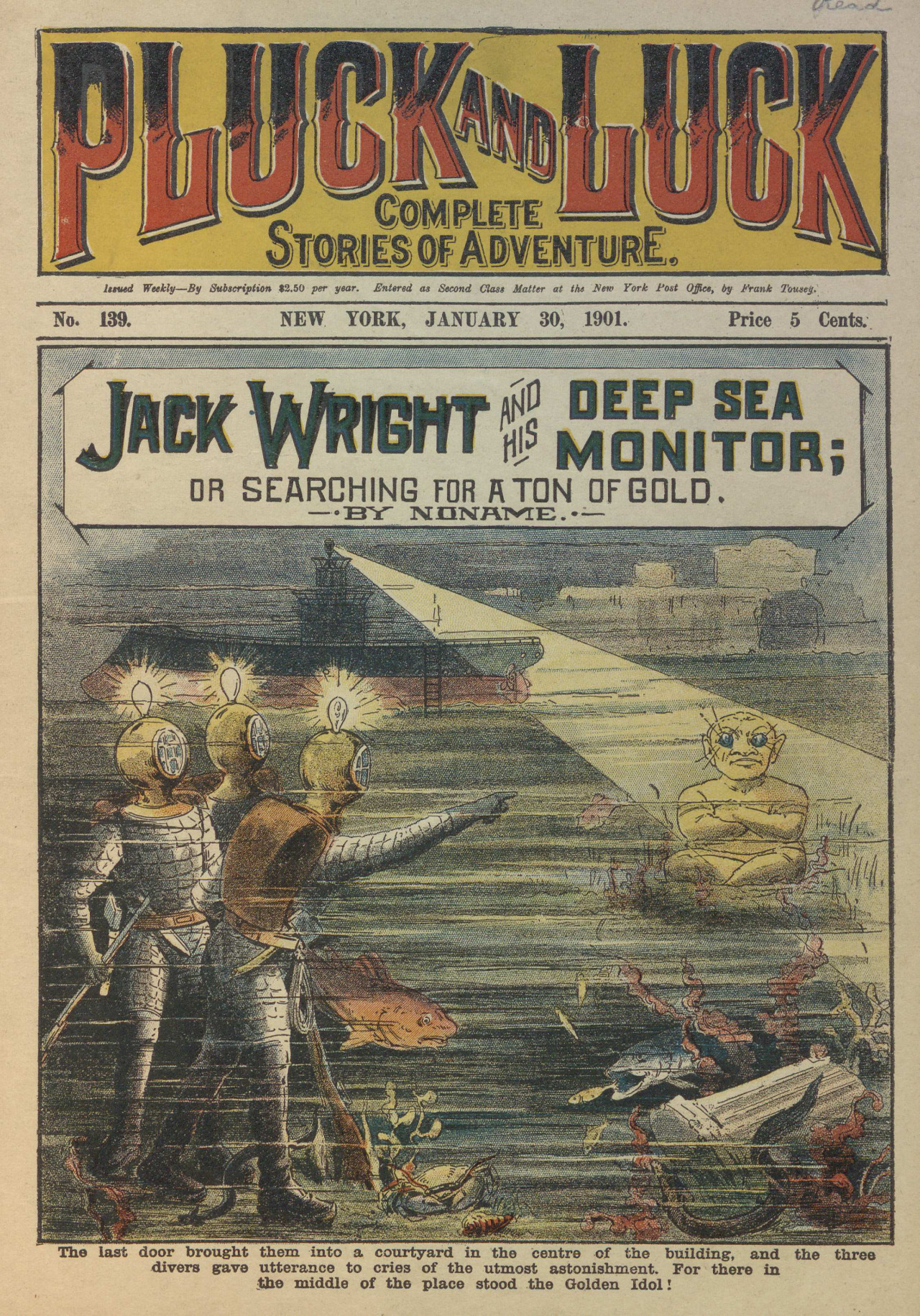 Senarens also gave Reade his own U-boat from time to time, such as in this arctic submarine adventure from 1892 and in The Search for the Silver Whale.

It should be realized while looking at this work that the U.S. Navy’s first modern commissioned submarine, the dynamite gun armed USS Holland, was not commissioned until 12 October 1900 while the Royal Navy’s first submarine, HMS Holland 1 (guess who the inventor was), was not accepted until the following year. Russia’s first working submersible, Delfin was adopted in 1903, and the German’s kerosene powered SM U-1 was not commissioned until 1906. It could be argued the submariners of these early craft may have had a copy of a Noname attributed submarine dime novel stashed among their sea bags.

Other than the works of Swedish industrialist and arms dealer Thorsten Nordenfelt (who will be spoken about in a coming Warship Wednesday), Spain’s Peral, and the experimental French submarine Gymnote, which were afloat during Jack Wright’s heyday, there were few workable submersibles on the seas.

As for Senarens, he died in 1939 though his Reade and Wright adventures had peaked long before then.

“In my works I try to combine classical painting style & motifs with modern design & interesting concepts. For me, always the most important in my work is create unique atmosphere and tell some kind of story, show everyday situations in unusual environment. The biggest inspiration for me is the classic paintings of the late XIX and early XX century, history, everyday life, movies, games and books,” says the Krakow-based artist. 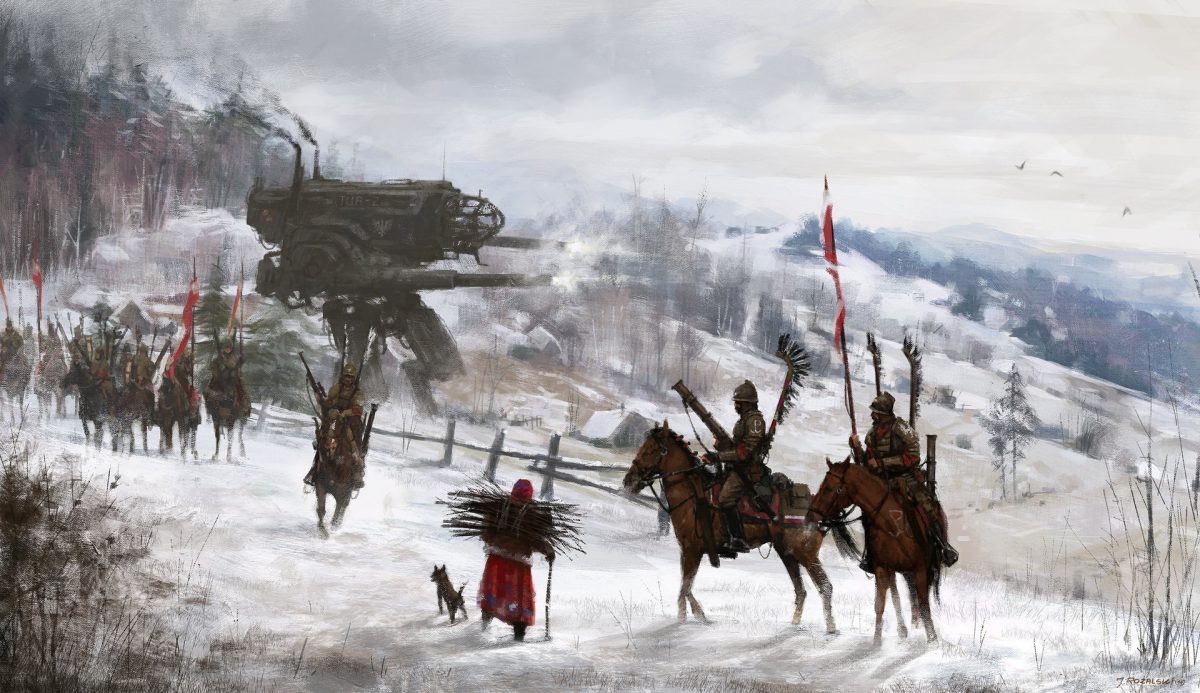 Wojtek. Note the sniper rifle. The bear by this name was famous among Free Pole forces in WWII 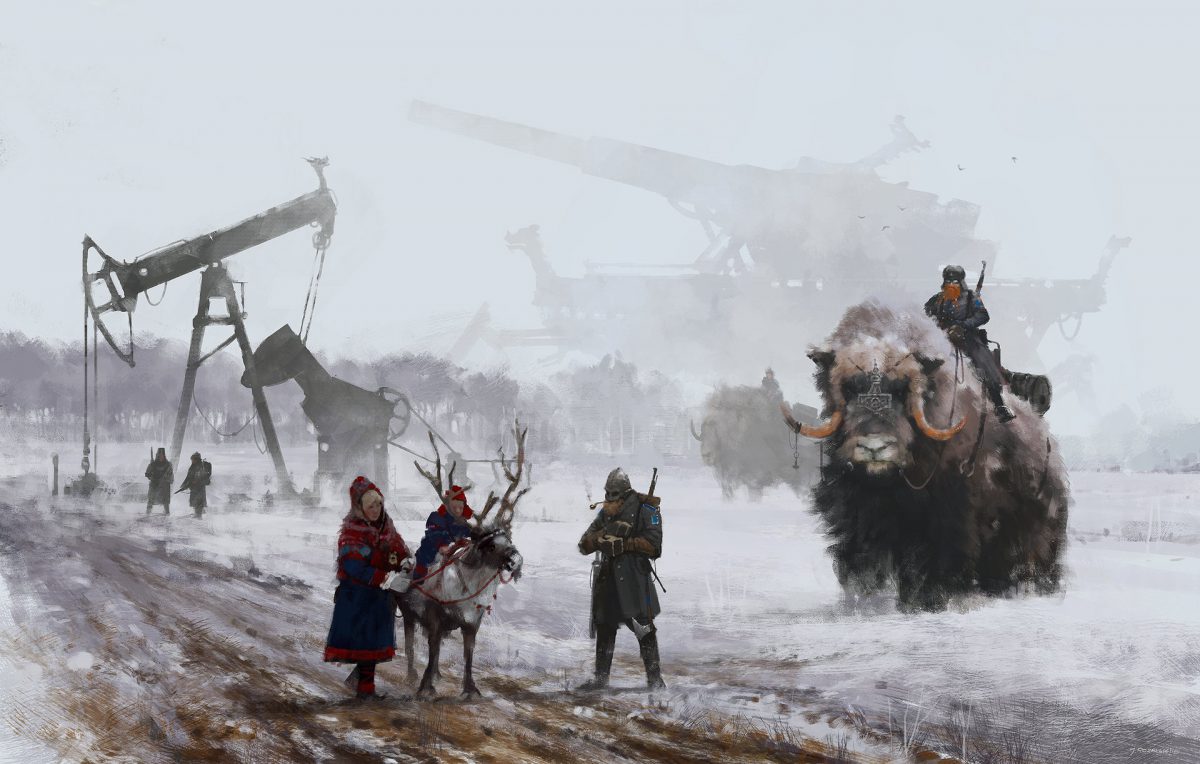 Besides his 1920 mecha universe, he also makes trips to the past, other periods of history, and the future, to bring his unique vision to play. 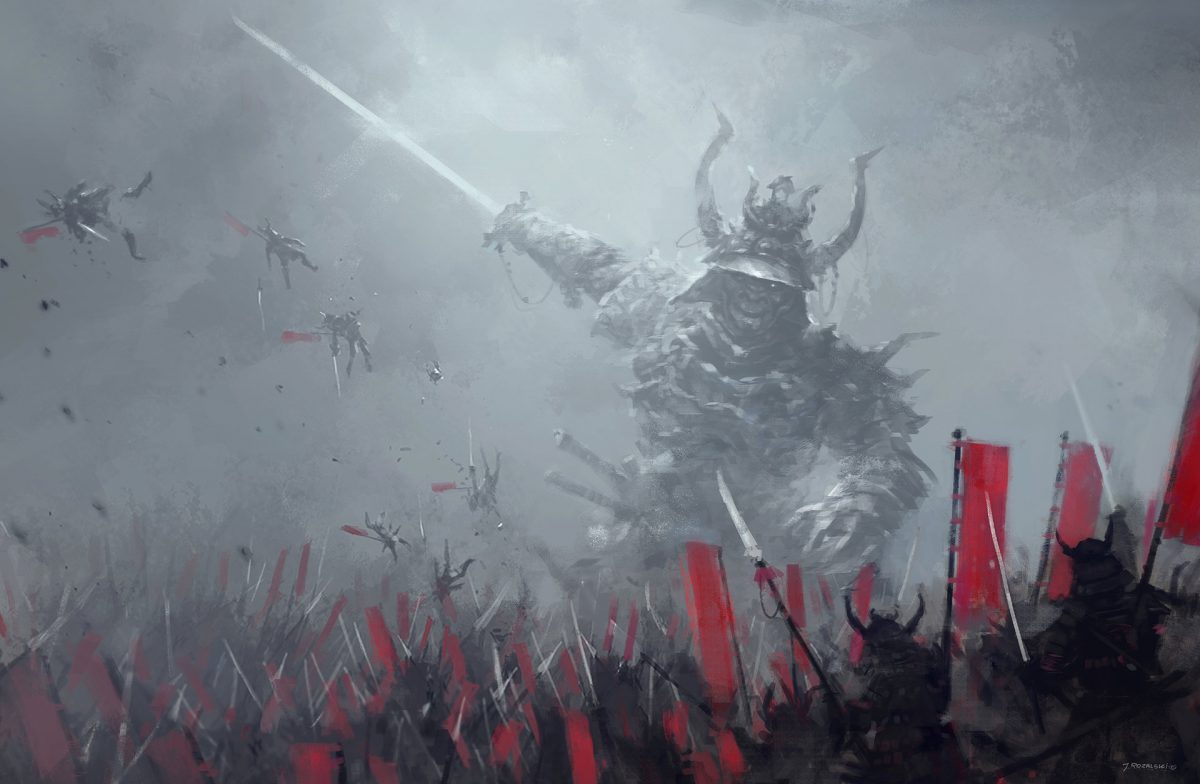 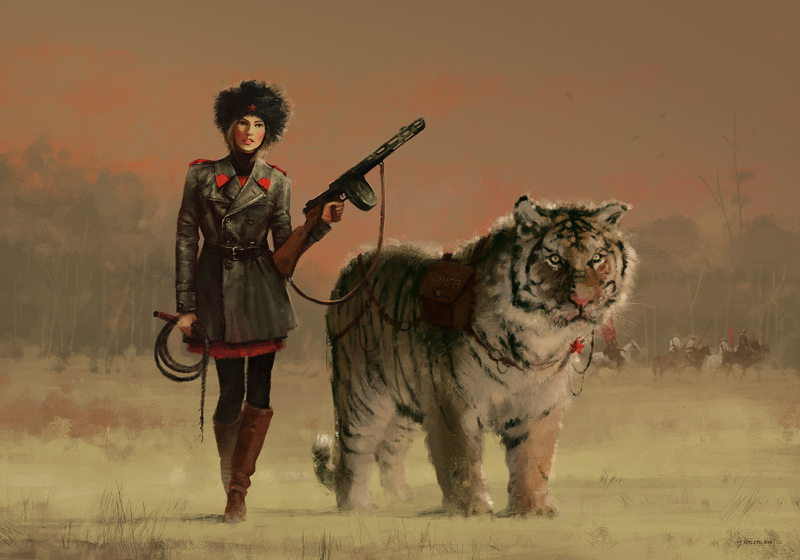 What’s not to like about a PPSh-wielding, tiger riding she-warrior of the Carpathians

“Westerplatte” Note the Polish infantryman vs Nazi mechs and the SMS Schleswig-Holstein, 1939 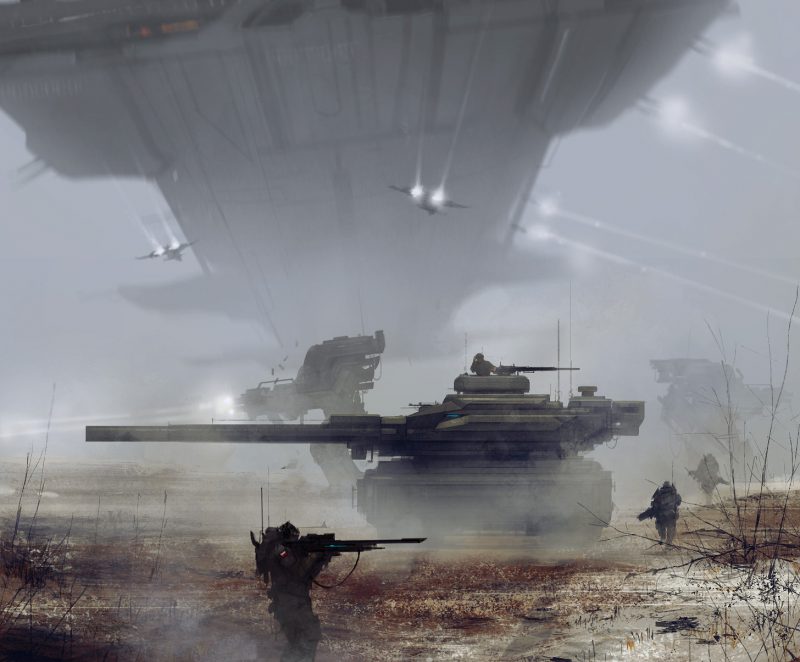 “Spacefight,” showing a very Merkava-like MBT, along with mechs and troopers.

His art is the basis for the Scythe strategy game and you can find numerous prints available as well as enjoy several online galleries of his work here and here.

Much as once a week I like to take time off to cover warships (Wednesdays), on Sunday, I like to cover military art and the painters, illustrators, sculptors, and the like that produced them.

Alphonse-Marie-Adolphe de Neuville was born in 1835 at Saint-Omer, Pas-de-Calais and, growing up on the coast, entered naval school at age 21. However, he always had an eye for the pencil and the brush and by 1860 was completing military-themed paintings and sketches that soon became widely received.

He illustrated several books including one that was very far-reaching for its time.

Although submersible were more fiction than fact at the time, de Neuville was able to combine his nautical background with his art to craft haunting illustrations of life under the ocean in a modern attack submarine in 1870 for the Hetzel editions of Jules Verne’s Twenty Thousand Leagues Under the Sea. The 111 drawings in that work (!) by de Neuville even today harken to adventure, naval warfare, and sci-fi from the true steampunk era. 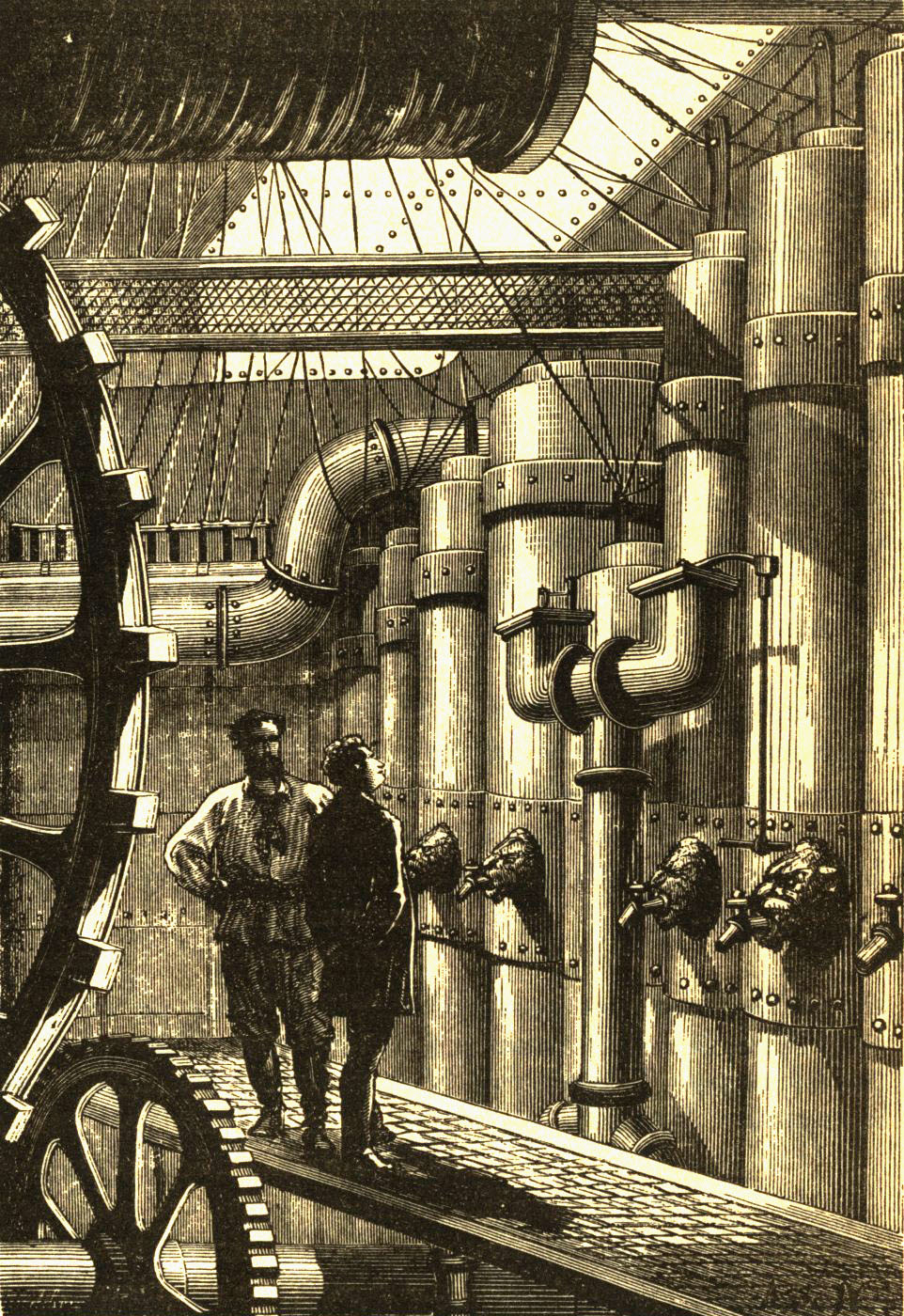 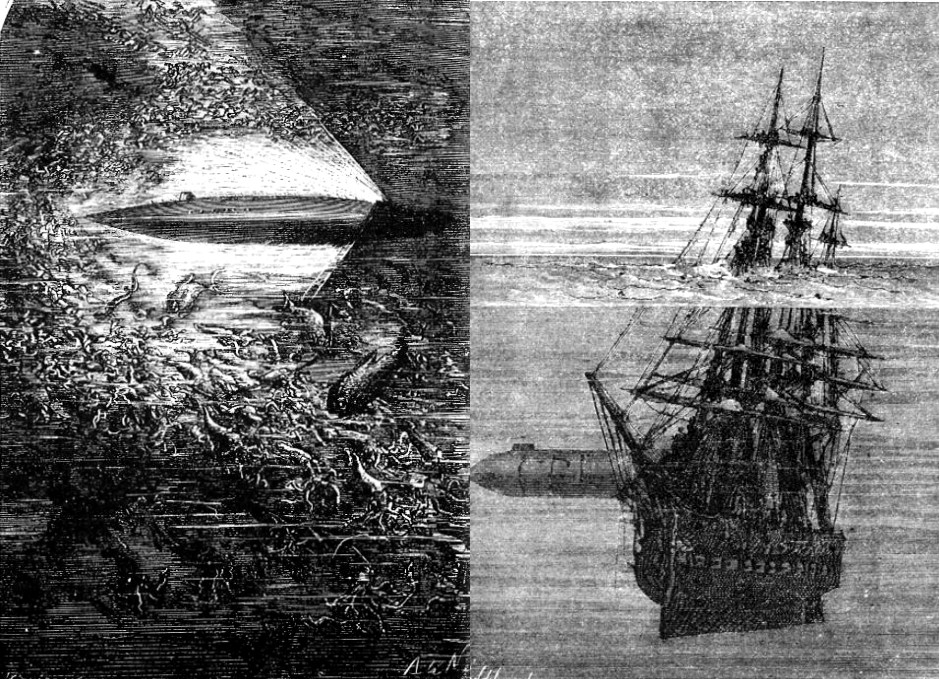 In 1871, France was defeated (handily) by the Prussians and that lost war provided de Neuville steady work in immortalizing the lost armies and battles of that conflict. 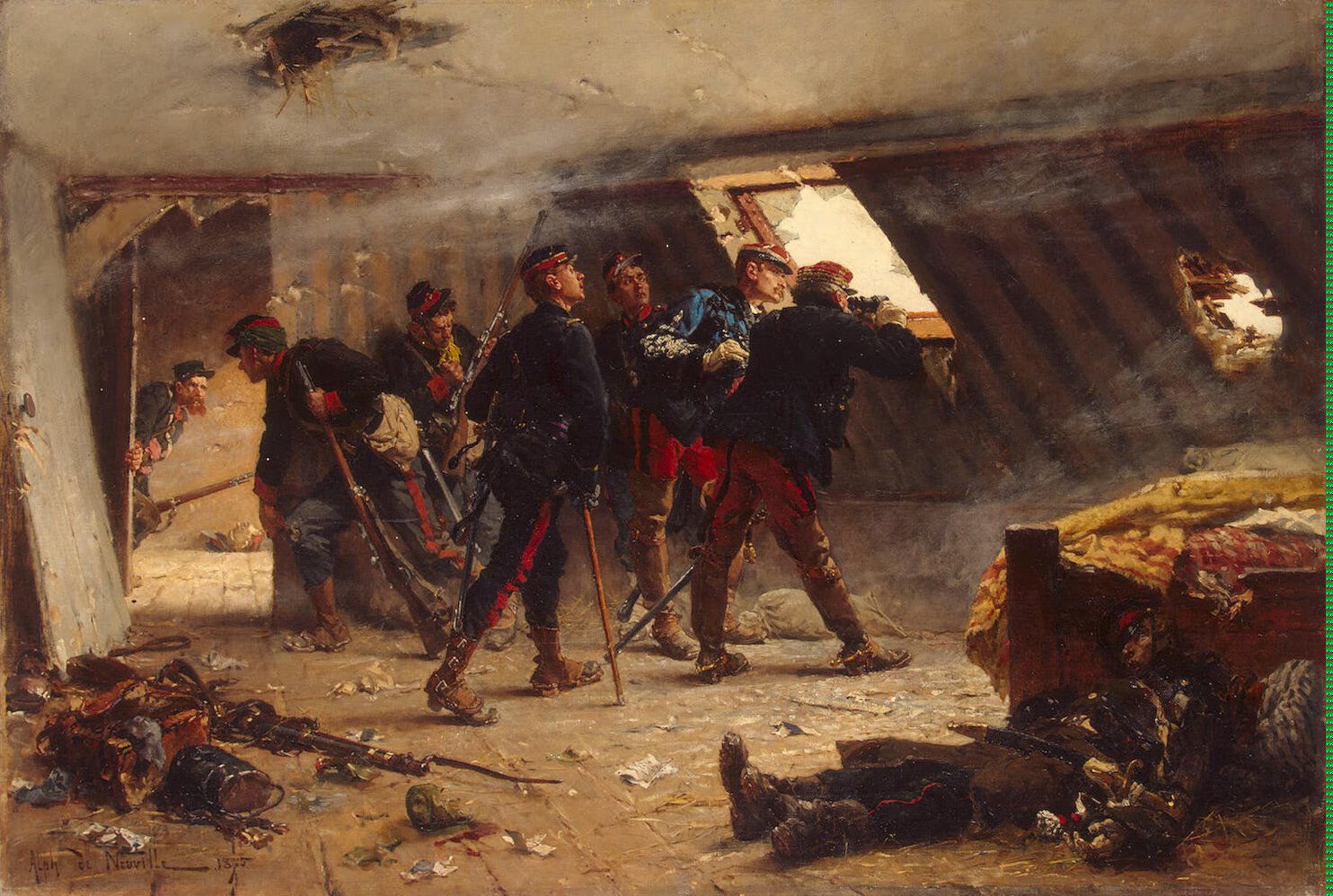 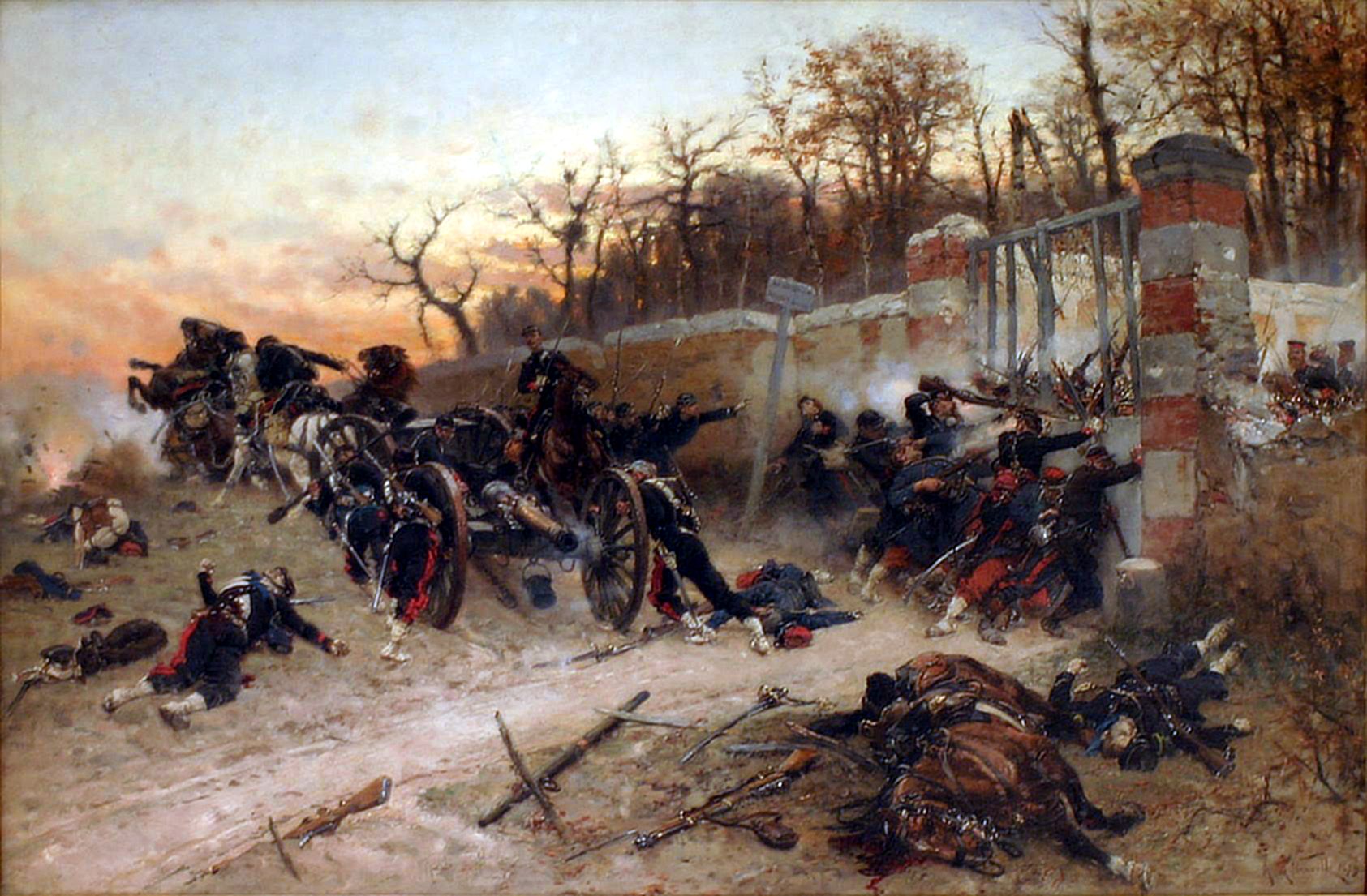 “Uhlan et cuirassier de la brigade Von Bredow, morts, ” Showing a Dead Prussian Uhlan and Cuirassier, Franco-Prussian war. “Von Bredow’s Death Ride” in which some 800~ Prussian horsemen charged the French lines with surprising results was one of the last effective use of Napoleonic-style cavalry in modern warfare. On exhibit at the Musée des Invalides, Paris.

Alphonse de Neuville – In the Trenches. Note the broken rifle. The desperation. You feel the cold of that 1870 winter.

Perhaps his most famous painting of this war was Les dernières cartouches (The Last Cartridges) which immortalize the stand by a group of French Marines of the Blue Division at Bazeilles on 31 August and 1 September 1870 during the Battle of Sedan.

That imagery became famous in France and has been both widely imitated and reproduced in the past century and change.

One of the few Georges Méliès films (he made more than 500) that remains in existence is based on the painting and was created in 1897.

Alphonse de Neuville also did an extensive study of the French army uniforms of the era, which serve as a reference and a window into that era to this day.

Sergent of the 9th 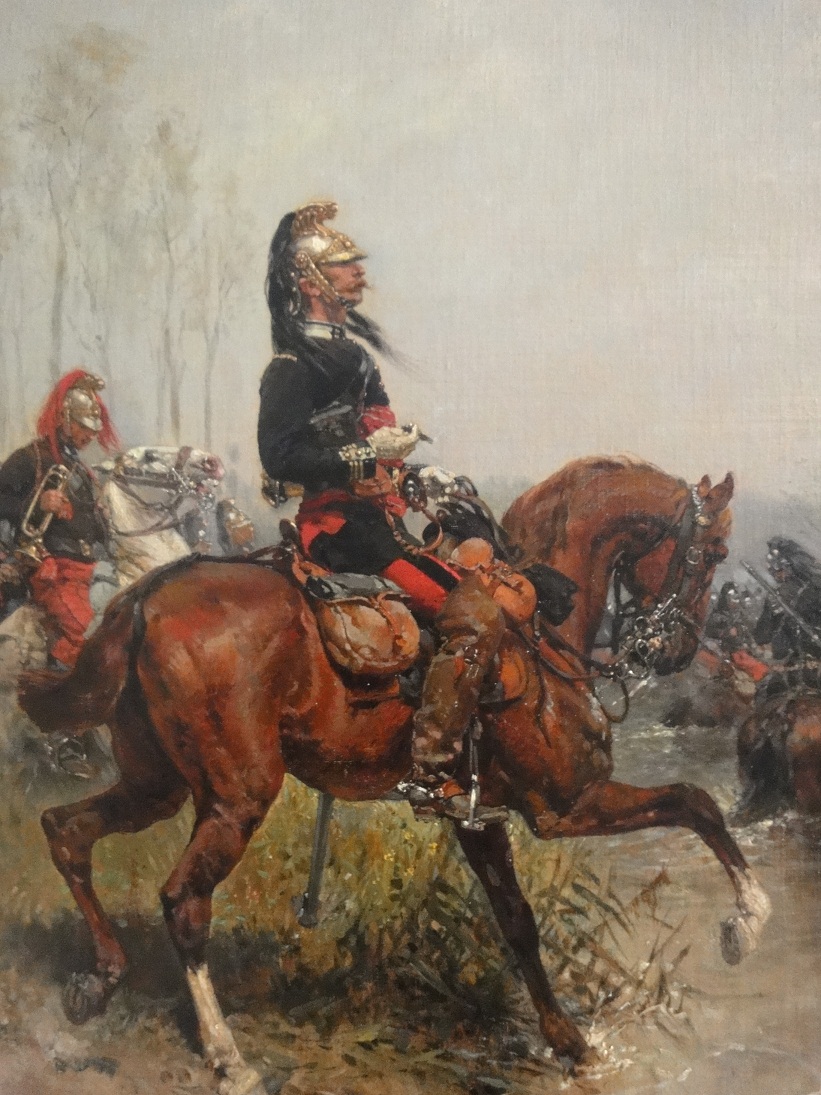 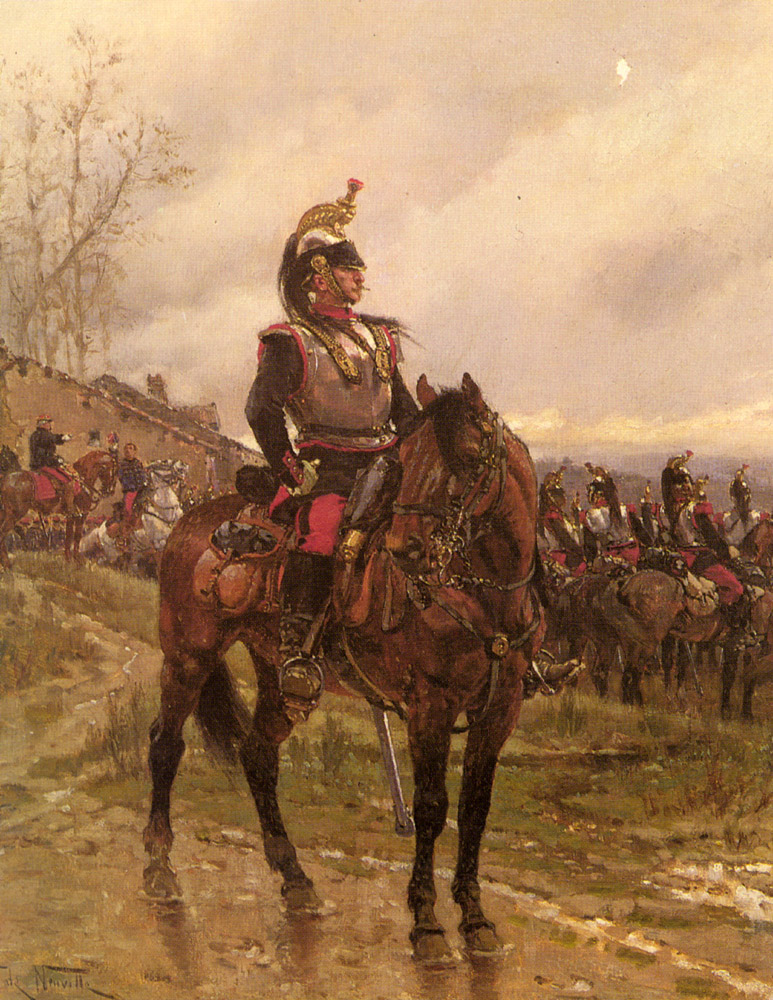 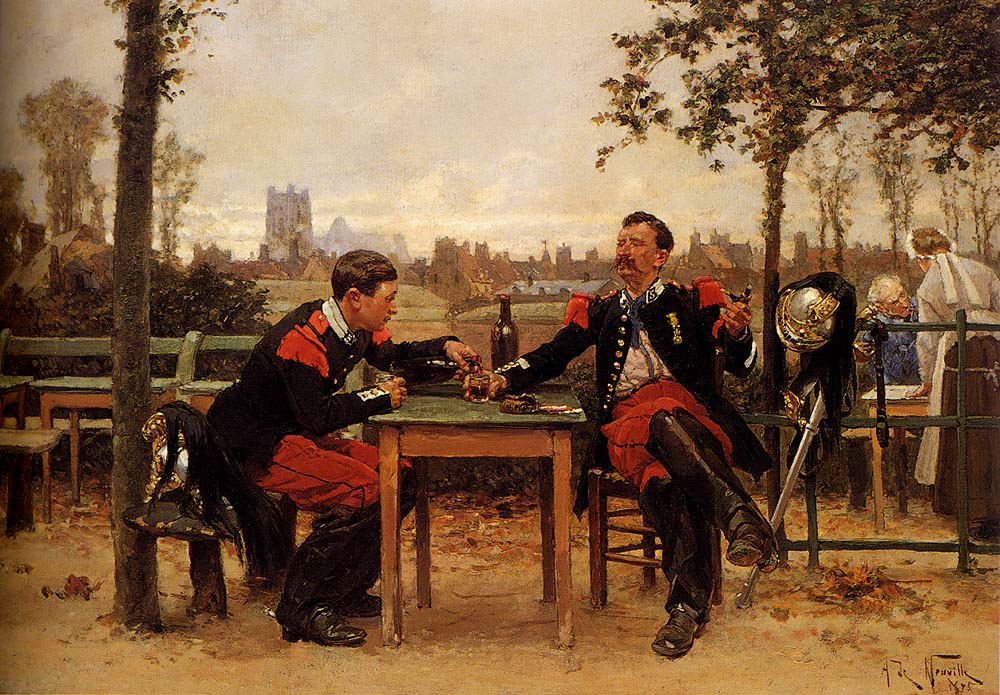 A French Combat Engineer by Alphonse Marie Adolphe de Neuville. Note the detail on the Chassepot 1866 Needle rifle and how the officer in charge of the detail has his eyes glued on the engineer standing sentry with a cigarette in his hand and not on the work party. In the below sketch, that background detail is different

Our artist also tried his hands at other conflicts of the era.