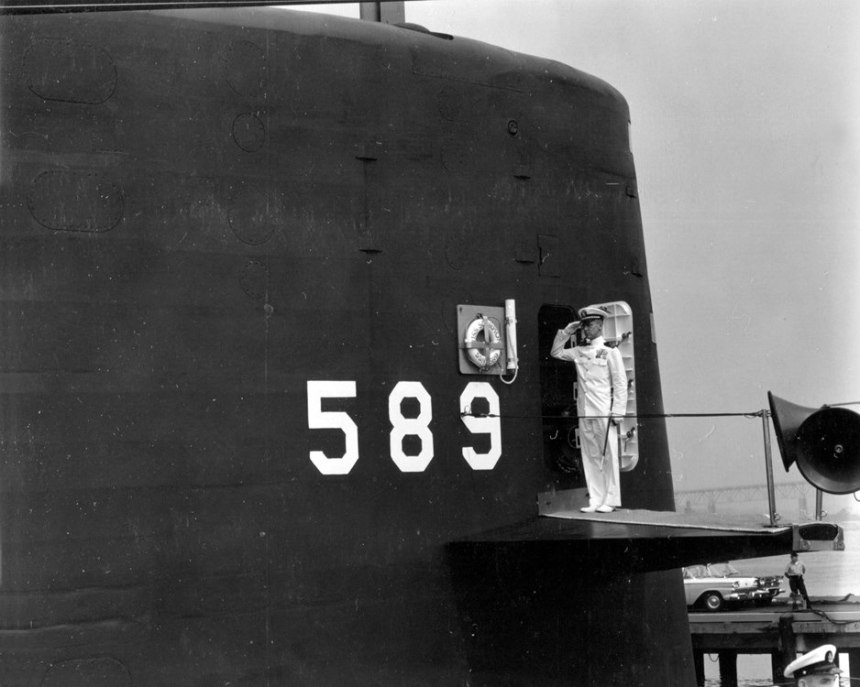 Whereas normally this post would be some vintage ironclad, battleship or steam sloop, today we honor the men who lost their lives 50 years ago this week when USS Scorpion (SSN-589) a Skipjack-class nuclear powered submarine sunk some 750-miles south-west of Azores under 9,600 feet of cold Atlantic water.

Her brave crew of 99 Sailors lost their lives in one of the greatest non-wartime tragedies in the U.S. Navy’s history.

Gratefully, it was over in moments. 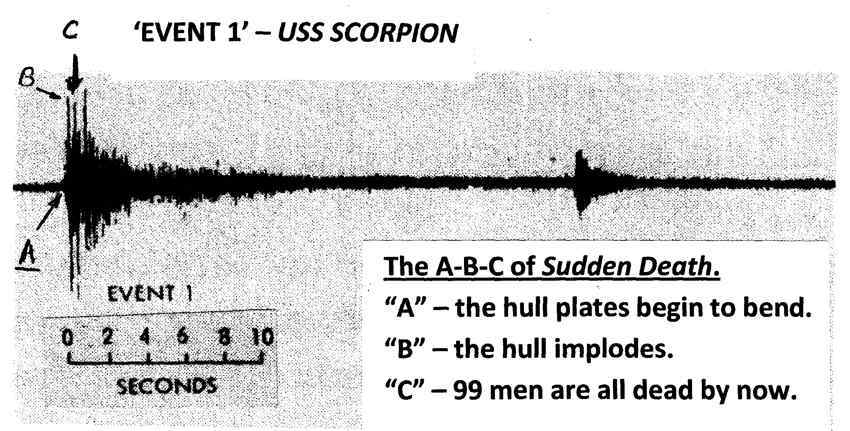 Today, we honor their courage, their service to our country and their commitment to duty.

Vale, Scorpion, may your final crew rest peacefully and on eternal patrol.

Posted on November 18, 2015 by laststandonzombieisland 3 comments

Here at LSOZI, we are going to take off every Wednesday for a look at the old steam/diesel navies of the 1859-1946 time period and will profile a different ship each week. These ships have a life, a tale all of their own, which sometimes takes them to the strangest places.
– Christopher Eger 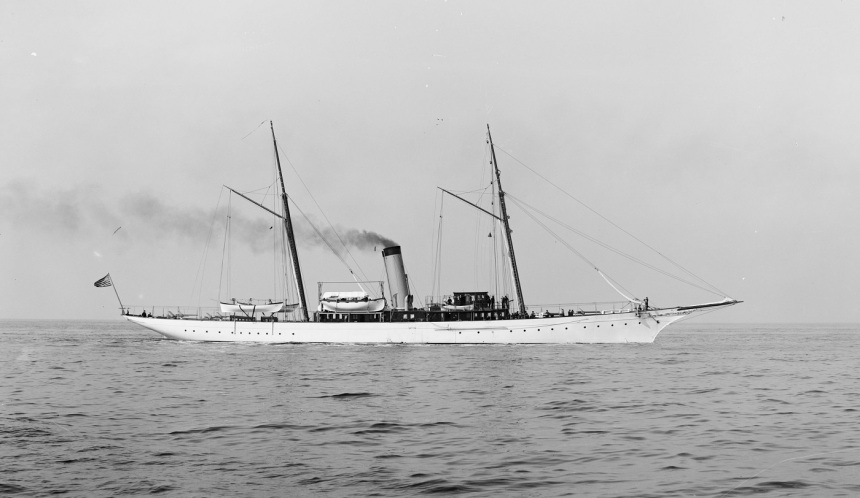 Here we see the steam gunboat USS Scorpion (PY-3) in her gleaming white scheme in an image taken in 1899. She may not look it, but when the Detroit Photographic Co. snapped this photo, the mighty Scorpion was already a killer. 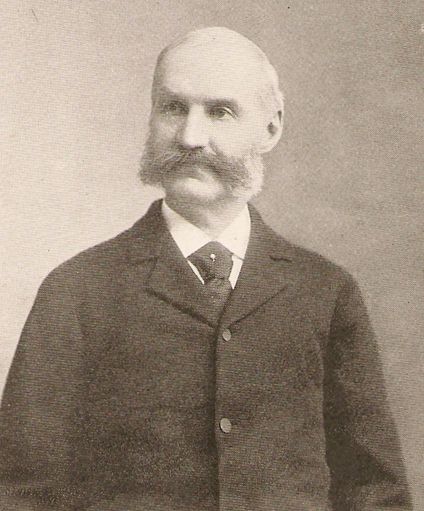 Ordered by Massachusetts textile magnate Matthew Chaloner Durfee Borden, commonly referred to at the time as “the Calico King” due to his huge factories in the Fall River area, Scorpion began life in 1896 as the very well-appointed steam yacht Sovereign built by the private yard of John N. Robins in South Brooklyn, New York to a design by J. Beaver Webb.

The rakish vessel, a 212-footer at the waterline (250-foot oal) with twin masts and twin screws powered by 2500shp of triple expansion engines, she could touch 15 knots with ease and, when running light in just ten feet of seawater, surpass that when needed.

The New York Times wrote she was, “supposed to be the fastest craft of its size on the Atlantic seaboard, and all the Jersey Central Railroad commuters between Seagirt and Atlantic Highlands know all about it.”

Borden entered her into the New York Yacht Club, where he was an esteemed member and she sailed under his care with the Seawanhaka Yacht, South Side Sportsmen’s, and Jekyll Island Clubs as well.

When war with Spain came, Borden did the patriotic thing and placed his yacht at the Navy’s service, who promptly hauled her to the New York Navy Yard, painted her haze gray, added a quartet of 5″/40 guns located on her sides, fore and aft of the superstructure– the heaviest battery fitted to any yacht converted for service during that conflict, and commissioned her four days later as USS Scorpion on 11 April 1898. 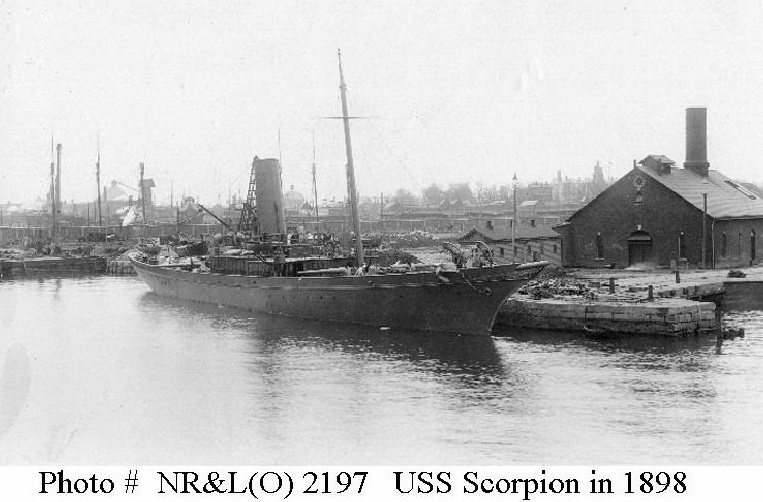 While only a yacht, her powerful 5″ guns, typically reserved for cruisers, made her a brawler able to dish out some heavy blows and the Navy Department had just the man to conn her. You see Scorpion’s skipper was German-born LCDR Adolph Marix (USNA Class of 1868) and the former executive officer of the battleship USS Maine whose explosion in Havana four months earlier had sparked the war. 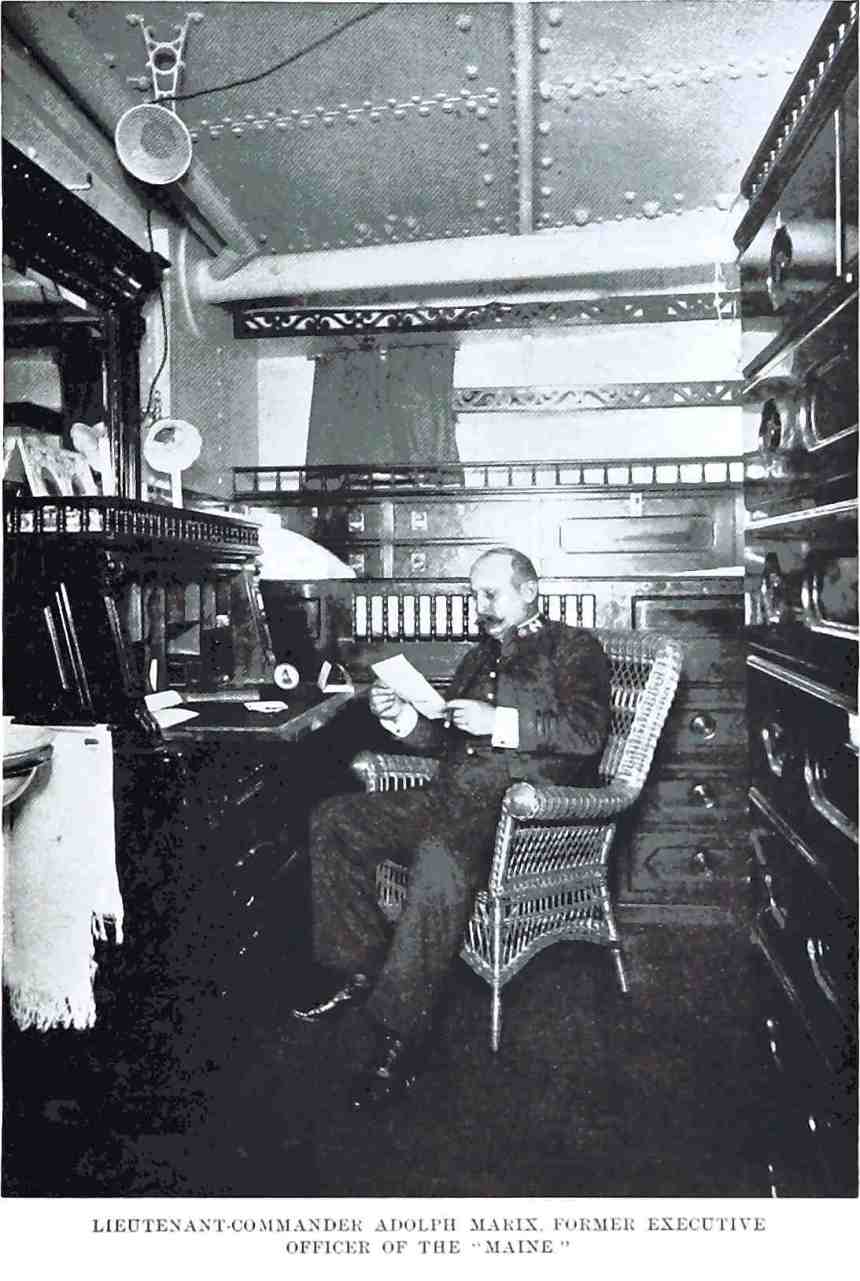 By May she was off the coast of Cuba and spent an eventful ten weeks capturing lighters, assisting with landings, enforcing blockades and patrolling the shallows and high seas alike with the Flying Squadron.

On July 18, she was part of a 7 ship attack force, including two gunboats of shallow draft—Wilmington and Helena; two armed tugs—Osceola and Wampatuck; and two converted yachts—Hist and Hornet that sailed into the heavily fortified Spanish base at Manzanillo and, with using her big 5-inchers to good effect, kept the Spanish coastal batteries tied down while the smaller ships destroyed five Spanish gunboats, three blockade runners and one pontoon in less than four hours with little damage to themselves.

When the war ended, Scorpion was recalled to New York, painted white and refitted with a smaller armament while Marix left on his way to become a Vice Admiral. He wasn’t the only one. Over the course of her 31 years in the Navy, she had a staggering 21 skippers to include a Medal of Honor winner and no less than five who went on to become admirals. 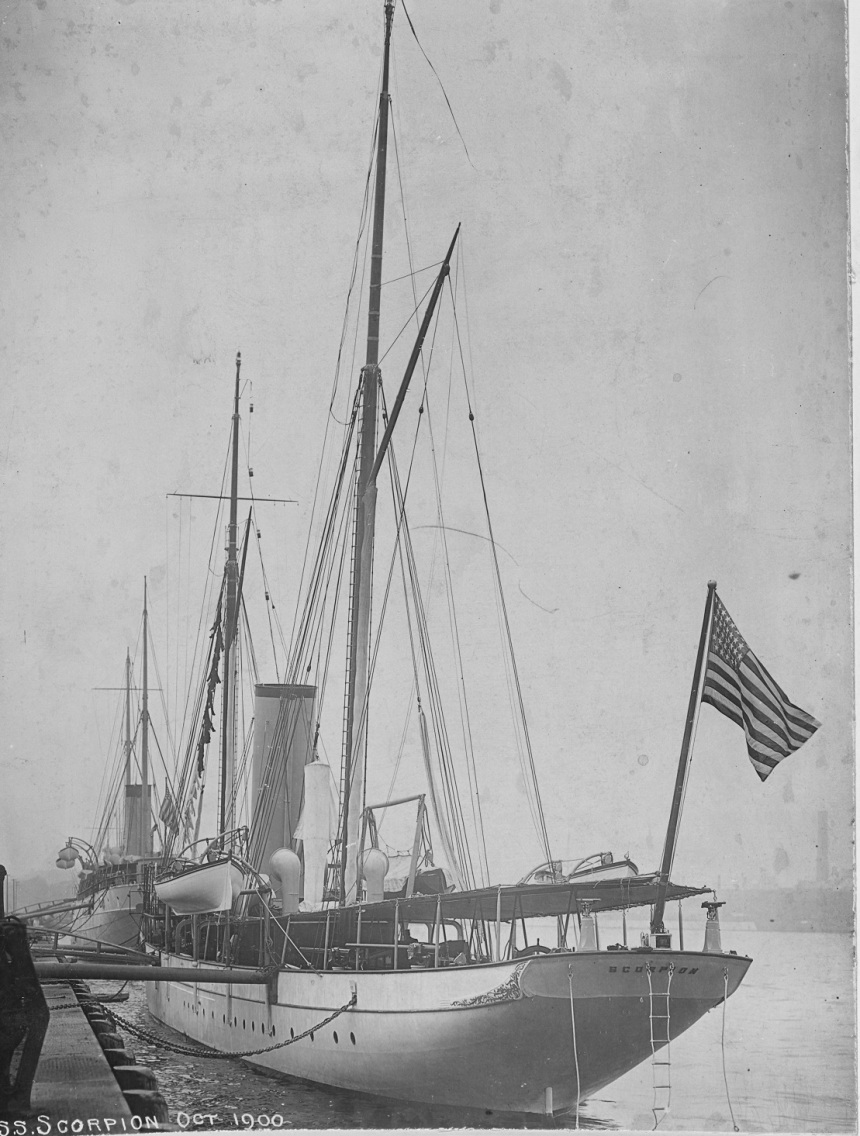 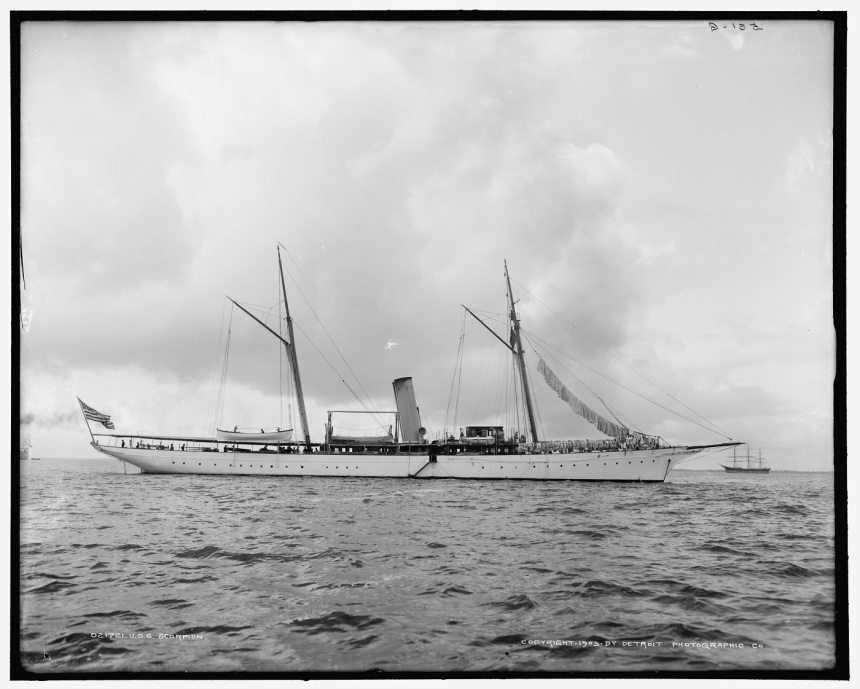 Another Detroit Publishing Co. shot, this one from 1903, with her laundry hanging. LOC 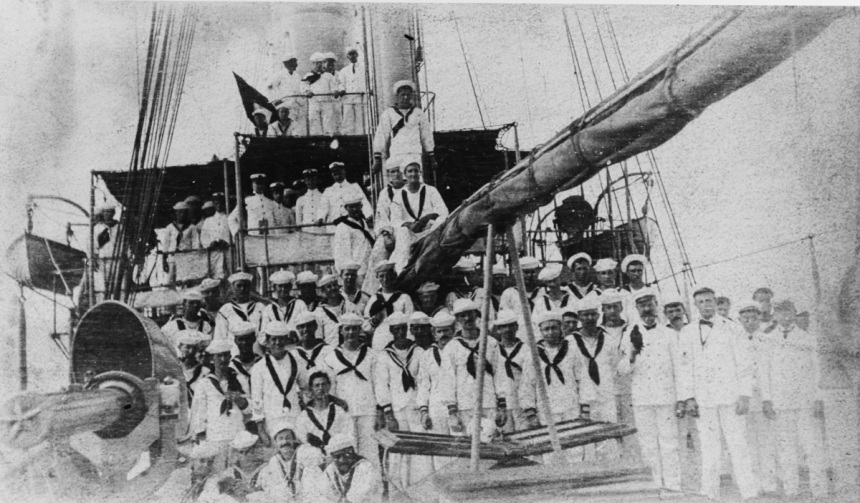 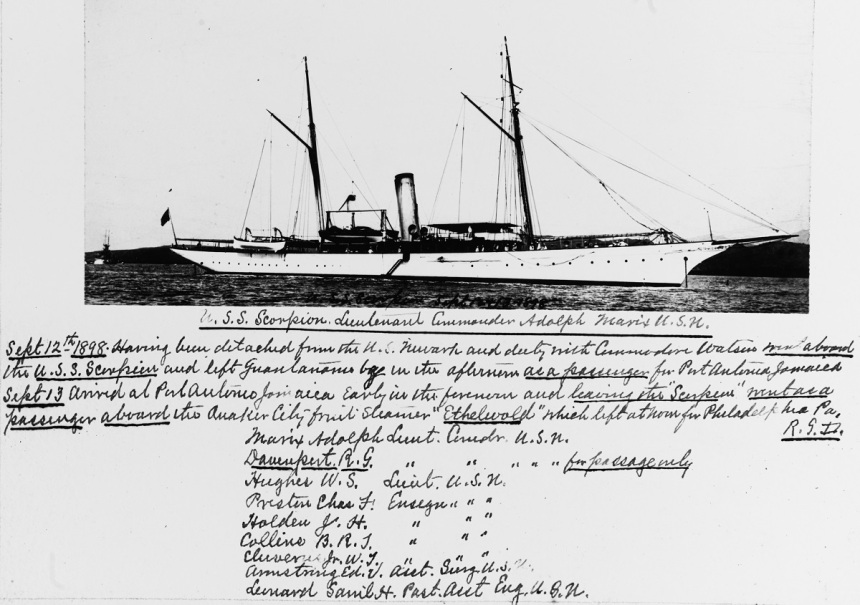 Photograph of ship, with diary entry and roster of officers. Lieutenant Commander Richard G. Davenport was aboard as passenger. Description: Catalog #: NH 43803

As you may have guessed, Borden never got the Scorpion back and the Navy paid good money for her. She spent six years with the North Atlantic Squadron as a dispatch ship and flag waver small enough to venture into backwater ports around the Caribbean and protect U.S. interests. 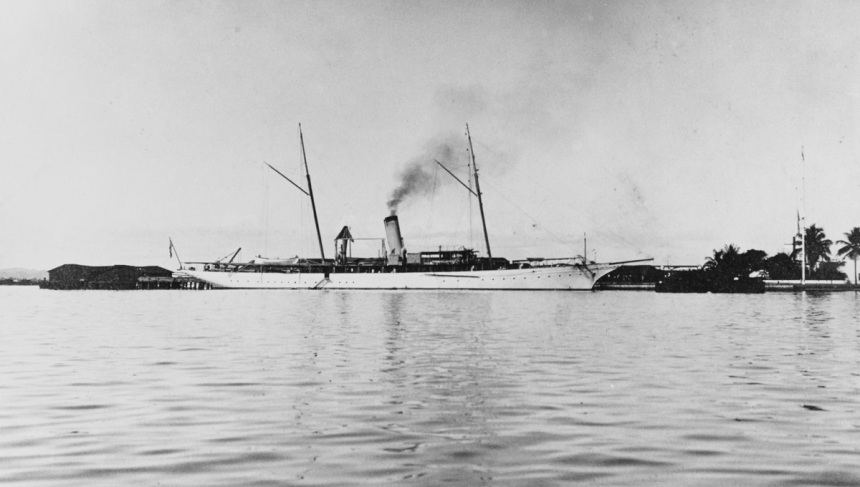 Speaking of which, by 1908 she was on her way to Europe. Keeping the svelte gunboat with her 60-70 man peacetime crew in semi-permanent anchor in the Bosporus near the Dolma Bagtchi Palace, she became the station ship in Constantinople. There she remained, leaving to take the occasional Black Sea or Med cruise, for a decade. 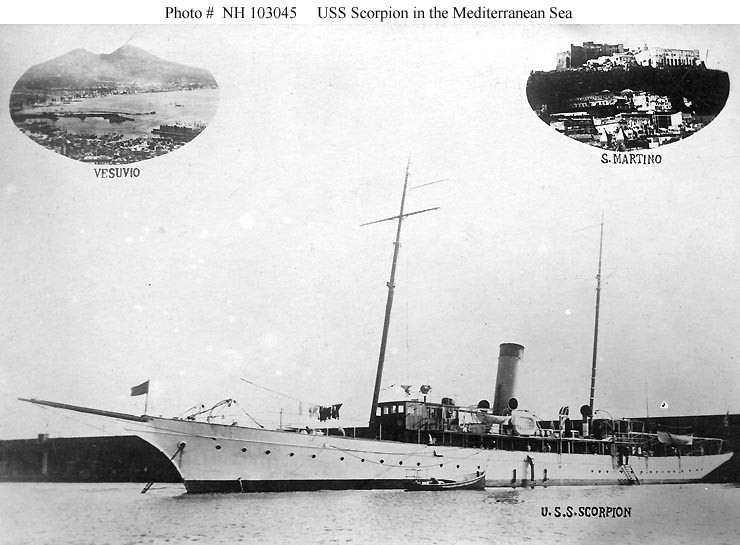 Several times she took part in international actions, helping to assist earthquake victims in Messina, Italy; landing armed sailors to guard the U.S. Legation in Constantinople during riots in the city; and venturing into the disputed Balkan ports during the tumultuous events that led up to the Great War. 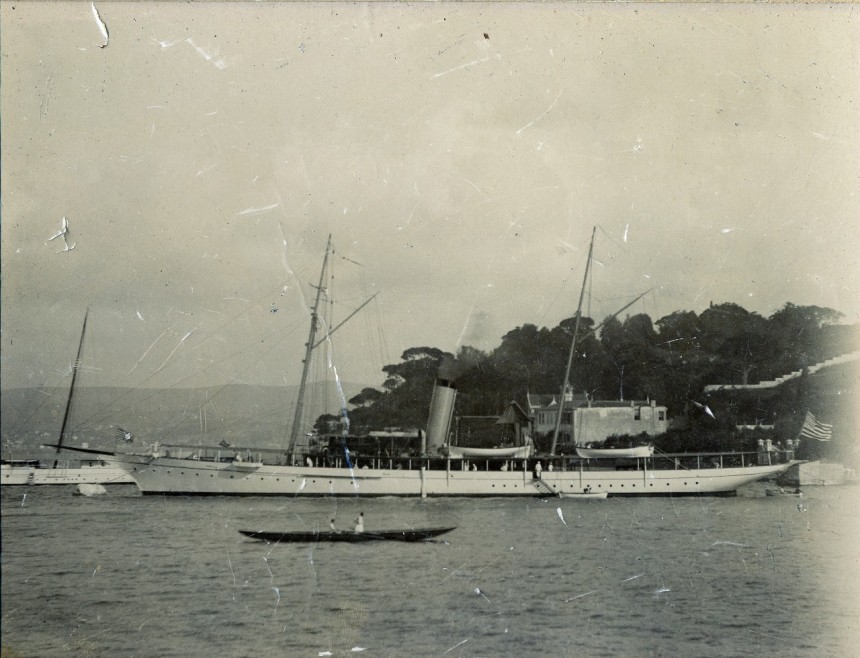 Speaking of which, when the U.S. entered WWI on the side of the Allies, the humble Scorpion faced the might of the German-cum-Ottoman battlecruiser Goeben and, a suddenly a stranger in a strange land, was peacefully interned on 11 April 1917 without a fight, her breechblocks removed and a guard posted. 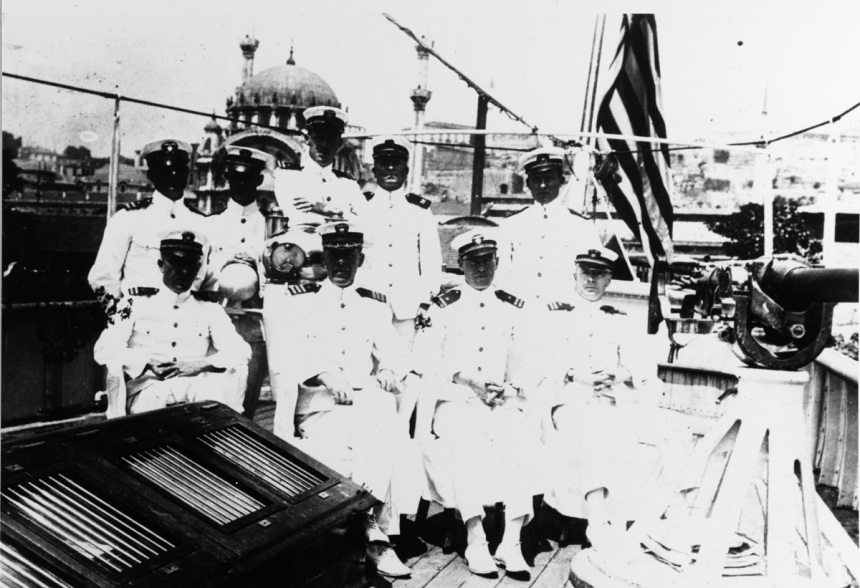 When the war ended, she rearmed and remained as the flag of the U.S. High Commissioner to Turkey, keeping her place in now-Istanbul until 1920 when the influx of White Russian exiles and tensions with Greece forced her relocation to Phaleron Bay, Greece, where she remained on station until recalled back to the states 16 June 1927.

In the early 1920s, the Black Sea was an American lake, as the Russian, Bulgarian, Romanian and Ottoman fleets had largely ceased to exist while the British and French fleets, facing near bankruptcy and mutinous crews, respectively, were keen to send only a few vessels to Constantinople and Odesa and withdraw them as soon as possible. At its height, the U.S. fleet in Constantinople included over 26 warships including the battleships Arizona and Utah, a dozen destroyers, heavy and light cruisers, floating repair shops, and transport ships. 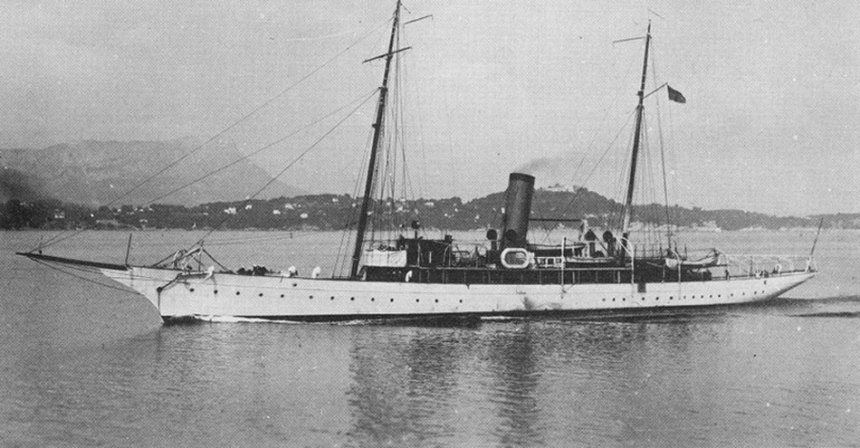 Decommissioned, Scorpion sat on red lead row for a couple years, a Spanish-American War vet in a fleet of 1920s modern marvels.

On 25 June 1929, she was sold for her value in scrap. Very few artifacts remain from her other than some postal covers.

As for Borden, he passed away in 1912 at age 69 while his beloved Sovereign/Scorpion was in Europe. His leviathan American Printing Company outlived them all, but by 1934 was shuttered because of the Great Depression.

Dr Robert Ballard is a world renowned oceanographer and underwater archeologist. You may have heard his name if you are interested in the wrecks of the Bismarck, PT-109, the USS Yorktown, and others. Most famously he is the guy who found the RMS Titanic in 1985. Basically, between Clive Cussler and Bob Ballard, if it’s been lost at sea they can find it. 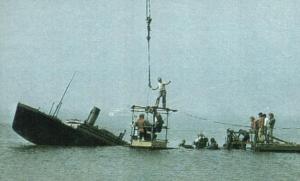 Something you may not know about Bob is that he got his start and financing for finding the Titanic from the US Navy. Contrary to Clive Cussler’s famous book Raise the Titanic, the US government had no interest in the Titanic but it did have an interest in two other ships: the USS Thresher and the USS Scorpion. They were US Navy nuclear attack submarines that went missing in the 1960s. The subs location was known as both were found by a team led by Naval Research Laboratory scientist named Chester “Buck” Buchanan shortly after they were sunk, however the Navy wanted more information. With the help of the US Navy-owned but Woods Hole Oceanographic Institute-crewed research ship Knorr and her crew the Navy contracted Ballard to take more intensive pictures in a second look on the lost submarines. It was with the ‘change’ left over on the contract that Ballard took the Knorr to the last location if the Titanic and fished around successfully for her.