Posted on May 8, 2019 by laststandonzombieisland 2 comments

Here we see the Russian steam gunboat Adm. Zavoyko bobbing around in Shanghai harbor sometime in 1921, as you may observe from the local merchants plying their wares. When this photo was taken, she was perhaps the only seagoing member of a Russian fleet on the Pacific side of the globe. Funny story there.

Built at the Okhta shipyard in St. Petersburg for the Tsar’s government in 1910-11, she was named after the 19th century Imperial Russian Navy VADM Vasily Stepanovich Zavoyko, known for being the first Kamchatka governor and Port of Petropavlovsk commander, the latter of which he famously defended from a larger Anglo-French force during the Crimean War.

The riveted steel-hulled modified yacht with an ice-strengthened nose was some 142.7-feet long at the waterline and weighed in at just 700-tons, able to float in just 10 feet of calm water. Powered by a single fire tube boiler, her triple expansion steam engine could propel her at up to 11.5-knots while her schooner-style twin masts could carry an auxiliary sail rig. She was capable of a respectable 3,500 nm range if her bunkers were full of coal and she kept it under 8 knots.

Ostensibly operated by Kamchatka governor and intended for the needs of the local administration along Russia’s remote Siberian coast, carrying mail, passengers and supplies, the government-owned vessel was not meant to be a military ship– but did have weight and space reserved fore and aft for light mounts to turn her into something of an auxiliary cruiser in time of war (more on this later). 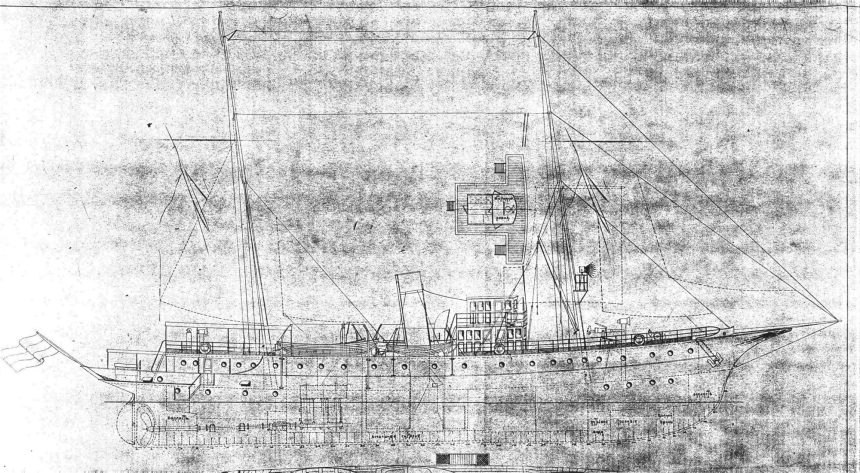 Sailing for the Far East in the summer of 1911, when war was declared in August 1914, the white-hulled steamer was transferred to the Siberian Flotilla (the largest Russian naval force in the Pacific after the crushing losses to the Japanese in 1905) and used as a dispatch ship for that fleet.

Now the Siberian Flotilla in 1914, under VADM Maximilian Fedorovich von Schulz– the commander of the cruiser Novik during the war with Japan– was tiny, with just the two cruisers Askold and Zhemchug (the latter of which was soon sunk by the German cruiser Emden) the auxiliary cruisers Orel and Manchu; two dozen assorted destroyers/gunboats/minelayers of limited military value, seven cranky submarines and the icebreakers Taimyr and Vaigach. As many of these were soon transferred to the West and Arctic in 1915 once the Germans had been swept from the Pacific, our little steamer, armed with machine guns and a 40mm popgun, proved an increasingly important asset used to police territorial waters.

By 1917, with the Siberian Flotilla down to about half the size that it began the war with– and no ships larger than a destroyer– the 6,000 sailors and officers of the force were ripe for revolutionary agitation. As such, Adm. Zavoyko raised a red flag on her masts on 29 November while in Golden Horn Bay, the first such vessel in the Pacific to do so.

She kept her red pennant flying, even as Allies landed intervention forces at Vladivostok. 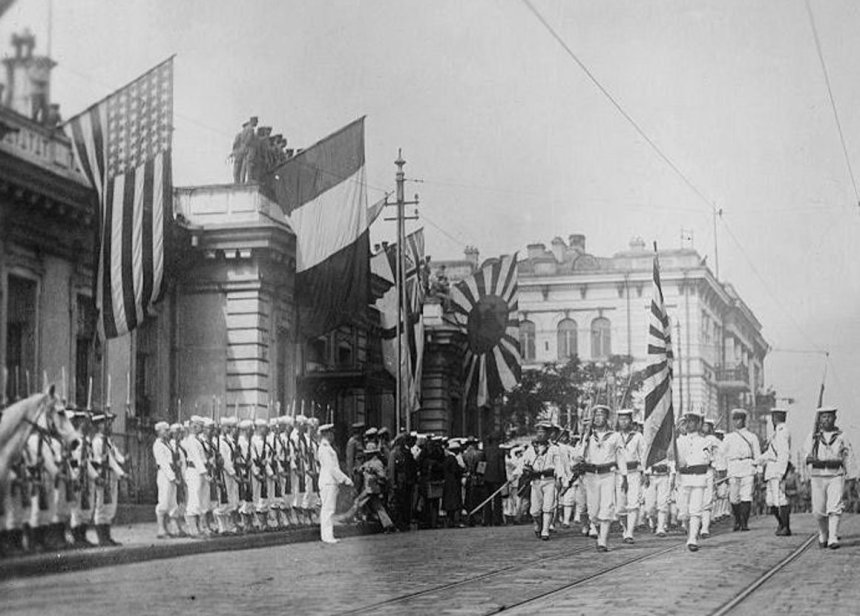 Japanese marines in a parade of Allied forces in Vladivostok before British, French and American sailors, 1918

As for the rest of the Siberian Flotilla, it largely went on blocks with its crews self-demobilizing and many jacks heading home in Europe. The fleet commander, Von Schulz, was cashiered and left for his home in the Baltics where he was killed on the sidelines of the Civil War in 1919.

By then, it could be argued that the 60 (elected) officers and men of the Adm. Zavoyko formed the only active Russian naval force of any sort in the Pacific.

In early April 1920, with the counter-revolutionary White Russian movement in their last gasps during the Civil War, the lukewarm-to- Moscow/Pro-Japanese Far Eastern Republic was formed with its capital in the Siberian port. It should be noted that the FER kind of wanted to just break away from the whole Russia thing and go its own way, much like the Baltics, Caucuses, Ukraine, Finland, and Poland had done already. Their much-divided 400~ representative Constituent Assembly consisted of about a quarter Bolsheviks with sprinklings of every other political group in Russia including Social Revolutionaries, Cadets (which had long ago grown scarce in Russia proper), Mensheviks, Socialists, and Anarchists. This produced a weak buffer state between Soviet Russia and Imperial Japan.

The Far Eastern Republic ran from the Eastern shores of Lake Baikal to Vladivostok and only existed from 1920-23.

Now flying the (still-red) flag of the FER, Adm. Zavoyko was soon dispatched to bring a cache of arms to Red partisans operating against the last armed Whites on the coast of the Okhotsk and Bering Seas.

However, after Adm. Zavoyko left Vladivostok, the local demographics in its homeport changed dramatically. By early 1921, the population of the city had swelled to over 400,000 (up from the 97,000 who had lived there in 1916) as the White Army retreated east. With the blessing of the local Japanese forces– all the other Allies had left the city– the Whites took over the city in a coup on May 26 from the Reds of the Far Eastern Republic. As the Japanese were cool with that as well, it was a situation that was allowed to continue with the Whites in control of Vladivostok and the Reds in control of the rest of the FER, all with the same strings pulled by Tokyo. To consolidate their assets, the Whites ordered Adm. Zavoyko back to Vladivostok to have her crew and flags swapped out.

This put Adm. Zavoyko in the peculiar position of being the sole “navy” of an ostensibly revolutionary Red republic cut off from her country’s primary port. With that, she sailed for Shanghai, China and remained a fleet in being there for the rest of 1921 and into 1922, flying the St. Andrew Flag of the old Russian Navy. There, according to legend, she successfully fended off several plots from foreign actors, Whites, monarchists, and the like to take over the vessel.

By October 25, 1922, the Whites lost their Vladivostok privileges as the Japanese decided to quit their nearly five-year occupation of Eastern Siberia and the Amur region. White Russian RADM Georgii Karlovich Starck, who had held the rank of captain in the old Tsarist Navy and was the nephew of the VADM Starck who was caught napping by the Japanese at Port Arthur in 1904, then somehow managed to scrape together a motley force of 30 ships ranging from fishing smacks and coasters to harbor tugs and even a few of the old gunboats and destroyers of the Siberian Flotilla and sail for Korea with 10,000 White refugees aboard. His pitiful force eventually ended up in Shanghai on 5 December, where it landed its refuges, and then proceeded to sell its vessels (somewhat illegally) in the Philippines the next year, splitting the proceeds with said diaspora. Starck would later die in exile in Paris in 1950. His second in command, White RADM Vasily Viktorovich Bezoire (who in 1917 was only a lieutenant), remained in Shanghai and was later killed by the Japanese in 1941.

As for Adm. Zavoyko, once the FER voted to self-dissolve and become part of Soviet Russia, she lowered her St. Andrew’s flag, raised the Moscow flag, and sailed back home to the now-all-Soviet Vladivostok in March 1923 where became a unit of the Red Banner Fleet– the only one in the Pacific until 1932.

To commemorate her service during the Revolution and Civil War, her old imperialist name was changed to Krasny Vympel (Red Pennant). She was also up-armed, picking up four 75mm guns in shielded mounts, along with a gray scheme to replace her old white one. 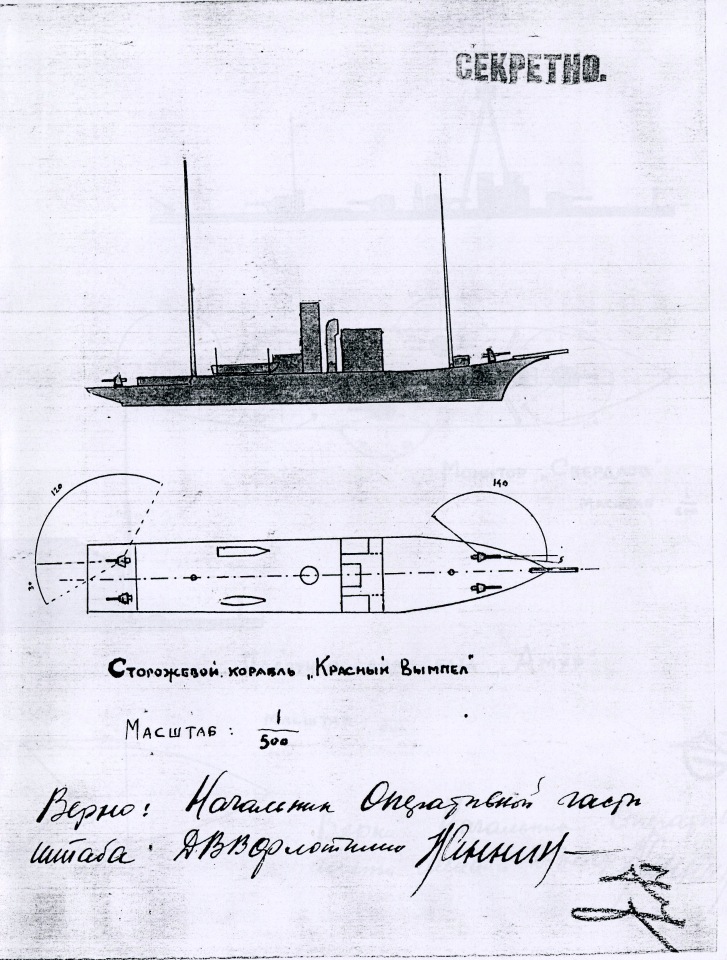 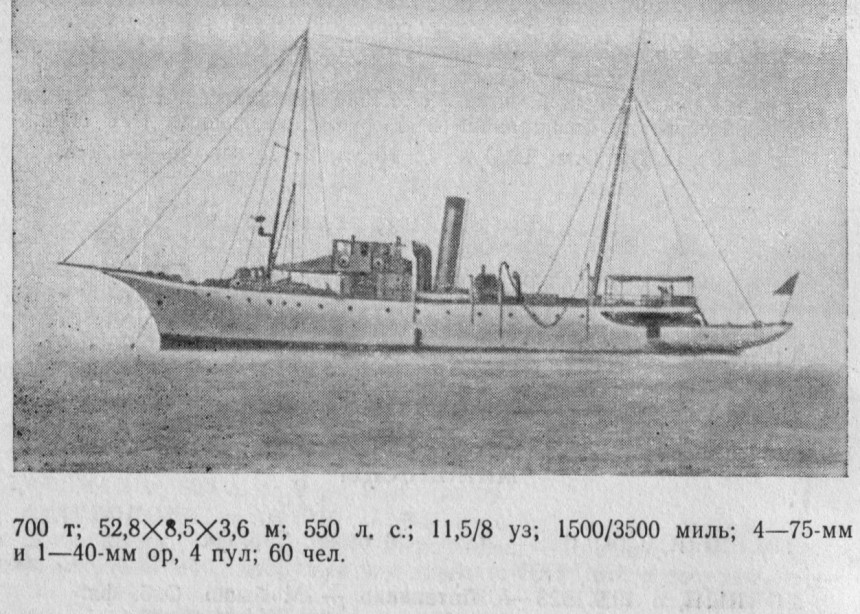 For the next several years she was used to fight pockets of anarchists and White guards that persisted along the coast, engage stateless warlords, pirates, and gangs along the Amur, and shuffle government troops across the region as the sole Soviet naval asset in the area. She also helped recover former Russian naval vessels towed by the Japanese to Northern Sakhalin Island (where the Japanese remained in occupation until 1925).

In 1929, she stood to and supported the Northern Pacific leg of the Strana Sovetov (Land of the Soviets) seaplanes which flew from Moscow to New York. After that, with her neighborhood quieting down, she was used for training and coastal survey work but kept her guns installed– just in case.

Tupolev TB-1 Strana Sovyetov floatplane, 1929. The two planes would cover some 21,000 km to include a hop from Petrovavlask to Attu, which our vessel assisted with.

During WWII, with the revitalized Soviet Pacific Fleet much larger, Adm. Zavoyko/Krasny Vympel kept on in her role as an armed surveillance vessel and submarine tender, occasionally running across and destroying random mines sewn by Allied and Japanese alike.

In 1958, after six years of service to the Tsar, five years to various non-Soviet Reds, and 35 to the actual Soviets, she was retired but retained as a floating museum ship in her traditional home of Vladivostok in Golden Horn Bay. 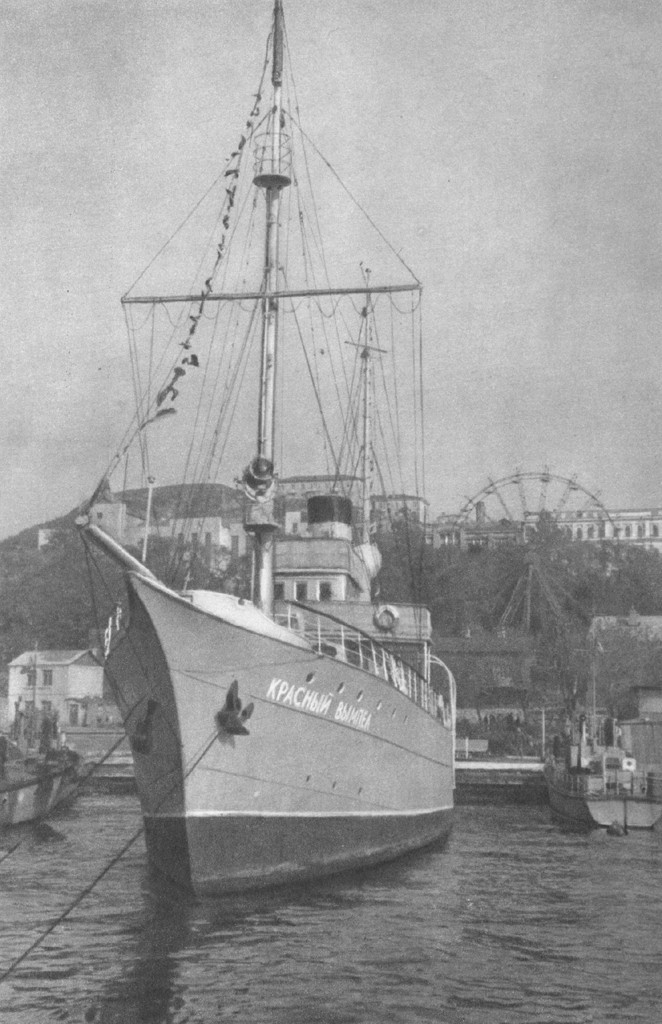 Today, she remains a popular tourist attraction. She was extensively rebuilt in 2014 and, along with the Stalinets-class Red Banner Guards Submarine S-56 and several ashore exhibits, forms the Museum of Military Glory of the Pacific Fleet.

She has been the subject of much maritime art:

As well as the cover of calendars, postcards, pins, medals, and buttons. 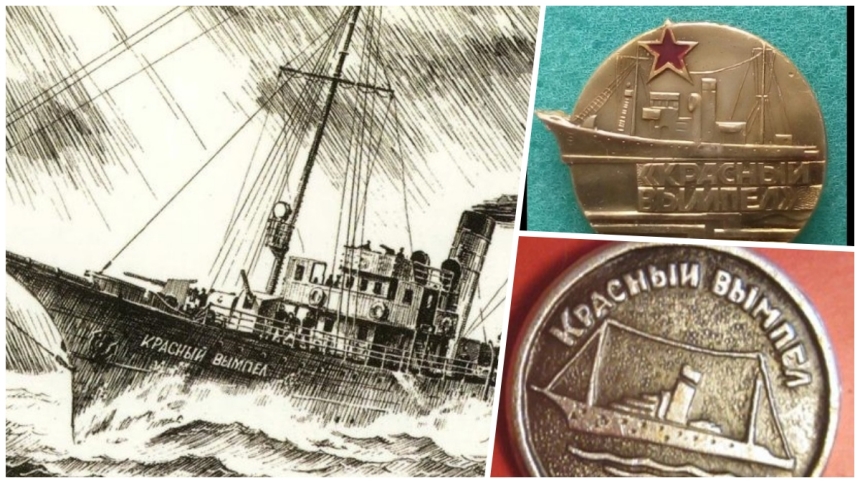 You can find more photos of the vessel at Fleetphoto.ru (in Russian) and at the Vladivostok City site