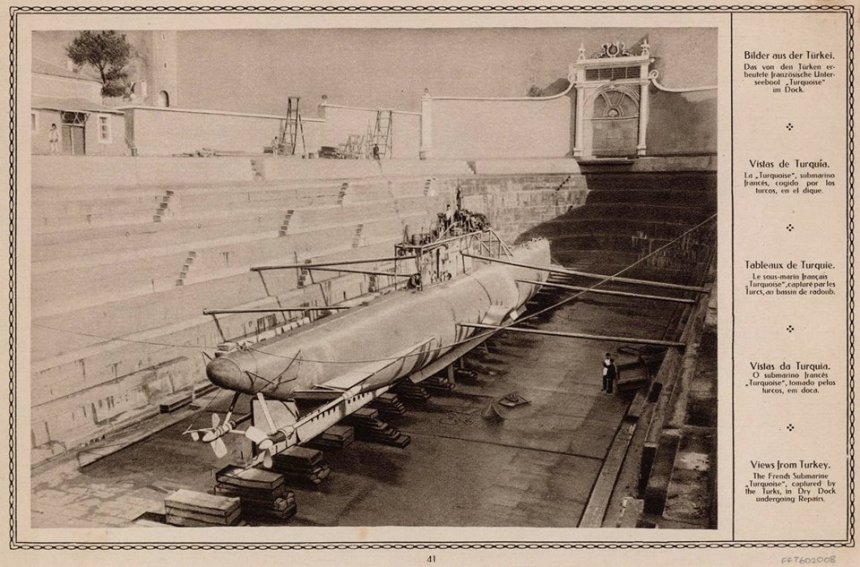 The French got into the submarine business about the same time as the Americans, launching Admiral Simeon Bourgois’s Plongeur in April 1863.

Before the turn of the century, the Republic had flirted with a half dozen one-off boats before they ordered the four boats of the Sirene-class in 1901 followed quickly by another four of the Farfadet-class, the two Algerien-class boats, 20 Naiade-class craft in 1904, Submarines X, Y and Z (not making it up), the two ship Aigrette-class and the submarine Omega.

All told, between 1900-1905, the French coughed up 36 submersibles spread across nine very different classes.

After all that quick learning curve, they proceeded with the Emeraude (Emerald) class in 1903. These ships were an improvement of the Faradet (Sprite) class designed by Gabriel-Émile-Marie Maugas. The 135-foot long/200-ton Faradet quartet had everything a 20th Century smoke boat needed: it was a steel-hulled hybrid submersible that used diesel engines on the surface and electric below, had 4 torpedo tubes, could dive to 100~ feet, and could make a stately 6-knots. 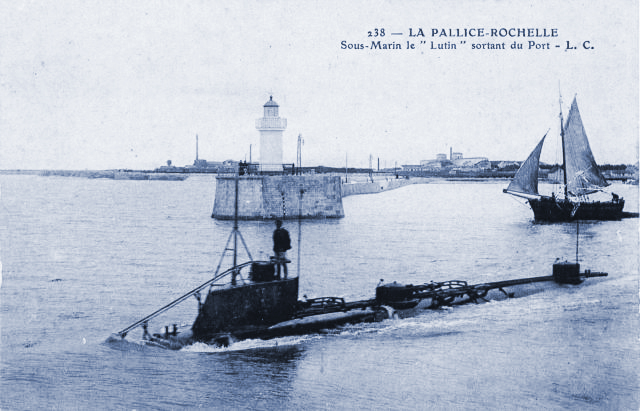 While they weren’t successful (two sank, killing 30 men between them) Maugas learned from early mistakes and they were significantly improved in the Emeraudes. These later boats used two-shaft propulsion– rare in early submarines–and were 147-feet long with a 425-ton full load. Capable of making right at 12-knots for brief periods, they carried a half dozen torpedo tubes (four in the bow and two in the stern). They also could mount a machine gun and light deck gun if needed.

Profile of the Emeralds surfaced.

Class leader Emeraude was laid down at Arsenal de Cherbourg in 1903 followed by sisters Opale and Rubis at the same yard and another three, Saphir, Topase, and the hero of our story, Turquoise, at Arsenal de Toulon in the Med.

Turquoise was commissioned 10 December 1910 and, with her two Toulon-built sisters, served with the French Mediterranean Fleet from the Submarine Station at Bizerte.

She repeated the bad luck of the Farfadet-class predecessors and in 1913 lost an officer and several crew swept off her deck in rough seas.

When war erupted in 1914, the jewel boats soon found they had operational problems staying submerged due to issues with buoyancy and were plagued by troublesome diesels (hey, the manufacturer, Sautter-Harlé, was out of business by 1918 so what does that tell you).

To help with surface ops, Topase and Turquoise were fitted with a smallish deck gun in 1915.

Saphir probably would have been too, but she caught a Turkish mine in the Sea of Marma on 15 January trying to sneak through the straits and went down.

Topase and Turquoise continued to operate against the Turks, with the latter running into trouble on 30 October 1915. Around the village of Orhaniye in the Dardanelles near Nagara there were six Ottoman Army artillerymen led by Corporal G Boaz Deepa who spotted a periscope moving past a nearby water tower.

Becoming tangled in a net, the submarine became a sitting duck. With their field piece, they were able to get a lucky shot on the mast, and, with the submarine filling with water, she made an emergency surface. There, the six cannoneers took 28 French submariners captive and impounded the sub, sunk in shallow water.

Turquoise’s skipper, Lt. Leon Marie Ravenel, was in 1918 awarded the Knight of the Legion of Honour as was his XO. These sailors suffered a great deal in Turkish captivity, with five deaths. 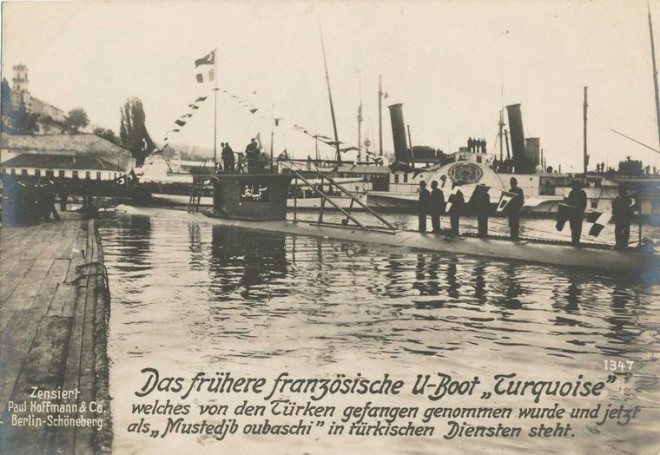 The Turks later raised the batter French boat and, naming her Mustadieh Ombashi (or Müstecip Ombasi), planned to use her in the Ottoman fleet.

The news of her capture and use under new management flashed through the Central Powers. This from the Austrian archives:

Ottoman Uniforms reports her conning tower was painted with a large rectangle (likely to be red), with the large white script during this time.

However, as submariners were rare in WWI Constantinople, she never took to sea in an operational sense again and in 1919 the victorious French reclaimed their submarine, which they later scrapped in 1920.

Her wartime service for the Turks seems to have been limited to taking a few pictures for propaganda purposes and in being used as a fixed battery charging station for German U-boats operating in the Black Sea.

As for the last Bizerte boat, Topase, she finished the war intact and was stricken 12 November 1919 along with the three Emeraudes who served quietly in the Atlantic. 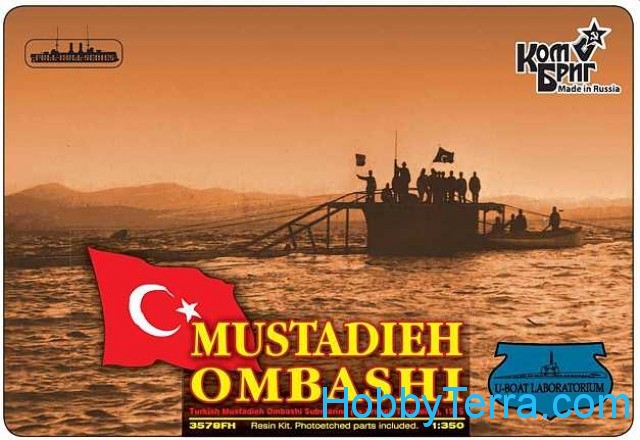 If you have a further interest in the submarines of Gallipoli, go here.